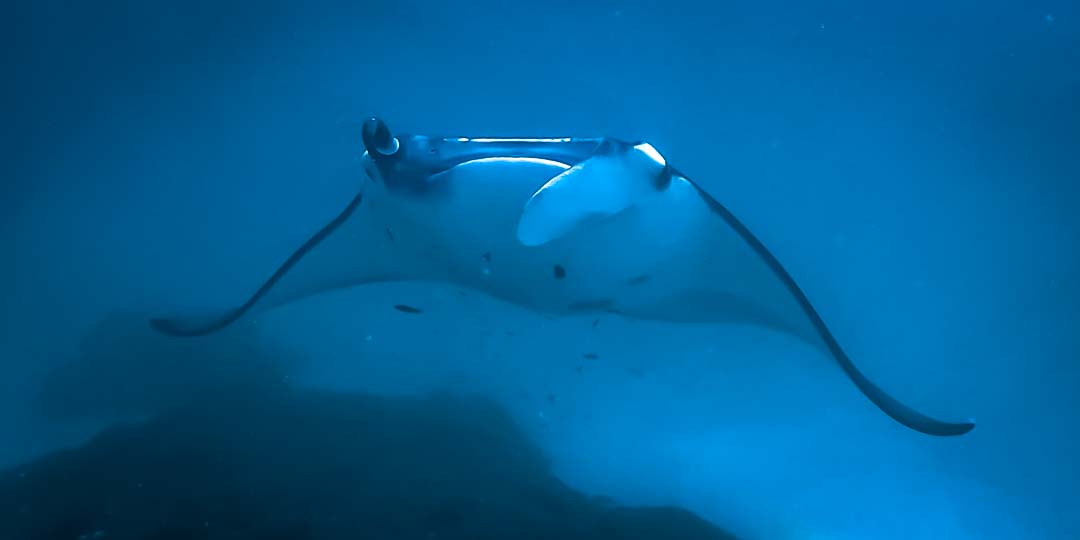 Hello everyone !  I’m writing this report from Belgium, as my amazing experiment at Landaa Giraavaru has come to an end…

Although I enjoyed my first month at Landaa, my second month began with the accomplishment of one of my biggest dreams … swimming with mantas! All of that was possible because of the Manta Trust team, working with us in the Marine Discovery Centre on the Manta’s Identification Programme. All I know of mantas, except basic facts such as their phylum etc., is because of those guys, always talking with passion and having a true objective and global vision for the conservation of mantas. So, joining the ‘Manta-on-Call’ excursion my dream finally came true. Close to Landaa Giraavaru there’s a unique spot to see mantas called Hanifaru Bay, a Marine Protected Area (MPA). Here, planktons are trapped and so accumulate to create a really good feeding spot, with an elaboration of cleaning stations where mantas, in a symbiotic relationship, are getting rid of bacteria growing in the mouth and gills.  I’ll especially remember a free dive to see them more clearly, when a manta ray swam straight towards me and stopped only two or three metres in front of me before going away to the cleaning station. Clearly one of the top moments of my stay!

My Fish Lab work went really well, and we produced a few nice hatchlings of clownfish with a high survival rate. This is great news for the wild, as the objective of the Fish Lab is to reduce pressure on wild stocks by producing individuals to limit the fish industry impact on clownfish, highly sought after since the success of the animated films ‘Finding Nemo’ and ‘Finding Dory’. 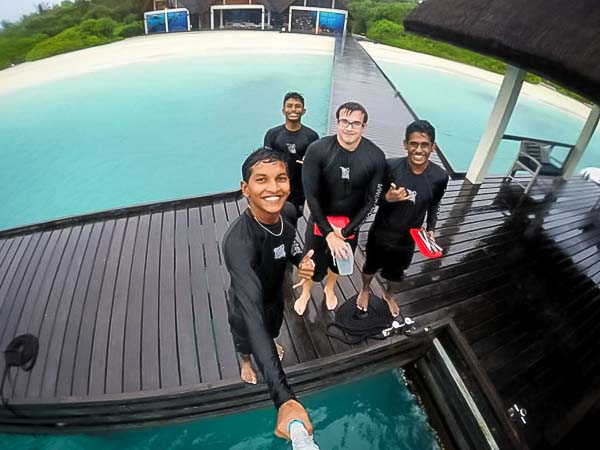 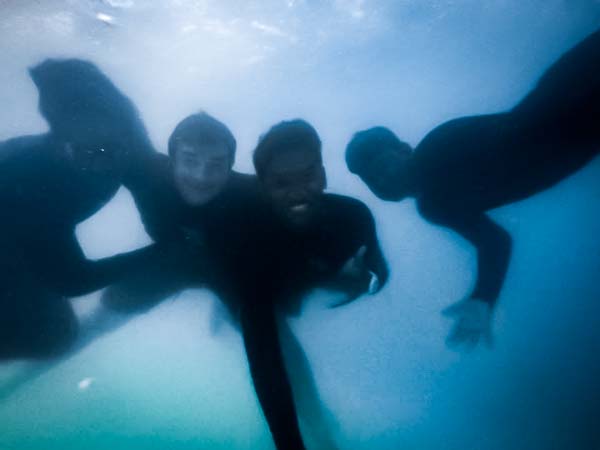 It was a busy month for our Turtle Rehabilitation Centre. To speak about the sad part first, we received a turtle from Kuda Huraa, to treat an infection-inducing necrosis of the front right flipper. A few days later, having eaten almost nothing despite our best efforts at force feeding, she sadly died. But we can’t save every turtle we receive, and autopsy results suggest that she died of exhaustion whilst fighting the disease.

We’re helping a lot of turtles, demonstrated with the release of the two Olive Ridley turtles, Faaz and Molly. Faaz was already in residence when I arrived, and made amazing progress on his diving skills, able to swim fast and without any issues. On release day, he managed to swim really quickly in the offshore direction. The other one we released is Molly. I’m happy to have been there for this release because I was there when she arrived, and I was able to notice all the progress she made during her time with us. Upon admittance to our Centre, she was dehydrated and suffered from two strong lacerations on a front and rear flipper. As turtles generally need to be released with at least three flippers to give them the best chance of survival, the fact that we needed to amputate the rear flipper to prevent any further risk of infection was a tough decision as her front laceration was quite severe. Thankfully, the Olive Ridley Project vet came to give her stitches, which helped a lot. As time went on, Molly started to recover from her buoyancy syndrome and gained more movement, with her wound starting to heal nicely. Once her laceration was fully healed, we decided to release her as she was diving properly and catching food easily.

Of course, these aren’t our only turtles, but it would take days to write everything I experienced and shared with these animals, as you manage to quickly become attached to them all. The penultimate part of the story I want to tell you is my experience with Beybe, a majestic male Olive Ridley who was unlucky as he had been trapped inside ghost fishing nets that had deeply cut his front two flippers, rendering him unable to move them. He was buoyant and even with physiotherapy sessions twice a day to stretch his flippers, we didn’t notice any significant improvement in his condition. But once we managed to finally give him a lot of space in the big pool after the departure of some other turtle residents, the next day (the day I left) we saw him peacefully swimming at the bottom of the pool as if he had never been buoyant in the first place … an amazing sight! Maybe an intervention will be planned to try to reduce the scar tissue tightness over one of the flippers, making him a potential candidate for release later in the future.

Finally, Elsa, one of the cutest turtles I ever saw… I feel the need to report this story to you because I can quickly talk to you about the Flying Turtle Programme, which uses turtles unable to be released as ambassadors to show the public in Europe the risks these animals face in the wild from ocean pollution. We needed to collect some faeces samples and spent days watching her, to attempt to collect some poop! She is now at Saint-Petersburg, living happily in a far larger tank with a lot of biodiversity. Good luck Elsa. 🙂 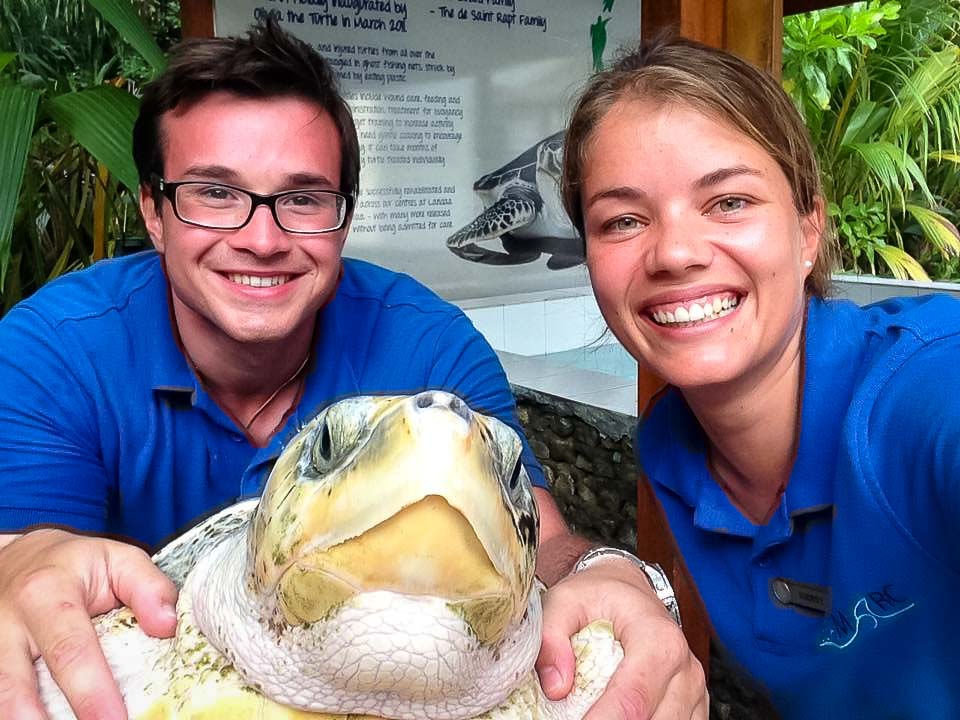 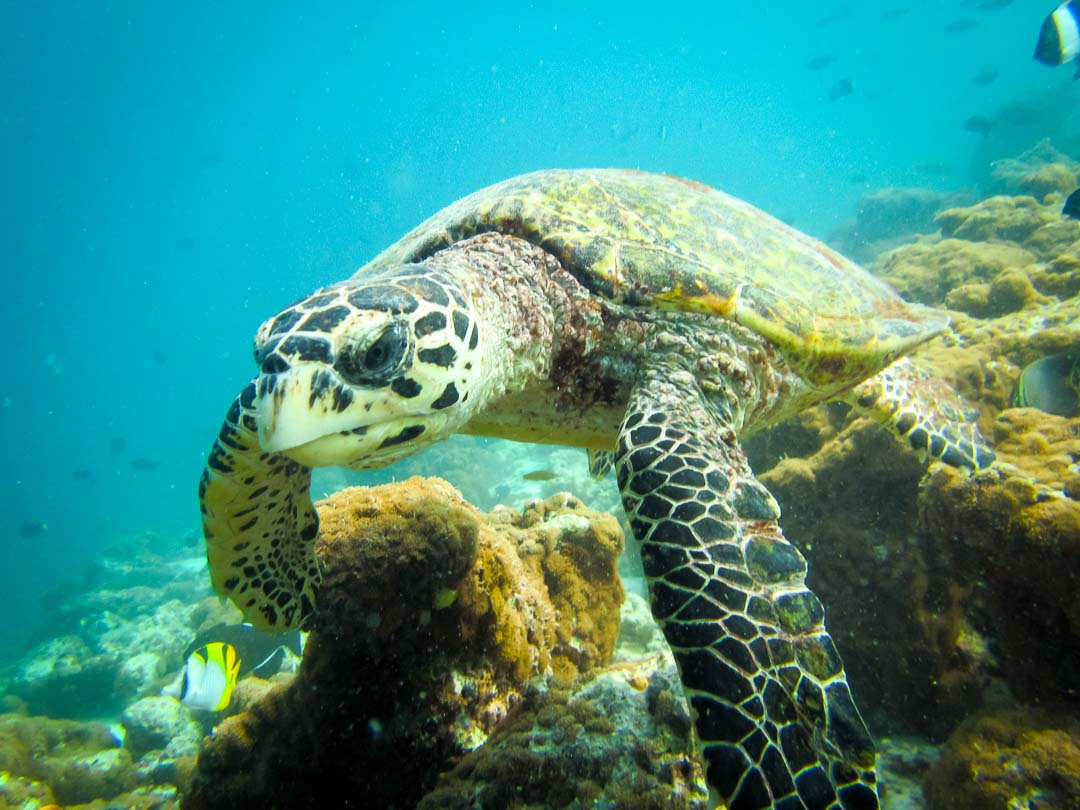 For my project, I managed to collect around 90 samples which should be enough to have an idea of the species repartition and to establish a nice comparison before and after a bleaching event. I’ve started the process of DNA extraction and, though it’s quite hard and time consuming, it is completely worth it because the services corals give us are completely free! (More about our Coral Taxonomy project).

I really would like to thank one last time all the people who made this experiment unique. The Marine Discovery Centre and the Manta Trust team, as I’ve probably spent more time with them than anyone else and it was always enjoyable, the recreation team and the young apprentices, always ready to have some fun in the respect of the work. Thank you everyone … you’re all amazing!

See you another time, another place!
Grégory 🙂 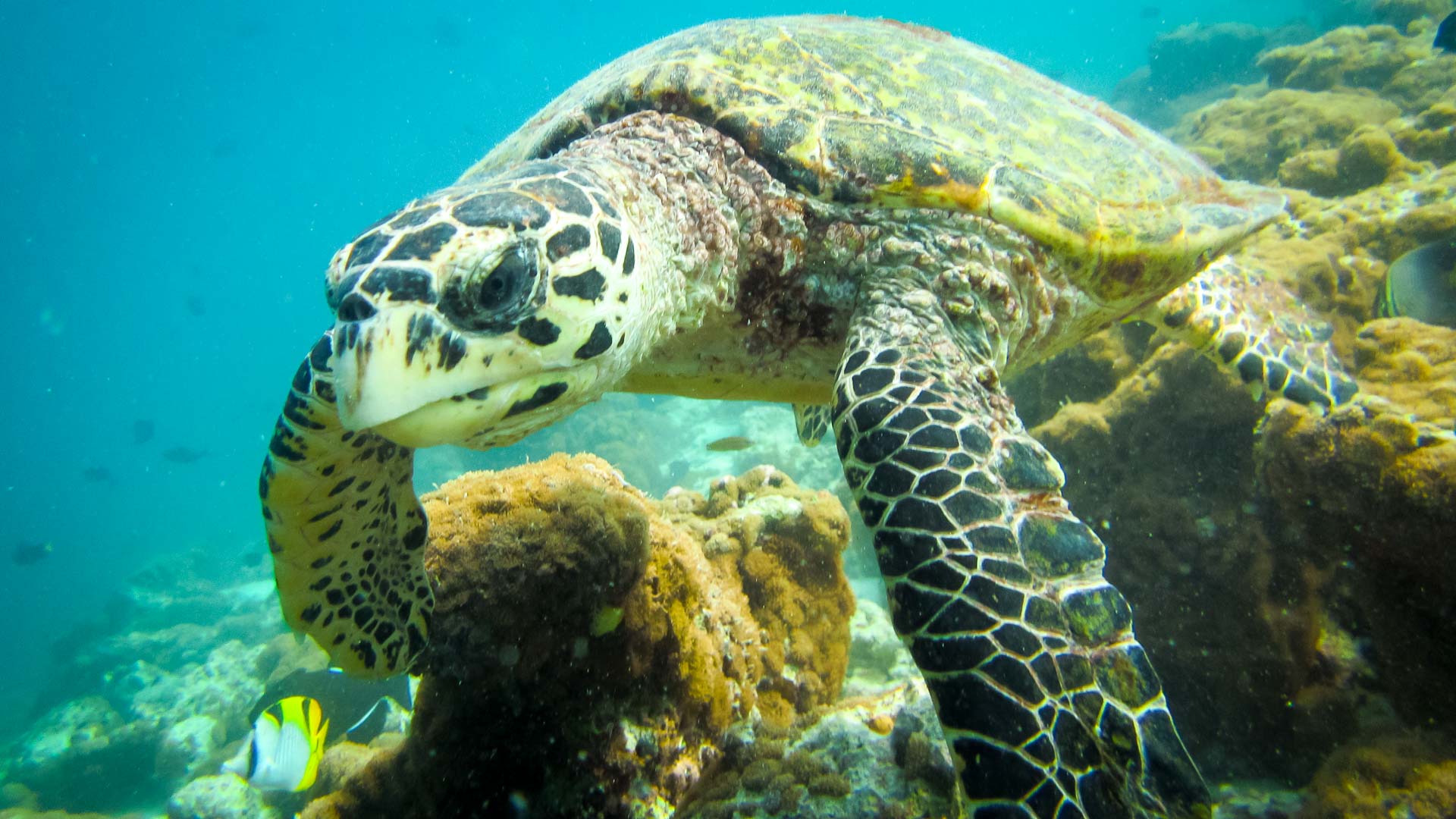