This large adult male was found floating, entangled in a fishing net unable to dive. Beybe was freed and assessed on site by staff from Meeru Island resort and transported directly to our Marine savers facility at Four Seasons Kuda Huraa. It is likely that he had been trapped in this debris for many days, which caused deep lacerations to his neck and front flippers. Despite his large size, Beybe proves to be a gentle soul and is currently receiving regular wound care and fluid therapy to give him the energy he needs.

Beybe’s progress in the first week has been encouraging, making many successful attempts to dive below the water’s surface and even taking an interest in food! We hope he will be able to return to the wild in the coming months once he has returned to a healthy condition.

May 2017
The scar tissue around Beybe’s front flippers has become very tight, restricting circulation. As a result, he rarely uses them and relies heavily on his rear flippers to swim around the pool. He is receiving regular physio and massages to alleviate the swelling, as well as adiflam injections to reduce any internal inflammation.
The severity of Beybe’s wounds have meant that both of his injured front flippers have become very swollen and immobile. Our large adult Olive Ridley has now been relocated to our facility at Landaa Giravaru to be closer to the vet who will be able to further assess his condition and co-ordinate any surgeries he may need. His journey to Landaa was a long one via our supply dhoni from Male to the resort. Despite a few escape attempts initially, Beybe was wrapped in towels and taped, to minimize inflicted damage and to help keep him calm during his overnight trip. He made it without any logistical problems, and was in high spirits upon arrival. Thankfully the vet concurred that Beybe should make slow improvements with the treatment plans we are currently implementing. We hope that these daily physio sessions and use of anti-inflammatories will start to mobilize his flippers and speed up his recovery. 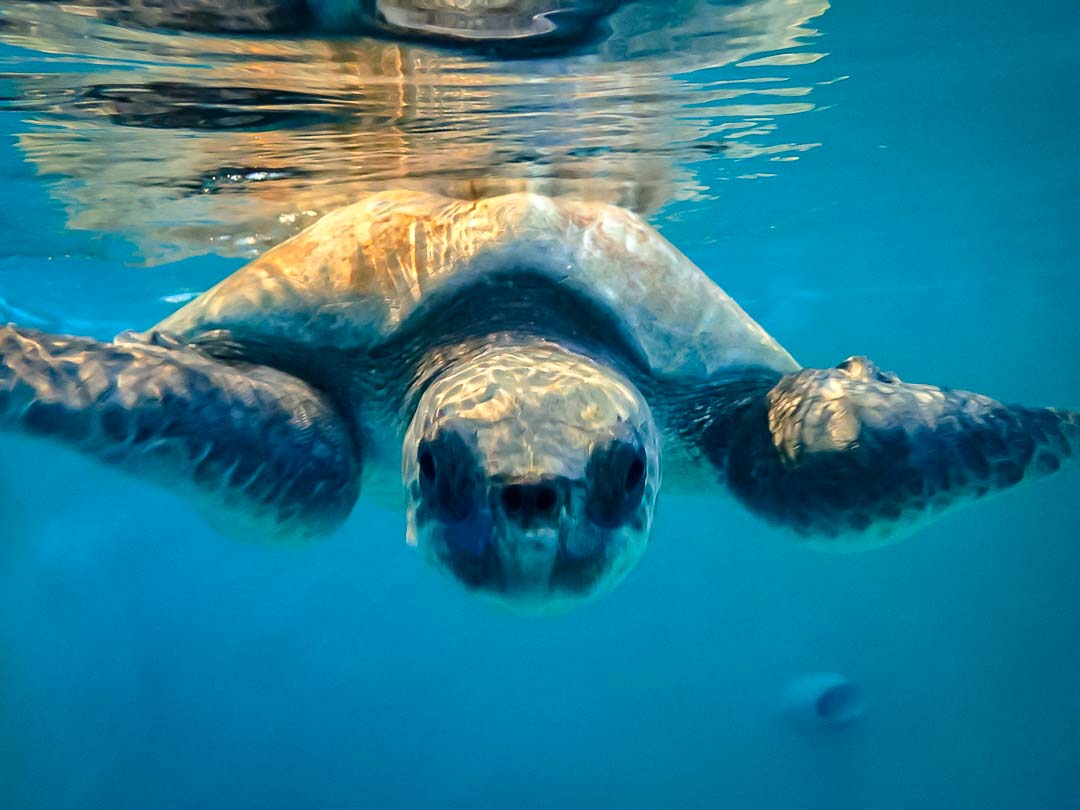 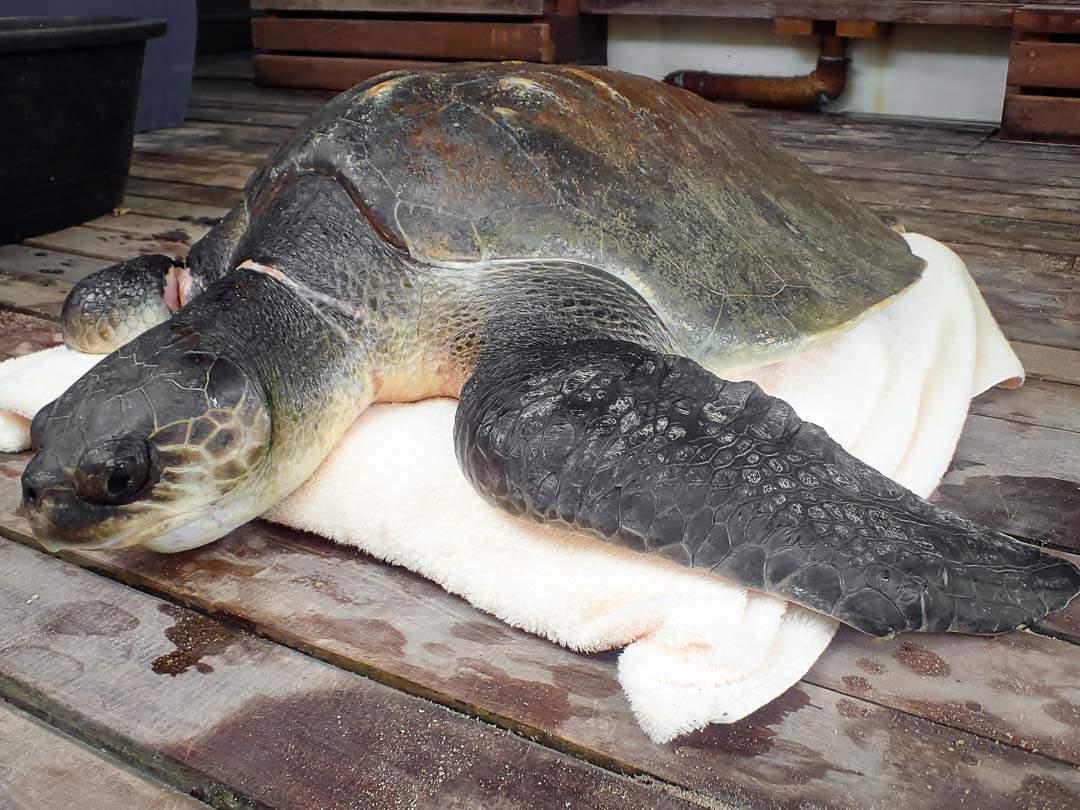 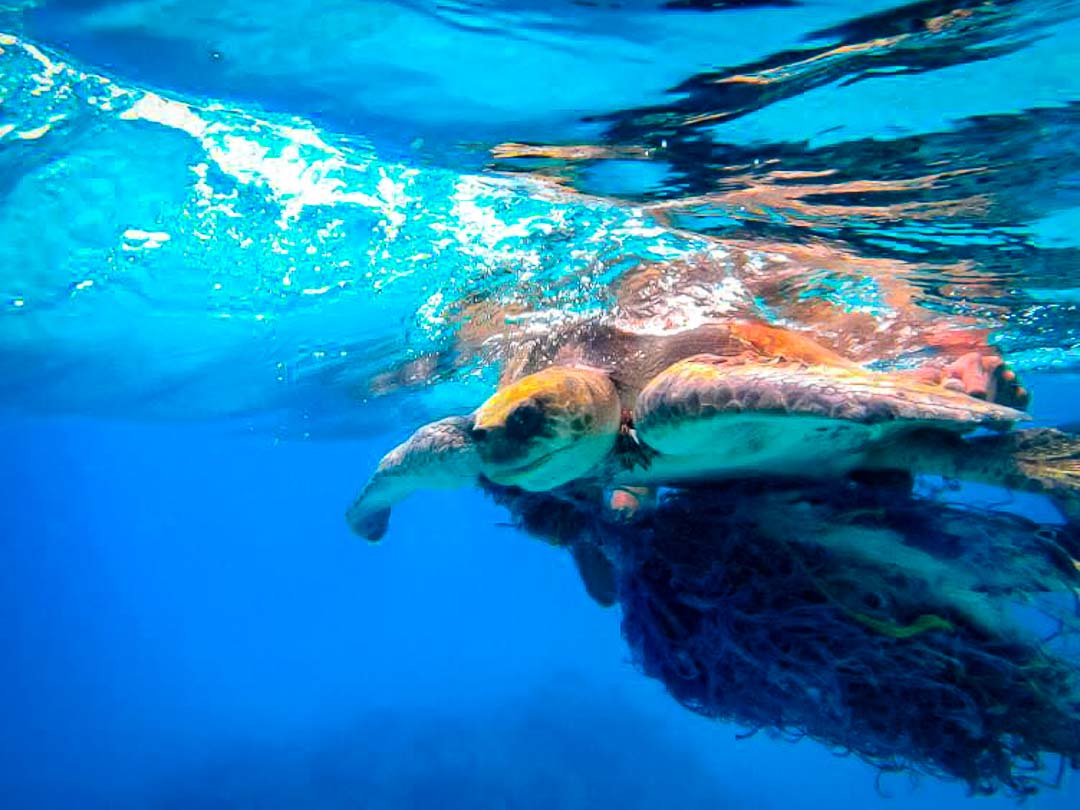 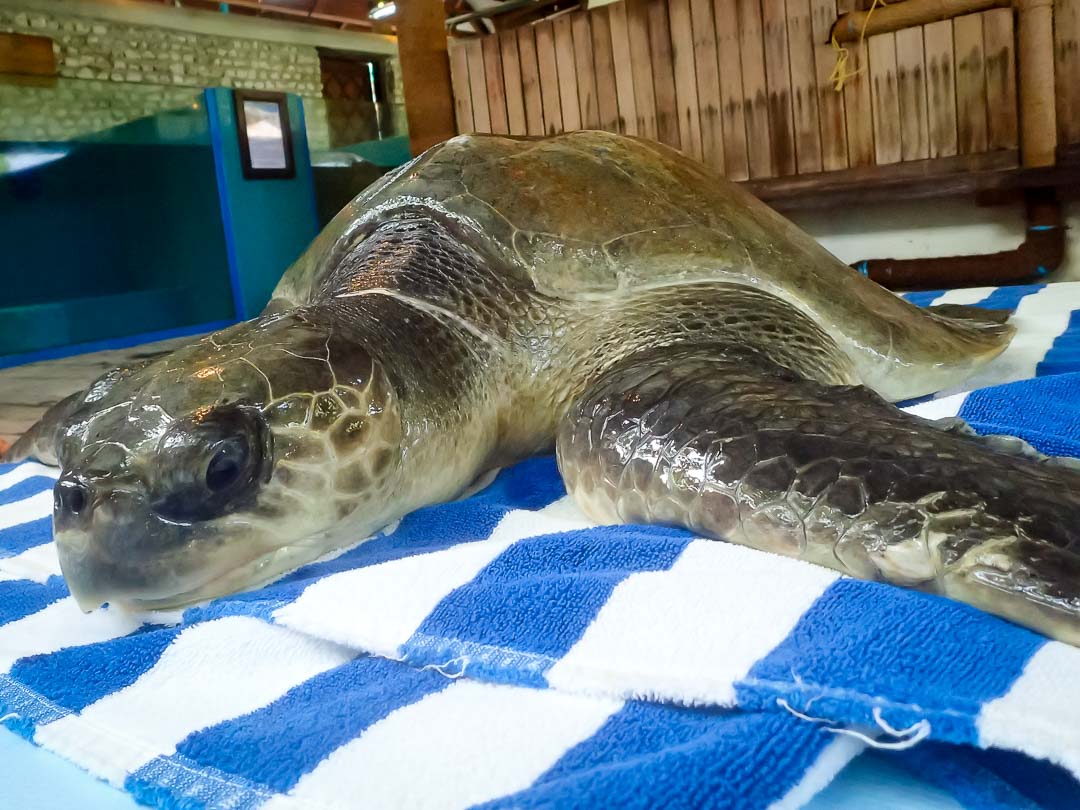 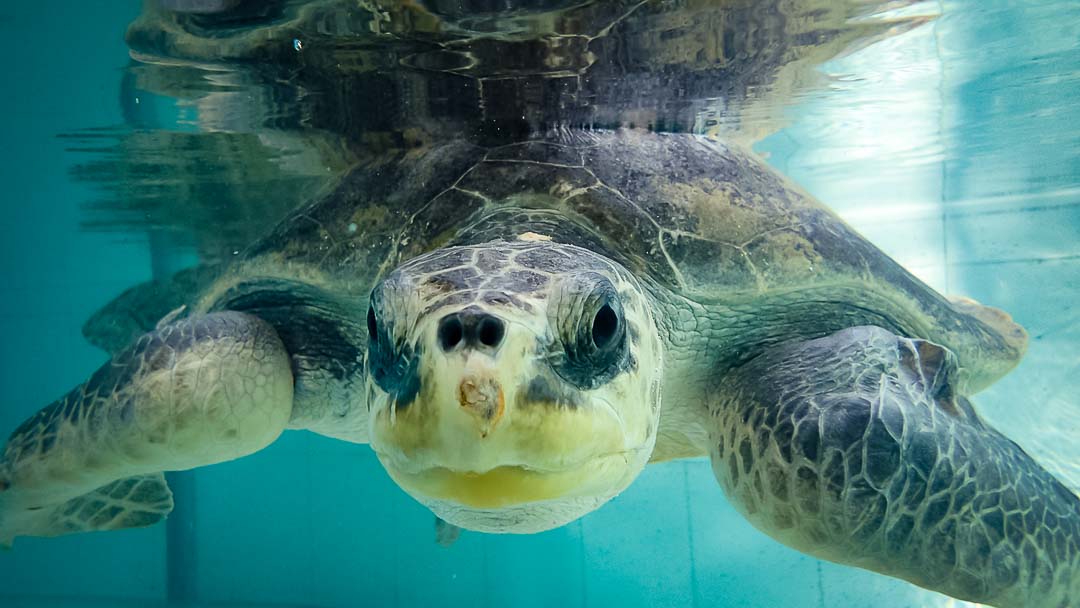 Beybe seems to be making small progressions in his physiotherapy; the range of motion in his right flipper has increased, however he continues to rely on his back flippers around the pool. We plan to immobilise his back flippers during feeding times to assess his swimming ability. Although he doesn’t choose to dive often, he proved to be able to once again on the 20 September when he managed to get under the gap of the barrier between two pools.

Beybe has not shown much progress in his recovery this month, and has been using only his back flippers to swim around the pool. During the physiotherapy sessions, we could feel him using his muscles to resist a little bit at the beginning of the session but as soon as we immobilised his back flippers, he stopped trying to move his front ones. We did not see him diving this month, perhaps because the pool size was reduced to welcome new residents.

Beybe still is using only his back flippers to swim around the pool, and we have not observed him diving, so we are continuing physiotherapy (twice daily for ten minutes).
Beybe was recently taken out into the open lagoon for a 30 minute swimming session, and we plan to repeat this each week to encourage him to use his front flippers.

Beybe started to develop fungal infection on his plastron and it is being treated with an antibiotic, anti-bacterial, anti-fungal cream. He is still getting swimming lessons twice a week in the ocean. 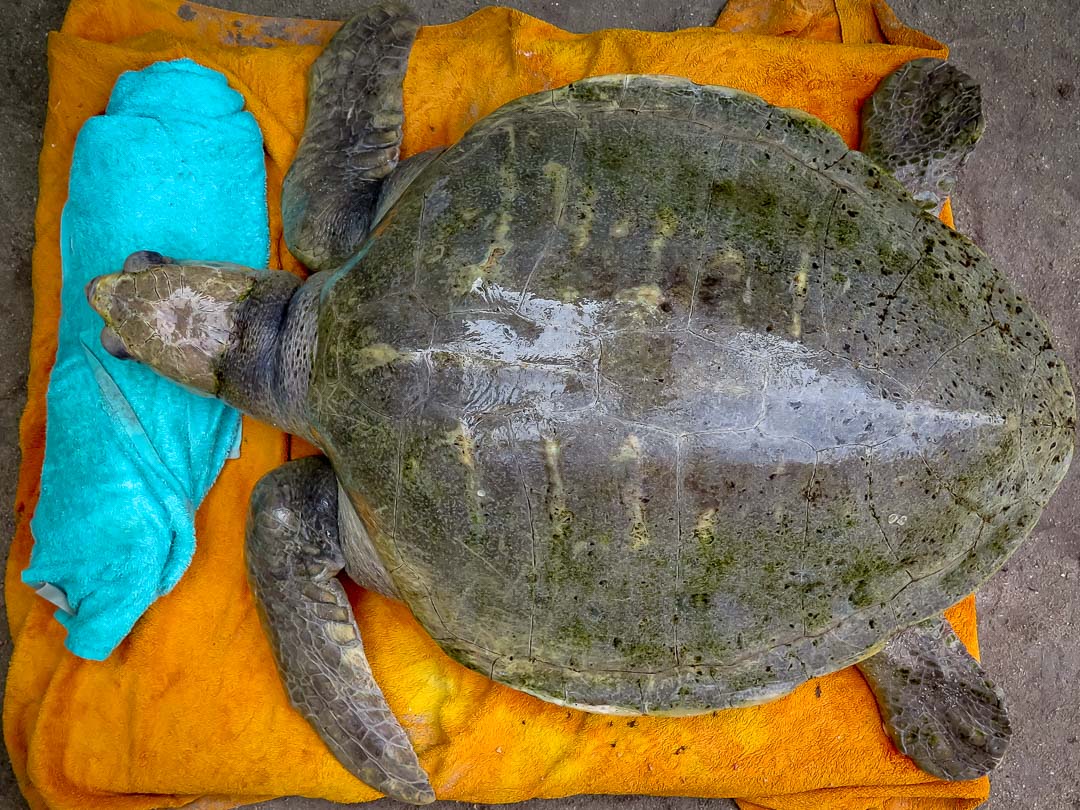 Beybe still is using only his back flippers to swim around the recovery pool; we are continuing physiotherapy (twice daily for ten minutes). He is diving for his food in the long shallow pool, but not in the smaller deeper pool.
Beybe is taken out to the lagoon twice a week for 30 minutes to one hour, however he only dives occasionally, and sometimes just floats at the surface with no enthusiasm to even swim. He is still being treated for a fungal infection.
On the 30 January, Beybe joined Pumpkin Pie on an outing to the lagoon, and that seemed to motivate him to swim more actively.

Beybe still is using only his back flippers to swim around the pool, but can dive for his food. We are continuing the physiotherapy sessions (twice daily for ten minutes) and the lagoon exercise (twice a week for 30-60 minutes) but his enthusiasm is low.
He has not been feeding well recently, so we will change his antibiotic medication and may need to start tube-feeding.

Have you ever wonder how an X-ray of turtle looks? This is Beybe one of our Adult Olive Ridley turtles! 🐢 . . . . #conservation #rehab #rescue #x-ray #fsmaldives #conserve #seaturtle #oliveridley #staysalty #species #stranding #nature

Beybe’s health is decreasing. The X-Rays showed broken bones on the front flippers and inside his body, so we have stopped physiotherapy sessions. He now refuses to open his beak, so we have been force-feeding him a few times with fish paste, and giving fluids daily. We are administering new antibiotics, pain killers and calcium medication. He has lost a lot of weight, down from 34.1kg to 27.1kg.
We have moved Beybe in with Juanita and Vela in the long shallow pool, and we are still taking him out for swims twice a week (he seems a little more active in the ocean).

Sadly, Beybe died today. He had been sick for several weeks, had stopped eating and lost more than 5kg in weight. He will be missed by the whole team.