Use your mouse to navigate & zoom the map.
Click on the icons and traces for more details, and toggle the display with menu button (top left of map).

Raai is an adult male Olive Ridley turtle, rescued from entanglement in a ghost net (discarded fishing gear). After care and treatment at our rescue Centre, including 3 weeks in our ocean enclosure, he regained his ability to dive and rest comfortably on the bottom netting. On 14 August 2021, he was successfully released from the beach with a satellite tracking tag (ignore the Indonesia data point!)

Raai successfully transmitted his 5049 km journey for a total of 132 days. The last signal was received on 16 December, towards to the Nicobar Islands (India). He spent many days circling around the Bay of Bengal area, which could mean it’s a feeding ground. The cease in transmission probably means the device detached from the shell (and sunk to the ocean floor), or the sensors gradually became covered by epibiota.

Historical Data – some of our satellite-tagged turtles from 2012 onwards

Use your mouse to navigate & zoom the map.
Click on the icons and traces for more details, and toggle the display with menu button (top left of map).

Read the full story of Shakti’s rescue, recovery and release during 2020.

Shakti was admitted to our turtle rescue centre on 8 May, and following surgery, treatments and lots of care, she was successfully released back into the ocean on 26 July 2020. Shakiti was successfully tracked from 26 July to 7 November 2020 (a total of 105 days).

SAWAN (blue) – a young Olive Ridley turtle rescued on 18 January 2016 by the Lambert Family. Sawan was entangled in a large ghost net on the sand bank at Landaa Giraavaru. Sawan was in overall excellent condition and was released after the attachment of a satellite tag generously donated by Dusit Thani Maldives.

OLIVIA (red) – Olivia was found on 23 January 2011 by Landaa Giraavaru’s dive team. She was drifting at the surface with a serious head injury. After a long recovery at the rehabilitation center, she was finally released on the 7 of February 2012.

OLIVER (pale blue) – found in July 2012 and released in September (report, photos & video). The last transmission was on 13 March 2013. Oliver’s tag may have problems with fouling (being covered in algae or barnacles), which could explain the intermittent signal. We tracked Oliver for over five months – a total of 4,488 km in 169 days! In the final days of transmission, Oliver was travelling northwest of the Maldives in the Arabian Sea.

CHIPPY (orange) – a 68cm female Olive Ridley turtle, rescued in July and released in November 2012. We lost transmission from her on 16 June 2013. During her last few weeks of transmission, Chippy was travelling SE towards the Lakshadweep islands. Her last signal was 350km NW of the Lakshadweep Islands and 1100km away from the Maldives. Chippy travelled more than 5500km in 220 days, making her our longest tracked turtle with more than seven months of data!

SAMSY (blue) – a 71cm mature female Olive Ridley turtle, rescued & released in December 2012. After receiving a strong signal from Samsy for almost six months, we lost her signal on 11 June 2013. She was released on 17 December 2012 and travelled more than 6,000km in 176 days – our furthest travelled turtle! In the last few weeks of her transmission, she had returned to the Lakshadweep islands (where she had spent some time in January) and the last signal was 50km east of the northernmost Lakshadweep atoll and 300km west of Karnataka province, India.

DHINKO – a two-year old Green Turtle (previously being kept as a pet on a local island), released on 8 November 2013 (report & slideshow). She travelled North in the channel between Noonu and Raa atolls, and then spent some time in Shaviyani atoll. Dhinko travelled a total of 307km in one month, and was last seen in Shaviyani atoll close to Dhigurah sandbank. The tag then stopped transmitting – it may have fallen off, or the battery may have failed. Another more worrying scenario, made possible by her last known location being close to an inhabited island (that of Komandhoo), is that someone may have captured her and broken the tag.

AKUA – a 63cm female Olive Ridley Turtle, rescued 22 August 2013 – and – released 27 October (report & slideshow). Akua travelled differently to other Olive Ridley turtles we have released, by spending much more time actually inside Maldivian waters. This is probably due to the unsettled weather over the last two months. Around 200km west of the Maldives, she turned NW and was last located 300km WNW of Baa atoll, travelling towards the northern Indian Ocean. Akua travelled 1,600km in 91 days and was last tracked on 20 January 2014, ~300km NW of the Maldives, heading NW following similar routes to Chippy (yellow), Samsy (dark blue) and Oliver (aqua) following the strong predominating NW currents.

ISABELLA (red) – Isabella is one of two Olive Ridley turtles found in a drifting ghost net on 31 March 2015 (in the channel between Landaa and Kamadhoo). She was freed from the net and kept in our rehabilitation centre for a few days, to ensure sure she was in good health. She was released on 5 April 2015 (video), at the same time as Sofia. Isabella has travelled an impressive 2,433km since release, and now seems to have come full circle towards the Maldives again.

SOFIA (orange) – Sofia was found on 31 March 2015, entangled in a ghost fishing net (in the channel between Landaa and Kamadhoo). She was freed from the net and kept in our rescue pools for a few days, where she was fed and monitored closely. She was released on 5 April 2015 (video), at the same time as Isabella, and started to head south before turning north, out of Baa Atoll. Sofia is currently to the East of Sri Lanka, and has swam over 2,200km so far. Sophia stopped transmitting on 2 July as he was cruising along the south coast of Sri Lanka. Transmissions can be lost because the satellite tracking device falls off, or becomes covered by algae/shells that disrupt transmission to the satellite.

RISHI (green) – is an adult male (rarely seen!) Olive Ridley turtle, found entangled on 2 April 2015 in a drifting ghost fishing along with an incredible 6 other turtles. He was thankfully only suffering from slight lacerations to his back left flipper, and a problem with buoyancy (floatation), and so after a brief rehabilitation Rishi was successfully released on 10 April 2015. We unfortunately lost the tracking signal for Rishi on 23 June. He had clocked up 1730km, and was last to be found off the coast of India (Kochi). 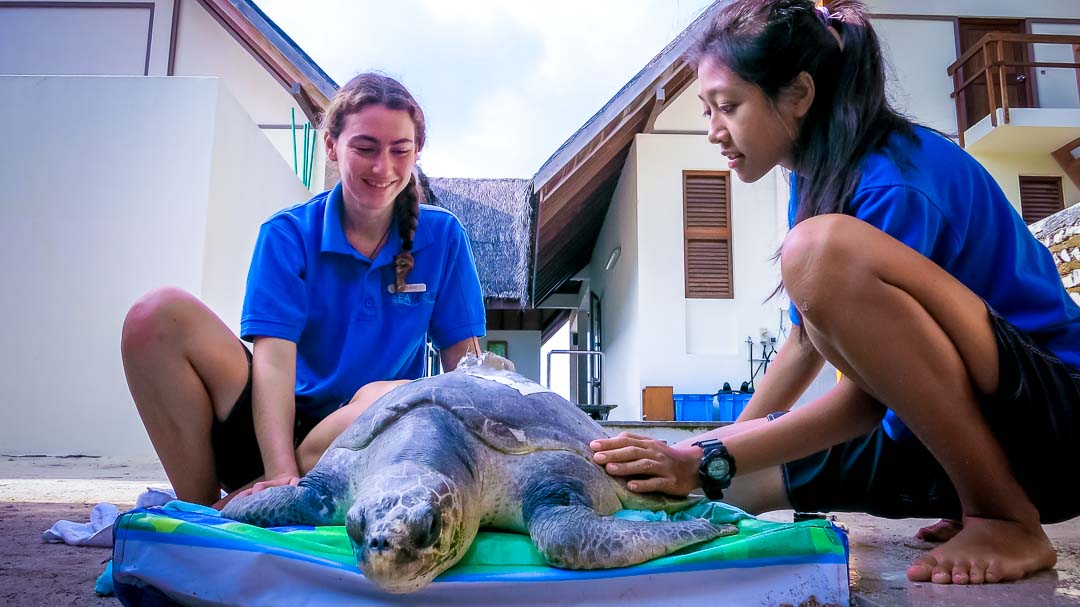