Flying Our Turtles From the Maldives to the World!

The ‘Flying Turtles’ Program was started in 2016 with the aim of rehoming turtles that join our rehabilitation program but are not suitable for release due to the severity of their permanent injuries. Turtles that suffer from long term ‘buoyancy syndrome’ (unable to dive below the water surface) and turtles with injuries such as missing flippers (affecting their ability to swim) would struggle to find food in the wild, and would be vulnerable to attack from predators.

We try to re-home these patients to overseas aquariums and marine centres for them to maintain their quality of life while making space for new turtles to be rehabilitated. In their new environment, these individuals can receive a high standard of lifelong care, including extensive naturalistic enclosures and medical treatments. Additionally, our Flying Turtles act as ambassadors for their species by promoting global education about the threats that sea turtles face.

How Do You Transport A Sea Turtle?

Sea turtles are transported in crates that we custom-design and build specifically for each turtle, to ensure their safety and comfort during the journey. As they are marine reptiles, special care is taken to ensure their skin does not dry out during transportation. To prevent this, the turtles are placed on a bed of damp towel padding, Vaseline is applied liberally before and during travel, and special ointment used regularly to protect their eyes. If the environment becomes too cold, such as in the hold of aircraft, heaters can be used to keep them warm.

In most cases, our Flying Turtles are transported by boat from our Turtle Rehabilitation Centre to Malé, the capital of the Maldives, where they board a specific pre-arranged flight accompanied by a member of our team. On arrival at their target country, the turtles travel to their destination by road, accompanied by the new marine team.

The Story So Far …

In 2016, Olive Ridley turtles Kerry, La Petite, Peggy, and Zahiya became the first four turtles to be rehomed through our Flying Turtle program. All four were originally found floating on the ocean surface unable to dive, and were treated for a variety of conditions including dehydration, emaciation, and poor digestion. Three of the turtles were additionally missing flippers due to entanglement in ghost nets (discarded fishing gear), sadly a common issue for Olive Ridley turtles.

By 2016, the flying four had been in rehabilitation for between one and four years, and all were considered “unreleasable” as they would not be able to feed properly and avoid predation if returned to the wild. They became the first live sea turtles to fly overseas from the Maldives for conservation purposes, and the first Olive Ridleys’ to be represented in a European facility. 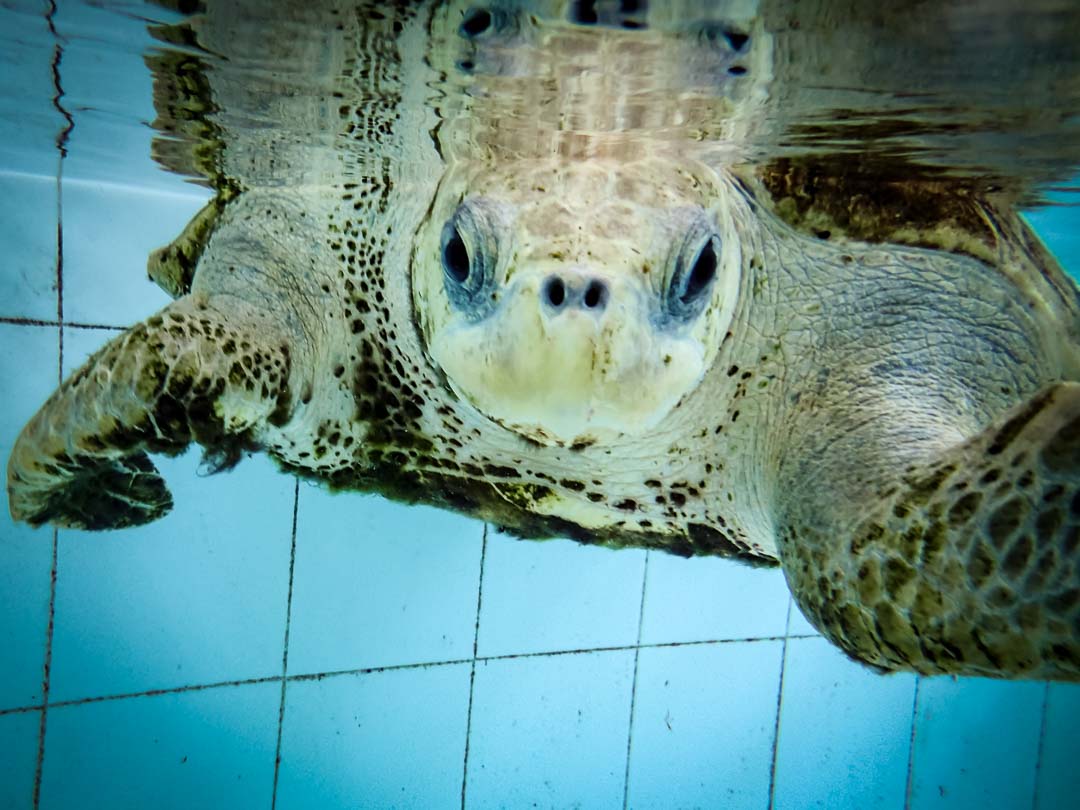 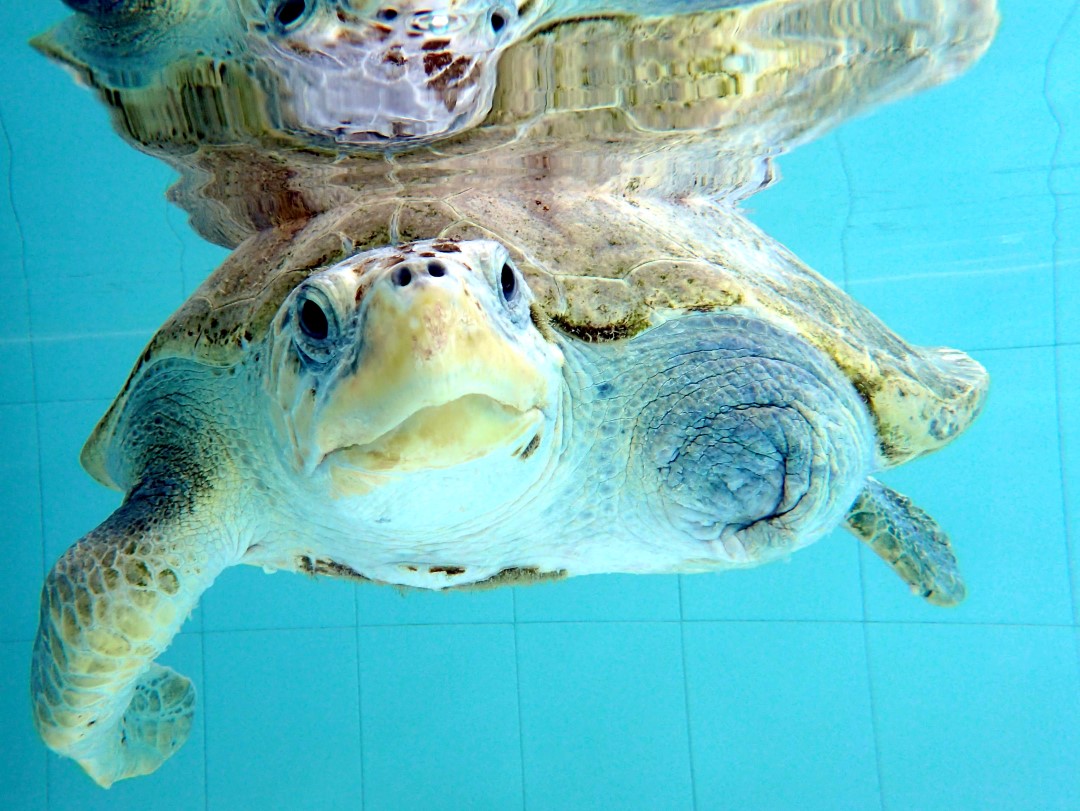 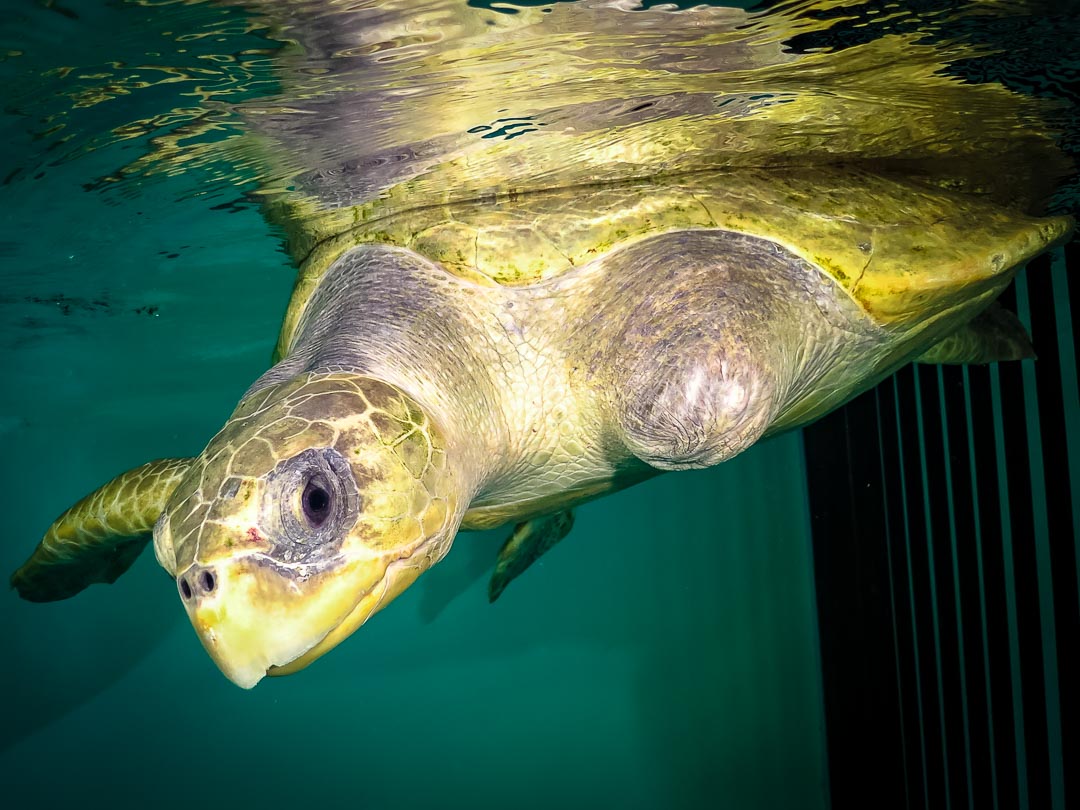 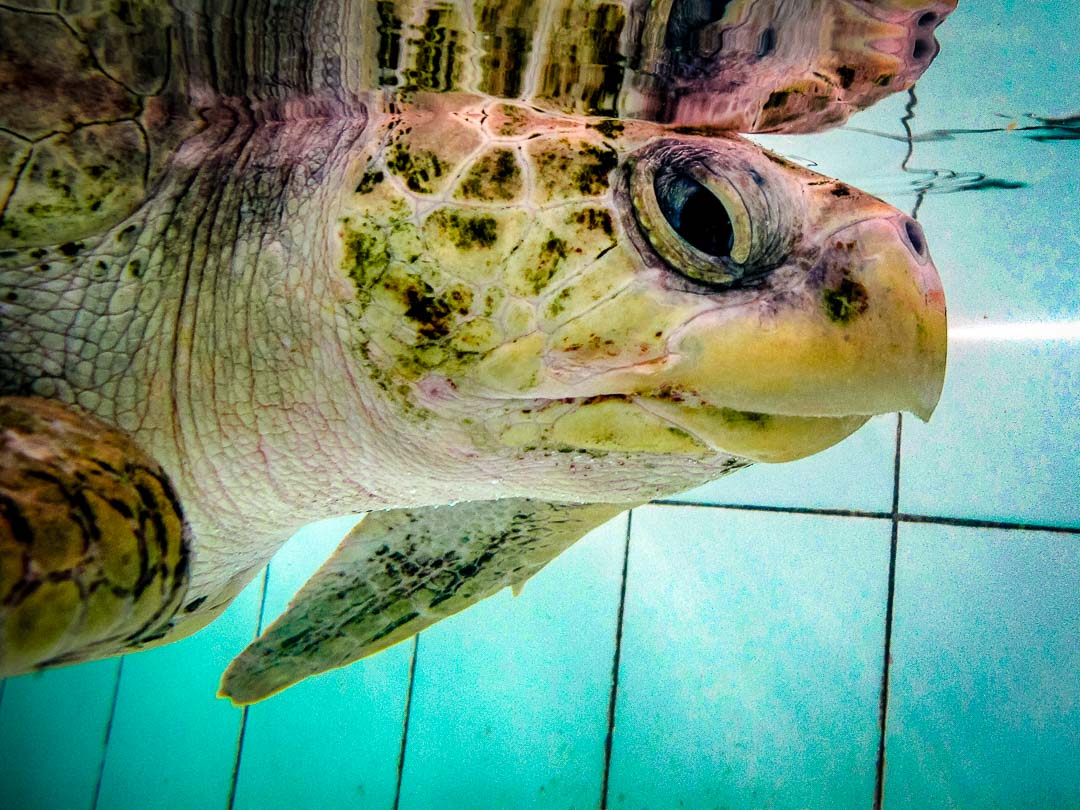 The turtles’ new homes were to be Pairi Daiza Zoo (Belgium) and AquaZoo Freisland (Netherlands) where they would live in large display aquaria with ongoing specialised medical care for their lifetimes.

On departure day, the four turtles were carefully placed in their individual crates that had been transformed into beautiful works of art by Four Seasons’ staff and Landaa Kids Club, ready to head to their new homes. After a fond farewell ceremony, the turtles travelled to Malé Airport on a traditional dhoni boat in the company of the turtle biologist Jamie, who ensured their safety and comfort for the duration of the trip.

From Malé, the turtles took a flight to Dubai accompanied by Stephanie (Aquazoo Friesland curator) and Sebastien (Reefscapers manager and pioneer of the Flying Turtles Project). The turtles were positioned carefully within the hold to ensure good airflow, and with heaters to keep them warm. Sebastien and Stephanie were given authorisation to check on the turtles’ welfare half-way through their journey, at the Emirates Terminal at Dubai Airport. 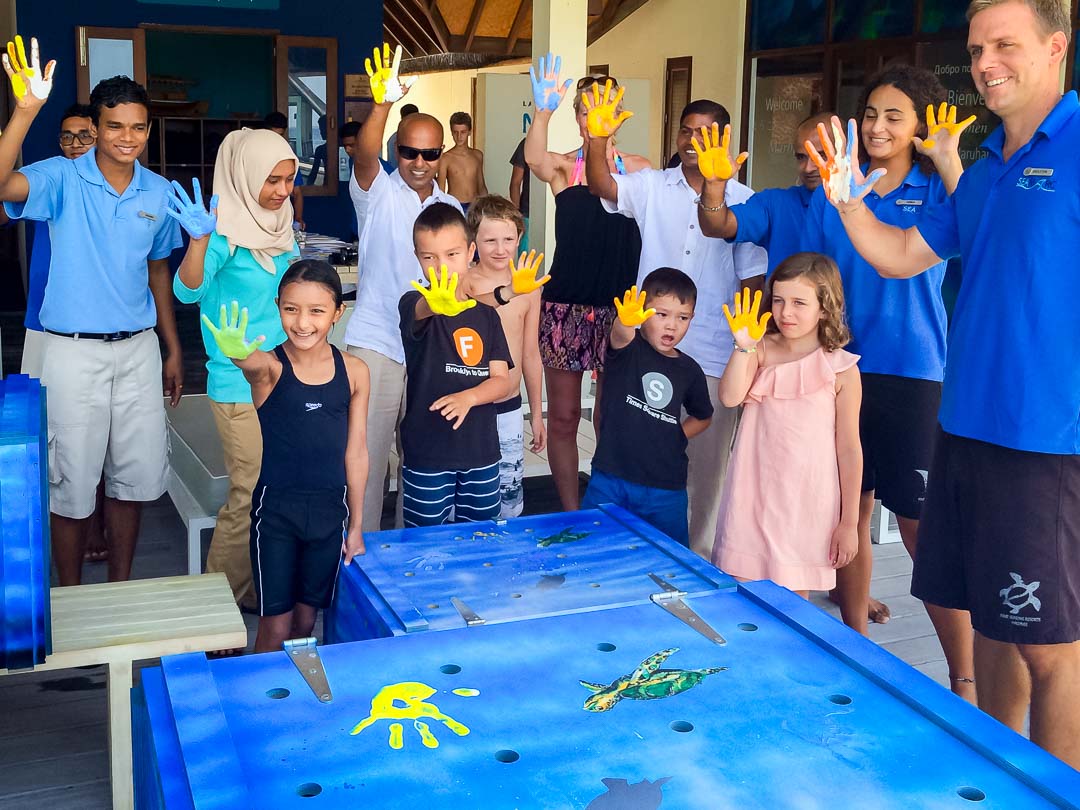 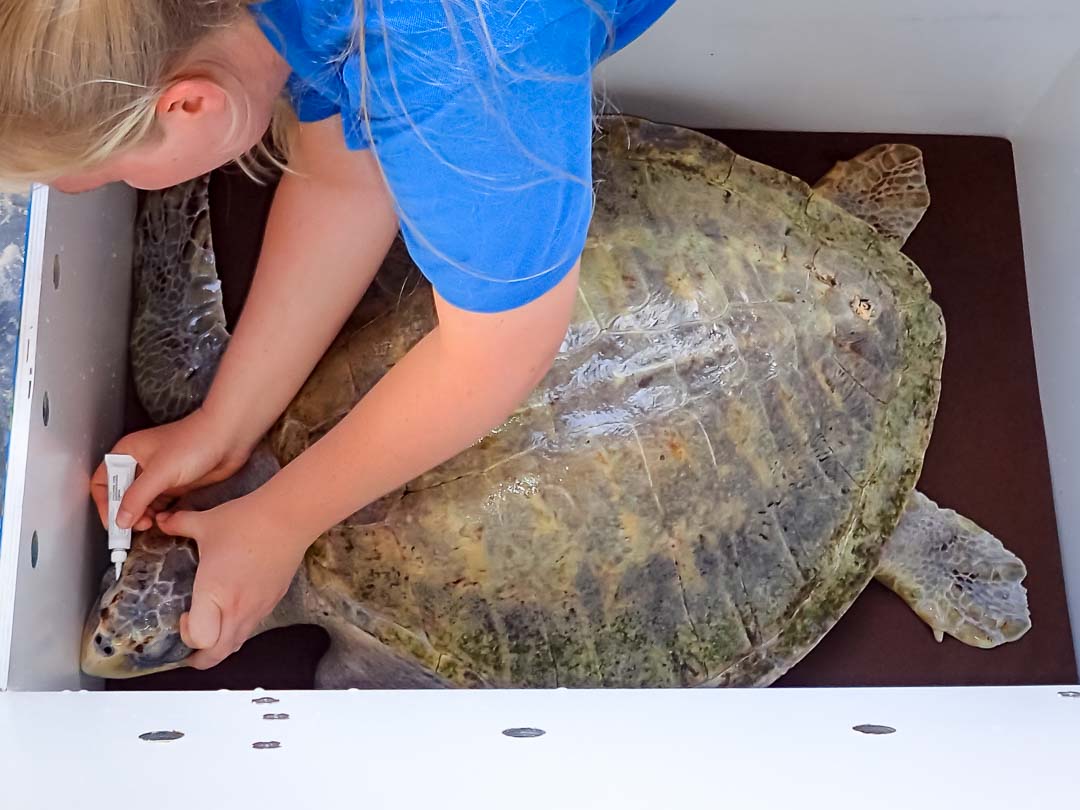 Care before the journey 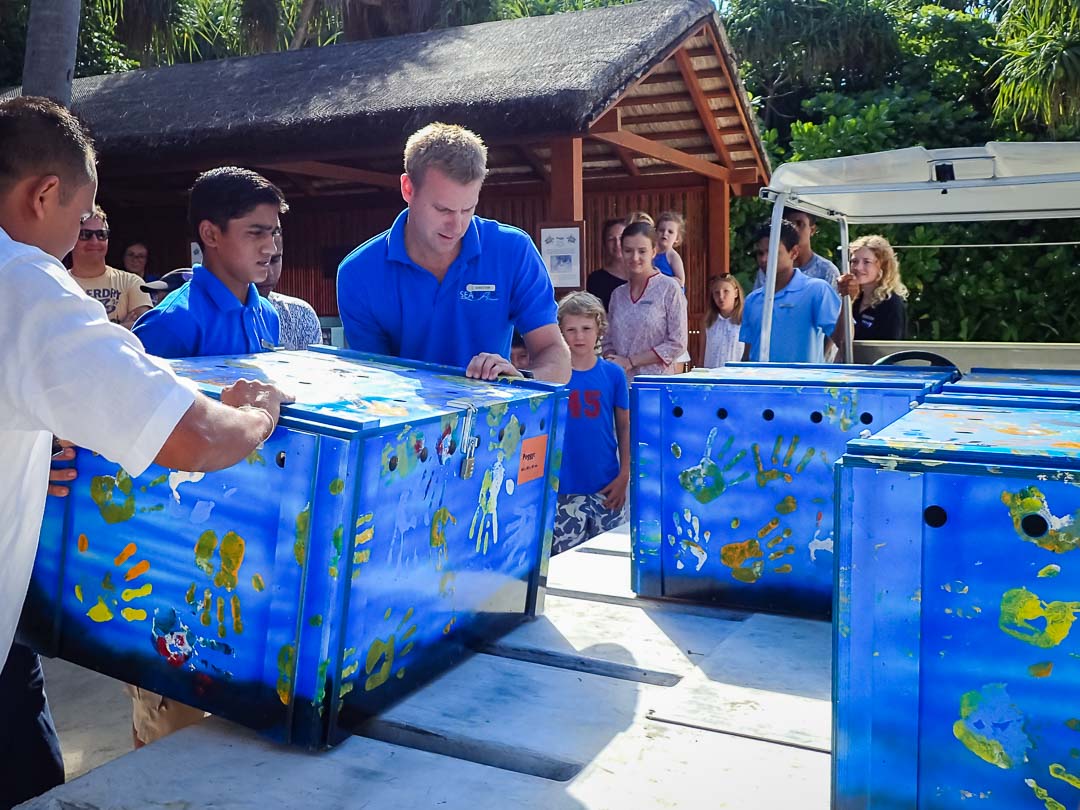 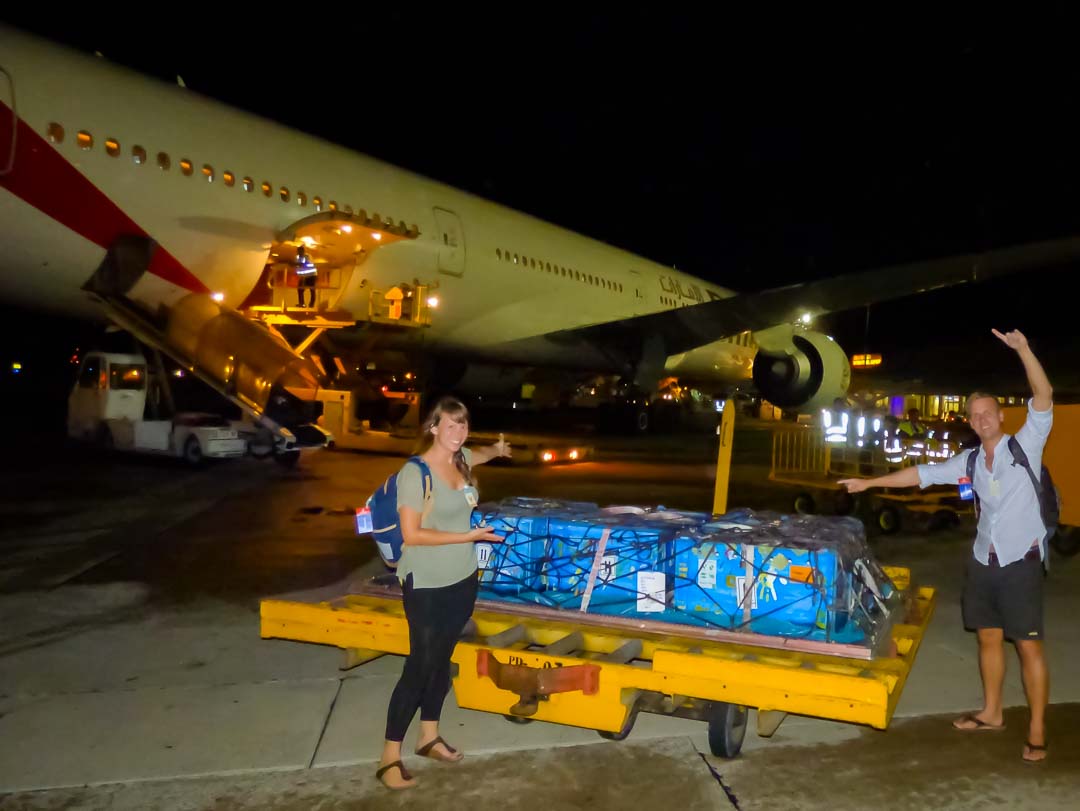 After arriving at Belgium Airport, the turtles were loaded onto a truck for the short drive to the Pairi Daiza Zoo. All four turtles arrived in excellent health, and were swimming in their new habitats later that evening. The next day was filled with veterinary check-ups including X-rays, blood sampling, weight checks, and a good scrubbing. 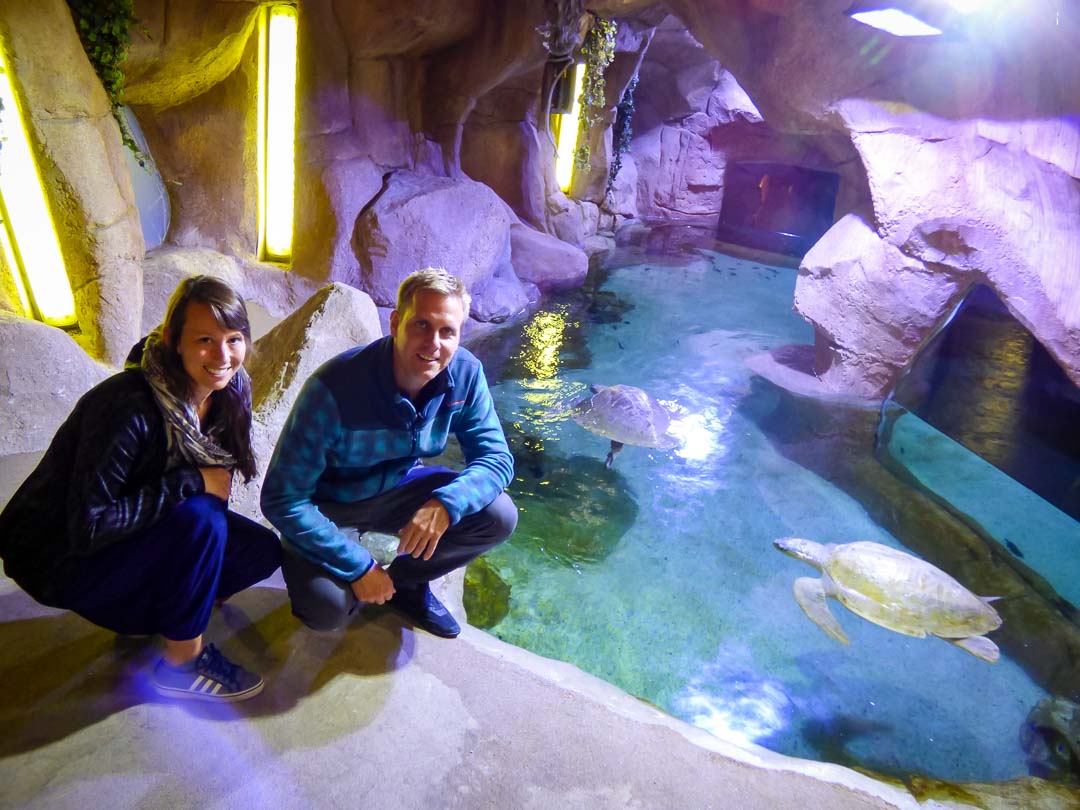 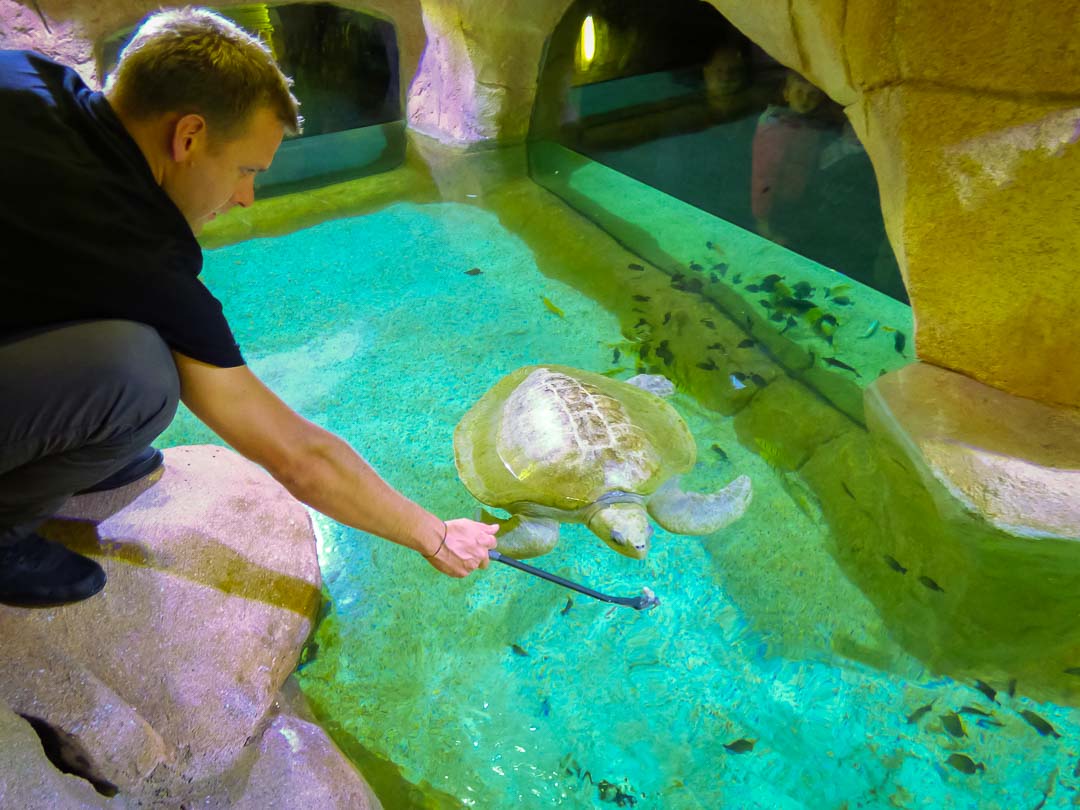 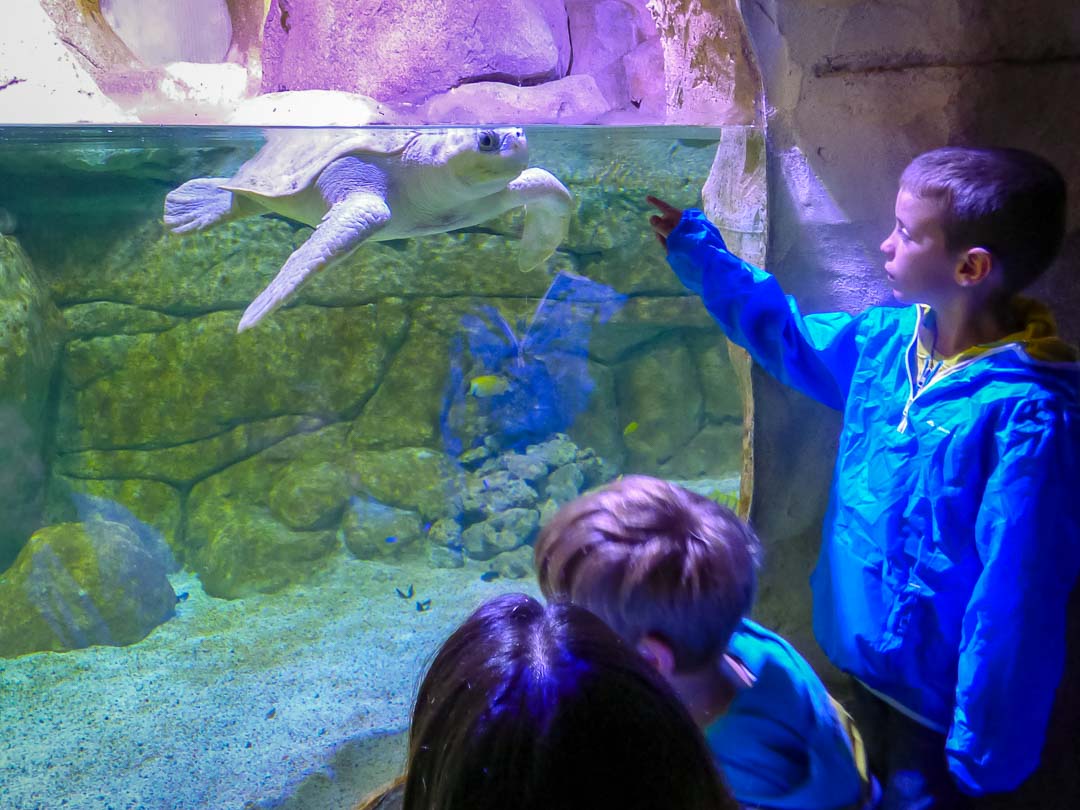 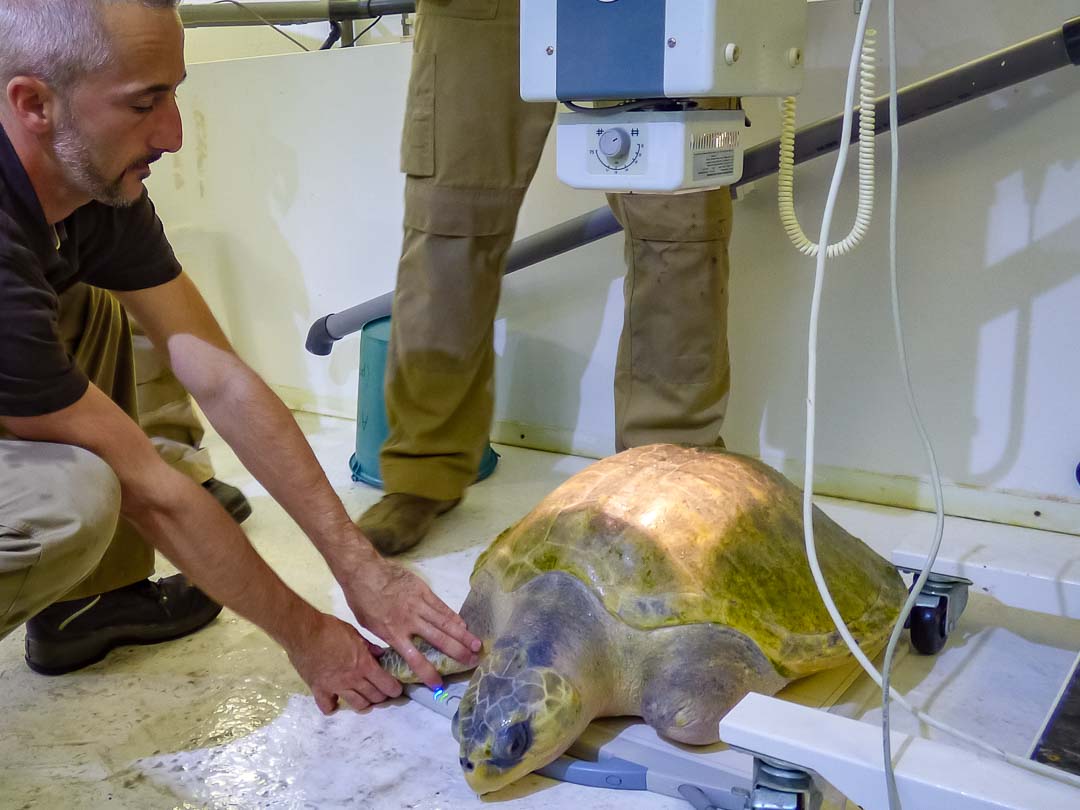 The turtles’ new home, Pairi Daiza Zoo, is a Zoological and Botanical Garden Complex located in Brugelette, Belgium. It was elected as Europe’s Best Zoo in 2019, housing more than 7000 animals from around the world. The park helps to sensitise visitors to the beauty and fragility of nature, and participates in scientific programs for the conservation of endangered species.

Pairi Daiza Zoo welcomes more than one million visitors annually, who will all have the chance to learn about these endangered Olive Ridleys and the danger caused by discarded fishing gear.

A big THANK YOU to the whole Pairi Daiza team🙏

AquaZoo Friesland is located along the natural waterways in the north of the Netherlands, close to the city of Leeuwarden in the province of Friesland. This Zoological Park specialises in aquatic animals and large natural habitats to offer the best for their residents.

Educating the public about conserving aquatic animals is also an important part of the zoo’s daily activities, and AquaZoo will tell the story of our turtles to help spread awareness to the next generation of marine conservationists.

A big THANK YOU to everyone at AquaZoo🙏 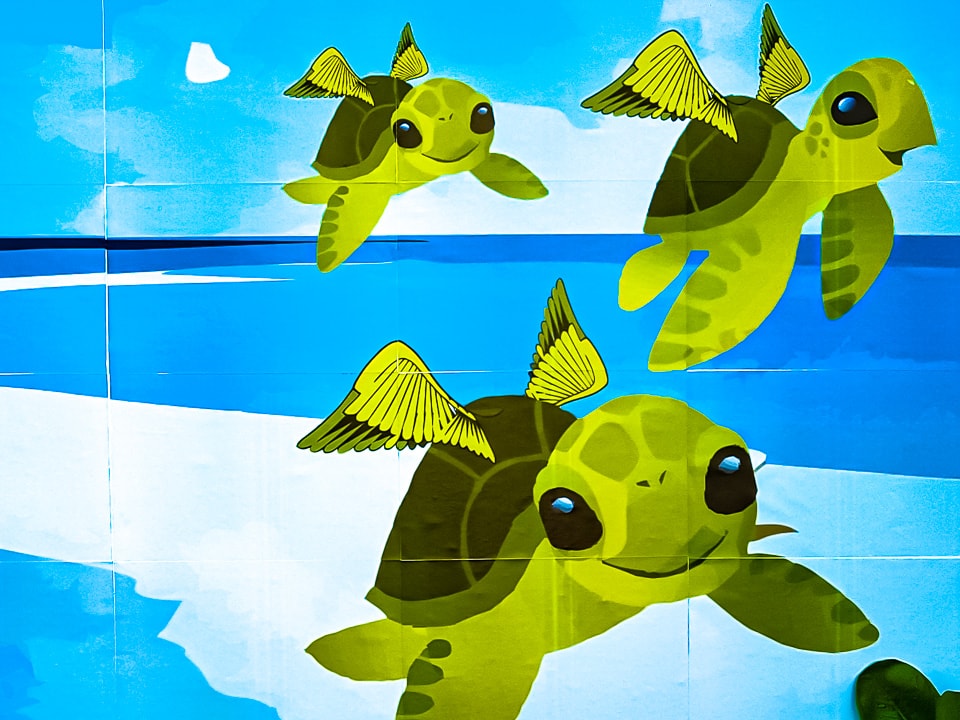 Elsa was a juvenile Olive Ridley turtle admitted on 9 July 2013, after being found entangled in a ghost net. She was missing one of her front flippers and sadly the other was badly damaged and required amputation.

Although Elsa originally had buoyancy issues, she recovered the ability to dive over time, but with two front flippers missing it was unlikely that she would be able to dive and forage well enough to survive on her own in the wild. 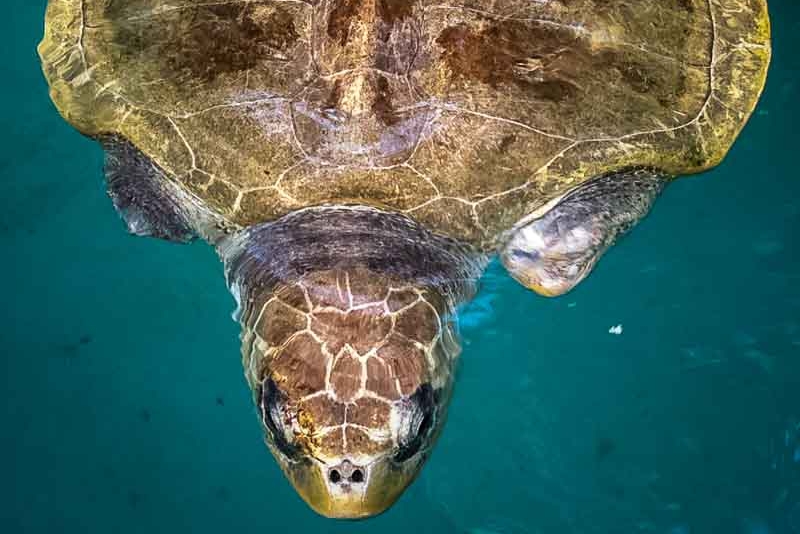 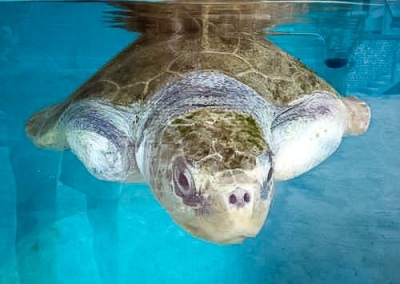 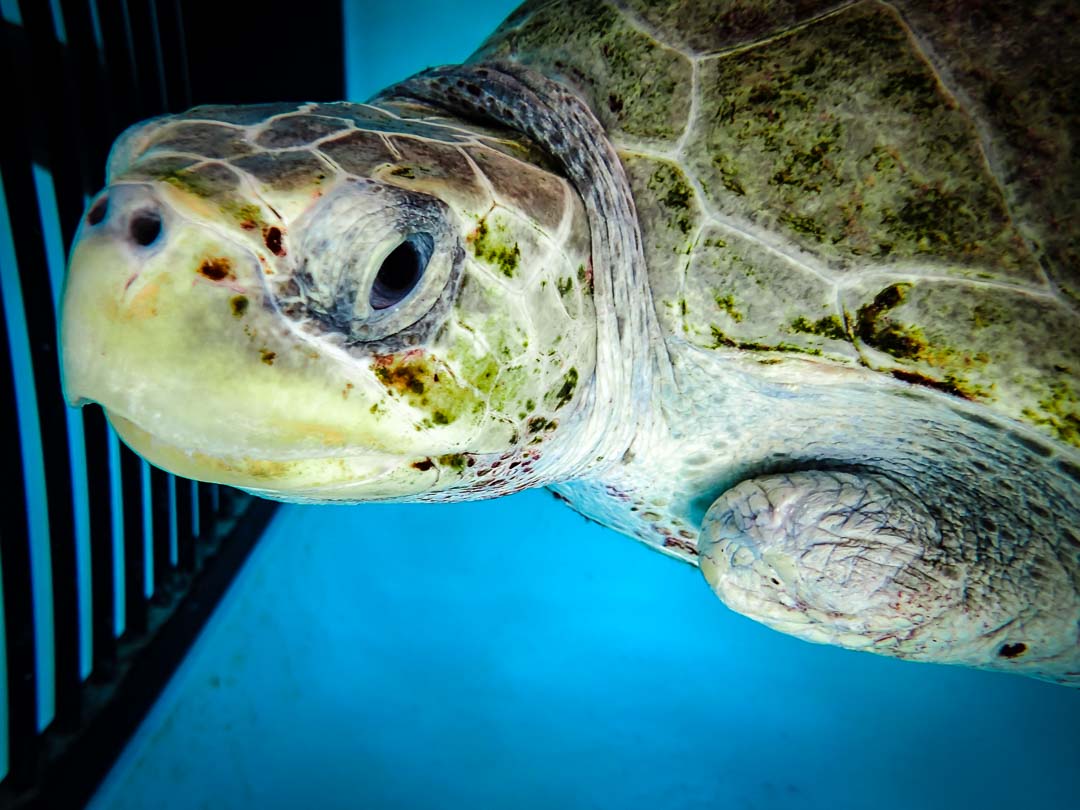 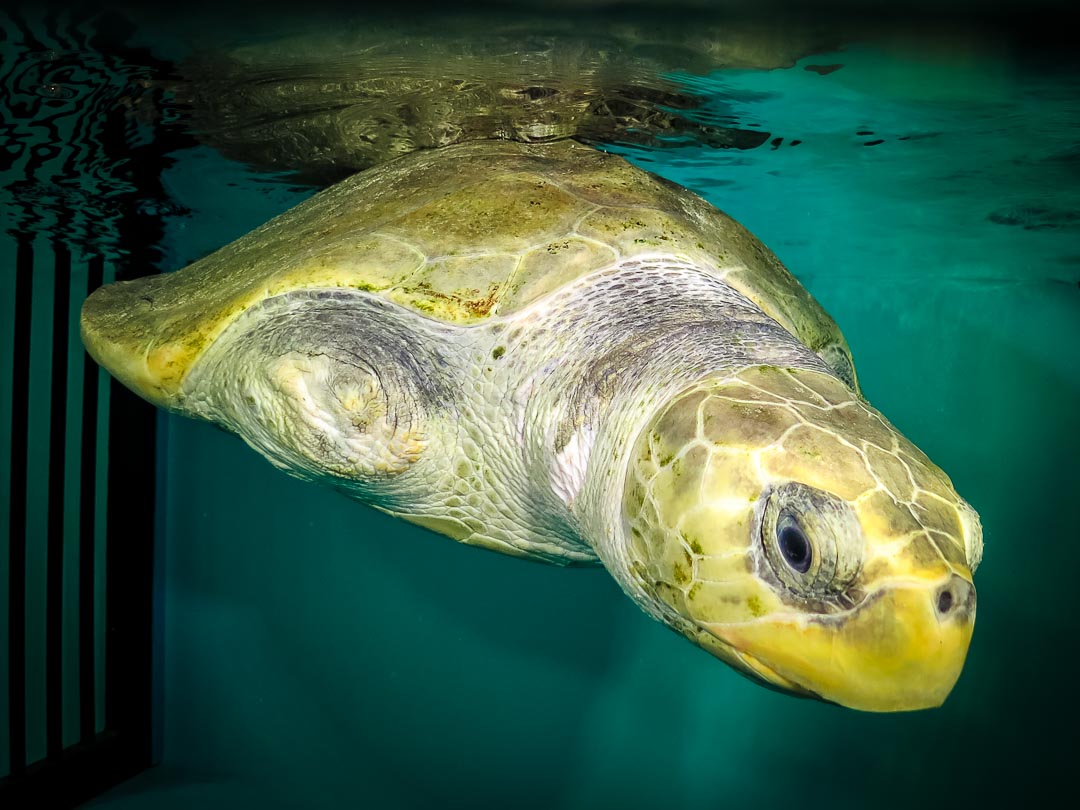 Elsa’s new home was to be the Planeta-Neptun in St Petersburg (Russia). She made her epic journey on 13 September 2017, accompanied by Sebastien to ensure her welfare. On arrival, Elsa was quarantined for a short period, and then introduced to the large 800 square metre aquarium to live amongst rays, eels, and other marine life, where she plays a vital educational role in keeping with the Oceanarium’s ethos.

“In an ideal world, we would return all the turtles we care for back to the ocean to continue their life in a natural environment. But for turtles like Elsa, whose chance of survival in the wild is so low, our Flying Turtle Project offers improved long-term wellbeing and extended medical care in a more diverse and natural-feeling environment than we can offer at our Rehabilitation Centre at Landaa Giraavaru. We are very grateful to Sebastien, the Maldivian authorities, and everyone else who has worked so hard to make this project possible. We know that Elsa will make a great ambassador for her species, helping to educate the public about the threats faced by sea turtles.” — Dr Annemarie Kramer (Reefscapers)

Peggy, one of the four Olive Ridley turtles sent to start a new life in Belgium back in 2016, surprised everyone by recovering the ability to dive. (See video.)
After various tests and health-checks by the resident veterinarians at the Belgium Zoo, a CT scan had revealed the presence of gas in her body. Following months of physical training, Peggy started to successfully dive for food, until one day she was observed resting on the bottom of the aquarium. 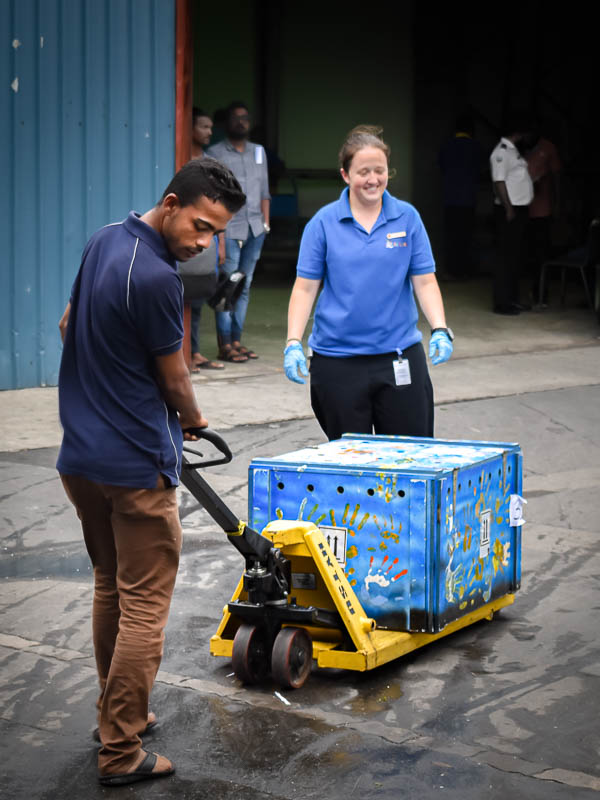 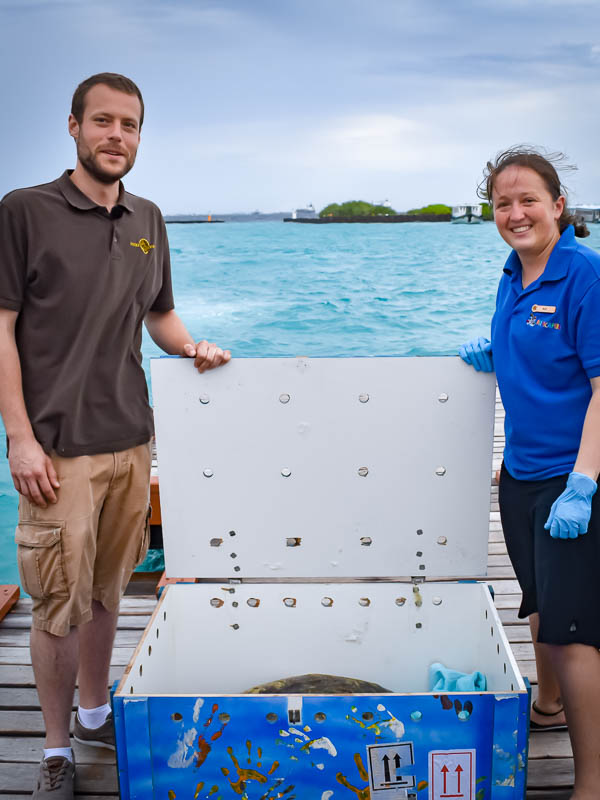 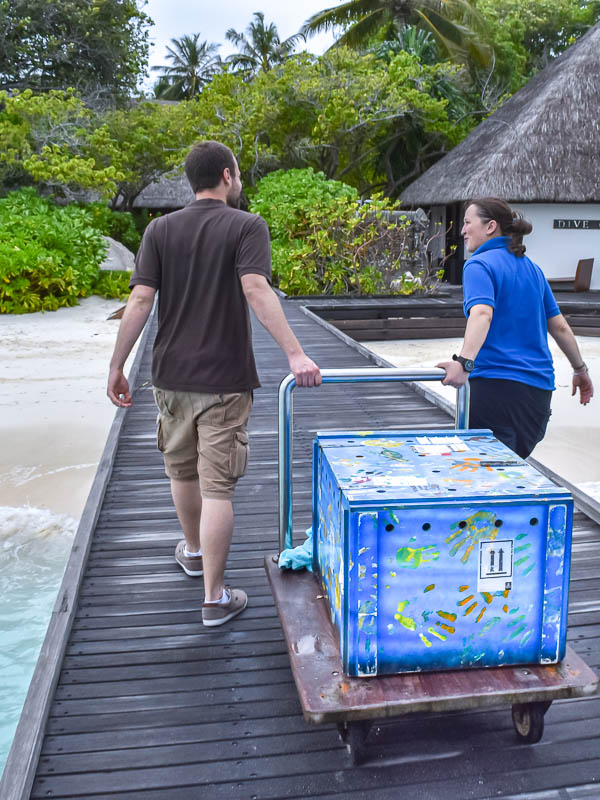 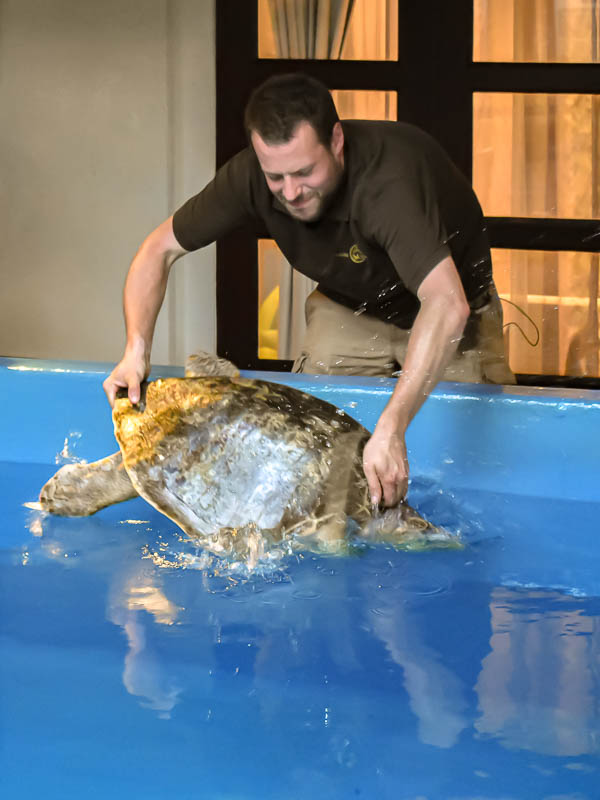 On 19 June 2019, Peggy boarded a flight back to the Maldives. After two days of acclimatisation at our turtle rescue centre, and a flurry of final medical checks, she was released back into the ocean, cheered on by an enthusiastic crowd of well-wishers. A metal ID tag (MS0010) was attached to Peggy’s flipper (in case she is spotted in the wild), and a satellite tag fixed to Peggy’s carapace. This allowed us to track her progress after she had been released.

Peggy made an extraordinary journey of over 5700km! (Interactive map 📌) By the time the batteries on her tag ran out in November 2019, Peggy had travelled around the southern tip of India, up the east coast (an area of Olive Ridley turtle nesting beaches), and had started to move back out into open ocean. Although it’s not certain whether Peggy went ashore to nest, she showed us that turtles can still go on to thrive in the wild even after five years in rehabilitation (and several international longhaul flights!) 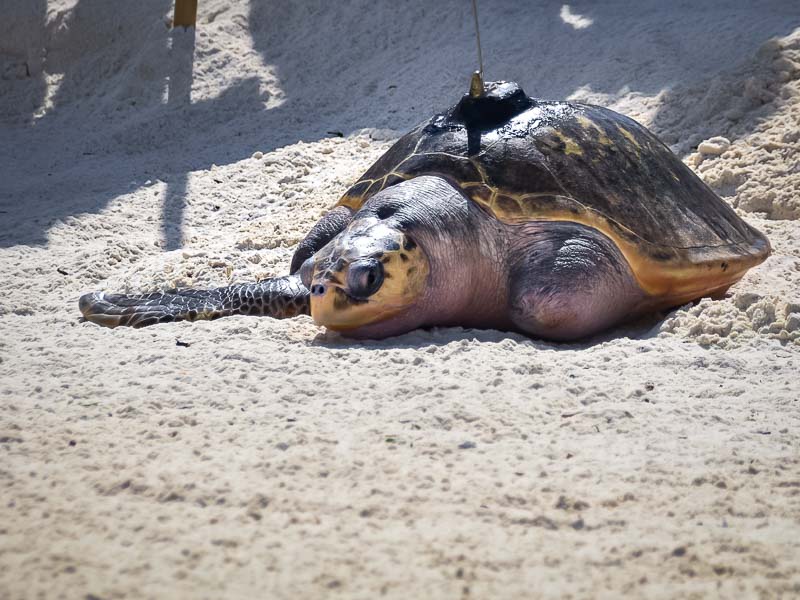 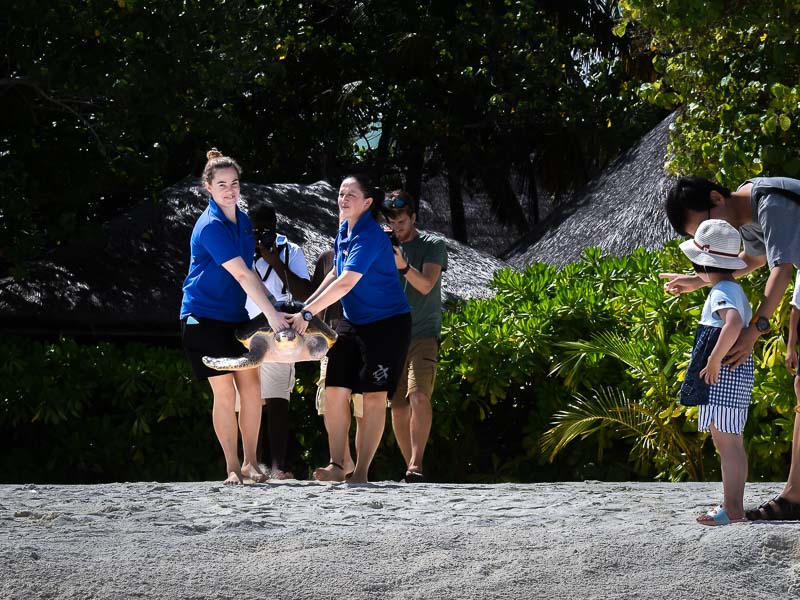 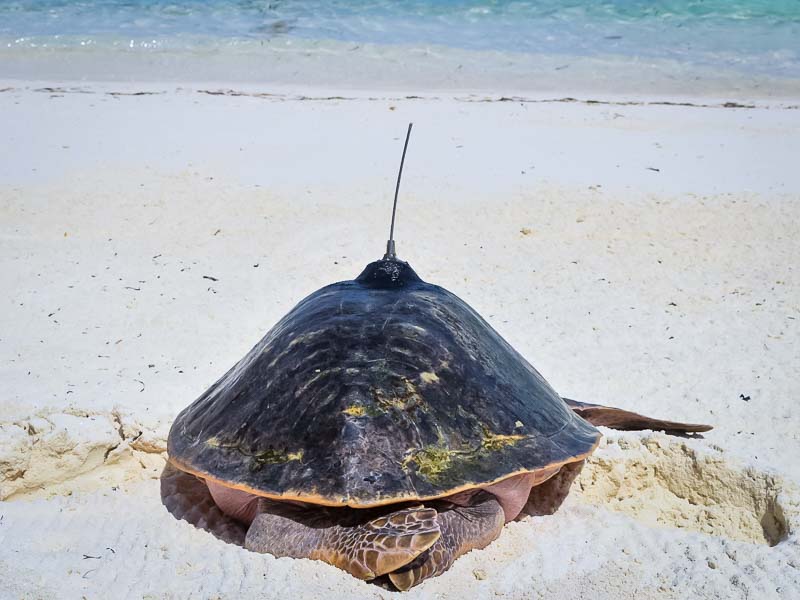 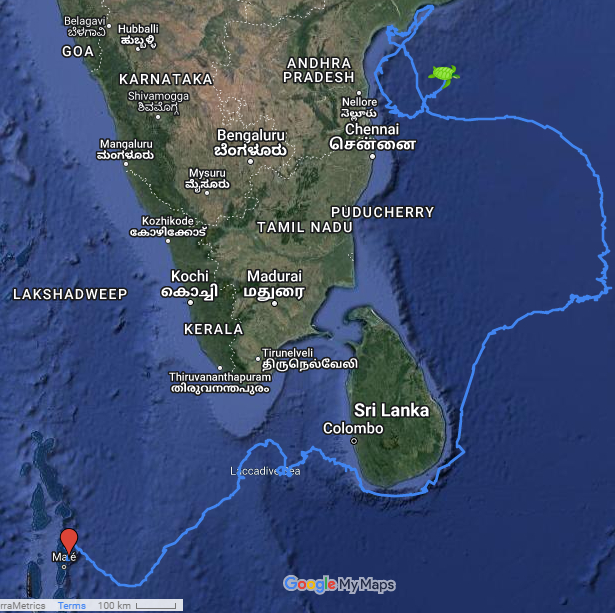 April was a juvenile Olive Ridley turtle, admitted in 2019 missing one flipper and suffering from buoyancy syndrome after becoming entangled in a ghost net. April spent two years at our Turtle Rehabilitation Centre at Landaa Giraavaru, treated and cared for by our resident veterinarian, but didn’t recover the ability to dive and so was unreleasable.

April’s new home was to be Sea Life Loch Lomond (Scotland) that houses 1500 marine creatures, including Scotland’s largest collection of sharks. On 15 November 2021, representatives from Sea Life flew to the Maldives to meet April and accompany her to a new forever home. Four days later, they flew over 5000 miles to the UK, with April in a special temperature-controlled compartment to keep her comfortable. April was welcomed in Scotland with a bagpipe salute!
Many thanks to the BBC and Andy Torbet from Sea Life Trust, and IAG Cargo for travel logistics.

April adapted quickly to her new environment and is now a firm favourite with staff and visitors alike. April serves as an important ambassador for conservation, raising awareness of the huge negative impacts of ocean pollution, and the plight of dwindling populations of sea turtles worldwide. 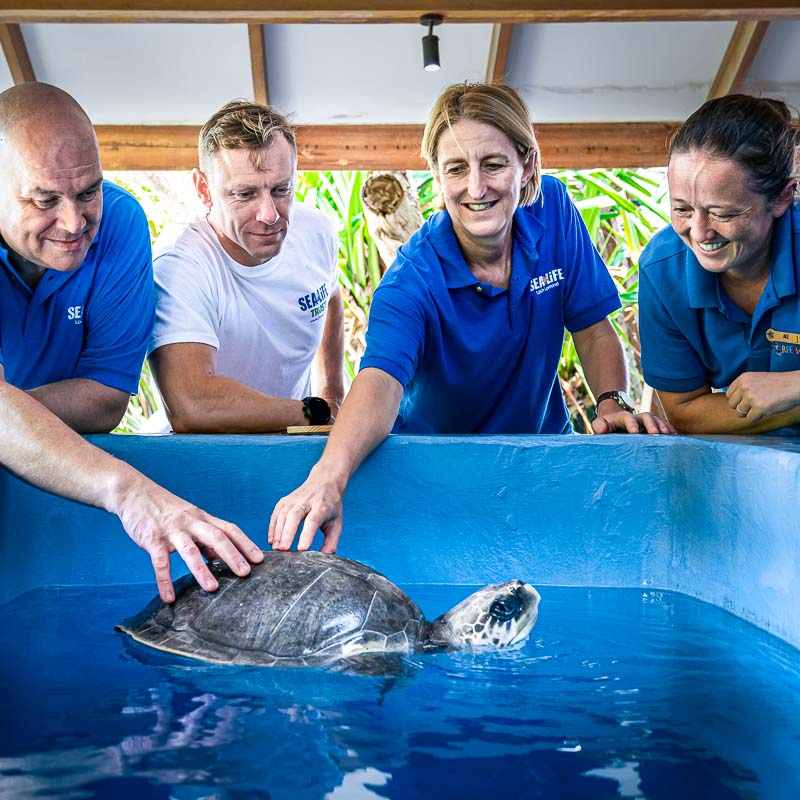 Prep for her journey 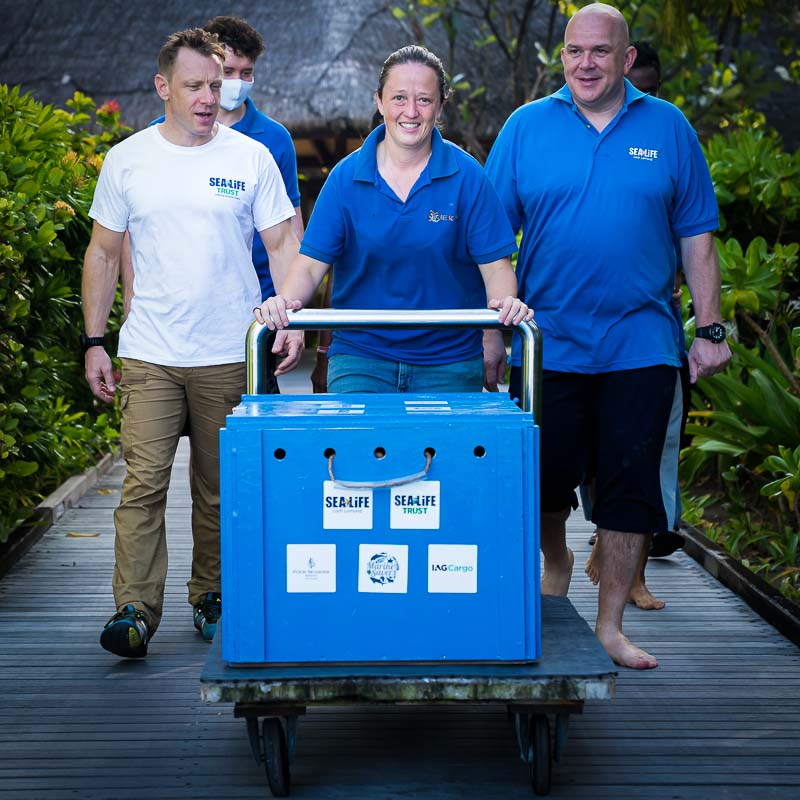 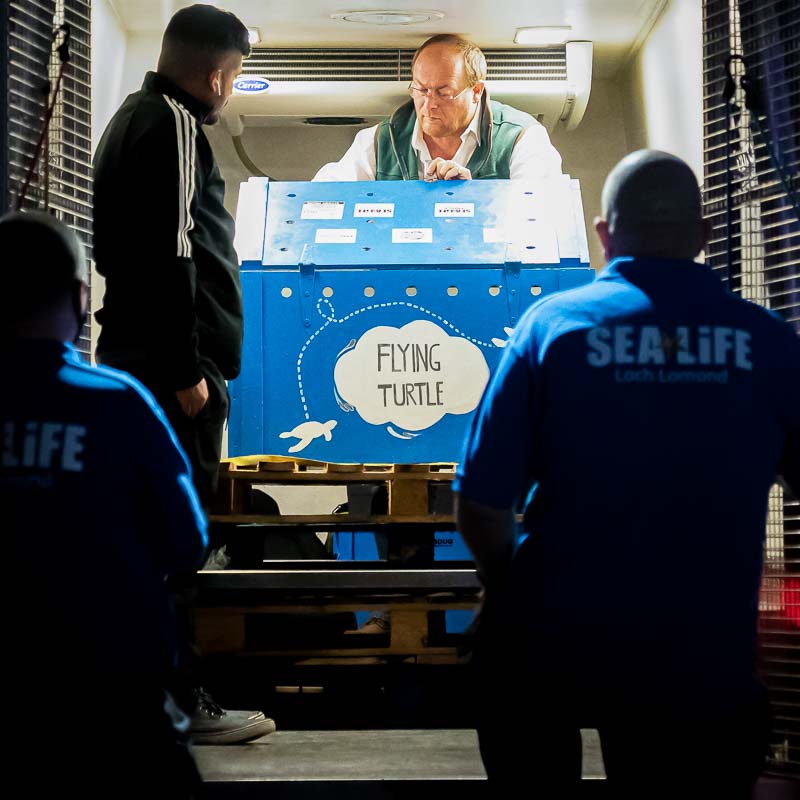 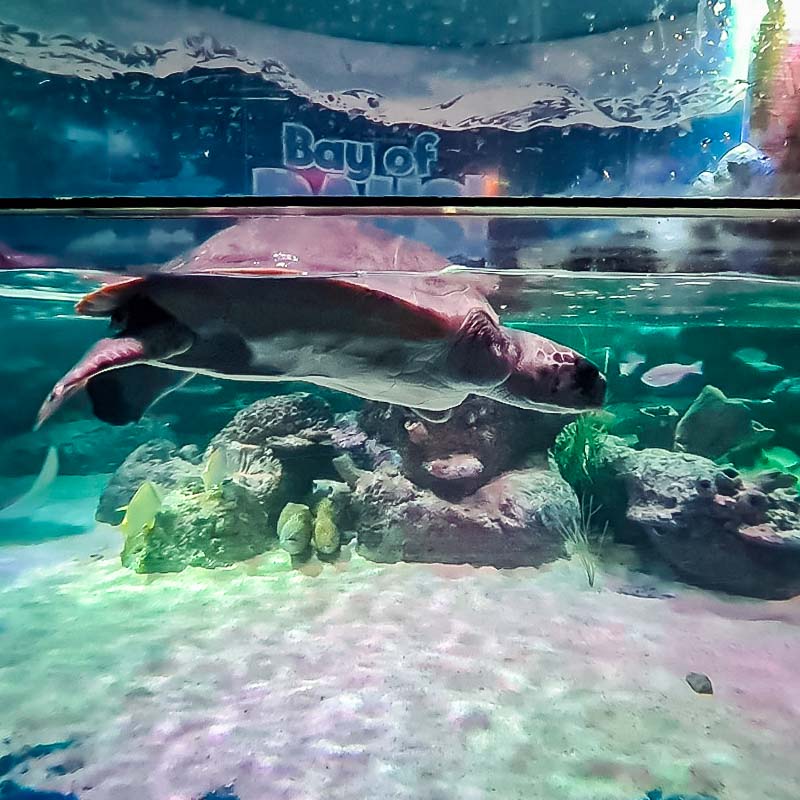 We are in ongoing discussions with a facility that has expressed interest in rehoming all four of our currently unreleasable patients (Frisbee, Maw, Ari, and Artemis). Although we are still in the early stages of this process, we are all very excited to see what the next few months will bring for our latest batch of flying turtles!

Many THANK YOUs to all the people who have helped make this program a success over the years, including the overseas aquarium centres for providing forever homes for our turtles, the airlines and cargo logistics for their professional care and handling, the local TV station PSM News, Four Seasons Resorts Maldives, and our Reefscapers colleagues past and present! 🙏

This project would never have seen the light of day without the continued support and guidance from the following Maldivian authorities: Marine Research Centre, Environment Ministry, Fisheries & Agriculture Ministry, Environmental Protection Agency.