Use your mouse to move the map, or click on the arrows and +/- buttons to navigate & zoom. Click on the turtle icons and traces for more details.

Barbara was found floating on the ocean surface, and rescued on 16 March. After a period of tlc and rehabilitation at our Turtle Centre, she was successfully released back into the ocean on 5 October 2020.
We attached a turtle-tracking satellite tag, so we can monitor her movements as she swims around the Maldives and beyond …

Update: Unfortunately, we soon lost Barbara’s signal for reasons unknown; perhaps the satellite tag developed a fault, or became dislodged, or maybe she became a victim of poachers.

Peggy was released back into the wild on 21 June 2019, from our turtle rescue centre at Kuda Huraa. Her satellite tracking device is transmitting data of her movements as she swims around the region.
After spending several days swimming North, seemingly exploring the islands and reefs of North Malé Atoll, Peggy then swam past the island of Helengeli to the deeper open ocean.

Travelling with the prevailing seasonal currents (as shown here), Peggy changed course from a SE to a NE direction, heading towards the Southern tip of India.
Peggy changed course again, heading towards Sri Lanka, and is currently (8 August 2019) close to the coast at the small beach town of Hikkaduwa (close to Galle, in Sri Lanka’s Southern Province).

Peggy continued her journey around the southern part of Sri Lanka, and then headed out to open ocean. She seemed to spend some time foraging in the area (maybe familiar territory?) before looping round, closer to the Indian coast (Andhra Pradesh, Chennai).

1 September – Peggy has been transmitting for more than 100 days now, and has clocked up in excess of 4500km! She is now heading NE into one of the bays off the Indian coast. It seems like she is foraging for food in the area, which is a well-known feeding ground for Olive Ridley turtles. From the details of the satellite track, we think she may have even ventured onshore to lay eggs, near Krishna Wildlife Sanctuary.

8 November – Peggy’s satellite signal stopped, after transmitting for a total of 142 days (maybe the satellite tag was dislodged, or the battery exhausted). Her last transmission was 182km off the coast of India, in the Bay of Bengal, with a total route of 5771km!

Read Peggy’s incredible adventure
how she flew to Belgium in 2016, and returned to Maldives in 2019!

Historical Data – some of our satellite tagged turtles from 2012 onwards 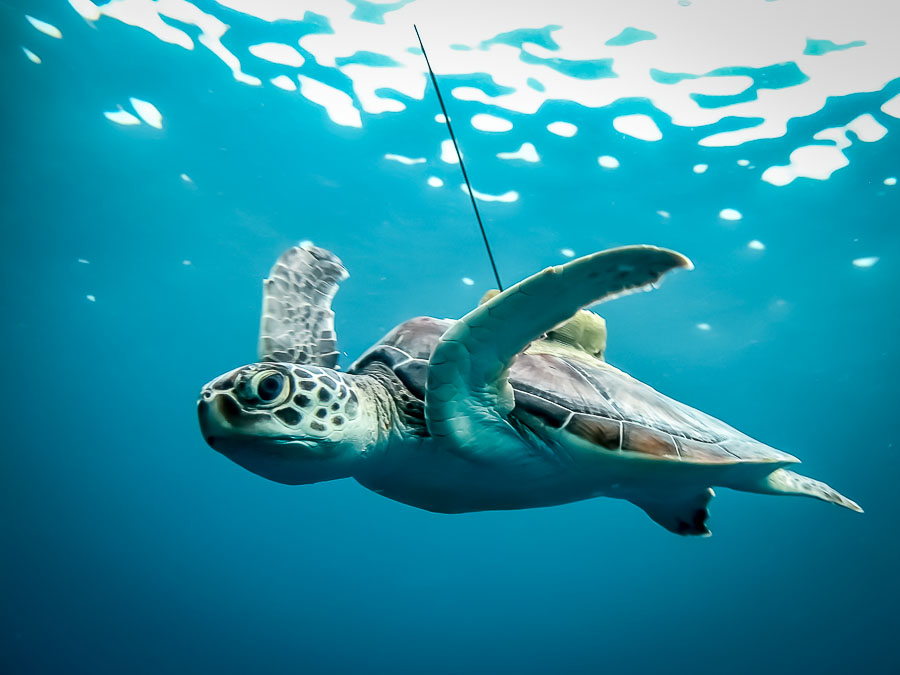 Stevie (RB.LO.127) – This large adult female Olive Ridley turtle (25.6kg/62.0cm) was found near Six Senses (Laamu Atoll), entangled in a ghost fishing net. She was sent to us on 8 February 2018 suffering from superficial injuries, and was actively swimming and diving on her second day at our Centre.
On 20 April, we released Stevie back into the ocean equipped with a satellite-tracking device (see Stevie’s page for more details, photos and video). The latest GPS satellite data is plotted above in our interactive map, so you can track Stevie’s journey.

By transmission day #43, Stevie continued travelling in a NE direction, totalling almost 2000km! Sometimes she follows the prevailing ocean currents as expected, sometimes she seems to swim against them (ocean currents map here at ‘Earth’). It’s been noted that she would use the currents at different times of the day to travel. Her transition temperature has varied between 24 – 40°C (averaging 27 – 31°C), implying that she is healthy and not suffering from buoyancy syndrome or signs of entanglement in marine debris (ghost fishing nets).

Day #75 – Stevie has been travelling northeast, totalling around 2750km so far.

Day #93 – The tag was functioning normally until transmission ended on 20 July. Stevie had been traveling NE from her release location, totalling 3200km. It is possible the transmission stopped due malfunction or fouling with algae, or maybe due to a boat strike or poaching close to human habitation in the Andaman/Nicobar Islands.

Nash (RB.LO.083) – a female Olive Ridley, was found by staff at One & Only Reethi Rah on 4 june 2016 entangled in a large ghost net. After freeing her from the net, they attempted to release her as she didn’t have any serious wounds and was in excellent body condition; however it soon became apparent she was not able to dive.
After a few days of rehabilitation in our Rescue Centre, she was able to rest on the bottom of the pool and dive normally again. Nash was released on 15 June 2016, with a satellite tag generously donated by Dusit Thani Maldives.

Nash’s satellite tag continues to transmit regularly at alternating day intervals, giving a long term snap-shot into this female Olive Ridley’s use of the Indian Ocean basin. During July the turtle crossed the equator to the southern hemisphere, travelling close to Addu Atoll in the very south of the country. Nash is currently 600km West of the Maldives, having swum 1,870km since release (a straight line distance of 752km).

(September 2016): Nash is currently traveling towards the Maldives, parallel to her initial swim that led her over 700km west. Although this has decreased her overall straight-line travel distance to 606km, Nash has travelled almost 2,400km in 106 days. In the last 30 days, Nash has swum a distance of 497km, an average of 16.5km per day.

(October 2016): Nash has provided 128 days of satellite telemetry data, ending on 21 October 2016, 49km East off the coast of the Maldives. Throughout her travel in and out of Maldivian waters, Nash swam a total distance of 3015km, with her last transmission just 315km southeast of her release location.
This satellite data is similar to the turtles released in 2015 from Landaa Giraavaru, in which all turtles immediately left the nearshore Maldivian waters remaining 50km from land, swimming into deeper waters before returning to the Maldives. The typical life of the model of satellite tag affixed to Nash is 100 days, so transmission probably ended due to this cause (plus the data shows Nash was actively swimming immediately prior to the cease of transmission).

ESME (CM.080) blue – transferred to our Head Start Programme on 29 August 2014, along with two siblings at the age of nine months, from the local island of Kinolhas (Raa Atoll). At admittance, Esme weighed just 780g with a straight carapace length of 17.3cm. She grew to 30cm in length and reached an impressive 3.6kg in weight, and was released on 15 March 2015 (video) at Makunadhoo Reef, on a guest Turtle Safari excursion.
After release, Esme was seen to head in a Northerly direction, out of the atoll, but unfortunately the tag stopped transmitting on 18 March. The tag may have malfunctioned or fallen off, or she may have been a victim of predation or human interaction.

WANG (CM.079) yellow – arrived at our Centre on 29 August 2014 (with Esme), at the age of nine months. During the six months in our care, she grew to 27cm and weighed 3.3kg, before being released on 18 March 2015 at Makunadhoo Reef (on a guest Turtle Safari excursion).
After release, Wang initially swam in a Southerly direction within the atoll, and is now headed West away from Maldivian waters. He has swum a distance of 2,041km since release, and is currently 256km SE of the Maldives.
The last transmission we received was on 29 April, with the last location being 256km east of the Maldives and 948km from Malé. During the 42 days the tag was active, Wang swam a total distance of 670km.

Gaston (CM.078) green – arrived as a hatchling way back on 29 August 2014 with two additional siblings (both released in early March). By June 2015 he had gained 3.2kg in weight and measured 28.7cm, so we timed his release for World Ocean Day on 8 June, at the Kuda Huraa House Reef.
Gaston is currently swimming in a north easterly direction, towards Sri Lanka and the Southern tip of India – a distance of 619km in 21 days.
The last transmission received was 29 July, day 51 since release, located 624km East of Sri Lanka. Since release, this he swam a total of 2198 km and covered a straight distance of 1487 km from Kuda Huraa.
For yearling sea turtles it is difficult to attach tags that provide long term data due to the shape of the carapace and high growth rate leading to premature shedding of the tags. In studies at other centres, tag longevity is typically 2-3 months, which is the average transmission time of tags deployed on Kuda Huraa Head Start turtles.

NOAH (Hawksbill Turtle released 25-Nov-12 (report & video) – Noah’s tag stopped transmitting on 9 November 2013, after providing us with more than one year of data. He spent most of his time swimming around the same location – close by at Makunudhoo reef, which is well known as a feeding ground for hawksbill turtles. The reason for the failure of the tag is unknown; the battery may have failed or the sensors may be fouled. We hope to keep following Noah with the help of the marine biologist at One & Only Reethi Rah, and we occasionally spot him ourselves on snorkelling trips, close by at Makunudhoo reef, where he appears healthy and active.

Kuda Huraa-born hatchlings – These three Green Turtles were part of a nest from right here on Kuda Huraa beach, emerging from the sand on 21 September 2012. After a one year ‘Head Start’ in our turtle-rearing facility, they were released together on 25 September 2013. All three turtles swam initially in the same Easterly direction, seemingly following the oceanic currents.
ALFRED – appeared to be following the same line as Spartacus (yellow) some months earlier, towards Malaysia – this appears to match the oceanic currents in that area. Stopped transmitting part-way towards Indonesia.
MALUO – after initially heading east towards Sri Lanka, he turned northwards following the currents to the north of Maldives (west of mainland India) where the signal finally stopped around the Lakshadweep Islands.
BAILEY – stopped transmitting in March 2014, located off the west coast of India. He managed to clock up a total of 1,600 miles whilst travelling around the islands of the Maldives and then further north around Lakshadweep. 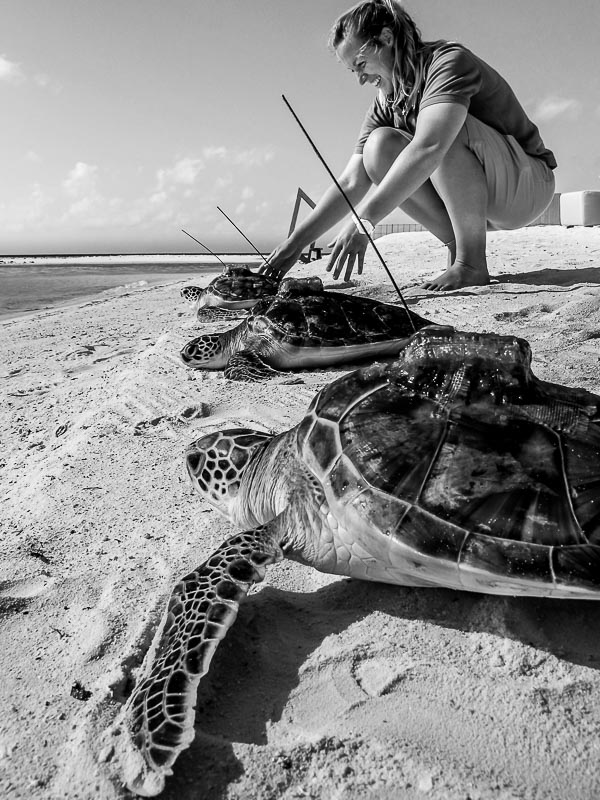