[A]s part of our regular monitoring and photographing of the coral frames at Kuda Huraa, we have observed that other marine life often makes a home on the frames, in addition to the attached coral fragments. We want to research the interaction these animal species have with the corals, and see how this might impact our propagation project.

We have been visiting each area of the lagoon to find out which species of coral these barnacles are most commonly found living in, and also in which locations we see them the most. From this information, we are planning to set up some experimental frames, to study the coral/barnacle interaction from several angles: firstly, to see if the barnacles affect the coral fragment growth rates (and if location affects the development of new branches); and secondly, to find out if the barnacles are being relocated when we attach the coral fragments, or are later establishing themselves on the frames naturally after transplantation to the lagoon.

[S]o this month we set up the first experimental frame (#1033), consisting of one fragment per bar, with each fragment hosting numerous barnacles. Once a week, our coral biologist visits the frame, photographs it from each side, counts the number of barnacles, and then carefully kills each barnacle with a pin. Our photographs then document the size of the fragments, and will be analysed to determine growth rate.

This is currently the first phase of the research, and the main aim so far is to see if we are able to monitor the fragments effectively using this technique. The information we hope to gain from these experiments will enable us to better understand both the environments in which the frames are located, and also the effects of other animals on the long-term success of coral growth. 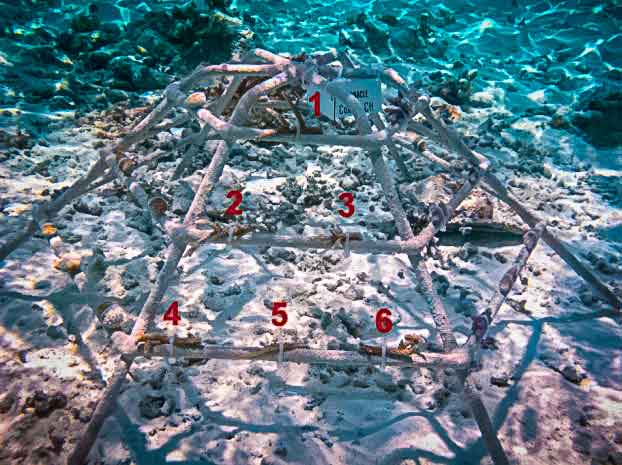 [A]fter observations of barnacles on both natural and frame colonies, we have chosen three Acropora species which seem to have a high presence of barnacles (A.humilis, A.microphtalama & A.palifera). We set up three small frames at a depth of 1.3m, each frame with all three coral species attached.

Each Sunday we will monitor the frames, and take a photograph of each of the six faces. Each coral fragment has been given an ID number. Afterwards, using the programme ArcGIS and a feature called “rubber-sheeting” we can measure the growth of each fragment and see if the barnacles have had an impact on the growth of the coral. We will also monitor to see if the frame without barnacles shows any sign of their presence over time.

Each frame has the usual six ‘faces’, with six coral fragments of the same species on each face, two faces per species:

A.humulis was chosen as this species is easy to transplant.
A.microphtalama is commonly seen around Kuda Huraa, and is known for rapid growth.
A.palifera often has the most barnacles present – it lives in the rocks, is easy to transplant and grows slower than the two other species.

[T]o celebrate the festive season at the end of 2011, we made a special coral frame in the shape of an Xmas tree and transplanted it to the House Reef. Over the first year we noticed that growth of the coral was slow and there were a high number of barnacles inhabiting the coral fragments. Other frames placed nearby did not seem to have this problem, but they were situated closer to the actual reef area with a resident fish population.

To investigate this we made three new frames from Acropora humilis fragments, and ensured that they were all completely barnacle-free. One frame has been placed next to the Xmas tree, the second one is 10m away close to a small reef full of fish, and the third one is at the top of the reef at 2m depth (where many barnacles have been observed).

Every other month we will return to the frames to note the presence of barnacles in each of the fragments. This experiment will run for a couple of years to ensure we have covered the spawning and recruitment periods for different species of barnacles, and will give us an idea about how barnacle recruitment may impact on the new coral fragments. 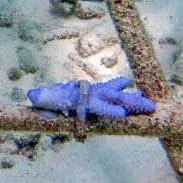 Little overgrowth of coral over tie 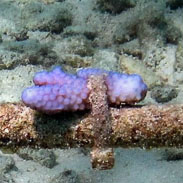 Complete overgrowth of coral over tie

[O]ver the last two months the coral fragments have started to grow over the ties that bind them to the frames as expected, however, we have observed a very definite difference in the rates of growth. The frames on which we are actually killing the barnacles are growing more slowly (as predicted); however, the control fragments without any barnacles appear to be taking longest to overgrow their ties.

This initial observation is a surprise, but could be due to the effects of the increasing water temperature seen during April. New coral fragments will often show signs of bleaching when re-transplanted onto the frames, and the corals would regain their normal colour within about a month. The higher temperatures mean that the corals have remained stressed for longer than normal, so they focus energy into gaining food and coping with the stress, rather than putting energy into active growth. The coral fragments are sourced from a number of mother colonies – each colony will have its own natural resistance to stress and it’s possible that the fragments on our control frame have less resistance to temperature stress.

[A]ll three of our test frames now have barnacles living within some of their fragments. We have noticed that the frame with the most barnacles present in each fragment is at 2m depth and sitting on top of the reef – 38 barnacles living in one fragment. The two frames at 4m are showing approximately half this number of barnacles.

Most of the barnacles are very small in size and appear to be living on the surface of the coral. We even saw one barnacle on the new tissue that had grown over the cable tie; this is good evidence that we didn’t transplant all the barnacles with the fragments. Barnacles are sedentary and once they have picked their location they cannot move. As the tissue covering the ties did not exist when the frame was placed into the water, this barnacle has to have recruited on to the frame.

This is our first look at how many barnacles have recruited and we will look again in two months’ time to see if the number of barnacles has changed and if all the barnacles we are seeing now have survived.

[F]our months into our barnacle recruitment experiment we returned to our frames to take new photographs. When these frames were transplanted, none of the fragments had any visible signs of barnacles on them, but now there are barnacles living in all of the fragments.

After the first two months of the experiment we observed less than 1% mortality of coral fragments across all the frames; however, after four months the mortality has now increased –

We believe the death of the corals has occurred for a number of reasons:

The remaining fragments on all of the frames are growing nicely over the ties and on to the frames. From these fragments we will be able to observe how the corals develop over time and see whether a high presence of barnacles within a particular area of the corals will stop that area from producing axial corallites (which enable new coral branching).

[I]t has been six months since we set up our barnacle experiment, and now all of the living coral fragments have grown over the ties, with best growth and branching seen with Acropora humilis. By comparison, Acropora palifera is known to be slower growing and does not branch. A few of the coral fragments died off – mainly Acropora microphthalma species – when the water temperatures increased during April/May.

We have seen that all the fragments are now populated by barnacles, including the control frames, which were originally barnacle-free. This would suggest that barnacles are recruiting onto the fragments post-transplantation. Over the next month we will begin to measure all of the fragments to see if there are any noticeable differences in the growth rates of the corals for each of our treatments.

Various fish and crabs were seen inhabiting the fragments on two frames, so it will be interesting to see whether these animals living and feeding within the colony will have any effect on the barnacles. 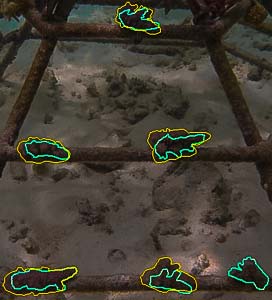 [A]s October has arrived, we’ve reached the 6-month point in our experiment and it’s time to take a quantitative look at how the coral fragments have been growing. At first glance, our results show (perhaps surprisingly) the frame with untreated barnacles has the largest coral fragments; however, when we look more closely at the percentage growth rate of the fragments for each treatment and take into account their original sizes we see that the results are statistically not significantly different.

This suggests the presence of barnacles does not affect the coral growth rate, and the killing of the barnacles also does not have an effect. In fact, it is possible that the killing of barnacles could have a negative effect on the coral survival rate, as one fragment on the treated frame is now dead and two further fragments show partial mortality.

From a procedural perspective, we have noticed that some of the fragments have moved position on the bars, so our measuring technique (using a 2D image) is unable to effectively record these growth rates. For any future experiments it is important to ensure all fragments are fully secured, as well as being equally sized and of the same species (although these parameters didn’t seem to adversely affect our results this time).

In March 2013 we set up an experiment in our lagoon to see the effect that barnacles might have on the growth rate and branching of new coral fragments. The experiment included three frames:

This month we returned to the frames and compared the percentage growth rate of Acropora humilis between each treatment. All the fragments on all of the frames have grown over the last year, with only one fragment on the treated frame having died off within the first six months.
Comparing the different frames shows that there is in fact no significant difference in growth rates for each treatment. The average percentage growth rate for the control and treated frames were the same (71-72%), whilst the untreated frame showed 64%. All the fragments have grown multiple branches, and barnacles are now living in all the Acropora humilis fragments. 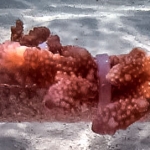 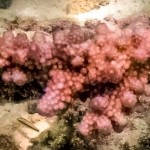 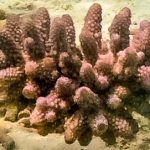 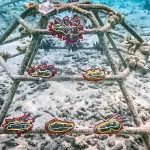 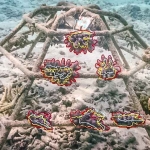 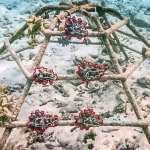