Tiff, a female Olive Ridley turtle, was found floating and unable to dive close to Hurawalhi resort (Lhaviyani Atoll). She has cracks on her shell (likely caused by a boat strike), causing lung damage that means she is buoyant and unable to dive. She had X-ray and ultrasound examinations and it was discovered that she has lung tears, causing a build up of air inside her shell.

On 4 March 2019, Tiff was transferred from the ORP to our turtle rescue centre at Landaa Giraavaru. She was a fussy eater at first and would often refuse food, however she has now started to eat everything! 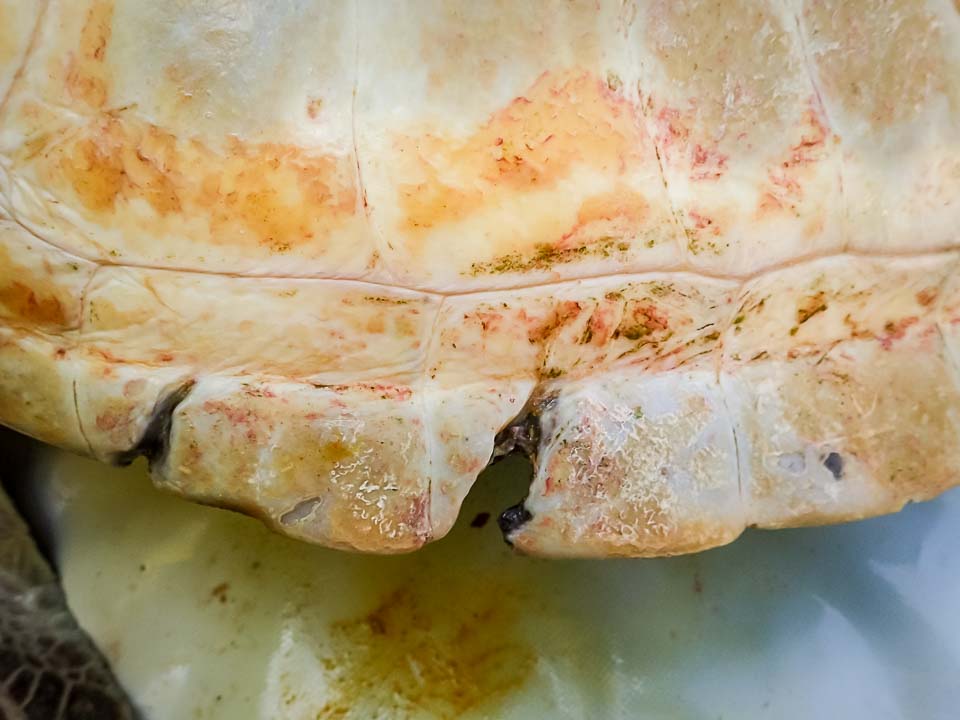 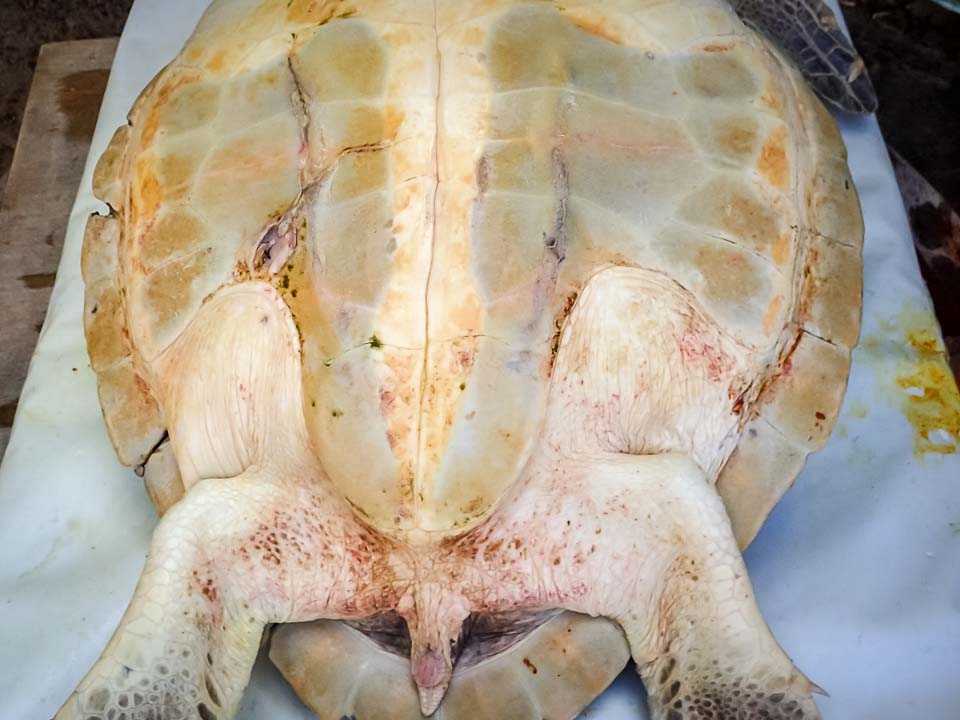 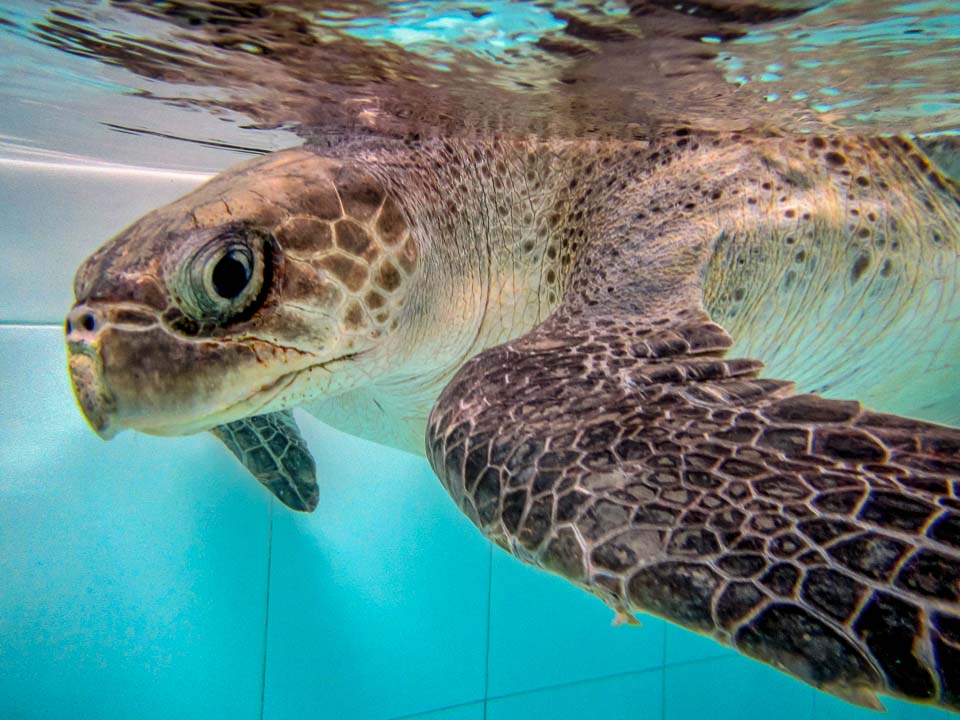 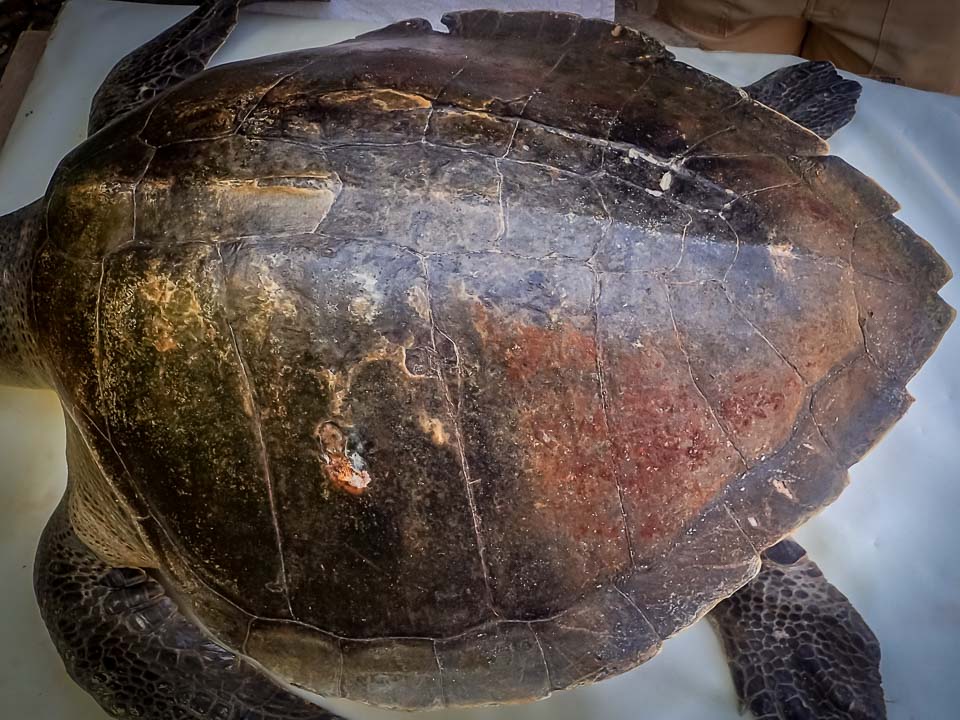 Tiff was quite restless in her recovery pool, so we have transferred her to our sea enclosure out in the lagoon. She now has much more space to freely swim around.

After spending most of May in our enclosure out in the lagoon, we took Tiff back to Centre. We had noticed some sea lice in the wound on her plastron, so gave her a 24h bath in fresh water to remove them.

Tiff appeared to be much less stressed since moving across to a more spacious pool. Her carapace wounds are healing well but still receiving topical treatment weekly during the turtle day-care sessions.
Tiff was taken out for a swim in the lagoon, and attempted multiple dives. On one occasion, she dived down to 15 metres, and we had to free-dive to retrieve her! Tiff is definitely keen to return back to the wild, however in the recovery pools she is often still buoyant and unable to dive.

Tiff’s carapace wounds are healing well and she is still receiving topical treatment weekly, during turtle care day. She has been taken out for continuous swims in the lagoon, and she is attempting multiple dives. She is appearing less buoyant and is able to dive down for her food in the rescue pools.

On 26 October, we transferred Tiff to our turtle rehabilitation enclosure out in the lagoon at Landaa. After settling in for a few days, she is now able to swim and dive, remaining submerged for more than 10 minutes. She is enjoying the extra freedom and the large space afforded by the net, and we hope she will be ready for release soon!

Tiff had been doing well in the turtle enclosure, and was able to dive and rest on the bottom. After some time gaining her diving strength in her new home, she was released on 4 January (our first release of 2020!)