Issues: Found floating, missing both front flippers (previous amputation showing signs of healing), underweight, and unable to dive. The turtle arrived with algae and gooseneck barnacles on the carapace, suggesting the turtle has been floating for a long time. Greg Turtie also suffers from corneal ulcers, limiting his vision. Due to these severe injuries, Greg Turtie will never be released.

Greg Turtie is a double front flipper amputee, most likely caused by entanglement in drifting ghost fishing nets. These injuries were healed upon arrival. He had significant algae and barnacles on the carapace, indicating an extended period floating which had caused dehydration and low weight. Additionally, he suffers from severe corneal ulcers which have caused a significant decrease in vision.

Greg Turtie is receiving twice-daily eye treatments, and whilst the left eye is showing improvement, the right eye may have permanent vision loss. He has a healthy appetite and has started to gain weight, but most likely can never be re-released into the wild with missing front flippers. 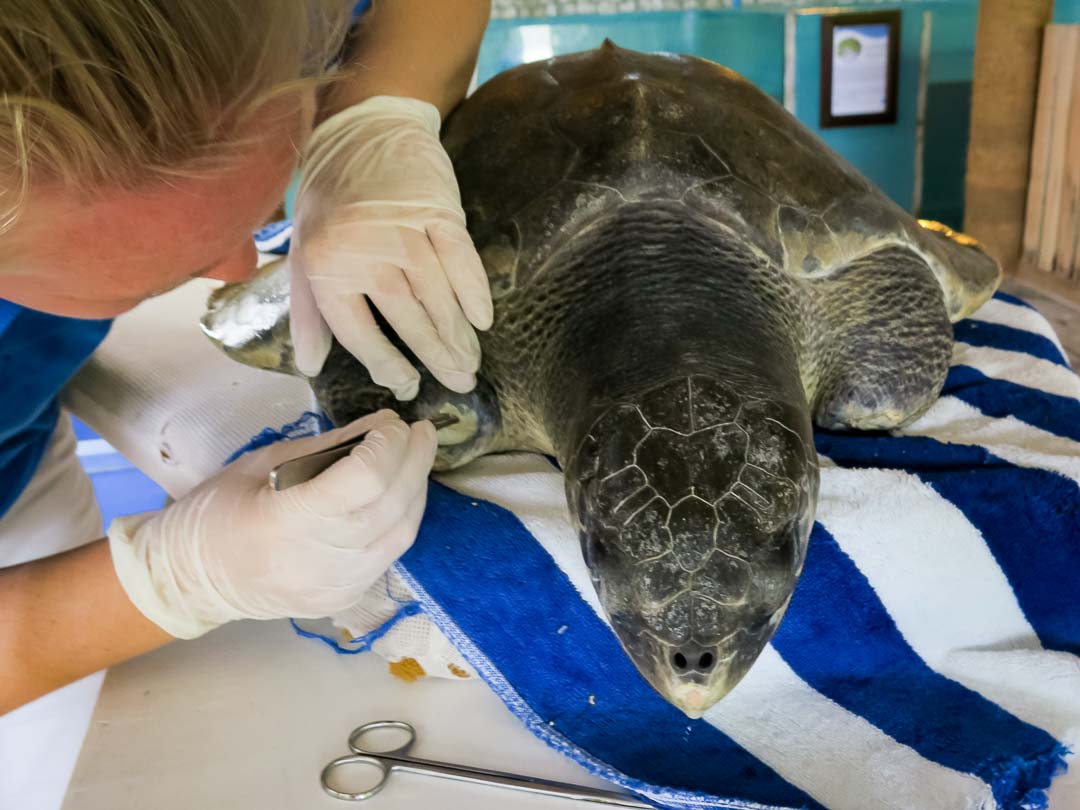 Update (8/06/2016): Greg Turtie’s vision is beginning to improve in his left eye and is now responding to food places on this side. We will continue to give Greg Turtie antibiotics and provide eye care several times a day.

Update (26/06/2016) Greg Turtie is now responding to food placed on both sides meaning his vision has returned. This is also visibly noticeable by the lack of white dots in the eyes that are indicative of corneal ulcers. We will maintain the turtle’s current treatment of antibiotics and eye care to ensure vision is fully restored and prevent a re-occurrence.

Update (11/07/2016) Greg Turtie has improved significantly since his arrival, gaining sight back in both eyes after prolonged medical attention and all treatment has been discontinued. As a result he has become much more comfortable in the water and has a substantial appetite, eating everything offered. Greg is slowly gaining weight and using his back flippers more to maneuver around the pool to chase his favorite food.

Update (13/07/2016) Greg Turtie has stopped eating and shows no interest in food when offered. Staff noticed a sore in Greg Turtie’s mouth that may be causing him discomfort. Turtle has been put on a different antibiotic.

August 2016
Greg Turtie is currently off all medications but is being monitored closely for any changes that may indicate a health issue but still continues to receive a multivitamin and calcium daily. To assist Greg Turtie in his swimming abilities, he is currently being target trained using a target pole. Greg Turtie is very eager during sessions and has quickly developed the relationship between his target and receiving food. Over time, we will be able to use his target behavior to move him to different points in the pool encouraging him to swim more and hopefully teaching him how to dive. With the start of session – 3 clicks of the clicker in the water – Greg Turtie quickly looks around the pool for his target and immediately comes to get rewarded. He has even already begun to follow the target to different areas of the pool; we just have to work on him not biting it. Unlike most of our turtle residents, Greg Turtie does not like to be touched by humans making training him a little more tricky but he has already showed excellent enthusiasm everyday!

Greg is doing excellent during training sessions and is now competent in:
– “follow behaviour” – he follows his target allowing him to be brought to a specific spot;
– “stationing” – remaining at a target in a calm manner allowing for him to be fed and checked over.
We are currently working on developing Greg’s husbandry skills so that he can participate in his own care by allowing for staff to touch him without causing stress, for Greg to present his flippers and eventually be trained for voluntary blood draws. These behaviours will allow him to transition to a permanent facility easier.

December 2016
Greg continues to not utilise the back flippers for swimming; this could be a symptom of confinement in our recovery pools. To test for this, Greg was taken for an ocean swim as ‘enrichment’, to see if the additional open space would increase mobility (photo, below). We chose a calm and tranquil day, however once in the ocean, Greg showed signs of elevated stress and had to be returned to his normal pool. No additional ocean swims are planned for Greg due to drastic changes in behavior after this initial trial. 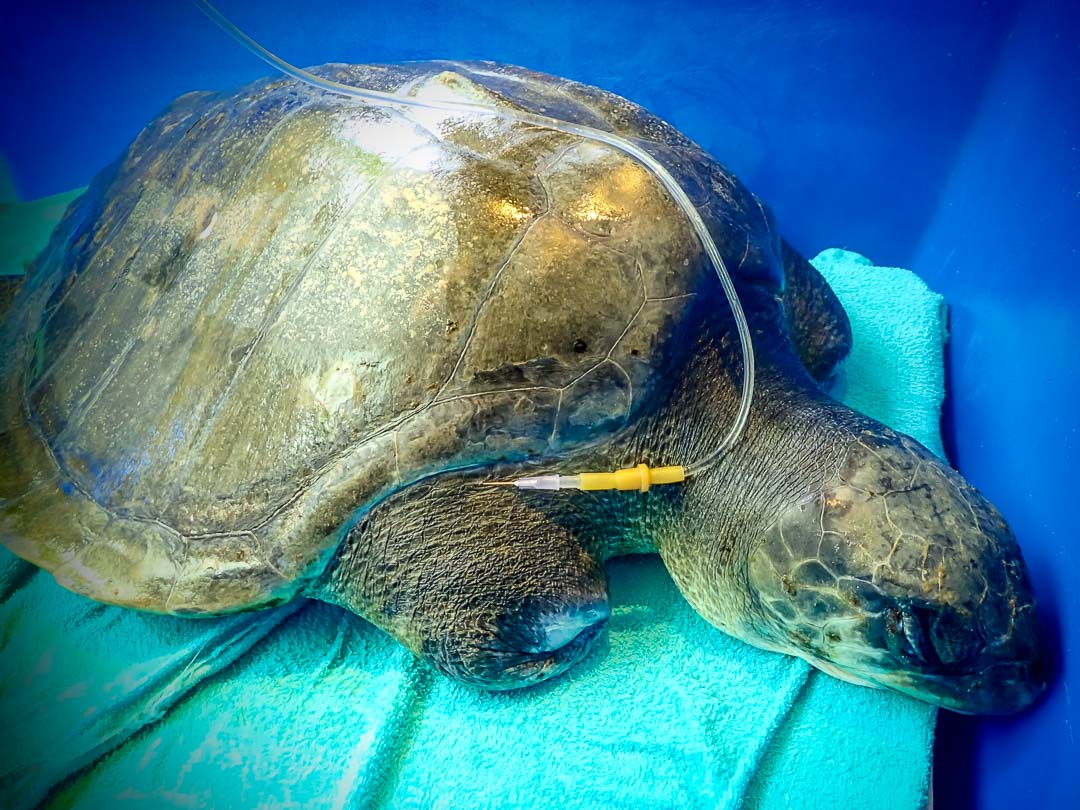 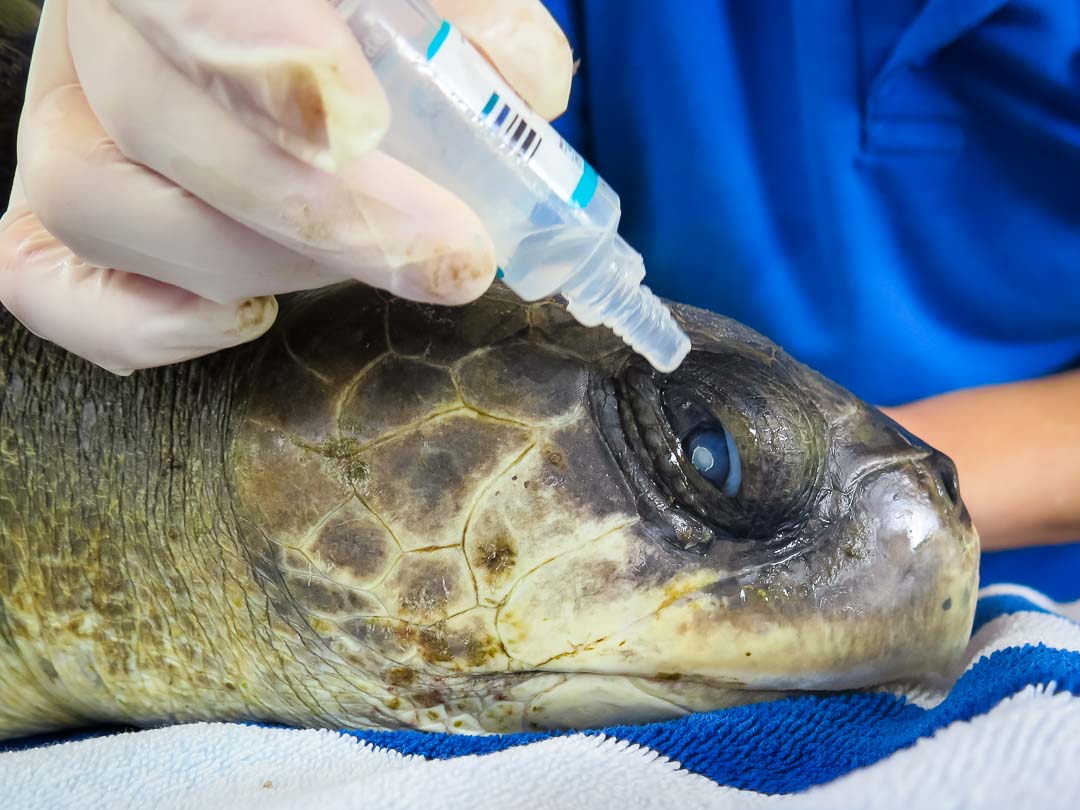 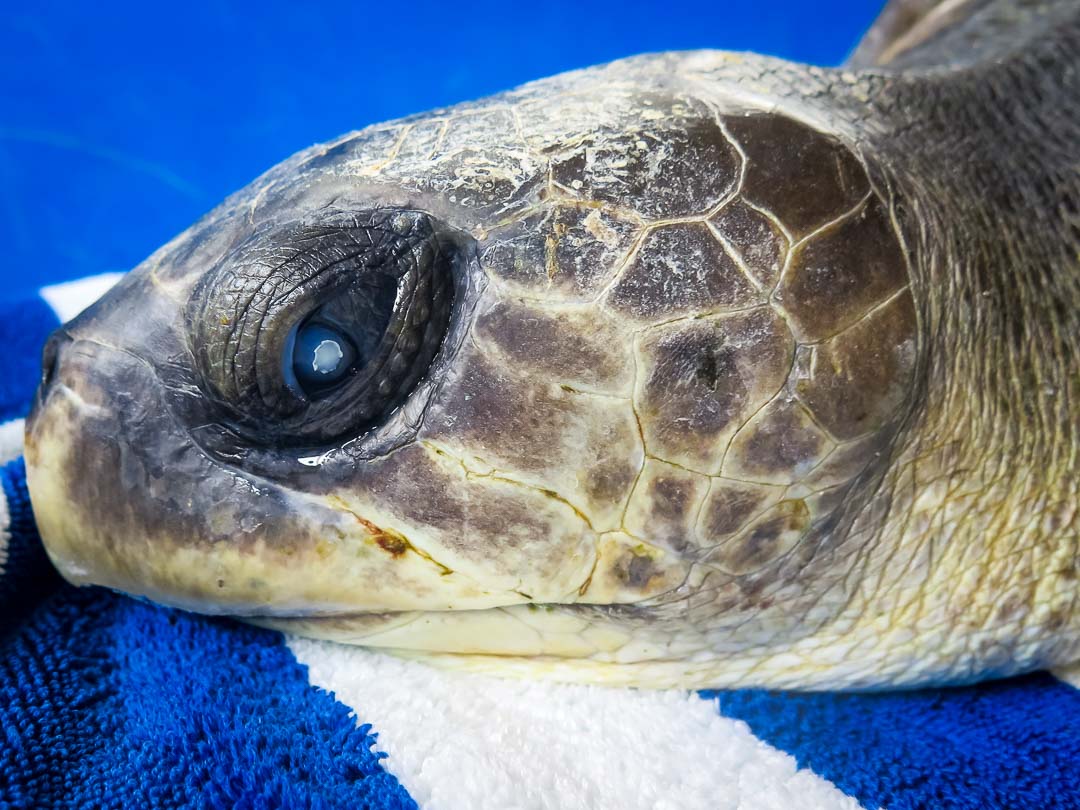 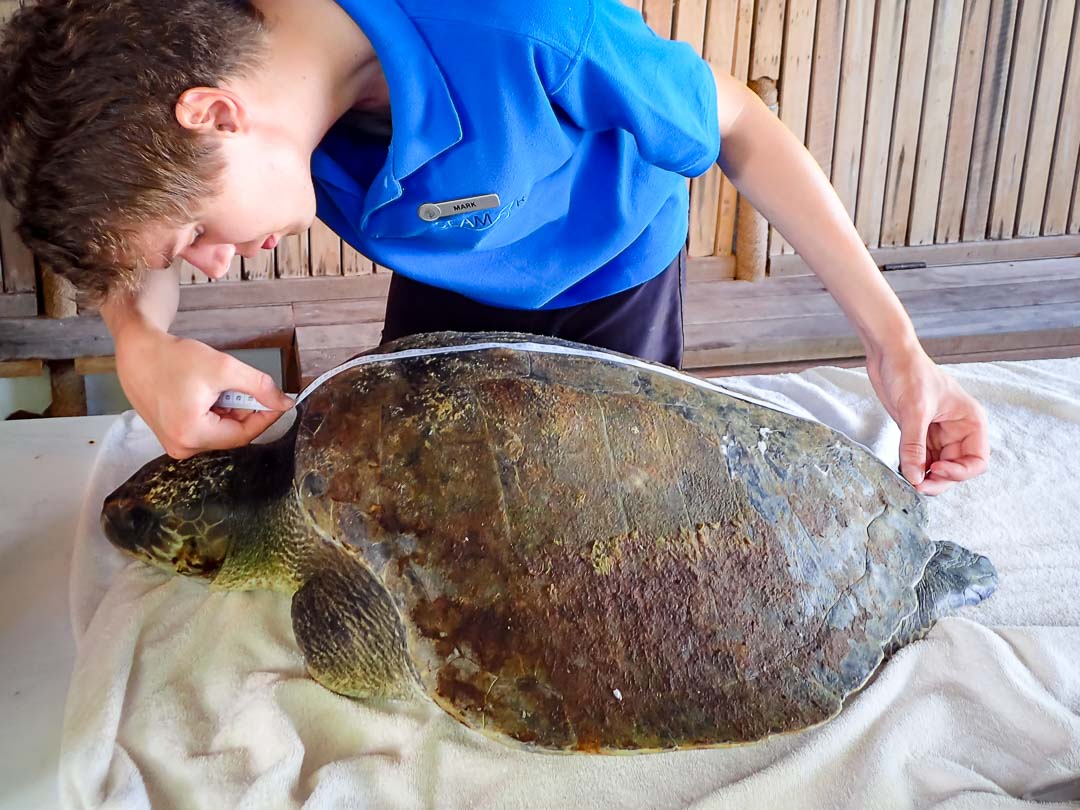 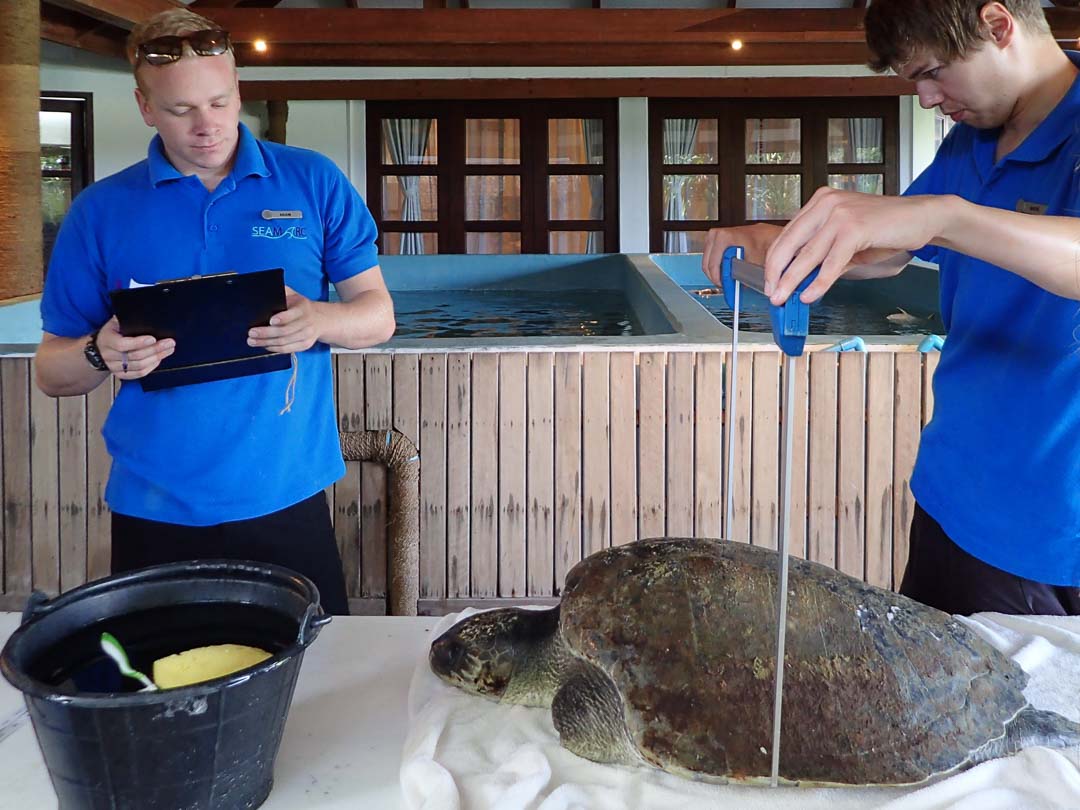 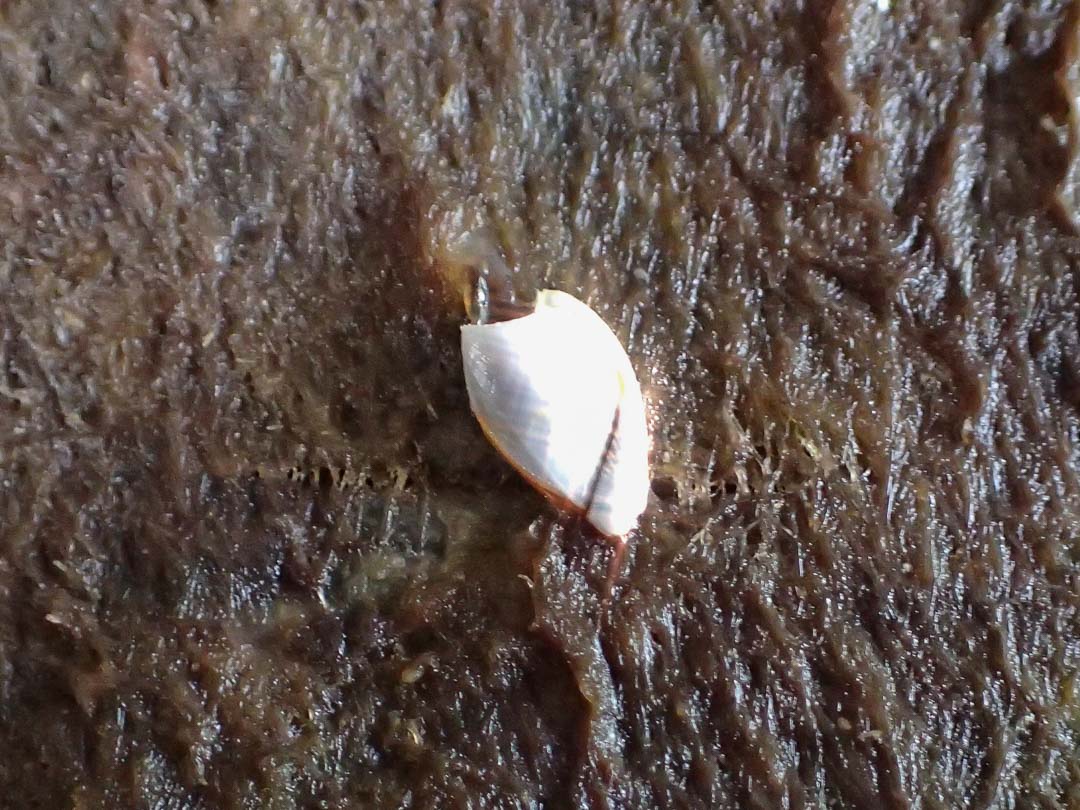 January 2017
Greg has become very interested during training sessions and has made tremendous progress this month. With the help of previous guests, WWF is helping us to find Greg a permanent home overseas.

February-March 2017
Greg has continued to maintain a healthy weight, and is responding very well to his training sessions.
Throughout March, five of our Head Start green turtles have been added to the pool, to increase swimming activity and interest in food.

Jun-July 2017
Greg continues to maintain a healthy weight, responding very well to his training sessions. Throughout July, Greg has been sharing a pool with Thakuru.

Aug-September 2017
Greg has been keeping a regular diet, and is now sharing a pool with both Thakuru with Stumps. He has become very social and always likes being scratched on the carapace. 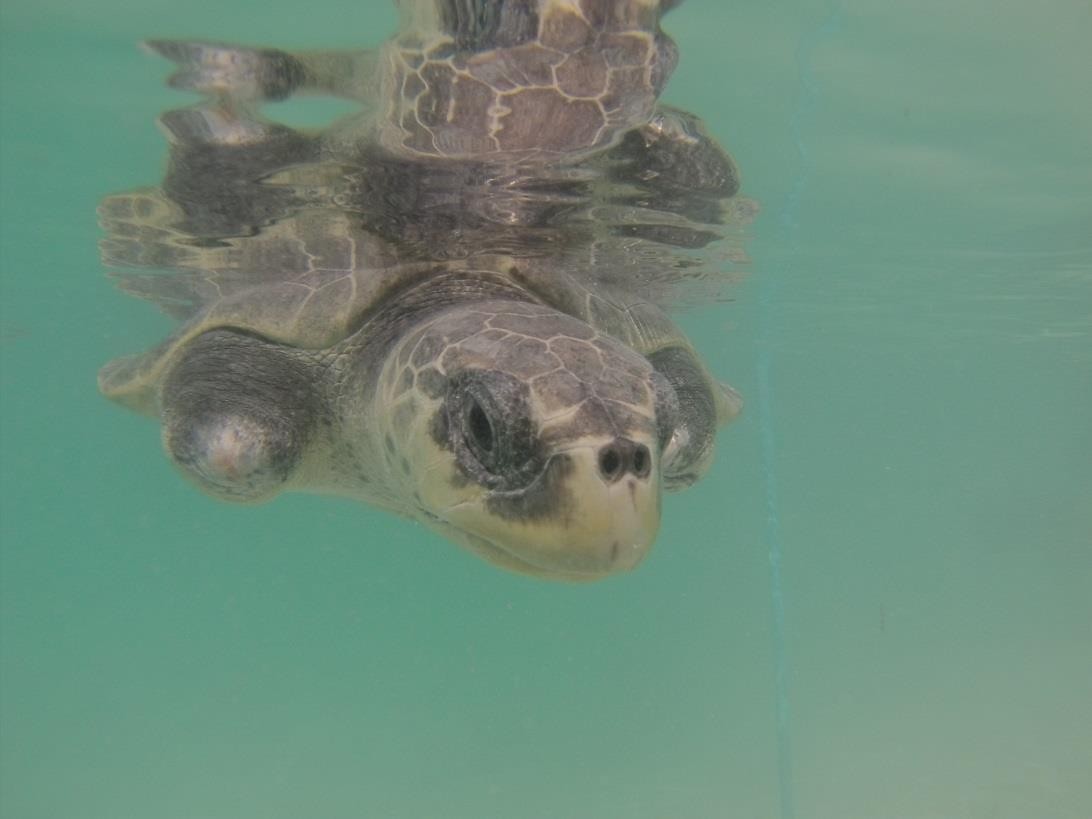 As part of the rehabilitation process, we allowed Greg to swim in the open ocean for a while 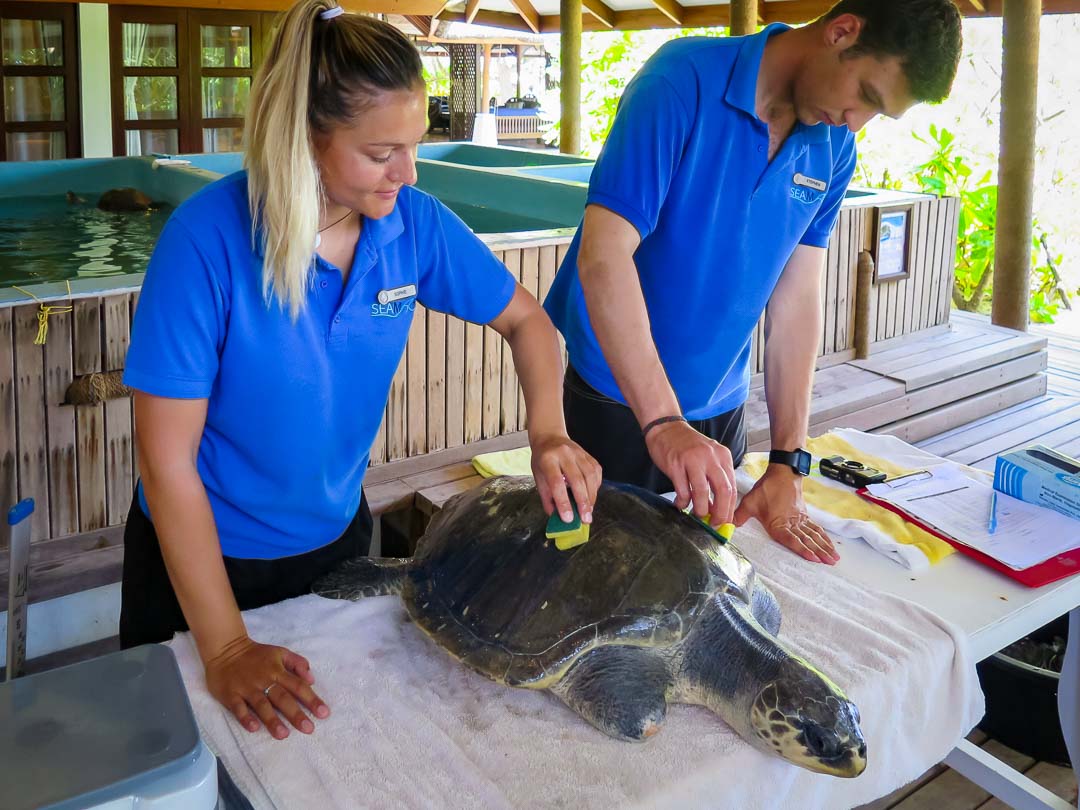 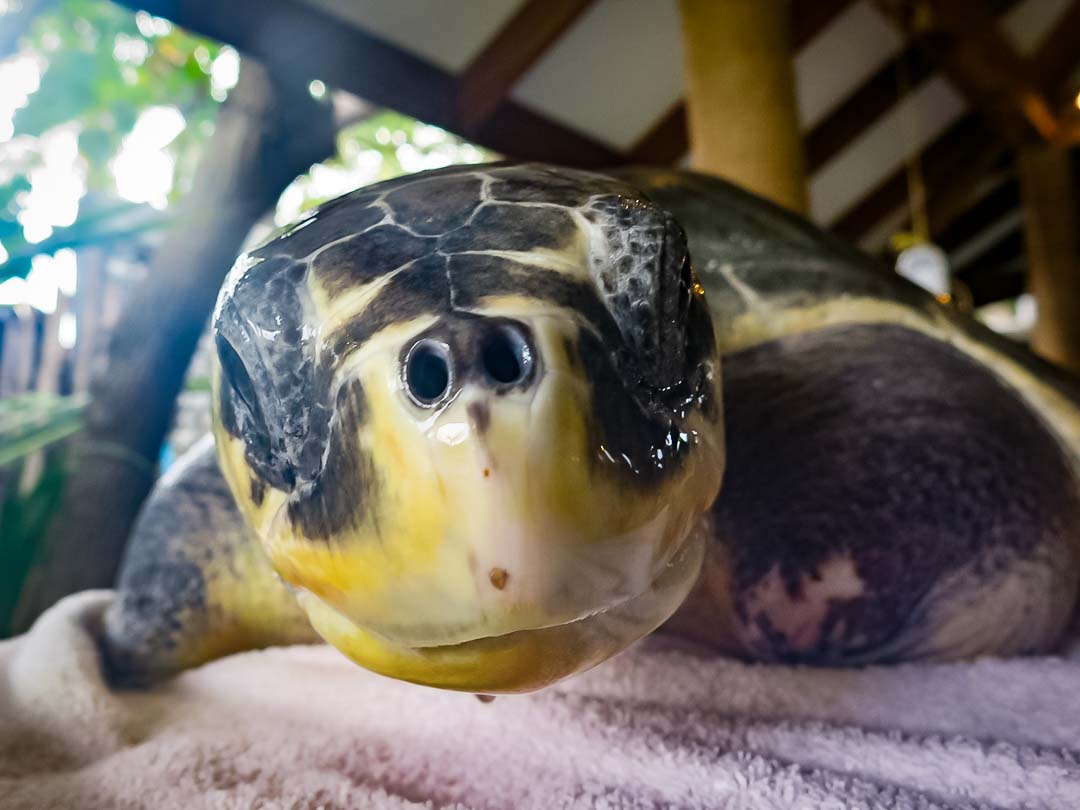 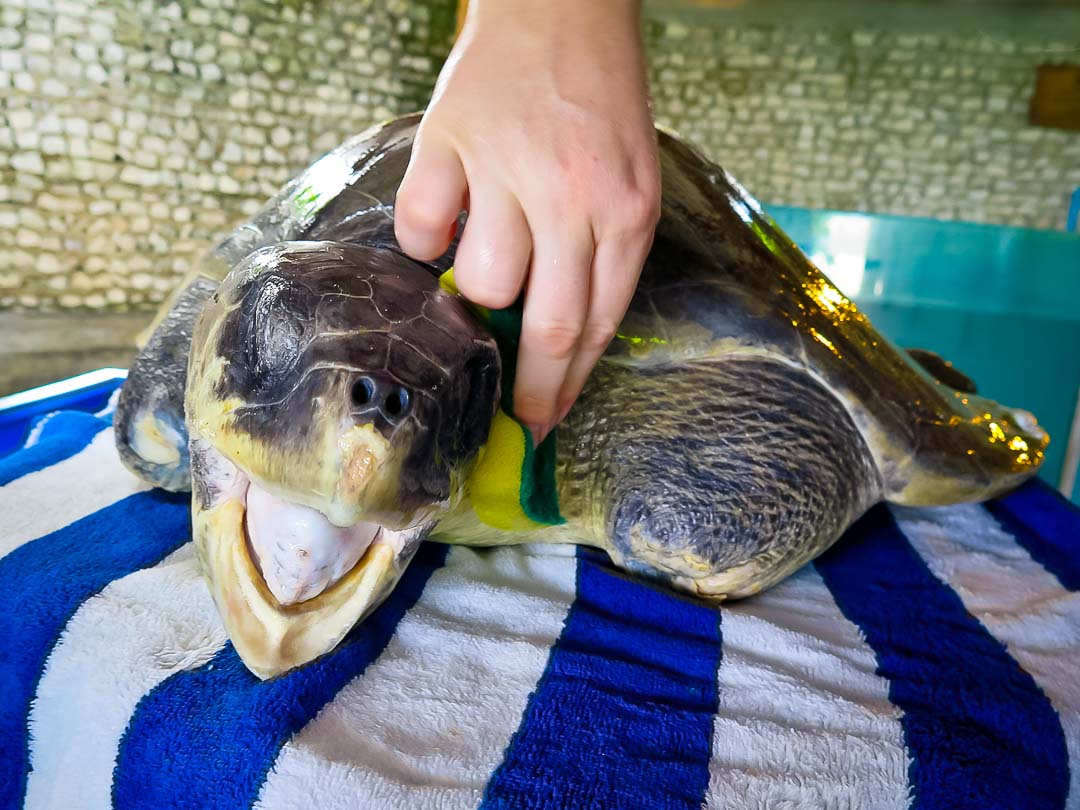 March 2018
Greg started to have seizures on 7 March, and sadly died the following day, from unknown causes. Greg will be hugely missed by the whole team. 🙁