BCD was found floating in the ocean by Kuda Huraa’s Dive Centre, unable to dive and in obvious distress

BCD’s appearance is deceiving due to the extreme excess of trapped air in the turtle’s body, making the turtle appear to be of healthy body weight, however BCD is emaciated.

BCD is very active and attempting to dive in the pool. To decrease the amount of air in the body, the turtle has been put on anti-gas medication, antibiotics and gut motality enhancers, and we are providing fluid therapy. With the use of coelomocentesis techniques [*], over 4 litres of free air has been removed, which has already allowed for improvements in the turtle’s diving.

[*] Coelomocentesis – This method may be used to tap the coelomic cavity for fluid or gas if noted. There is no diaphragm in sea turtles to separate the thorax from the abdomen, so the large common cavity is referred to as the coelom. If the turtle is tilted sideways, the down side can be used to sample fluid and the up side can be used to drain gas. Injectable medications can also be put directly into the coelom.

February 2017
BCD was making slow progress in diving in our largest pool, shared with 2 other rescue turtles, and we soon realised he wasn’t the biggest fan of sharing space ! So we relocated BCD to a different pool with one of our smaller green sea turtles (who loves to swim circles around him). Since moving, BCD is more calm and increasingly interested in feeding times. His removal from the ‘competition’ pool has given more time to concentrate on swimming, and he has recently been spotted resting on the bottom of the pool.

7 March 2017
After 45 days of intensive rehabilitation it was time for BCD to return back to the ocean. Having only been admitted with superficial wounds, we knew the biggest obstacle to his release was buoyancy.
We are thankful that BCD quickly acclimatised to our recovery pools, and was especially keen on our hand-fed lobster dinners! Within a month, he was able to dive with ease and we would often see him resting on the bottom of his pool, watching the young green turtles swimming overhead! He gained an impressive 2.3kg in weight, and his increased activity told us he was ready to go back to the ocean!
On 7 March 2017, BCD was successfully released along side his Olive Ridley friend Valentino. Both turtles went off without any problems, swimming away from the boat and exploring the reef below. Bon voyage! 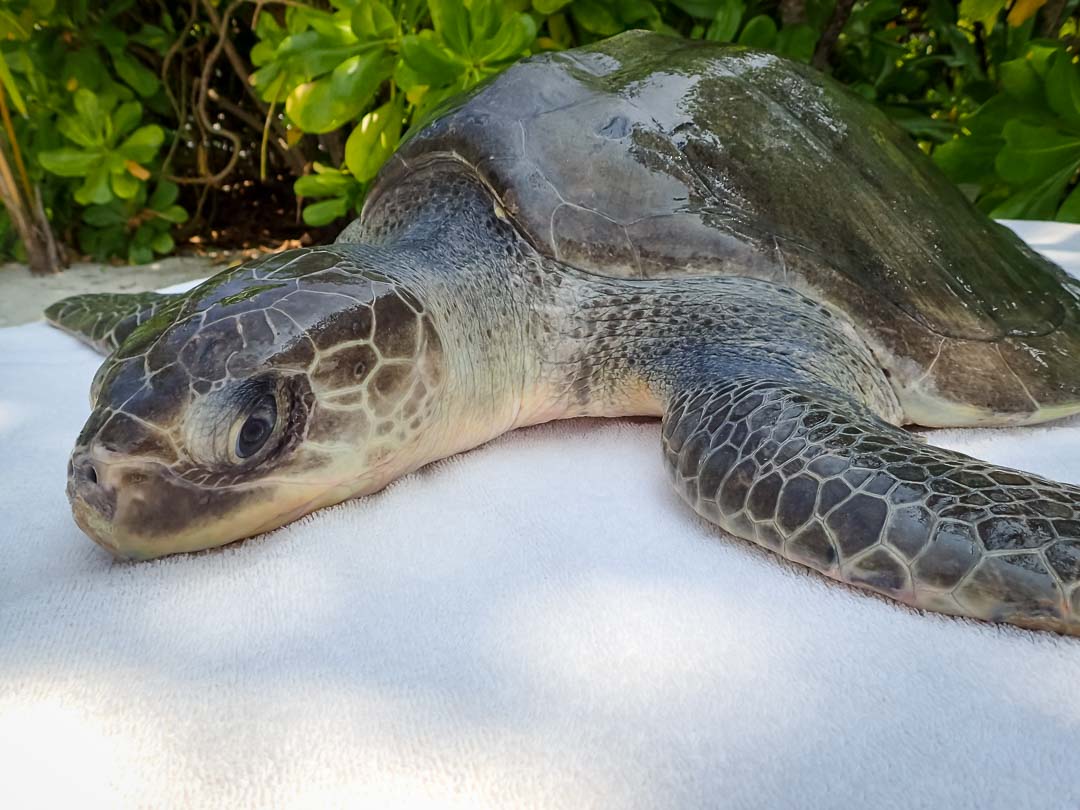 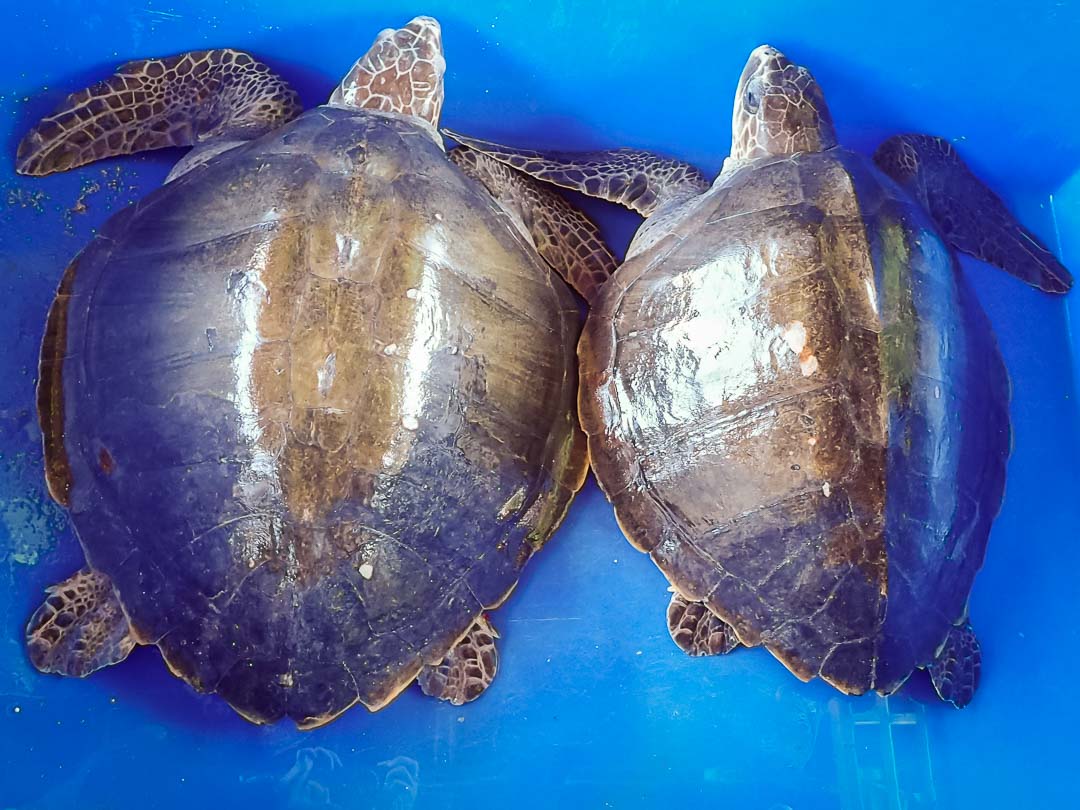 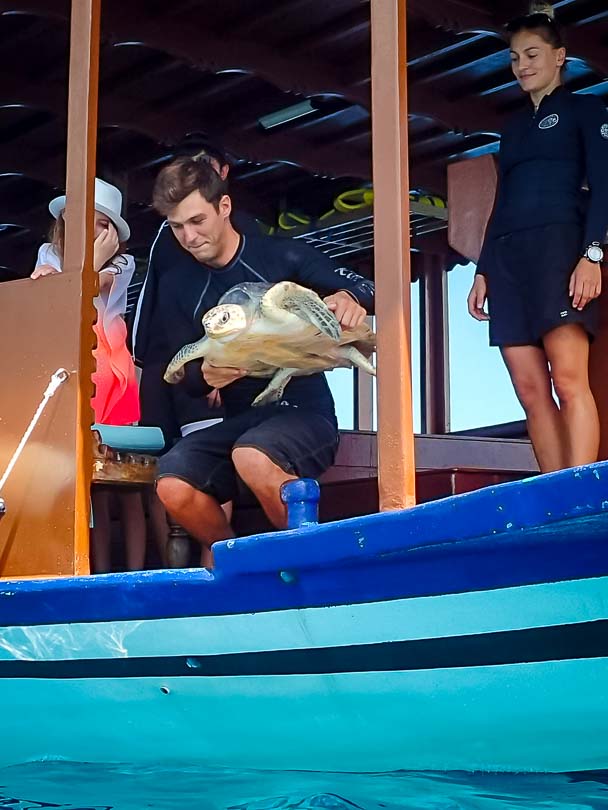 BCD was released along with Valentino, from a dhoni on a guest excursion. 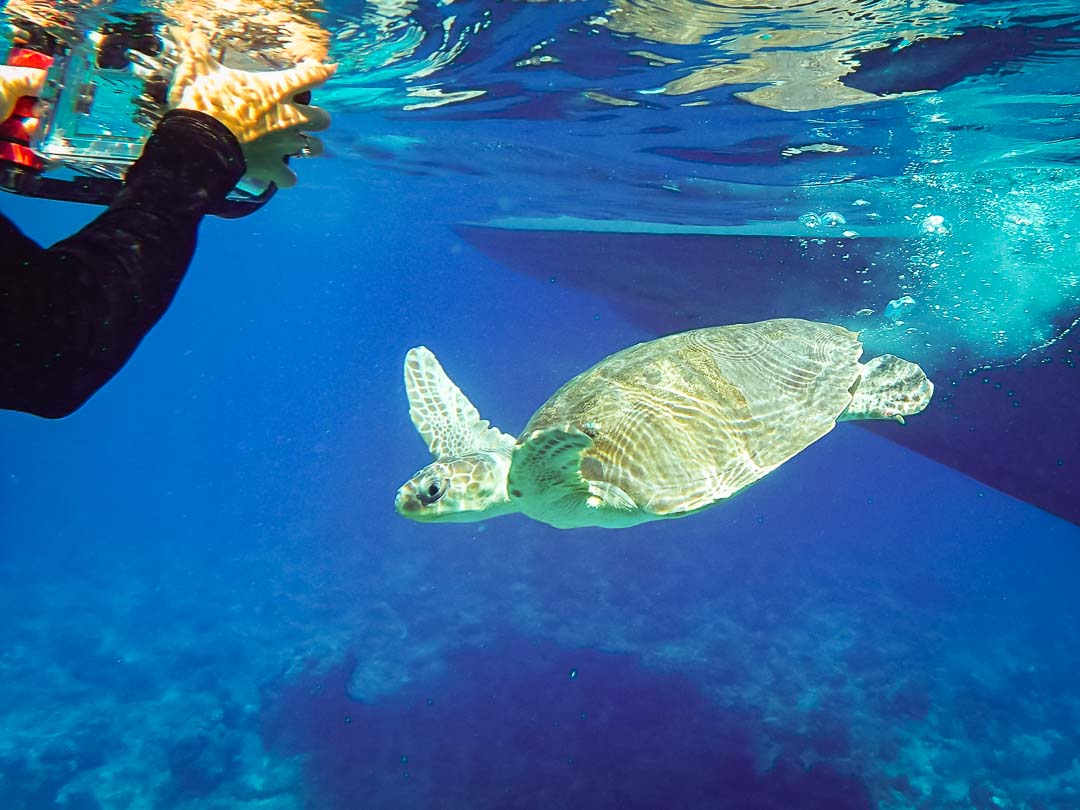