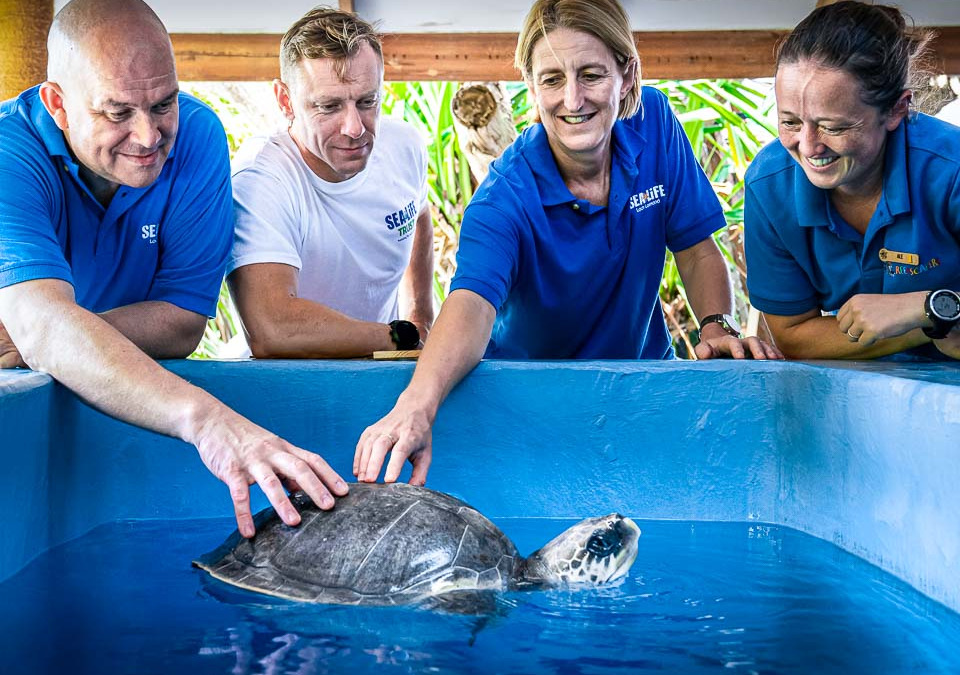 ‘April’ is now our sixth “Flying Turtle” ✈ to find a safe new home overseas.
Read the full story of her intrepid journey, as she leaves Kuda Huraa on a VIP transfer … heading all the way to Scotland for a bagpipes welcome!
A huge thank you to the SEA LIFE team for giving ‘April’ a new lease of life in her professional aquarium home.

Catch up with this month’s turtle rescue updates direct from Landaa Giraavaru MDC.
Say hello to Naushad – our largest ever Olive Ridley turtle – and wave goodbye to Andy, who recovered well after his flipper amputation and is released back into the ocean.

Get up-to-date with all our latest marine turtle conservation news and updates from June.
Read about our current residents & their latest rehabilitation treatments, and watch the slideshow from our latest turtle releases.

Rehabilitation updates for Olive Ridley rescue turtles ‘Jessica’ and ‘Slicer’, and we satellite-tag another reared Green Turtle as part of our Head Start release project.

All the latest updates from our centre at Landaa Giraavaru, including recent turtle rescue photos and an exclusive look into our expansion plans.

Turtle Rescues – Latest Updates for May

May 2013 is already shaping up to be another record-breaking month at Landaa with three turtle rescues in the first 10 days! Say hello to our latest residents – ‘Olga’ and ‘Milano’.
UPDATE (19 May) : Photos of Milano’s beach release back into the ocean.

April is a Record Month for our Turtle Rescue Team

April saw a record total of six turtle rescues at Landaa Giraavaru! All of the animals were found entangled in ghost nets, but fortunately four of them were healthy enough to be returned immediately back into the ocean.
LATEST: Now updated with photos of Igor’s release on 10 May.

Catch up with our March updates from the Turtle Rehabilitation Centre.
We have Hawksbill hatchlings from Kihaadhoo, and we try a new technique to help with buoyancy issues seen in our patients.

A special rescue mission at Landaa Giraavaru: the freeing of a turtle that was entangled in a discarded fishing net, allowing it to swim away without any further treatment. Watch our exciting slideshow of the rescue. 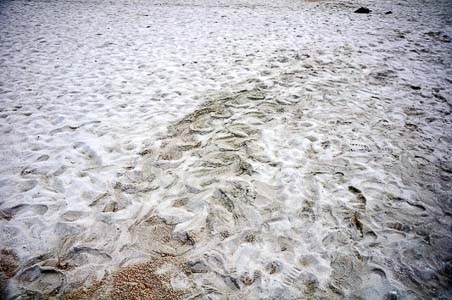 During the early hours of January 4, we received notification of a surprise visitor to the Blu Beach area … a large turtle!

The latest turtle to be brought into our rehabilitation centre was rescued by islanders from our neighbouring island of Kihaadhoo. 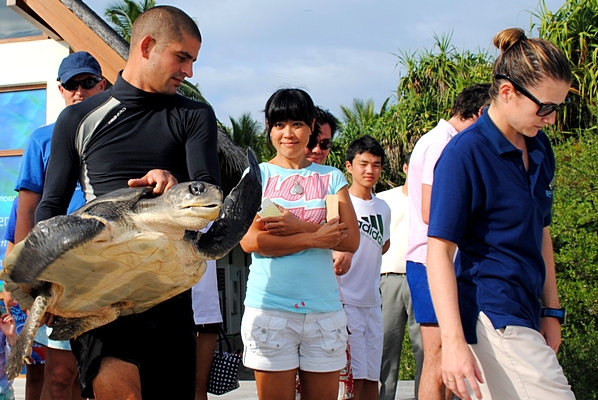