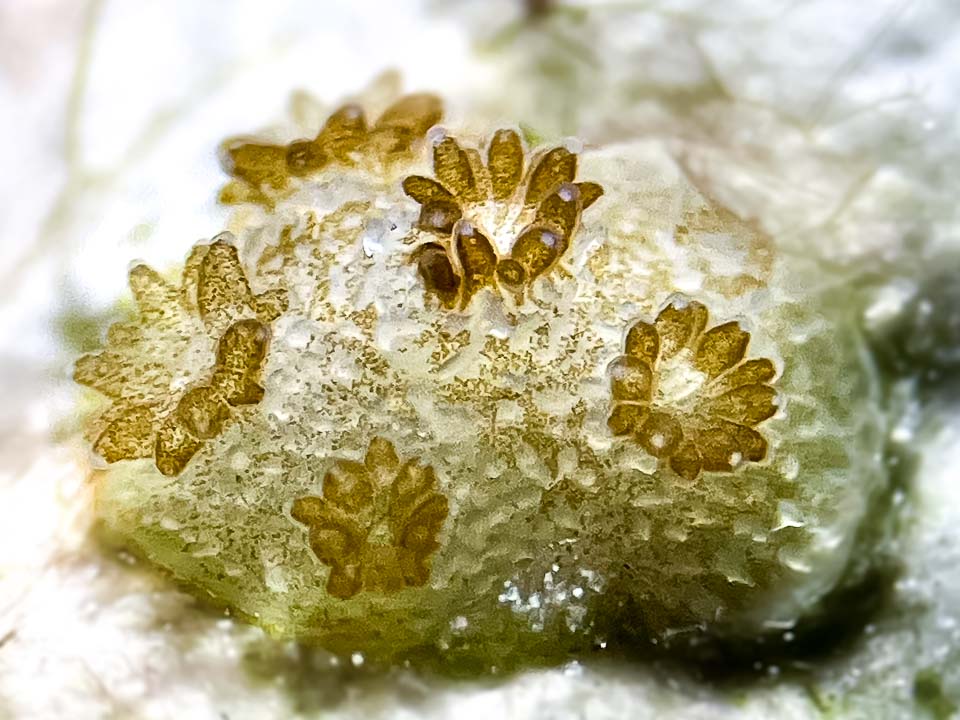 Uptake of symbiodinium in our juvenile coral polyps (Acropora humilis)

Coral Spawning in the Maldives 2022 Updates 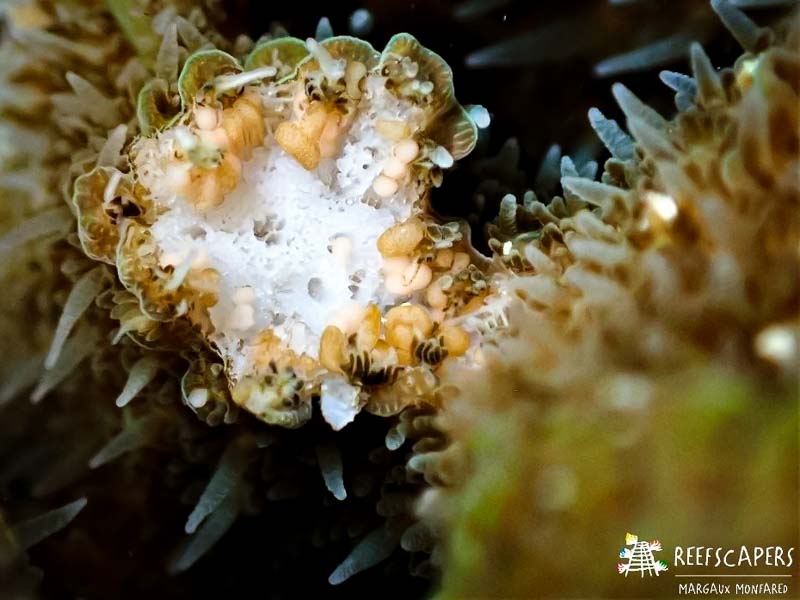 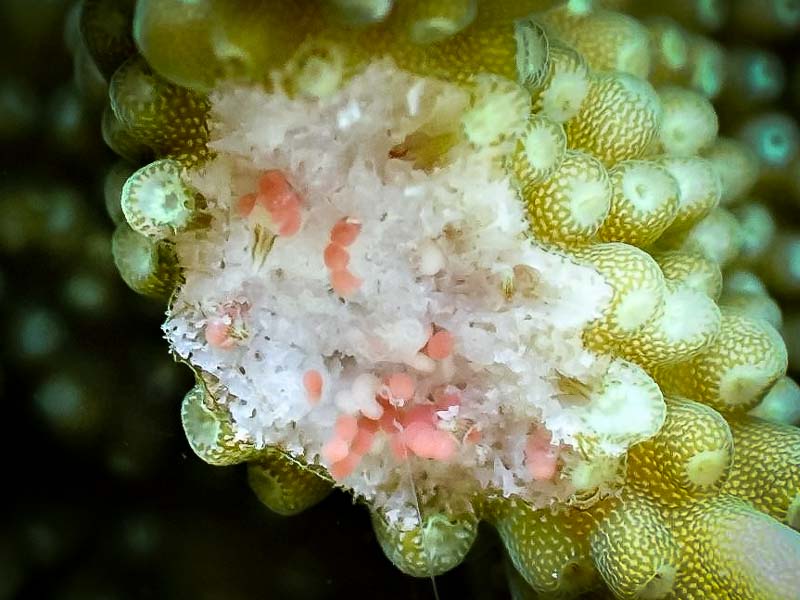 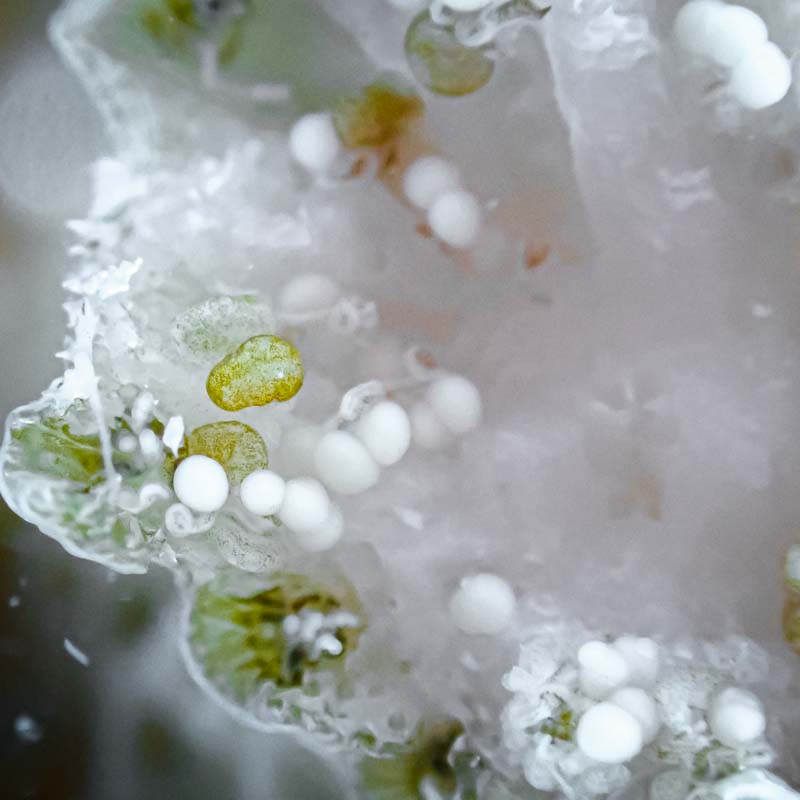 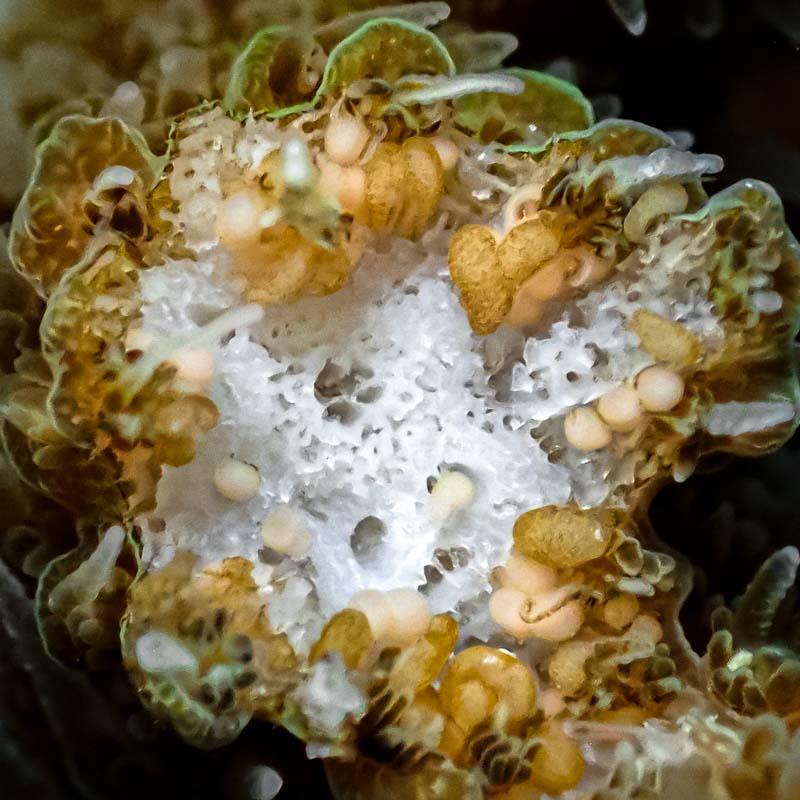 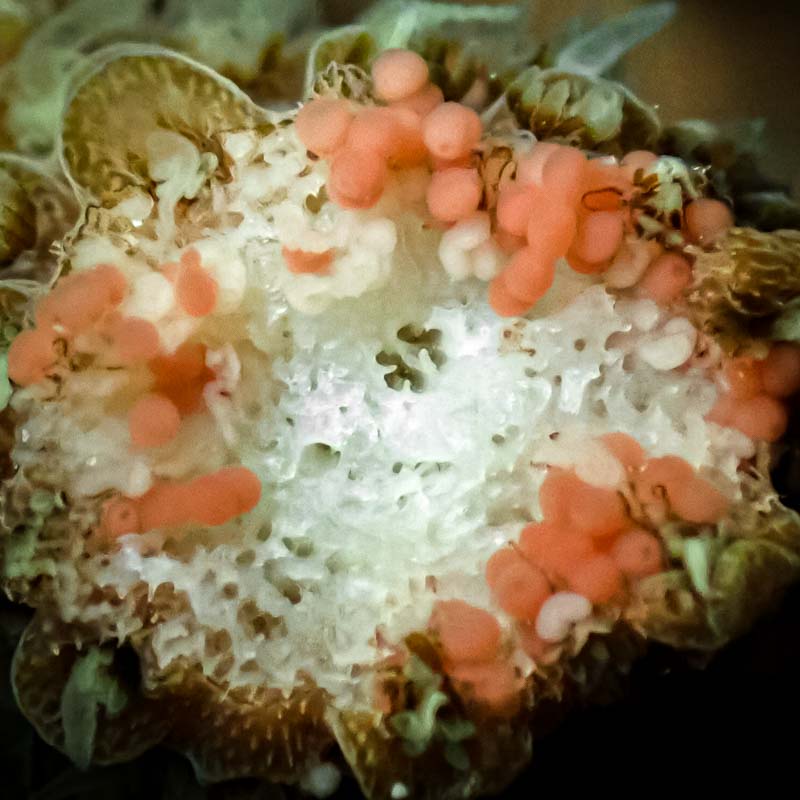 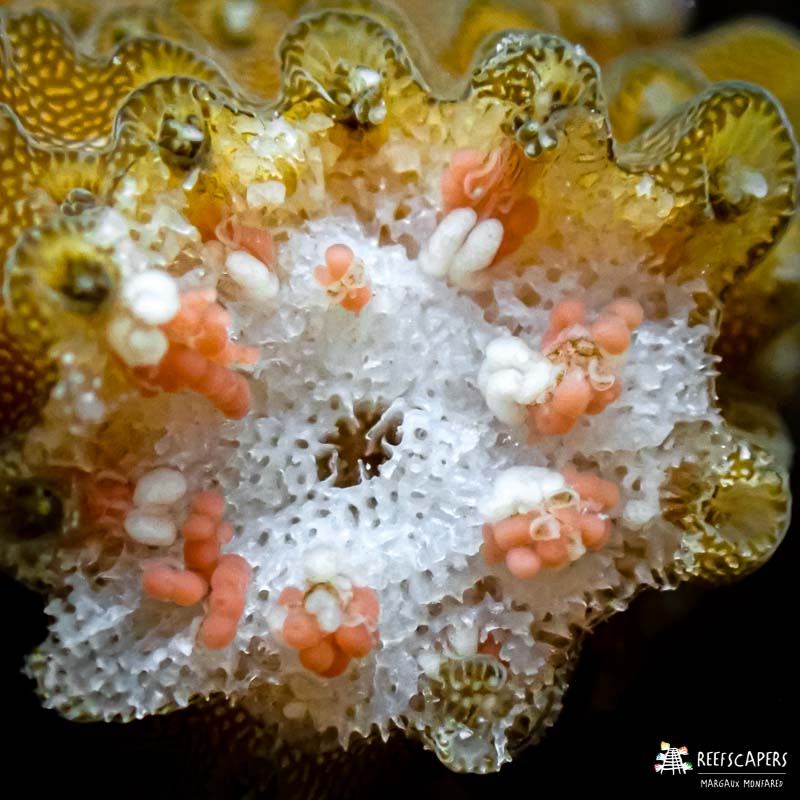 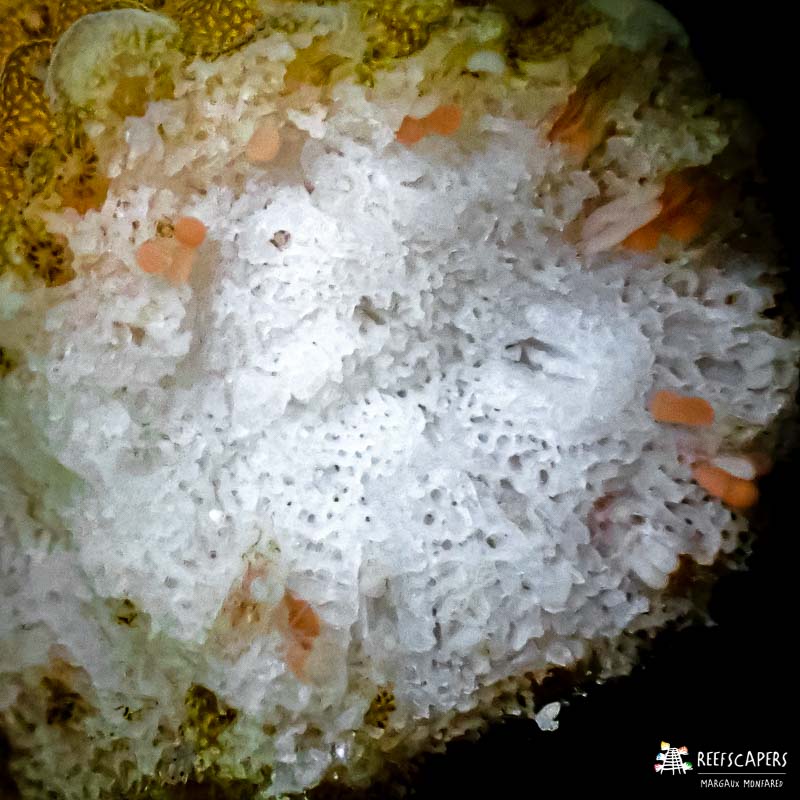 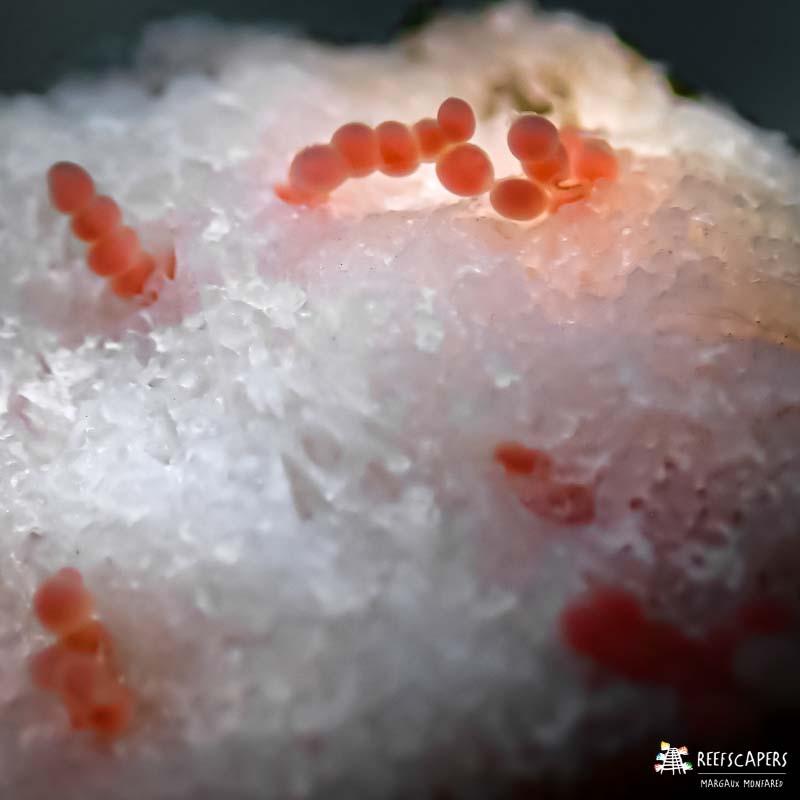 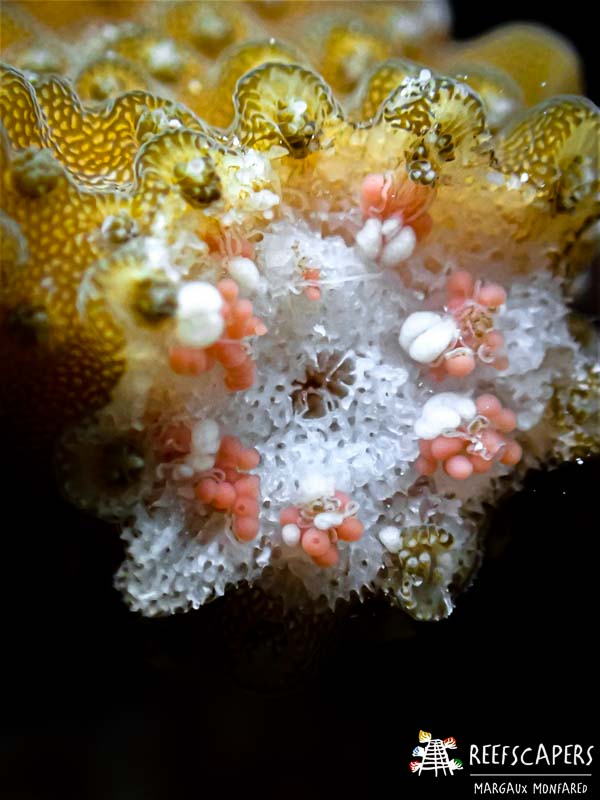 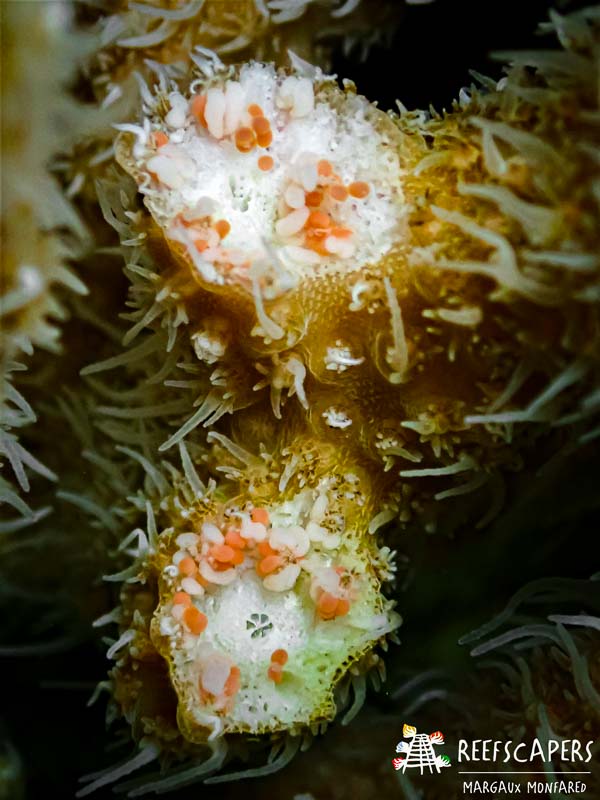 Uptake of Symbiodinium Zooxanthellae in our Juvenile Coral Polyps

On 5 January 2022 (4 to 6 weeks post-settlement), our juvenile corals (Acropora humilis and A.plantaginea) acquired their zooxanthellae through horizontal transmission (Baker, 2003; Quigley, 2017). Photosynthetic algae (symbiodinium) provide corals with up to 90% of their food source. Due to the high filtration system within our aquaria, we introduced fragments of the same species into the tanks, which we believe was the key to the uptake of symbiodinium. We will test this theory through a controlled set-up during the next coral spawning event, to determine the true uptake capacity of symbiodinium in our aquaria. In addition, we lowered light intensity to reduce opportunistic algal growth that can inhibit coral survivorship by shading from light (Box, 2007).

Each individual coral polyp can begin cellular division at a size of 0.2cm (Vermeij, 2008) as evidenced in our juvenile coral polyps, dividing from one to two/three polyps. Raymundo (2004) described juvenile polyps that fuse within eight months of settlement are seen to increase survivorship, in comparison to those that did not fuse. Cruz (2017) demonstrated the fusion of 31 colonies grown from settled larvae grew into one large colony that was sexually mature after just three years. The high settlement/fusion rates within our aquaria are also evident, suggesting a strategy to obtain larger mature coral colonies more swiftly. This coupled with our asexual propagation technique would enhance genetic diversity, complexity, and abundance of Scleractinian coral within a Maldivian reef bionetwork. 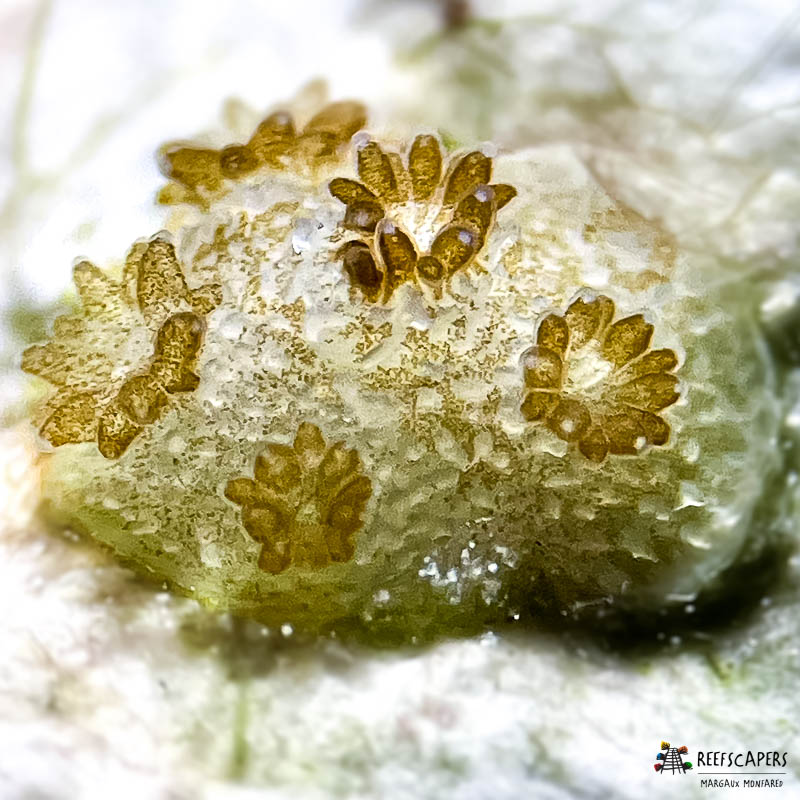 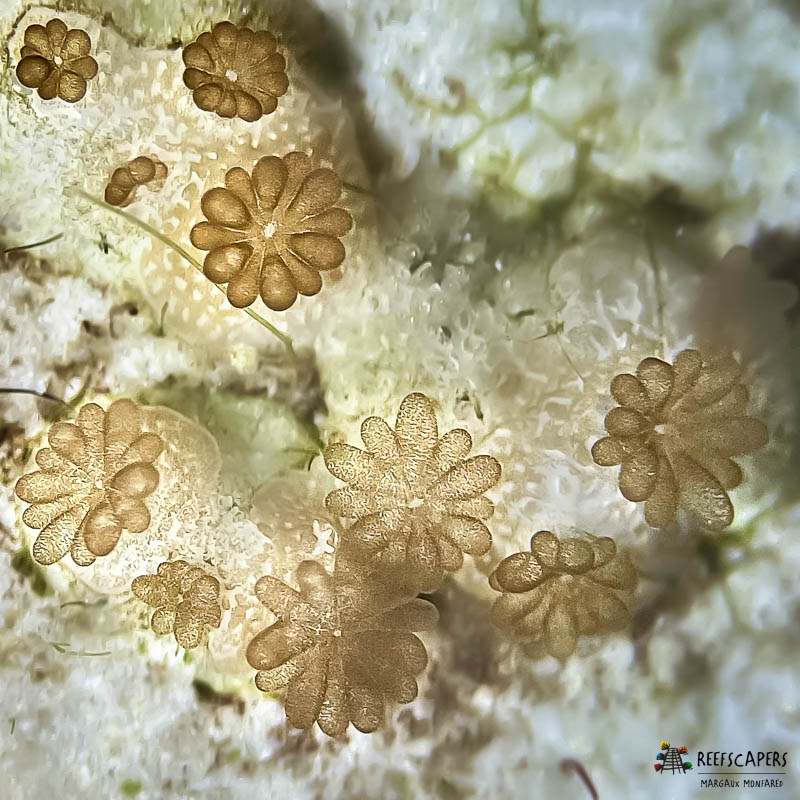 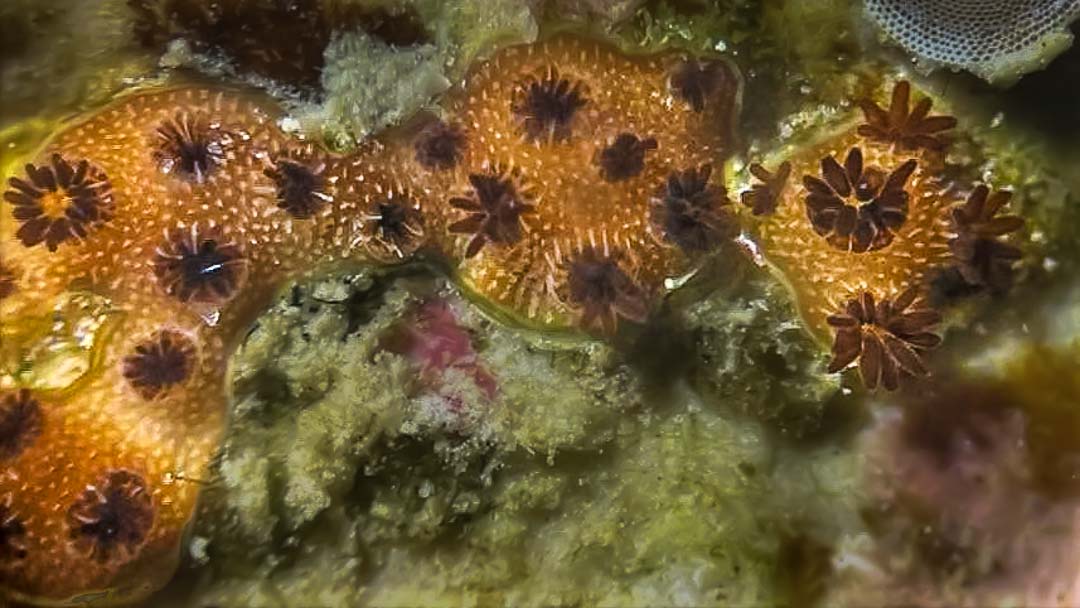 Same Goniastrea colony spawning in different places on 2 consecutive days (20-21 March 2022); bundling through to spawning (below) 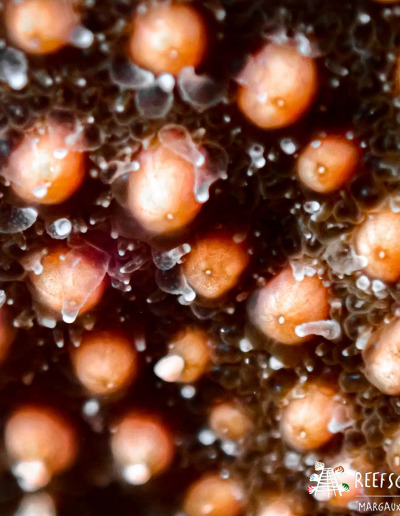 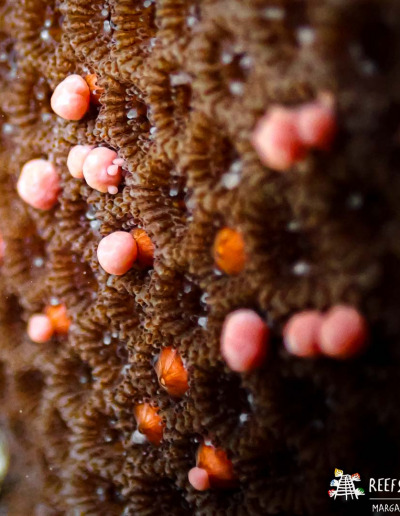 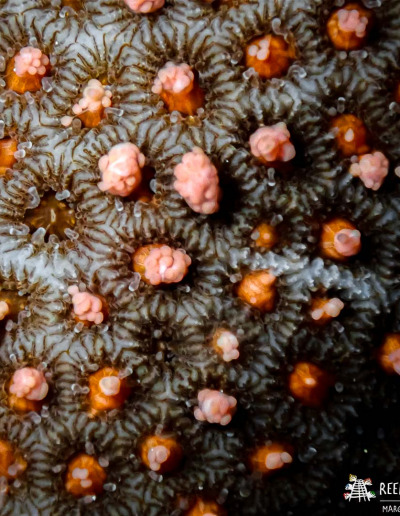 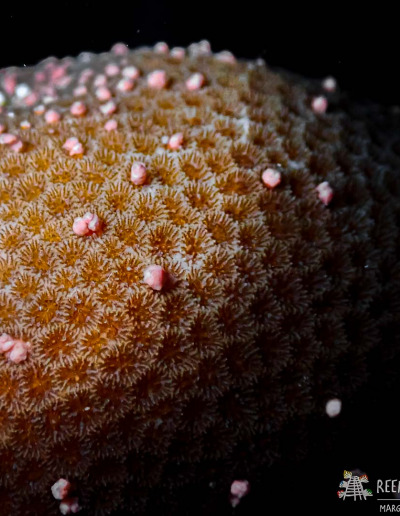 From our dive site spawning nets, the eggs collected from A. gemmifera did not fully fertilise. This is due to one colony producing a substantial number of eggs, whereas the second colony produced very few.

We will check for settlement and begin experiments on rearing juvenile coral polyps at varying temperatures, to determine if we can produce offspring with a higher thermo-tolerance (to increase resilience to elevated ocean temperatures). 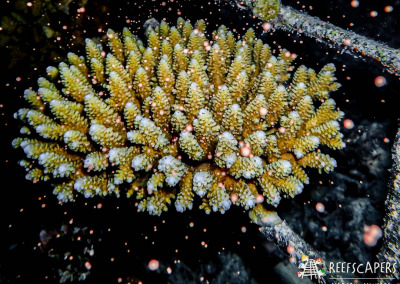 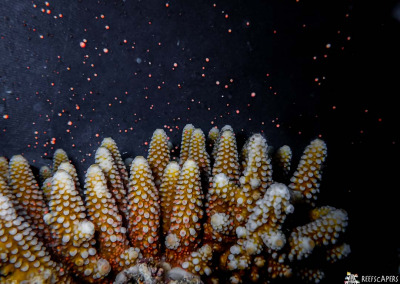 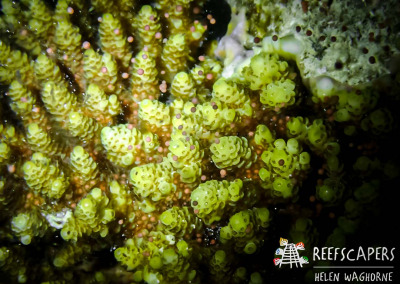 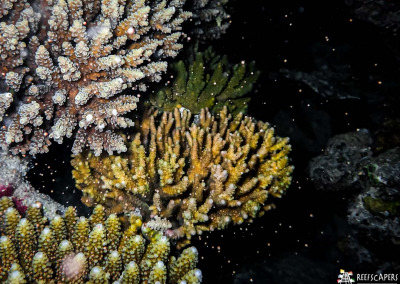 As we fragment mature colonies to check for the presence of gametes, we also utilise these as part of the coral restoration program to create sponsored frames and thus minimise damage. To track competency of sexual reproduction and survival post-fragmentation, we collected Acropora fragments (A. gemmifera, A. millepora, A. humilis – photos below) of varying sizes (2.2cm to 8.8cm) from fecund mature colonies, and placed them in our outdoor open-flow tank system. Interestingly, we observed that each fragment bundled and spawned a day later compared to their adult donor counterpart. A more robust study to determine fragment size and spawning would need to be carried out to confirm these observations at different developmental stages.

‘Oocytes in the early vitellogenic stage at the time of fragmentation were resorbed, whereas those in the late stage continued developing. Smaller fragments showed a lower survival rate and histological observations of their gonads revealed resorption of oocytes, suggesting that there was a trade-off of energy between reproduction and survival.’
Okubo, N., Motokawa, T., & Omori, M. (2007). When fragmented coral spawn? Effect of size and timing on survivorship and fecundity of fragmentation in Acropora formosa. Marine Biology, 151(1). 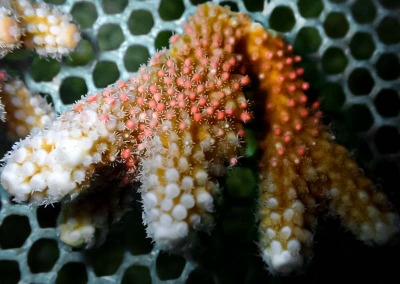 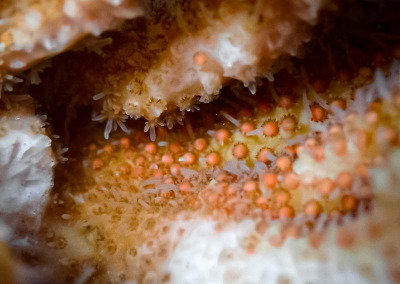 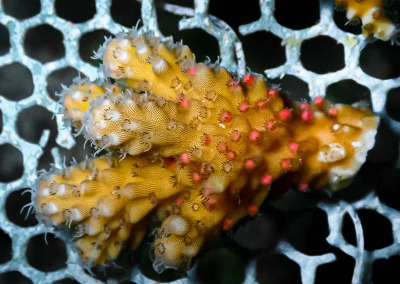 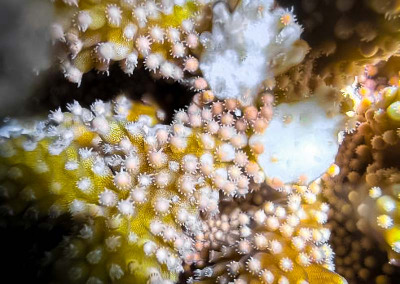