Reef-building corals can reproduce both asexually (via fragmentation) and sexually (via ‘brooding’ or ‘broadcast’). Hermaphroditic broadcast coral species (such as the Acroporidae) reproduce by releasing bundles of gametes (eggs and sperm). These bundles contain fatty lipids and are therefore buoyant, allowing them to travel to the surface of the water column where fertilisation takes place.

This spawning cycle is one of nature’s most spectacular events and only occurs once or twice each year, on cues from water temperature, wind speed and the lunar cycle. A rapid increase in water temperature has been shown as a predictor in coral spawning as it helps mature gametes. Wind speed, notably low wind speed, has also been shown as an indicator to optimise fertilisation.

Coral species are sessile organisms that must synchronise their gamete release to increase chances of fertilisation (gametes only survive for a few hours). Mature colonies develop gametes within their tissues over several months in a process known as gametogenesis, a timely process that utilises a substantial amount of energy and is likely why they only spawn once a year.

This phenomenon has been well-documented around the world (Australia, the Caribbean), however, there is little documentation from the Maldives about species-specific spawning and time of year. It is imperative that we begin to understand synchrony and timing of spawning here in the Maldives, with important implications for the management of coral reef ecosystems and identifying the health of reefs.

You may also be interested in our short reports and photos from previous years, Coral Spawning 2013-2020 and our November 2021 updates.

An initial sign that a coral colony will spawn is the presence of gametes within the coral tissue. It is possible to visually see ‘white’ eggs, a sign that the colony is sexually mature. Medium eggs with no colouration can take between 8 to 12 weeks to mature. Large, pigmented eggs (typically pink/orange) will likely spawn around the next full moon. 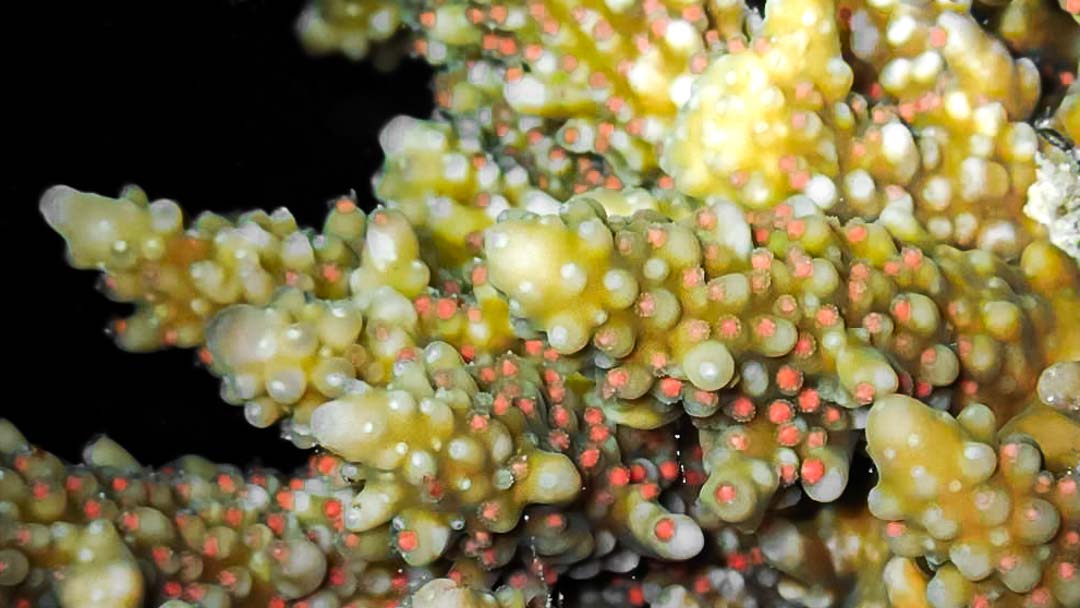 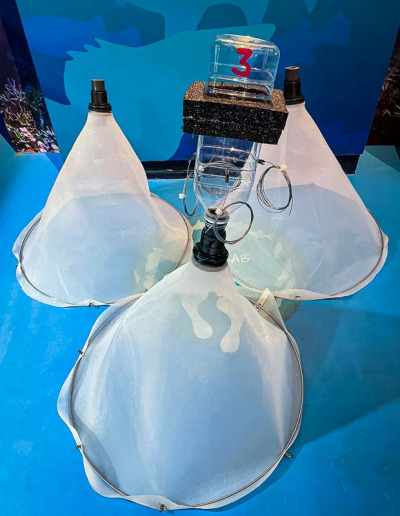 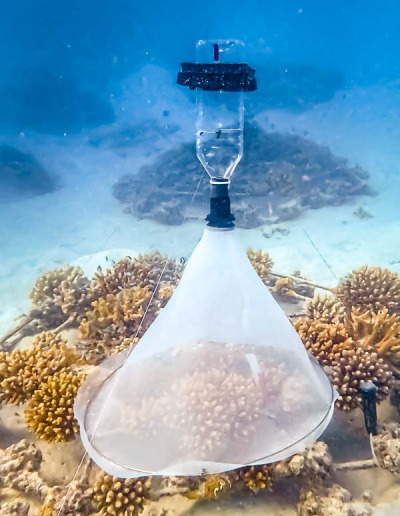 Coral spawn collection devices in situ, over colonies on our frame

Collection device in situ, over colonies on our frame 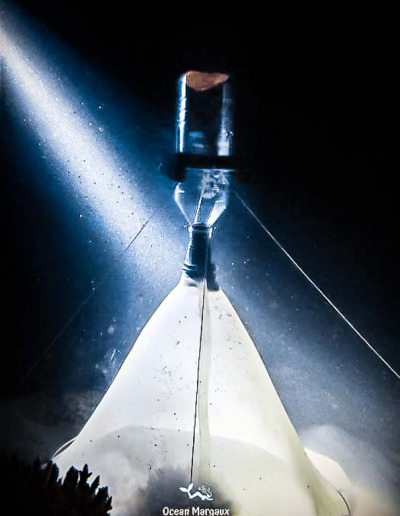 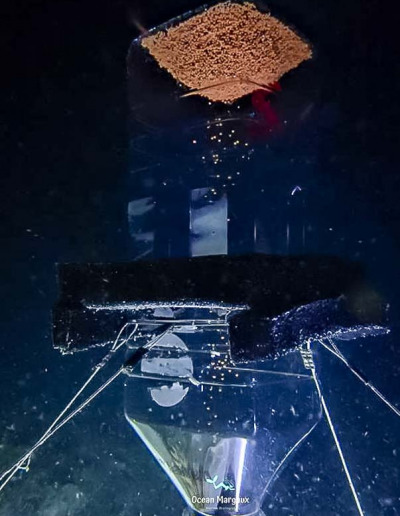 We used tidal charts to predict the ‘Neap Tide’, which is typically five days after the Full Moon, and specifically defined as:
“the time at which the line from the Earth to the Moon is at right angles to the line from the Earth to the Sun. Thus, the tide-producing effects of the Sun and the Moon cancel each other out, causing tidal ranges that are usually 10-30% less than the mean tidal range.” 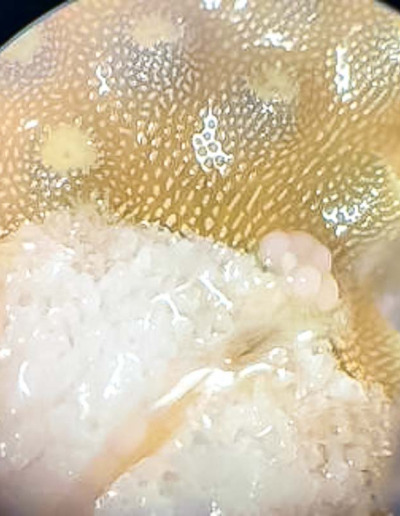 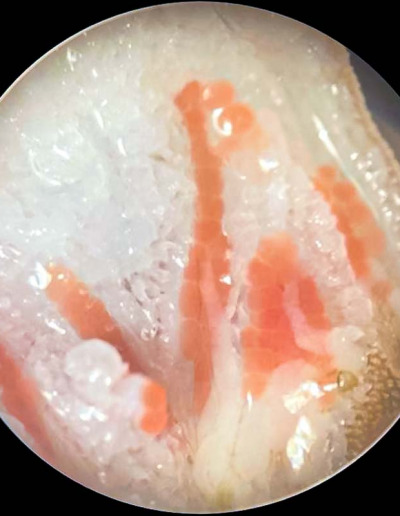 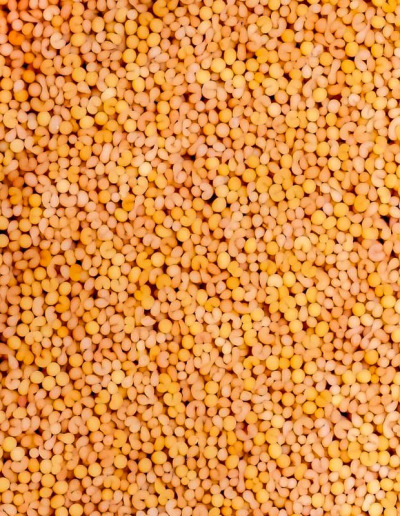 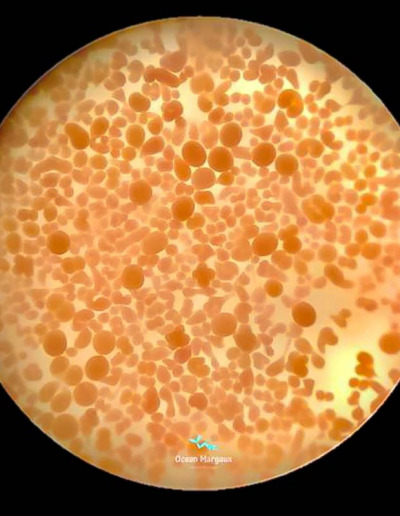 Once gametes had been placed into ex-situ fertilisation tanks, they were topped up with fresh seawater to ensure oxygenation. Seawater salinity was also monitored using a refractometer, to ensure the water quality matched that of the ambient ocean (34 ppt).
At 21:52, mixing began to break up gamete bundles. Fertilisation can begin a few minutes after disturbance, and continue for up to two hours post-mixing. The post-fertilised mixture was stirred gently for 30 minutes to prevent oxygen depletion, before gently rinsing off the sperm. Water quality is extremely important.
The mixture was examined for signs of embryogenesis (Craggs et al. 2019) and not disturbed for three hours. At 23:40, we observed cell division and then four-blastomere division. The mixture was rinsed again to ensure sperm removal, and separated into two different tanks at 01.40, where water quality was regulated. Our team were fascinated by the process, and continued to observe multiple coral cell divisions for several hours, well into the night. 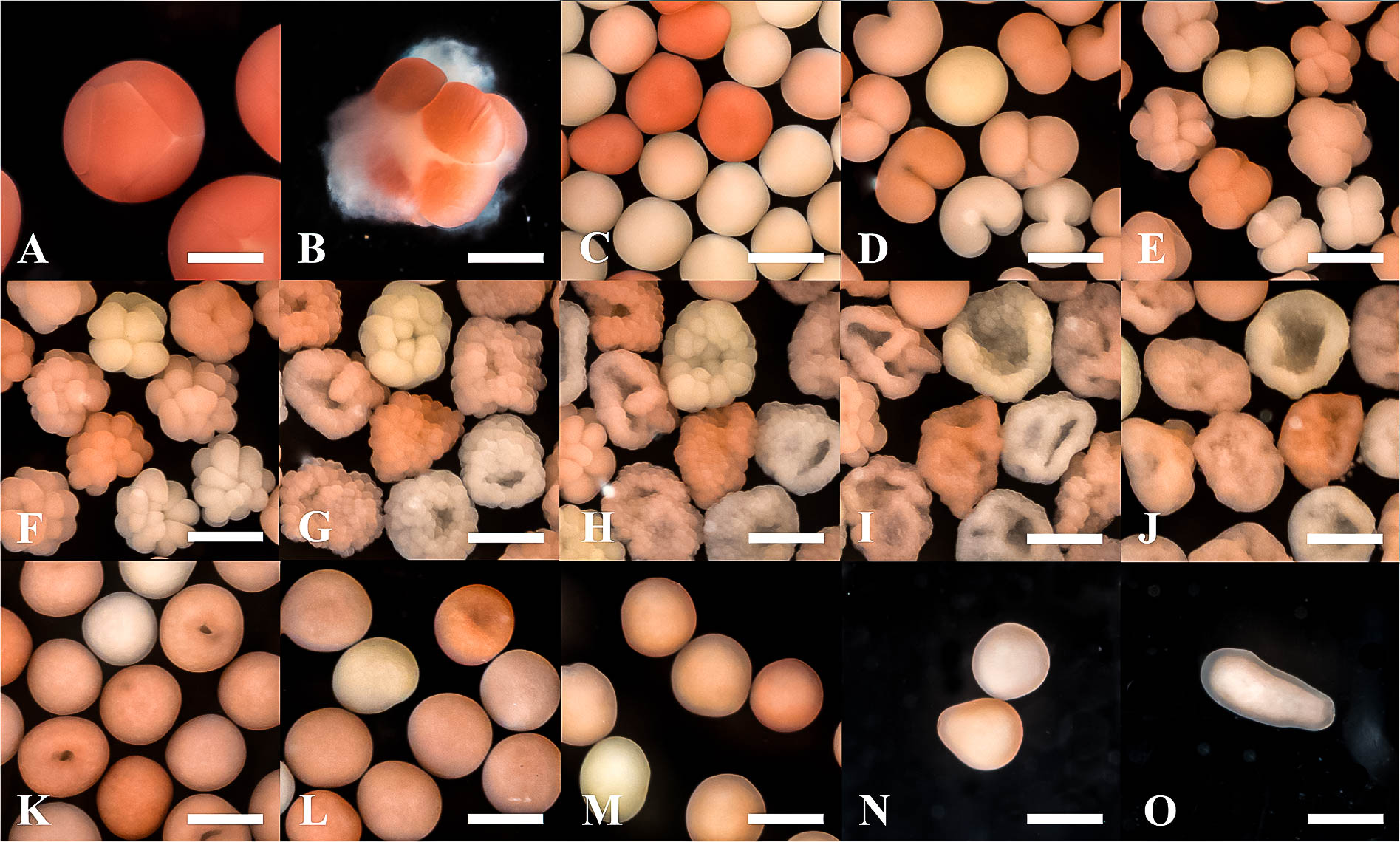 Colony sizes were measured (height, length and width) using callipers to determine ecological volume of mature colonies that spawned. Next year, it will be interesting to note percentage growth rates of colonies and look at coral egg density to identify redundancies in size and maturity.

In order to further study coral genetics and thermo-tolerance, a sub-sample of Acropora secale eggs were taken on 26 October (post-spawning). Genetic and taxonomic methods will help to identify species-specific genes of the samples that we cross-fertilised, especially if we observe settlement success in the future. 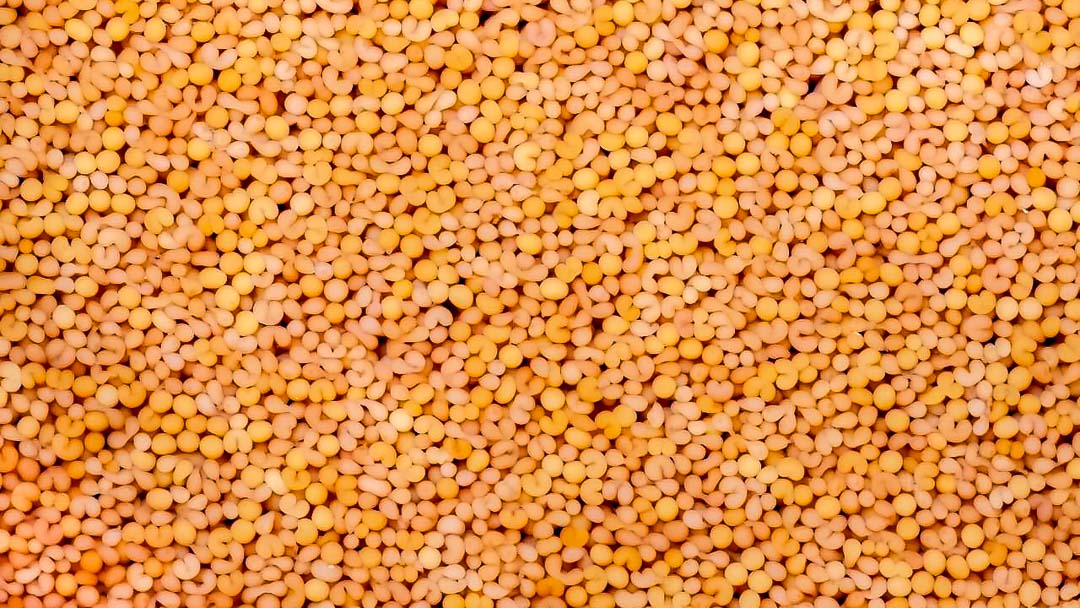 Thanks to our coral experts for their comprehensive report and excellent photos.
📷 @glorifiedfisherman / 📷 @oceanmargaux

Over the course of the last two months, our Reefscapers teams have observed nine separate coral spawning events, in seven different species, at various locations across the Maldives. At Landaa Giraavaru, we successfully collected and fertilised the released gametes in our laboratory, and we are very happy to say that, on 30 October, we achieved settlement of the resulting larvae!

Photos (below) showing tiny coral polyps, successfully settled on substrate in our laboratory. 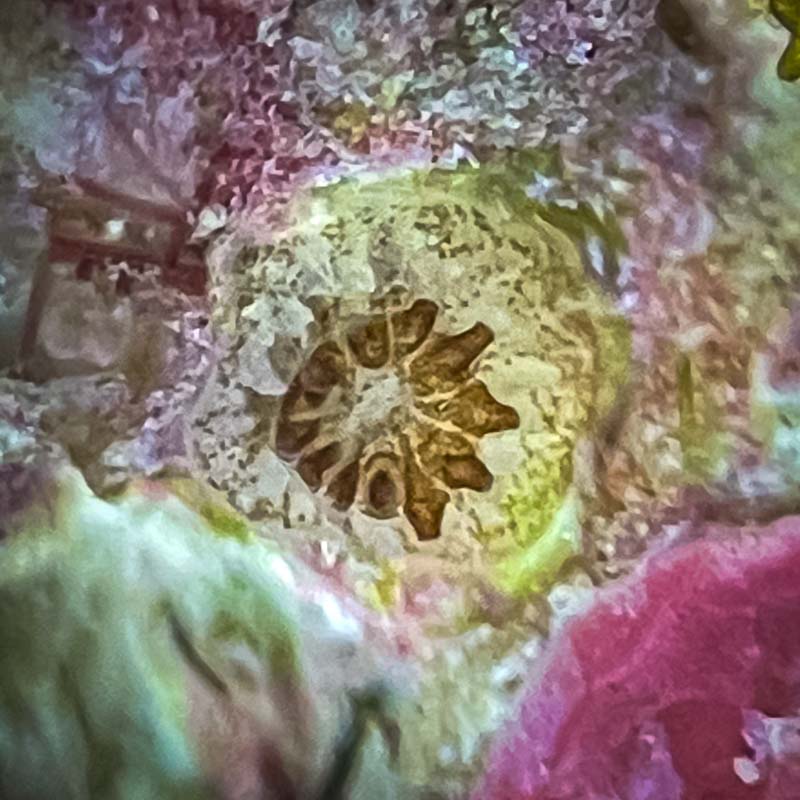 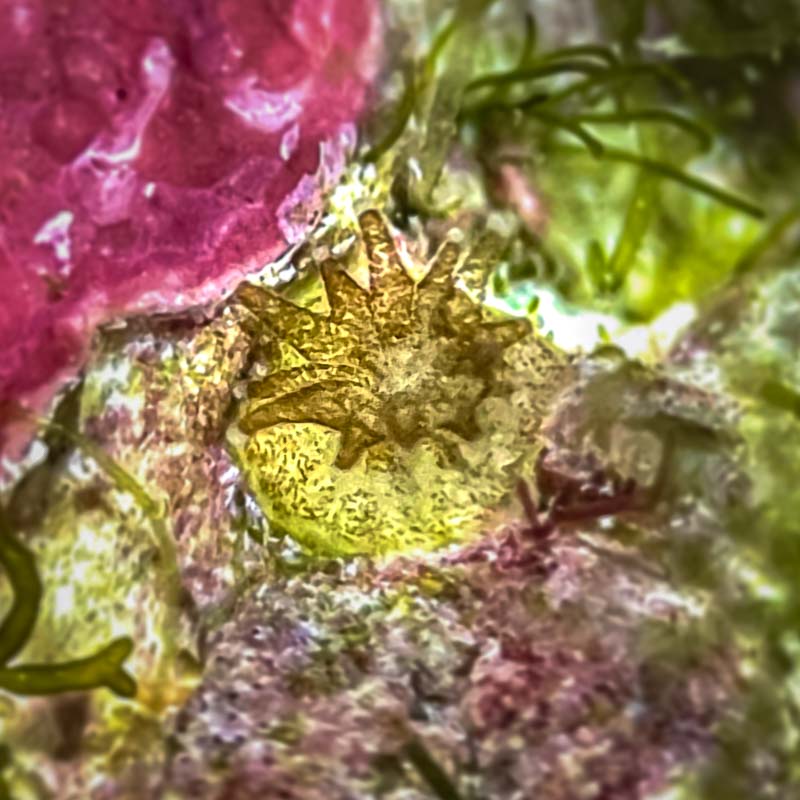 This is the first time that settlement in a species of Acropora has been recorded in the Maldives!

Alongside this ground-breaking advancement, we have also documented the stages of embryogenesis, and perfected the ex-situ fertilisation technique!

More updates in our November report! Keep an eye on our social media (links at bottom of page) to follow the growth of our new corals, and see settlements from a multitude of species via subsequent spawning events. 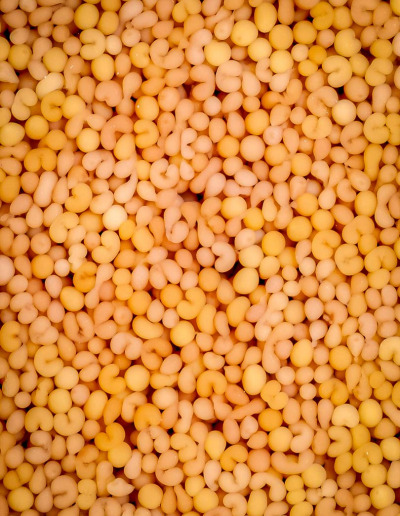 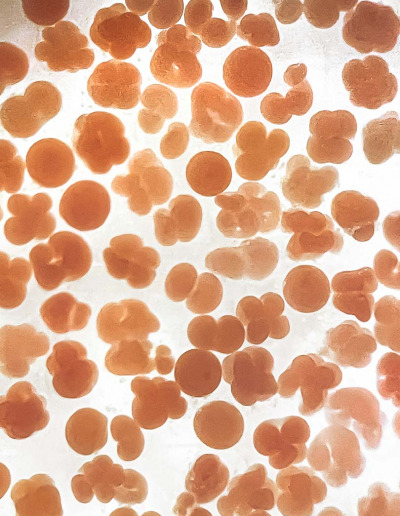 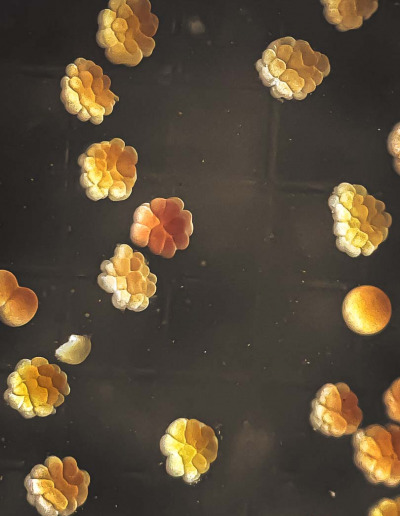 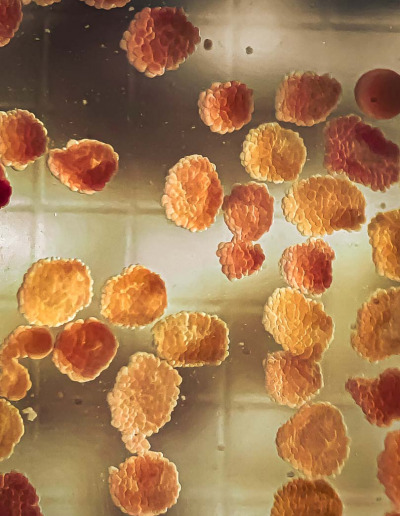 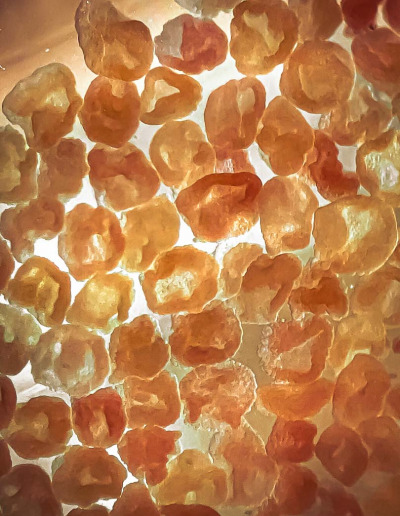 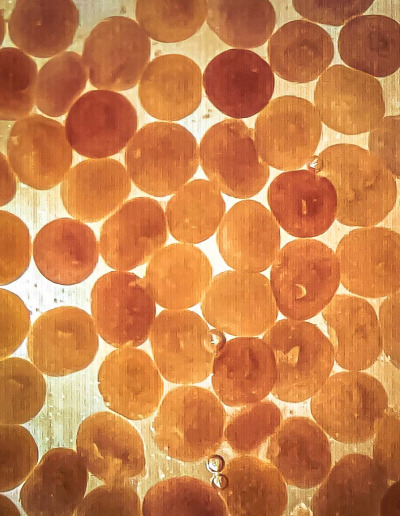