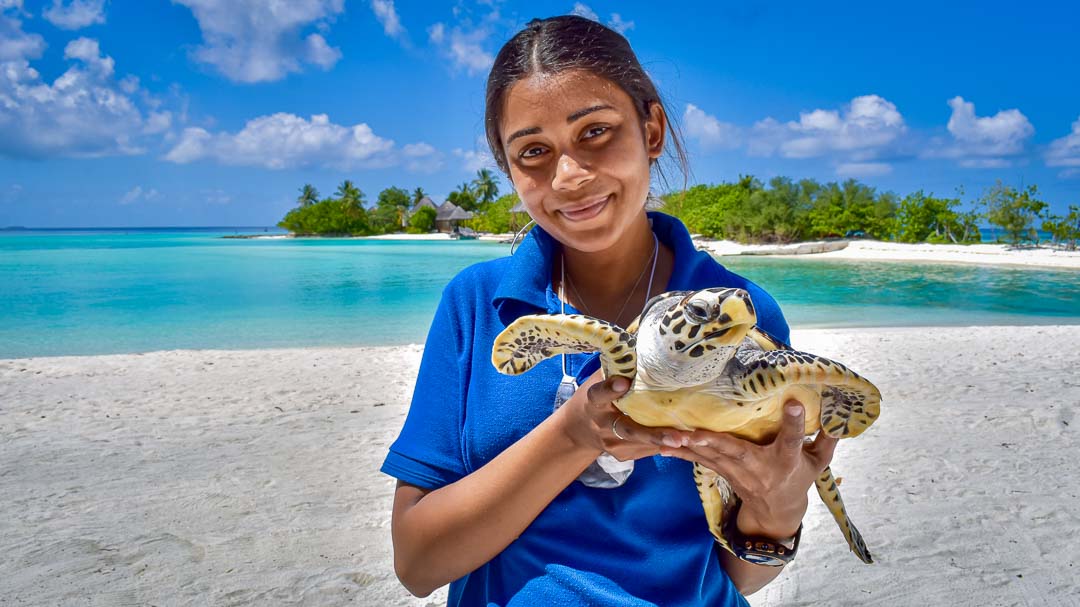 Toby posing for the cameras on his release day

If anything can be said of the pleasures of working at Marine Savers as an intern (my experiences), they will never beat the satisfaction of being a full-time employee! There were a few hurdles, though; the main one being a lengthy quarantine (thanks, Covid!) But after a couple of weeks and an obligatory nose-swab test, I finally began my new role as the Assistant Marine biologist at Kuda Huraa.

Let it be known, the first 90 days have been nothing short of jam-packed with excitement, learning, and a ton of responsibility… keep reading to find out all the highlights! 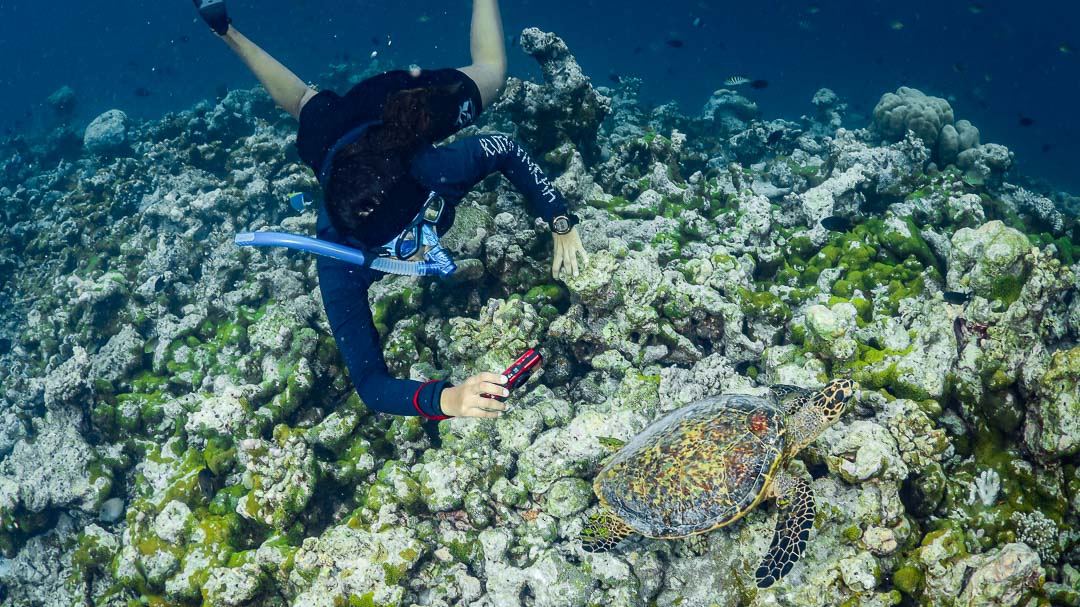 On my first day, it was as if I’d never left. I knew it wouldn’t be the Marine Discovery Centre if it wasn’t packed with action from the get-go. Our Rehabilitation Centre was teeming with turtle patients; left, right, and centre. Even during a pandemic, when there aren’t as many guests checking-in, the turtles are still checking-in all the time, and we had a total of 27 turtles! Let me introduce you to our in-house turtle patients: 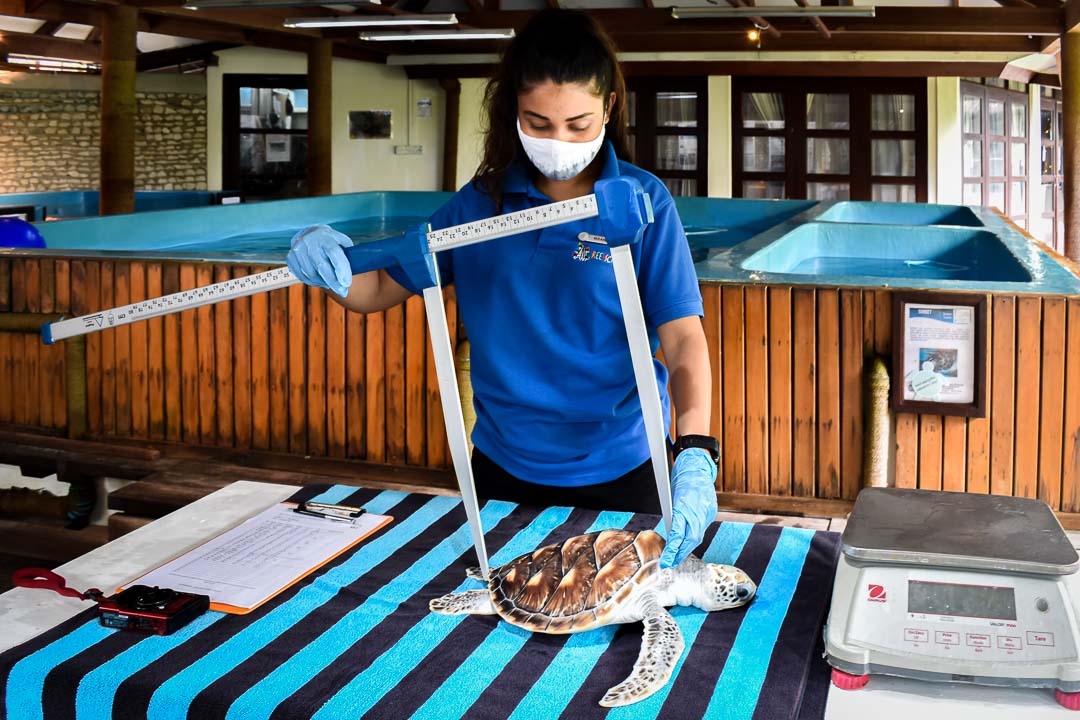 Turtle Tuesdays – we record the biostats for all our turtles, and give them a full health assessment

First up, we have Bowser – better known as ‘feisty girl’. She has shown great improvement since my time here in 2019. She has gone from being on a steady diet of live crabs once every few weeks and floating around her pool, to now doing a minimum of 50 laps around her pool every morning. At mealtimes now, Bowser will eagerly chomp off an extra bite (or two) of whatever we feed her! We’re very encouraged by her development, and are hopeful that she’ll soon start diving and be released back into her natural habitat.

Next, we have Loretta, a female Olive Ridley turtle who is only a little smaller than Bowser. She arrived at our Centre in early January, after being found caught in a fishing net. Time and time again, we keep finding and receiving reports of turtles entangled in ghost fishing nets. It is disheartening to know that the risk of marine life becoming helplessly twisted in man-made debris is ever-present, and unlikely to ever disappear. Luckily, Loretta was found with only minor injuries to her shell. She did, however, present with a missing front flipper – an amputation that may have resulted from a prior entanglement.

If you have been keeping updated with our turtle news, our favourite turtle Quasi will be no stranger to you. Still as special as he’s always been, Quasi has continued to steal the hearts of everyone who visits our Centre. He has grown since I last saw him, although the deformation on his shell has slowed his physical development. Nevertheless, his level of activity and appetite is promising. 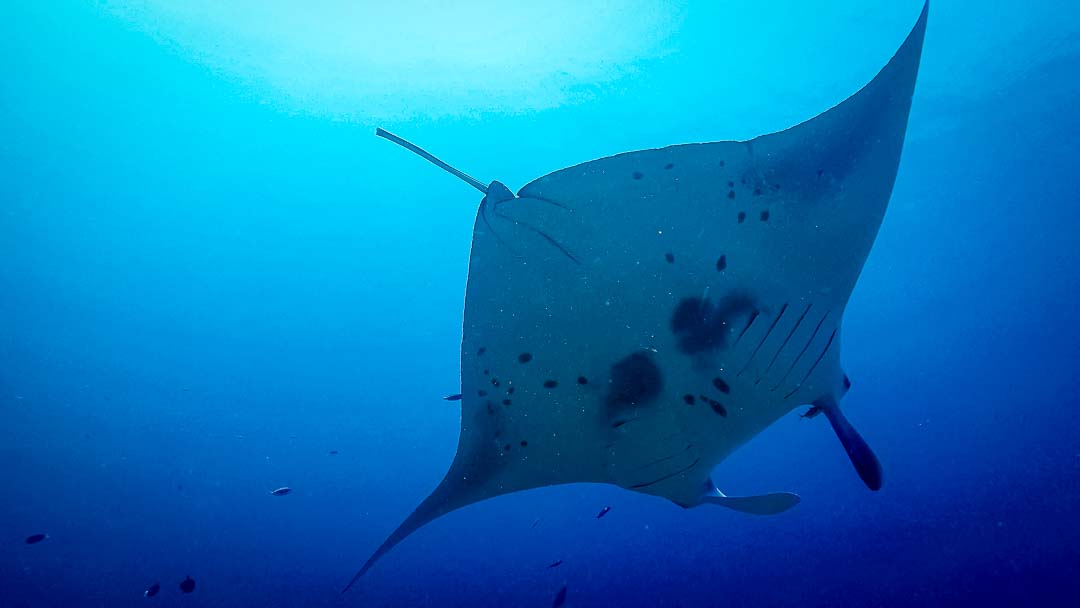 When I first started work, we had an arrival of 22 new hatchlings: 14 hawksbills and 8 green sea turtles. I would be lying if I said I don’t get attached easily – especially to our turtles. That’s why, on the morning that I found Jaga and Wally, 2 of our Hawksbill hatchlings, unresponsive in their pools, I felt truly upset.  As someone who spent weeks giving them medical care for their infections and feeding them daily, it was definitely hard to not be emotionally moved by their loss. It’s at moments like this I’m reminded that nature is a giver, but also a taker. The circle of life can be prolonged, but it can’t be stopped… even by trying everything possible to give injured turtles a fighting chance at survival.

Sunset and Toby, both of whom I was quite familiar with from before, were released during my first 3 months. It was sincerely gratifying to witness them being returned to the deep blue!

Now that you have met our turtle patients, let’s do a quick recap of my first 3 months as a full-time employee at the Marine Discovery Centre. I started my employment at the busiest time of the year – festive season. During this time, I wasn’t only entertaining our special turtle patients, but also entertaining guests at the Resort with fun and educational activities. (I will let the photos speak for themselves). 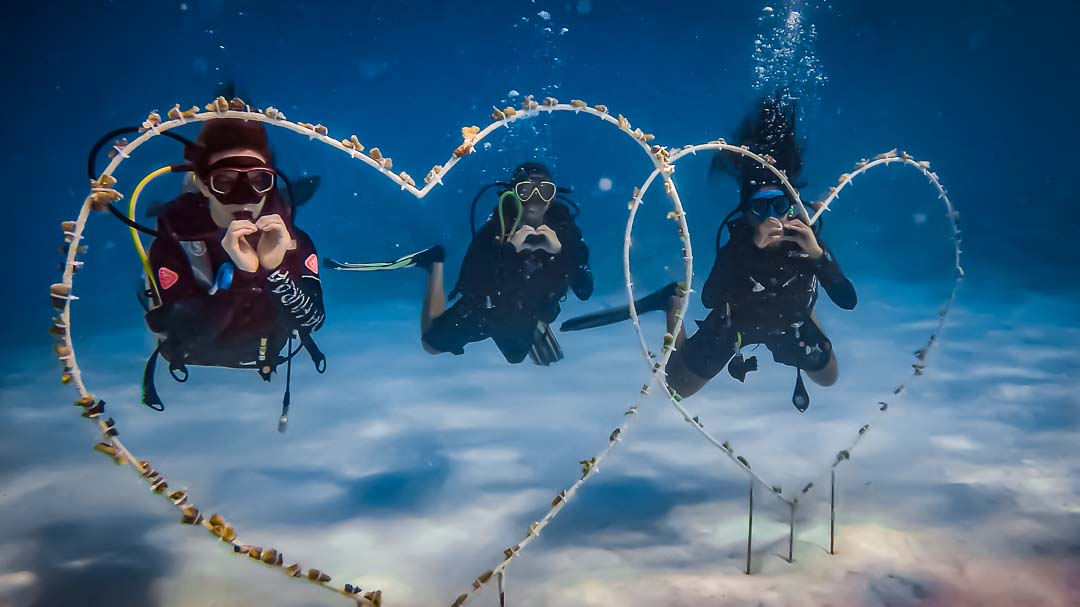 The fun activities continue ! Valentines day dive with my ‘crew’

It’s true what they say: time flies when you’re having fun (and working!) I have gone on numerous excursions with guests, seen a myriad of marine life and fed a lot of hungry turtles.  It’s been an eventful and exciting first few months here in paradise, but it’s time to sign off now – can’t keep the hungry turtles waiting! 😊 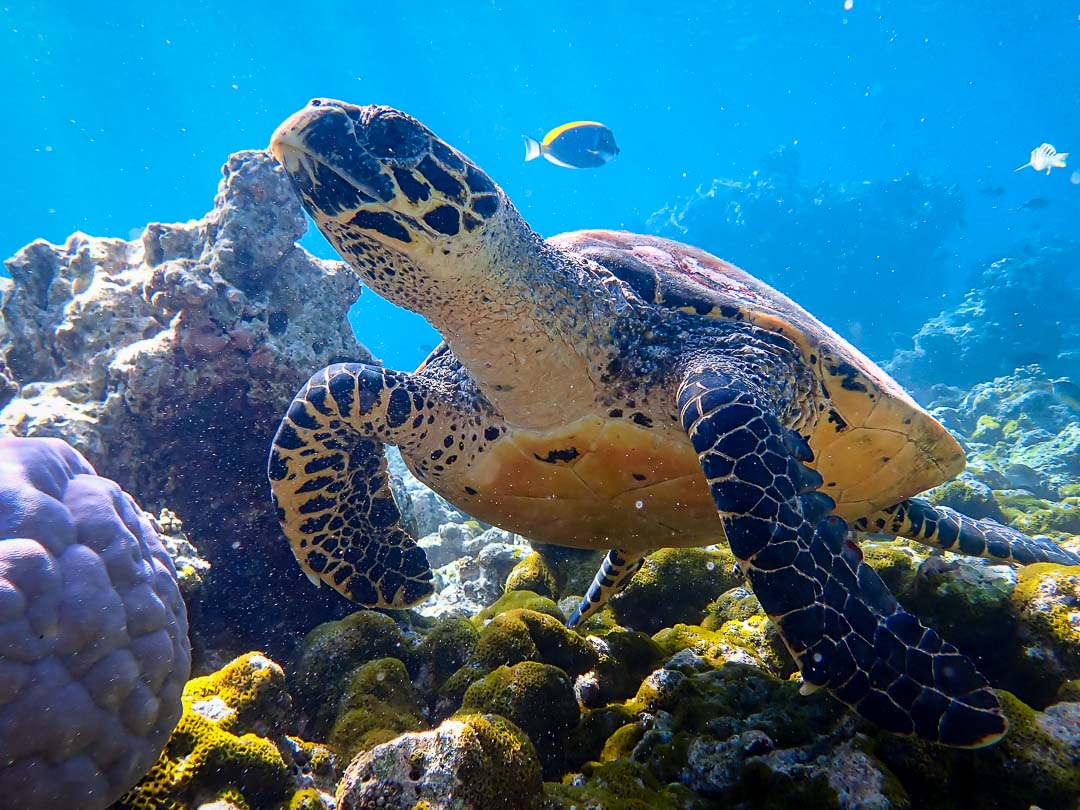 Turtle safari – a wild Hawksbill grazing on the reef