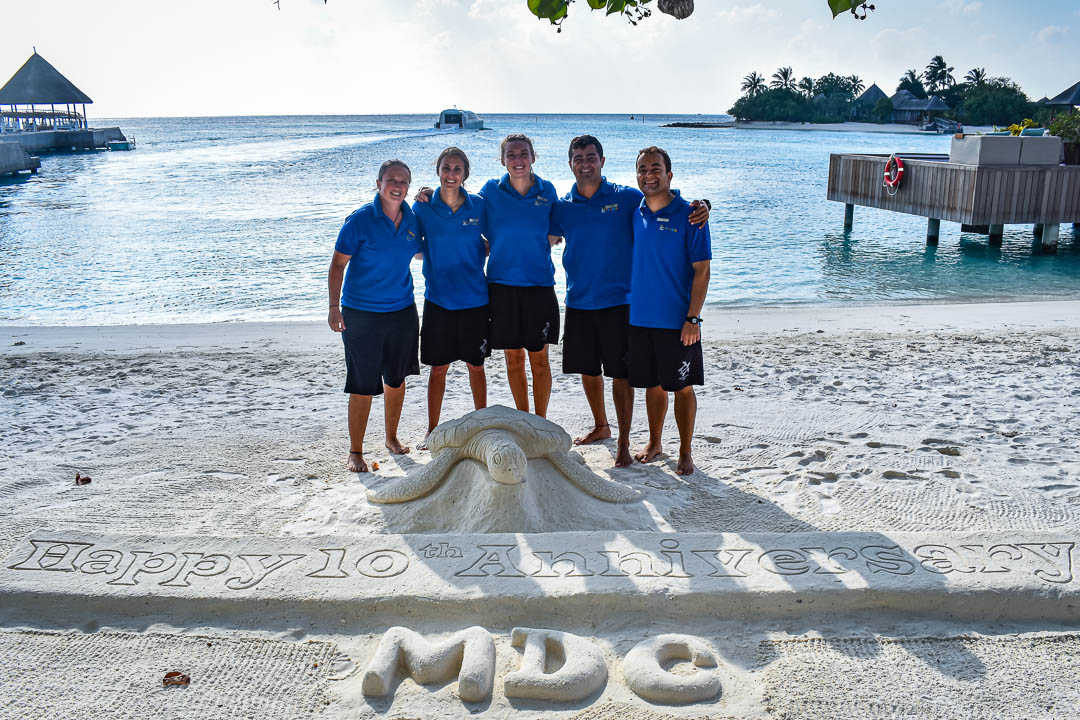 We have reached a very special milestone at Marine Savers: 2020 marks the 10-year anniversary of our turtle rehabilitation work!

Way back in March 2010, an Olive Ridley turtle we named ‘Oceane’ initiated the turtle rehabilitation programme at Landaa Giraavaru. Missing a front flipper from an old injury and suffering from buoyancy problems, Oceane was found floating in open water by Landaa’s dive team and brought back to the resort for medical attention.

Several months later, another Olive Ridley turtle (‘Olivia’) suffering from head injuries was brought to our Rehabilitation Centre. Generous guest donations enabled the construction of a new large pool, allowing us to care for multiple patients at the same time in the country’s first dedicated turtle rescue centre.

In the 10 years that our Centres have been open, we have admitted 272 sea turtles, resulting in 155 successful releases. Our increased expertise in rescuing and rehabilitating stranded and injured sea turtles is making a modest but important difference to the regional decline in turtle populations. 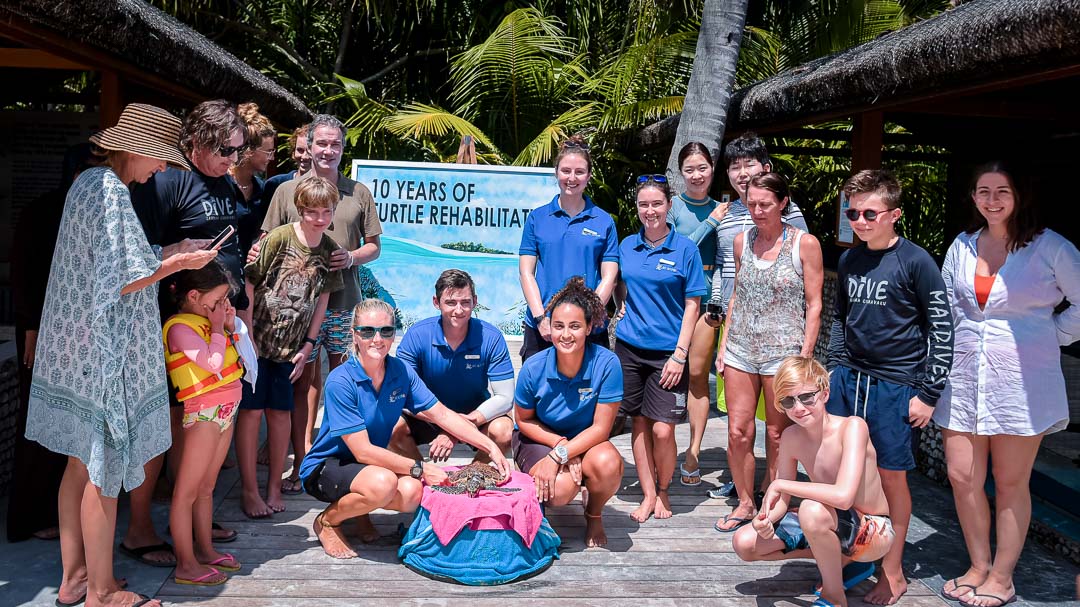 To commemorate our 10-year anniversary, we successfully released 2 of our recent turtle rescue patients. Lenny (female Olive Ridley) and Conna (juvenile Hawksbill), were found entangled and floating on the ocean surface by our Four Seasons colleagues at Voavah Private Island. Luckily, both turtles only had small wounds that healed quickly, so they quickly regained their strength at our Centre and were keen to return to the open ocean.

We also had the pleasure of hosting an art exhibit by Hazma, the top scoring student of Manta Trust’s Ocean School program 2019. During the program, students were taught about marine biology using theory classes, creative activities and snorkelling field trips, and Hazma felt inspired by the programme to create this series of paintings focusing on threats to the Ocean in the Maldives. She joined us for the turtle releases and revisited her passion for snorkelling! 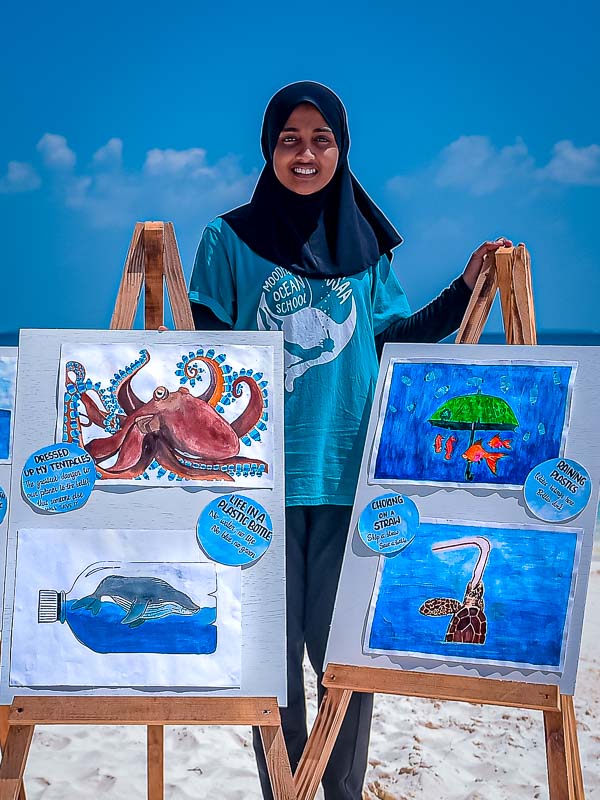 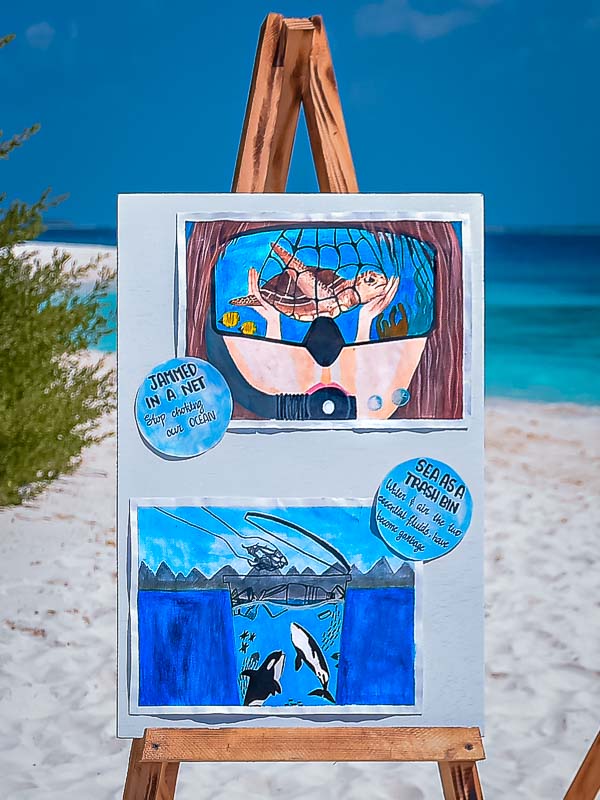 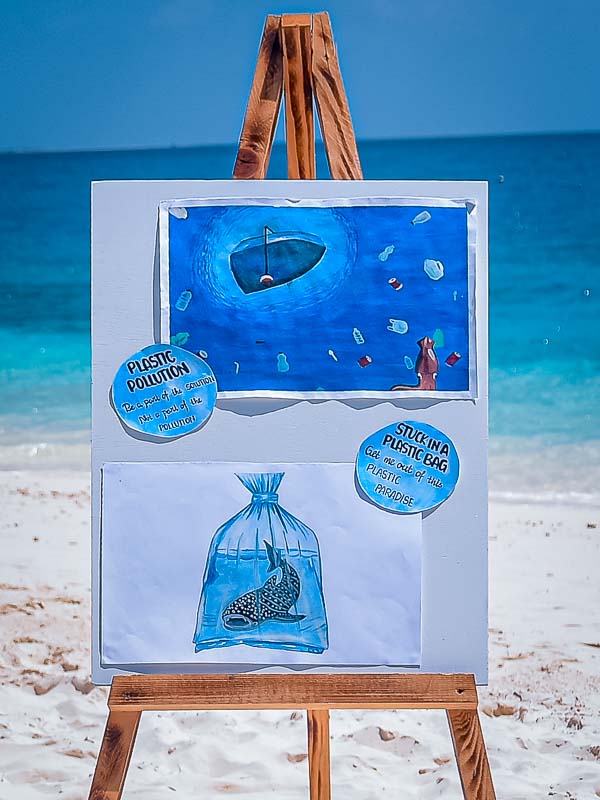 We would like to thank the great number of colleagues who have helped us with a decade of turtle rescues – all the resort guests, staff, boat captains, sea turtle veterinarians, seaplane pilots, neighbouring resorts and businesses that have assisted in the rescue, transport and rehabilitation of our turtle patients over the last 10 years… we are truly grateful!

Sea turtles remain under threat in the world’s oceans and are officially listed as vulnerable/endangered by IUCN (the International Union for Conservation of Nature). Five of the seven species of sea turtles can be found in the Maldives, with the two most common being the ‘critically endangered’ Hawksbill turtle and the ‘vulnerable’ Green Turtle, both often sighted living on and around the reefs. The ‘vulnerable’ Olive Ridley turtles are sadly found in Maldivian waters after becoming trapped in drifting ghost fishing nets. The two species very occasionally spotted are the ‘vulnerable’ Loggerhead, and the Leatherback which is ‘critically endangered’ in the region. 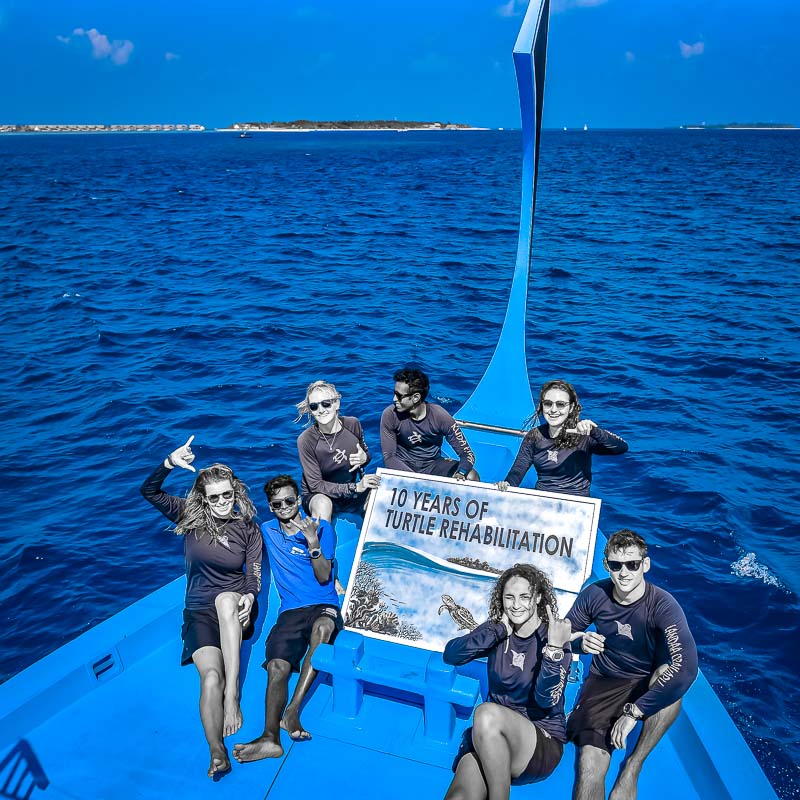 Looking back … some photos from our archive. 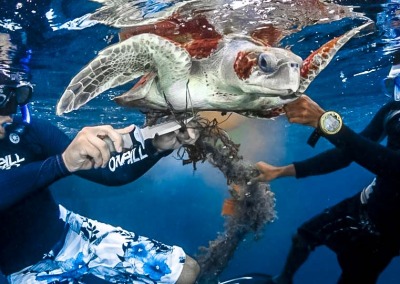 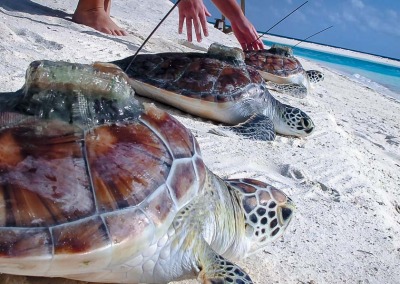 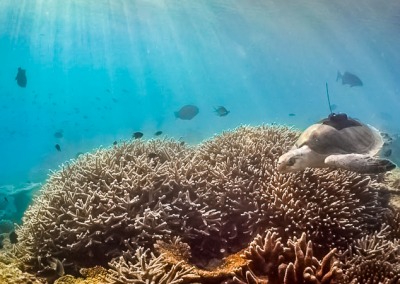 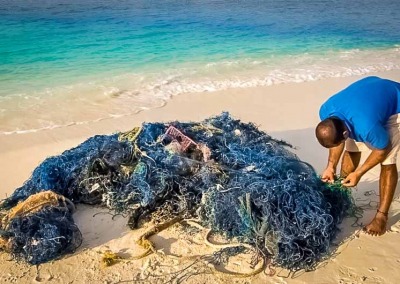 Ossy was entangled in this giant ghost net

Ossy was entangled in this giant ghost net (2013) 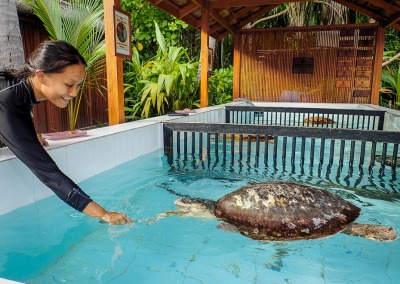 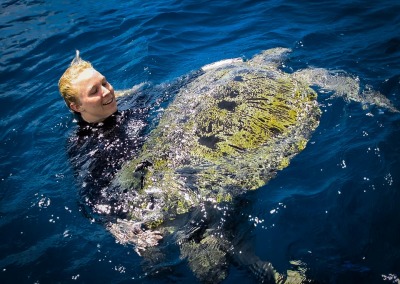 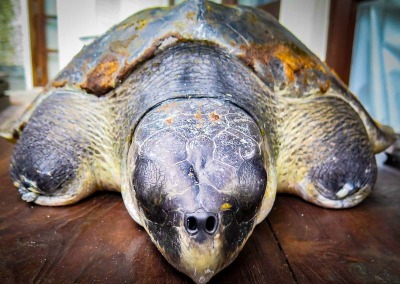 Rex at our Centre, missing both front flippers (2015) 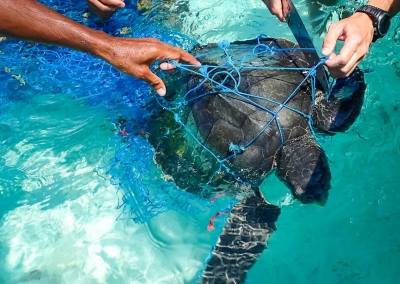 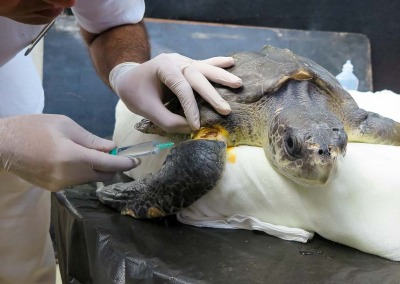 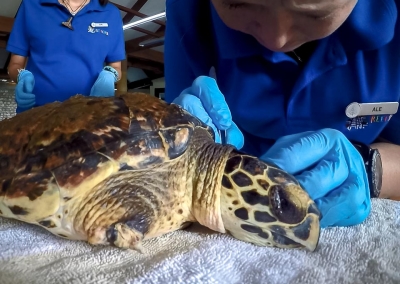 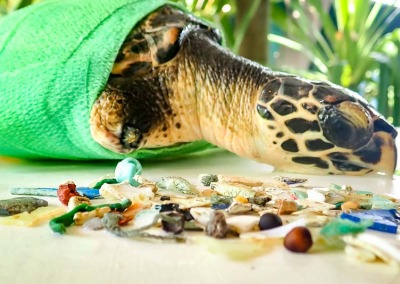 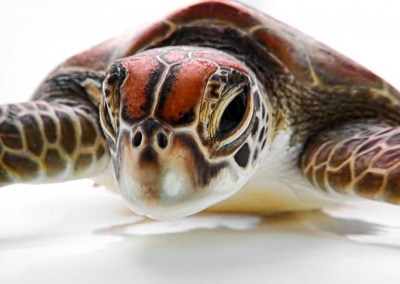 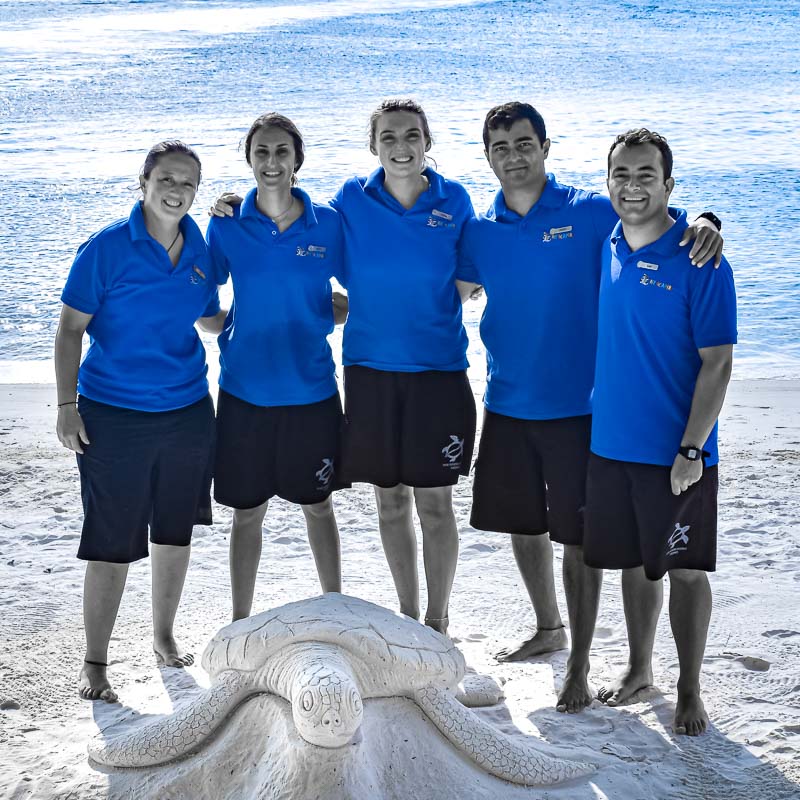 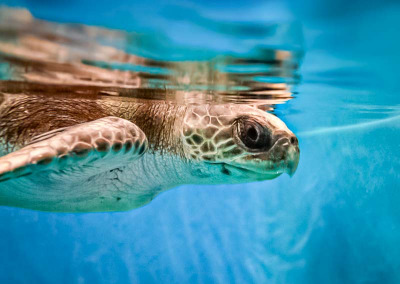