Updates From Our Marine Discovery Centres

During January, it was time for a periodic refurbishment and deep-clean of our plankton production room down in the Fish Lab. Good standards of cleanliness are very important in fish-breeding systems, with bacterial contamination being the main enemy of healthy fish larvae. Pathogens can easily develop and flourish within the same apparatus used for fish food production, so we schedule regular microscopic observations of our microalgae, rotifers and artemia cultures, to ensure they are free from contamination before introducing them as food into our fish tanks.

This year, our plankton production room renovations have included:

Koan, our new aquarist, will now have a refreshed workplace to start fish breeding, and following some intensive hands-on training sessions with our fish specialists Aku and Carla, we have high hopes for a fish-filled future! 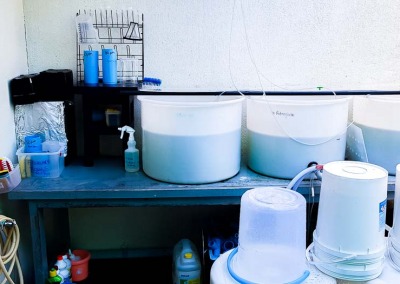 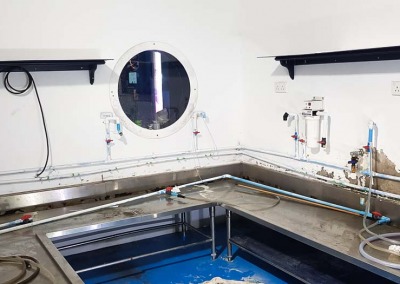 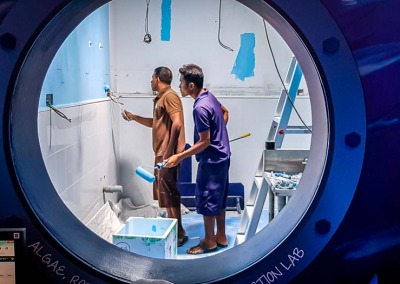 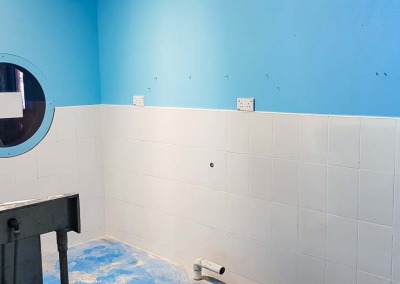 At the beginning of the month, we had a number of new fish additions, including 2 six-spot gobys (Valenciennea sexguttata) and 10 blue- green chromis (Chromis viridis). Of the 3 Maldivian anemonefish, a breeding pair seems to have established, with the original anemonefish transitioning to female and coupling up with a new individual in the bubble-tip anemones.

At the start of January, the water circulation system developed a hole in the inflow, causing lots of air bubbles to build up in both aquaria. Whilst every attempt was made to disperse the bubbles, one of the sailfin tangs was adversely affected, resulting in inflamed eyes (thankfully it recovered fully after a few days). Towards the end of the month, there was a problem with the water pressure through the whole pool and aquarium system, stopping the flow to both aquaria for 24 hours. Bubble makers were added to both systems and were monitored for signs of oxygen depletion. Fortunately, we rectified the problem before oxygen concentrations became too low, and none of the fish seem to have been adversely affected.

The mini coral frame continues to have mixed success. The Acropora digitifera, A. tenuis and A. hyacinthus fragments continue to grow well, with many (17/25) now fully grown over the zip tie and encrusting securely onto the bar. A total of 4 coral fragments have died, with several others at the ‘partially-dead’ stage (we are unsure why).

Following the partial death of the large Favia coral due to sedimentation in mid-January, 3 new Favia colonies were added, with 2 new sea hares (Stylocheilus striatus) arriving as stowaways!

On our new mini coral frame, after an initial period of bleaching (1 coral fragment death), 4 of the A. tenuis and 5 of the A. digitifera fragments are healthily encrusting over the zip tie (similar timescales to those recorded on our frames in the lagoon, and considerably quicker than Aquarium 1). These mini coral frames not only provide an excellent opportunity to compare growth rates between aquaria, but also to observe these fine-scale timelines so we can better understand how our fragments are growing in situ. We therefore aim to monitor the frames on a more regular basis, along with the coral plates, so we can collect more detailed observations about their growth.

The Clark’s anemonefish (Amphiprion clarkia) breeding pair has had a busy month, laying eggs on three separate occasions. Eggs were harvested twice to observe under the microscope, and on both occasions the eggs continued to grow in vitro after collection. We observed development of the circulatory and cardiovascular systems, showing visible heartbeats and muscle contractions by day 5. Interestingly, one egg had a discrete tail protruding from the egg case, in what appears to have been partial failed hatching. Overall, this development timescale was similar to our observations of the Maldivian clownfish (A. nigripes) in October. 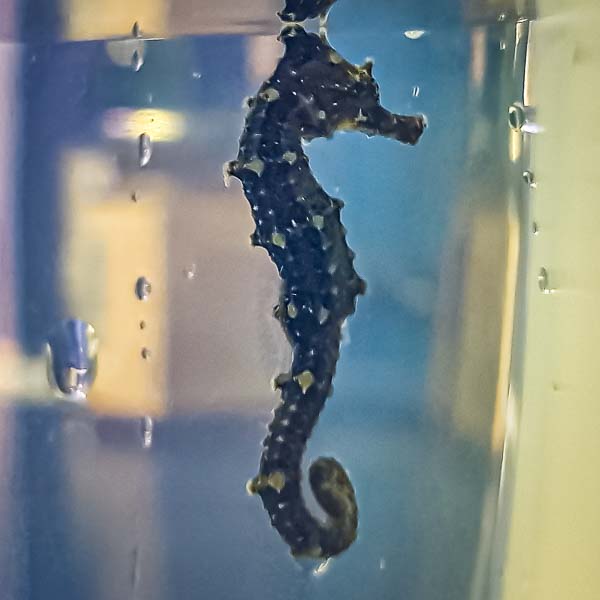 Sea horse in our Fish Lab 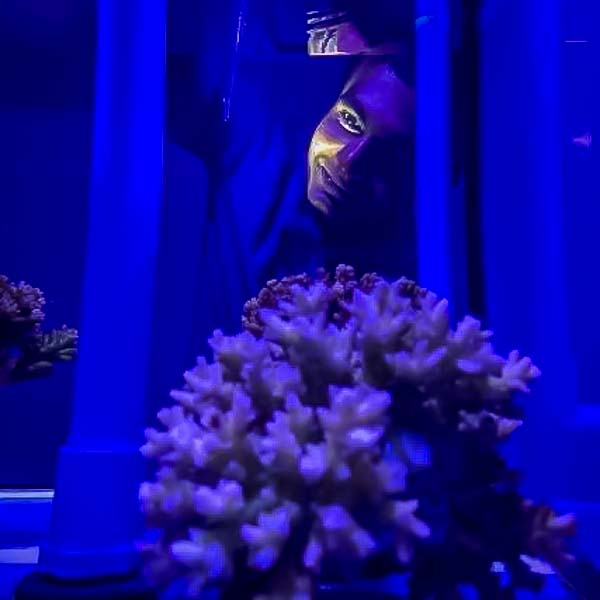 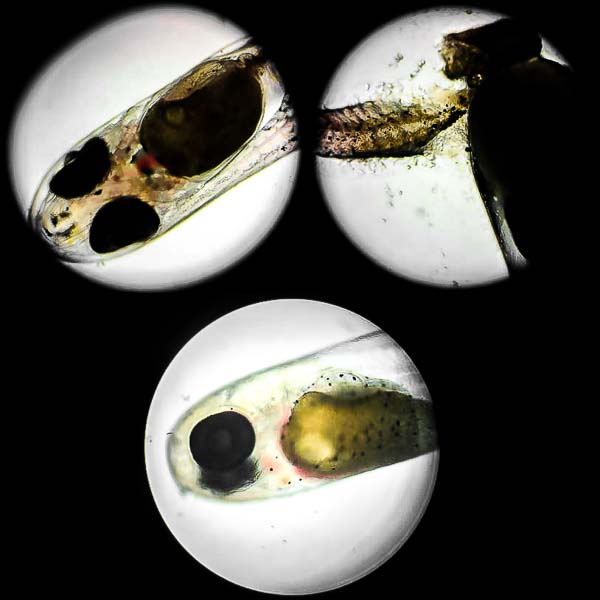 Yaniu Rauf, our current marine biology apprentice, has chosen to continue the coral sexual reproduction experiment for his personal scientific project. He is currently following the protocols developed by Irene, our previous intern who started work on this pioneering coral breeding program. (Read about his coral spawning experimentation in our Reefscapers Diary.)

SS1 (large specimen) – an average increase in arm length of 1mm for the month, which is encouraging since it appeared to have stunted growth last month.

SS4 (autotomized arm) – 0.6mm growth; continues to differentiate its new arms and enter the ‘comet-phase’. Additionally, the parent arm grew by 1mm, which reverses the trend of decreasing in size in favour of new arm growth that we have observed the past two months.

We recently attended the GCRMN workshop in Malé. Established in 1995, the main goal of the GCRMN is to gather long-term global reef monitoring data, covering hard corals and fish. The Maldives are part of the South Asia region (with Sri Lanka and India) and the workshop aimed to reinvigorate the regional network, develop inter-country communication and present findings. 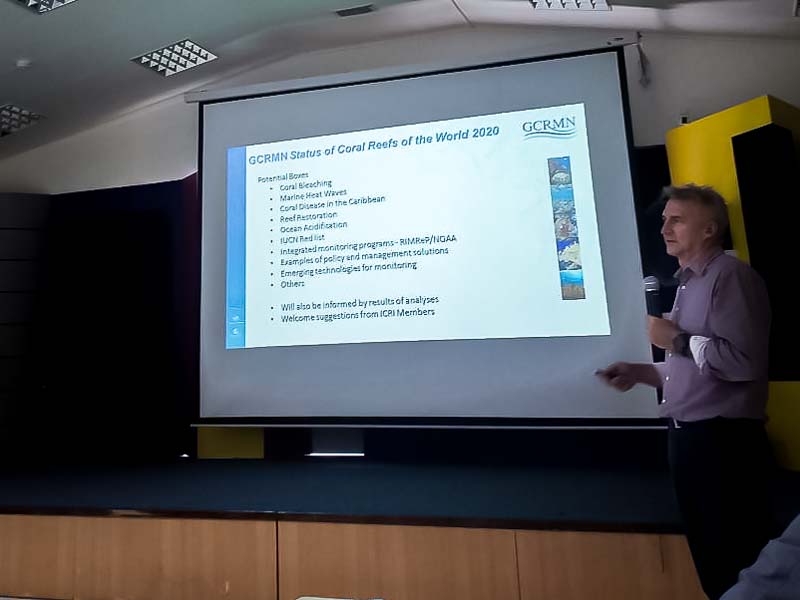 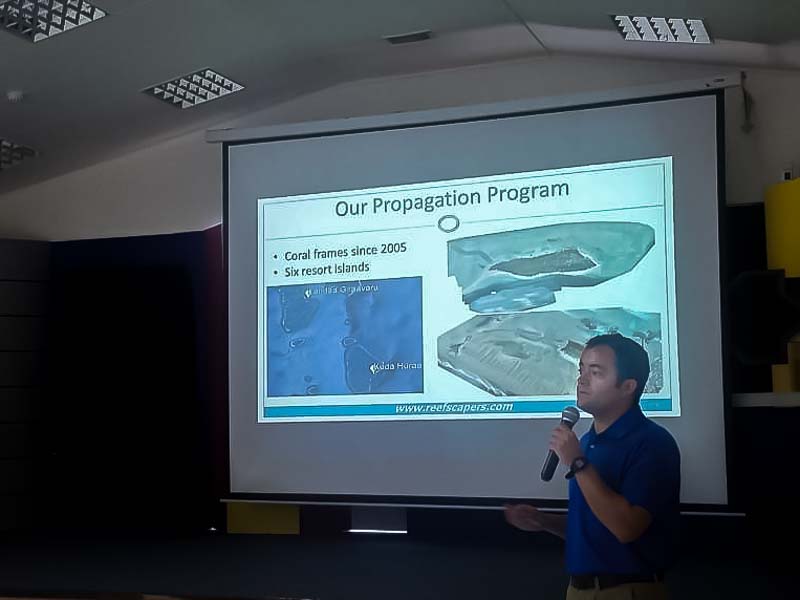 At Landaa Giraavaru during January, a total of 24 new coral frames were transplanted (sponsored equally by guests and Four Seasons) and a total of 191 frames were monitored (cleaned, repaired, photographed) at various locations around the island.

At Kuda Huraa, we transplanted 19 new coral frames around the island. Since September 2019, we have re-transplanted and monitored a total of 810 frames (averaging 5.5 frames per day).

With the warmer weather approaching, we will start relocating vulnerable frames under the shade of the boardwalks, so they are partially shaded during the day. We also plan to relocate some frames into a heart-shape, sited in deeper cooler waters, again to help mitigate against thermal stress.

A further 4 coral species were added to our Maldivian Corals Database, bringing the total to 26 species; extra photographs and more species will be added over time. Relevant data and photographs were collated and summarised for Acropora gemmifera, Acropora pulchra, Heliopora coerulea and Porites cylindrica. 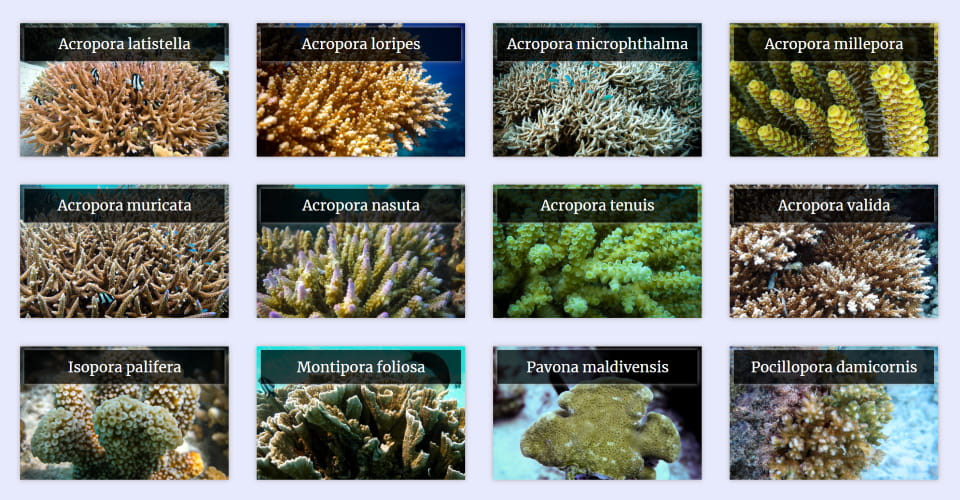 We have installed stronger replacement propellers for the Catamaran, and started to conduct sea trials, and we are making good progress with our new AI software model, which can accurately detect the position of coral frame subjects in 85% of monitoring pictures.

More info and videos over at Reefscapers, including our AI-4-Corals project and up-to-date Development Journal. 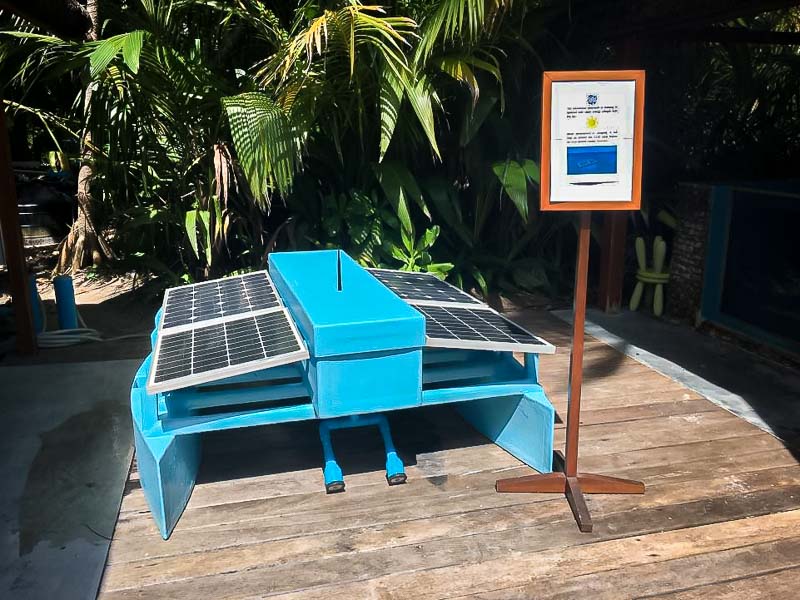 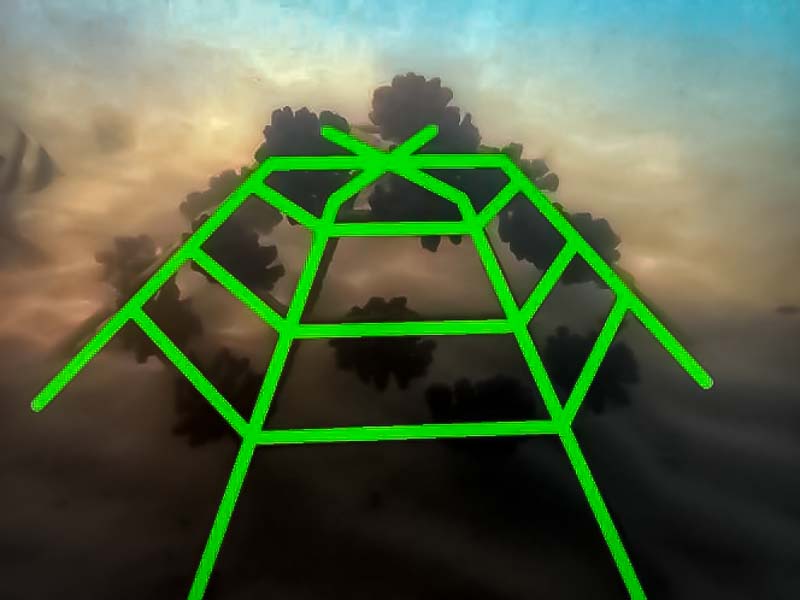 2020 marks the 10-year anniversary of our Rehabilitation Centre at Landaa Giraavaru! We plan to host an educational event for guests, with a turtle release to mark our achievements over the last decade.

At Landaa, we successfully released almost the same number of turtles during January 2020 alone, as we released in the whole of 2019.

Luchi, one of our recent rescue turtles, has received a kind donation from guest Mr Liang, who was present at Luchi’s rescue during Chinese New Year. We plan to fund a satellite tracker to attach to her shell upon release, and track her movements as she swims around the islands and atolls of the Maldives (and beyond).

A new website feature being developed will enable online visitors and resort guests to follow the health updates of some of our hatchlings and rescue turtles (pages functioning, but under development). From our online database, we can now display a chart for weight and length of the individual turtles, as well as regular photographs taken from our weekly health checks.

Each year, human activities expose our oceans to more and more pollutants, from plastic trash to harmful chemicals. Oil spills and leakage of petroleum from marine vessels are common examples of pollutants that can threaten the survival of marine organisms and their habitats, with long-term effects on delicate food chains and overall marine populations. Fortunately for us in the Maldives, oil spills are uncommon, however, there are occasional occurrences of fuel leakages.

On 22 January 2020, we admitted a juvenile Olive Ridley turtle, Tara, to our Rehabilitation Centre. Tara was the unfortunate victim of an oil spill. She was found floating near the island of Fuvahmulah, coated almost entirely in a layer of thick black tar. Our expert team of marine biologists immediately started emergency treatments, with meticulous scrubbing (using mayonnaise!) to remove the tar. She is now in a clean, stable condition and slowly regaining her strength… she was rescued in the nick of time!

If there is an oil slick present on the ocean surface, sea turtles can often ingest it when they surface for air. The sticky oil-water emulsion enters the turtle’s mouth, nostrils and eyes, severely restricting their vision and breathing. This impairment often overwhelms turtles; the ingested tar balls contain toxic compounds that remain in the digestive tract for several days until fully absorbed into the vital organs. Conditions such as gut blockage, starvation and buoyancy syndrome tend to result, which can be deadly if left untreated.

Sea turtles are vulnerable to the impacts of oil at all stages of their life; eggs, post-hatchlings, juveniles and adults. If sea turtle nests are exposed to oils washed up on the beach, this can increase egg mortality and may lead to deformities in the surviving hatchlings. Hatchlings that encounter spilled oil will have trouble swimming, making them more vulnerable to predators. Any oil that sediments in turtle foodstuffs and is consumed would significantly affect the overall health of the turtle.

Tara sadly only represents one case of the suffering and endangerment to marine life as a result of accidents and human industry.

Survey: Status of Sea Turtles in the Maldives

There are seven species of sea turtles in the world, with five species found in the Maldives; Leatherback (Dermochelys coriacea), Loggerhead (Caretta caretta), Olive Ridley (Lepidochelys olivacea), Green turtle (Chelonia mydas) and the Hawksbill turtle (Eretmochelys imbricate). By far the most sighted turtles in the Maldives are Hawksbills, followed by Greens. The sightings of Olive Ridley turtles are mainly the result of entanglement in abandoned fishing nets, drifting into Maldivian waters.

Sea turtles are protected under the Environmental Protection and Preservation Act (4/93) of the Maldives, however, there are still numerous cases of poaching of sea turtles and their nests, regardless of this legislation. Turtle eggs harvested from nests are sold in local islands for MVR 2-5 (US$ 0.13-0.32). Furthermore, newly hatched sea turtles are occasionally caught on the beach and kept as pets in local islands, with the owners often unaware of the harm being done in attempting to raise them in poor conditions.

In order to gain some insights into the levels of knowledge of the Maldivian public regarding the status of sea turtles, we decided to conduct a simple survey using the Instagram social media platform. A total of 9 questions ranging from the protection status to the threats facing sea turtles were posted to Instagram from 6-13 January 2020. Questions were posted on our Reefscapers’ Instagram page, currently with 363 followers mostly based in the Maldives (obtained via ‘insights’).

We received a response rate of 24%, with the results showing an encouraging level of awareness in the issues facing sea turtle conservation in the Maldives. Interestingly, the public seemed unaware of the prevalence of sea turtle nest poaching in the country, so our survey proved to be a useful educational tool.

Turtle photographs are kindly sent to us from members of the public, fellow marine biologists and dive centres stationed at other resorts around the Maldives. Submissions consist of close-up photographs of the turtle facial profile, enabling us to outline the unique pattern of scales (scutes) that act like a human fingerprint.

During January, we received 46 submissions from the public to our national Maldivian turtle ID project (thank you, everyone). These bring the database totals of unique turtle individuals to: 1220 Hawksbills, 210 Greens and 56 Olive Ridleys. 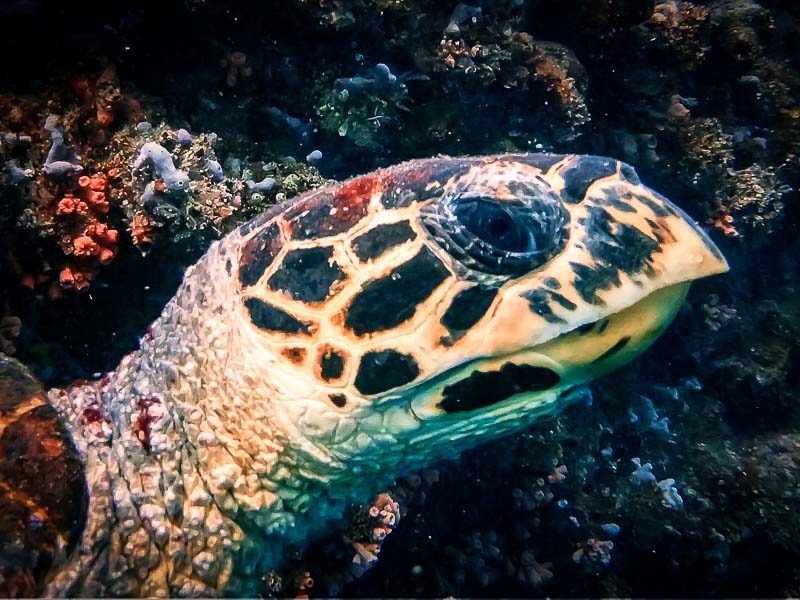 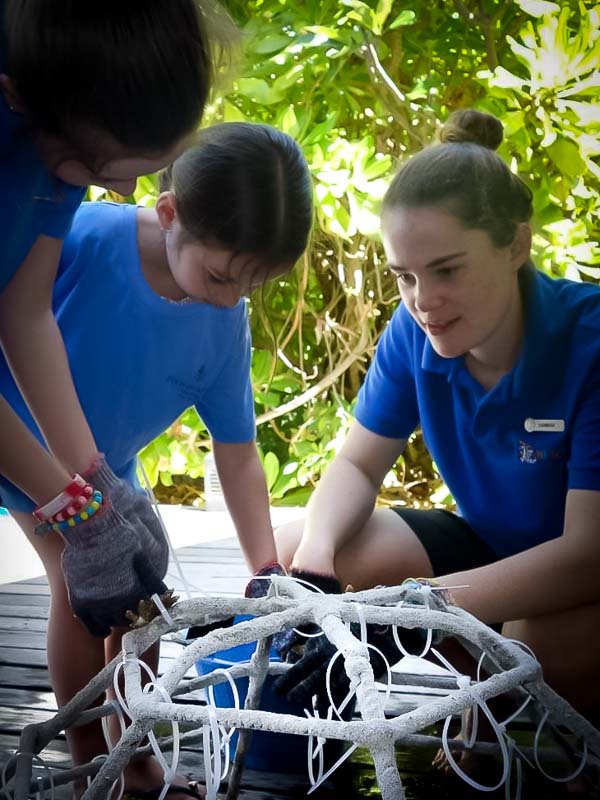 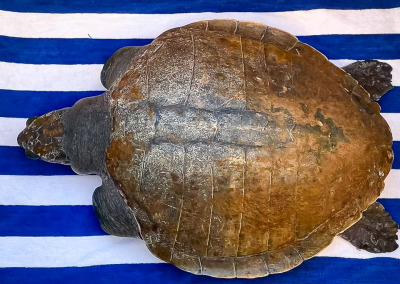 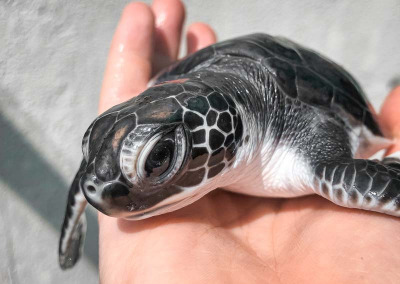