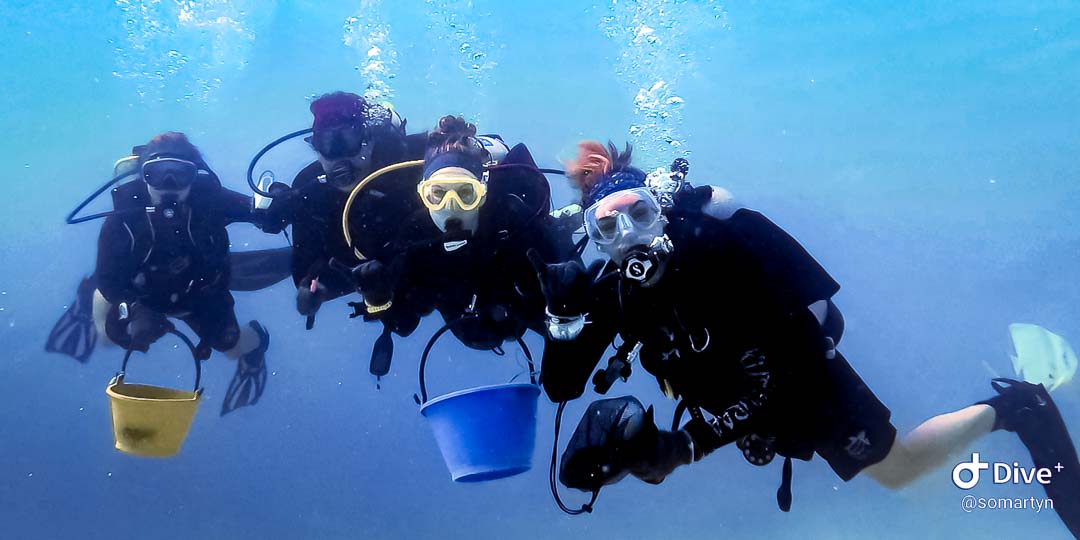 Hi, everyone! 🙂 We’re Martyna and Sorin the two interns at the Marine Discovery Centre Kuda Huraa, working solely on the coral restoration program. Having both completed our Masters’ degrees recently, we were eager to completely immerse ourselves in the underwater world after solid stints studying in the library. Neither of us has previously worked on a coral restoration project and this internship opportunity gave us the perfect chance for hands-on field work experience.

The global coral bleaching event in 2016 hit the Maldives hard, with around 80% coral mortality in some areas of the Maldives with successive bleaching since then. Therefore, the goal of the program is to restore existing coral reefs around Kuda Huraa as well as enhancing the resilience of the coral reefs by transplanting known resistant coral species. We’re here to get a jump start on transplanting corals in order to give the coral an opportunity to establish before sea surface temperatures begin to seasonally elevate in March-April next year. Our current tasks are divided into: maintaining the 2,000+ existing coral frames, collecting coral fragments and transplanting them, as well as creating new coral frames and coating recycled ones.

Typically, each day involves a solid 7 hours in the water … which we LOVE! 💙. This usually begins with a kayak out to the reef crest for coral collection. We identify our target coral species and remove up to 10% of the colony as fragments, so as not to compromise the mother colony. We then frantically kayak back – to reduce stress on the corals – before sorting them for transplantation. Transplanting involves attaching each individual coral fragment to the underwater coral frames; it’s a great opportunity to see resident marine life such as black-tip reef sharks and eagle rays cruising past us as we work. The afternoon commonly consists of maintaining existing frames, which involves hammering dead colonies to make space for new coral fragments to be transplanted. Despite being a seemingly simple task, this is not without competition from other marine life, namely the orange-lined triggerfish, which is in battle with Sorin, having singled her out as the main competitor for small crabs that hide in the corals, much to Martyna’s delight. Despite all the fun we have in the water, we do have some land-based tasks, namely recoating recycled coral frames. The purpose of this is to coat the frames with a resin and sand to protect the metal frames from rusting and provide a more natural surface for corals to encrust onto.

Recently we have been visiting areas on the house reef to remove old frames that have been there for over 5 years but unfortunately have not survived recent bleaching events. This entailed the whole MDC team coming into the field on SCUBA to dislodge the frames that were buried in the sand and moving them to shallower areas. We then returned to free dive for the frames where, with plenty teamwork and extensive use of ropes, we were able to remove the frames so they can be recycled for later use.

Working together has been a blast, from quizzing each other on our coral ID, to battling insanely strong ocean currents together! We already feel like we have learnt and accomplished a lot. Two local apprentices, Len and Saneeh, have been joining us with some daily tasks, which has been a great help. As a small team under the supervision of ‘Suppy Sam’, the coral biologist, we have collected and transplanted nearly 7,000 coral fragments! And recent milestones including the clearing all 451 existing coral frames at the Water Villas have been spurring us on! 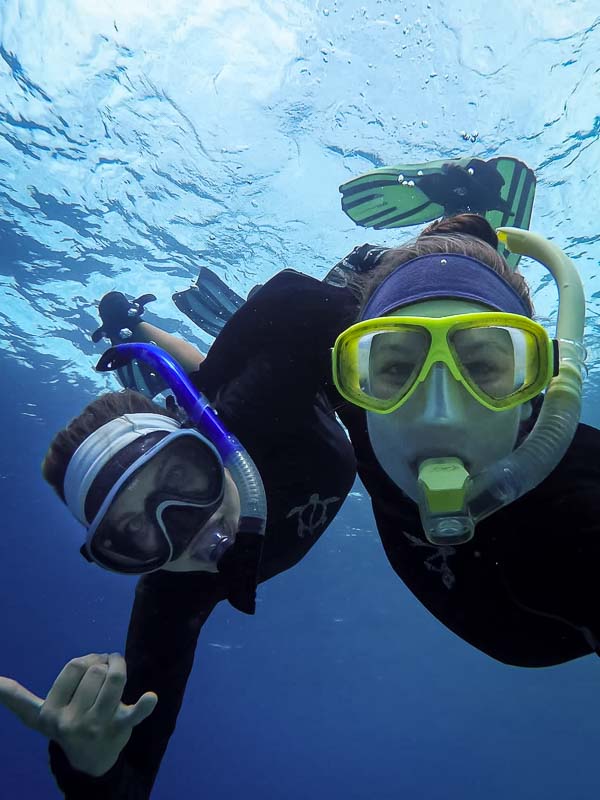 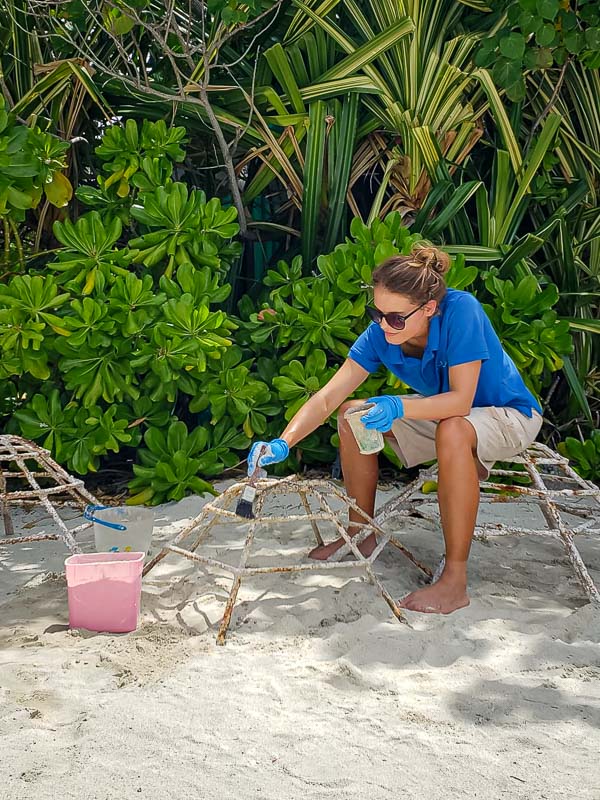 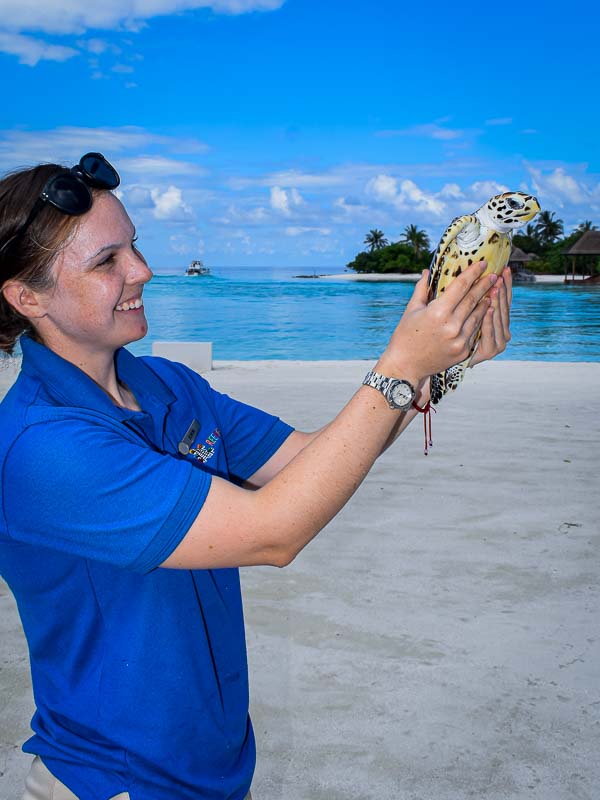 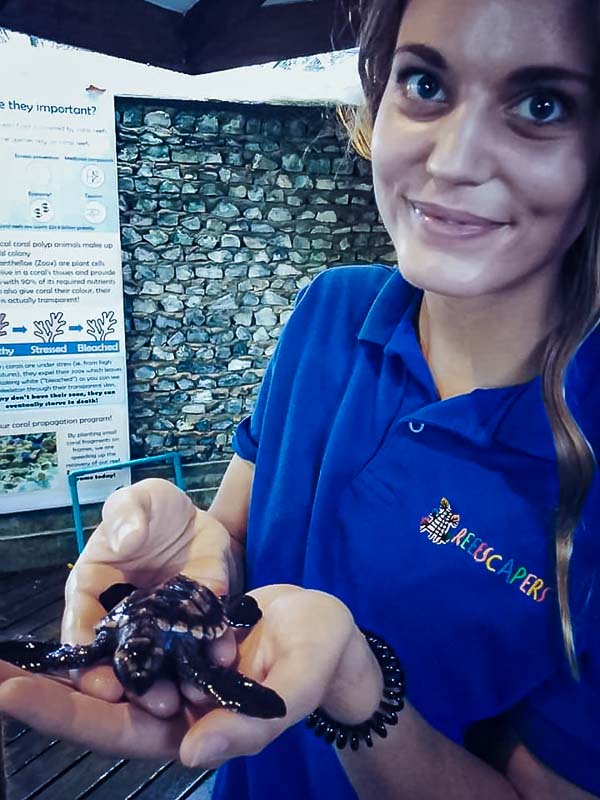 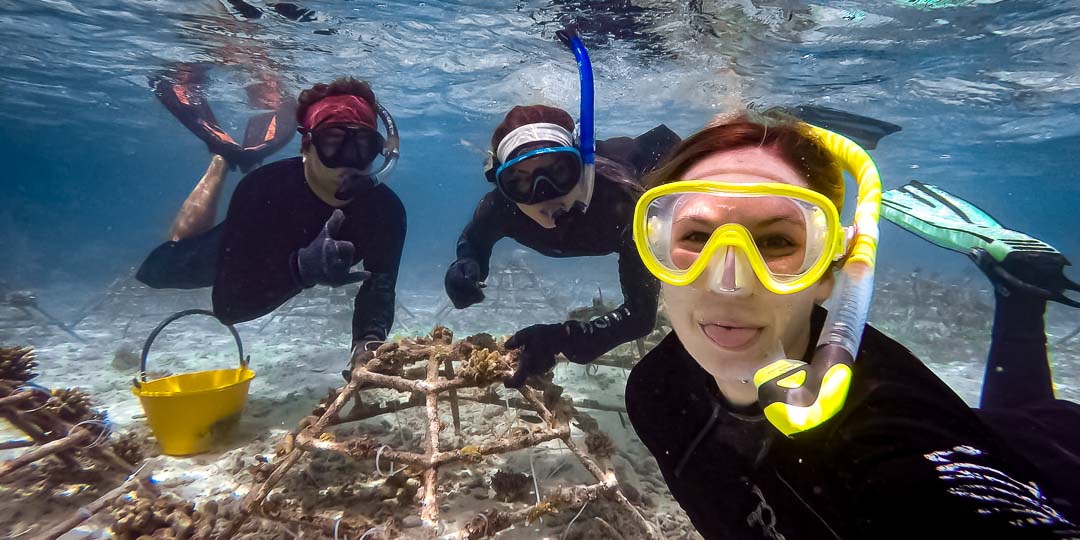 We’ve been experiencing unusually stormy periods recently, restricting our in-water activities but giving us the chance to assist with the Turtle Rehabilitation program. This has been a fantastic learning opportunity, as neither of us has previously participated in programs such as this. We’ve been able to help with turtle feeding and even assisting with the treatments and medications for various turtles.

One of the turtles – Sadamo – arrived during the beginning of our internship after being found by crew on Four Seasons Explorer, entangled in a ghost fishing net. She had lacerations on one of her flippers as a result of becoming entangled in the abandoned netting, unfortunately a common threat for many sea turtles. After recovering from her wounds and overcoming buoyancy issues she was ready for release at the beginning of November. It was a tremendously special moment for both of us, being able to participate in the release of Sadamo, having witnessed her rehabilitation journey from start to end.

Work with the Coral Propagation program has been going well! We have a recent addition to the team with the arrival of Sophie, our new Marine Coral Biologist. This has meant in-water time as a team of four, with Sam bringing Sophie up to speed with the principles of coral restoration. We also had our first team outing to attend the ‘White Fire’ exhibition at the National Art Gallery in Malé, to support Sam as he presented the current work we’re doing. We also heard from Gaetan about the AI Catamaran project on Landaa Giraavaru.

We have been busy cleaning 66 recycled frames, by hammering away any dead coral fragments, scrubbing off any algae, then using the high-pressure hose for final cleaning. Once the frames are dry, they will be recoated.

As a duo, we’ve slowly but surely been mastering the art of coral collection and transplantation, with a recent snorkelling record of collecting and transplanting over 800 coral fragments in one day! We have currently collected and transplanted over 13,000 coral fragments, and this is whilst completing other tasks such as in-water clearing, recoating and recycling of old frames. 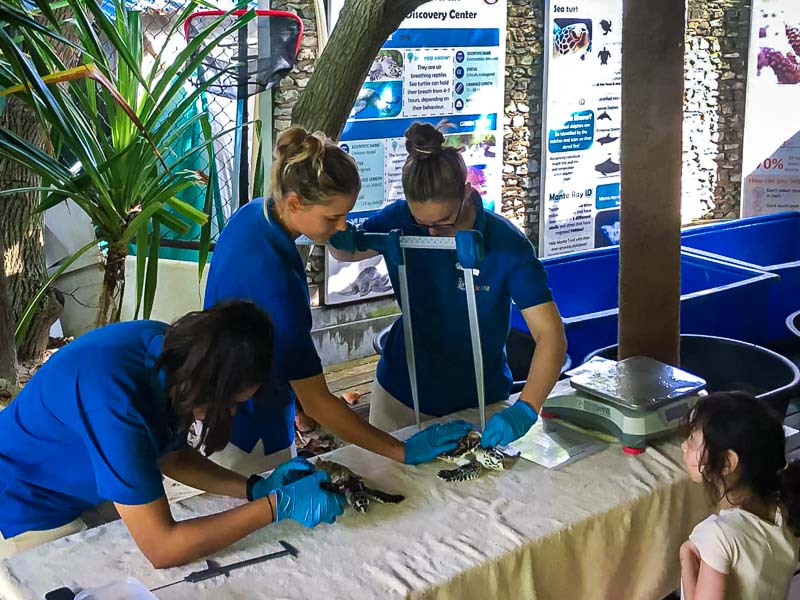 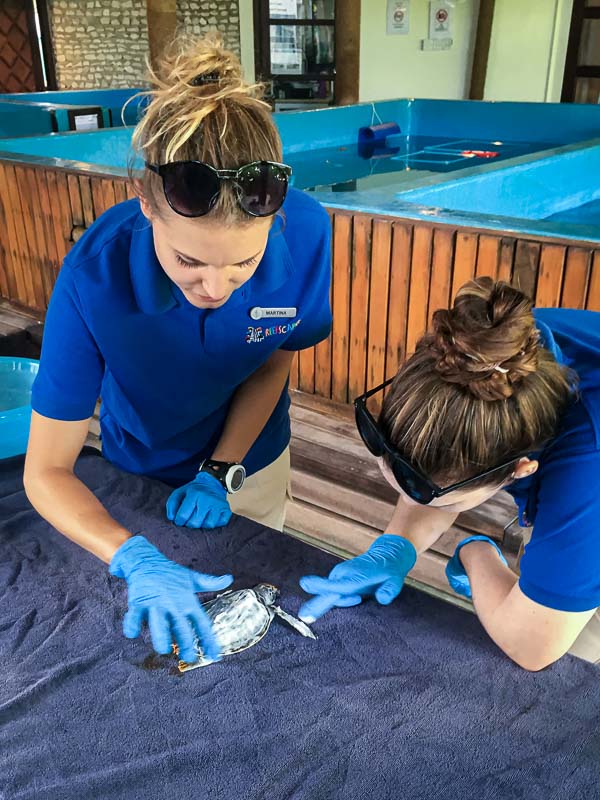 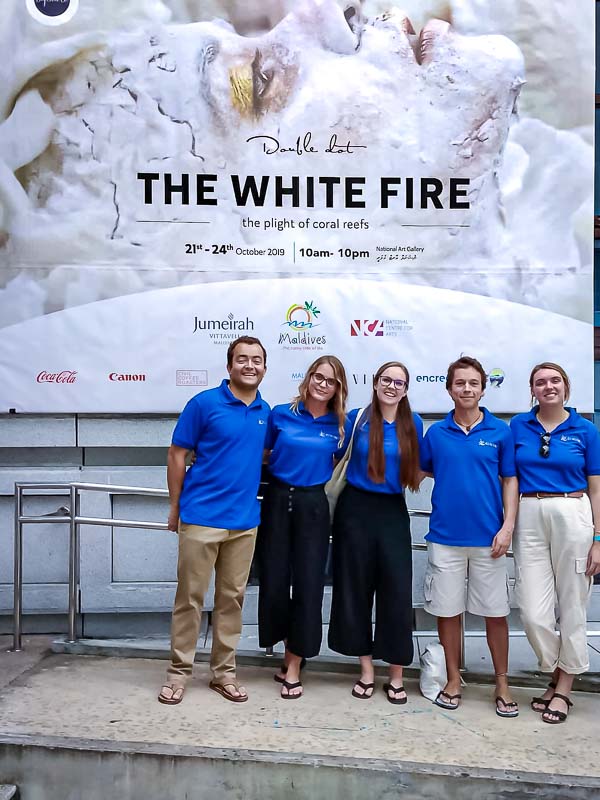 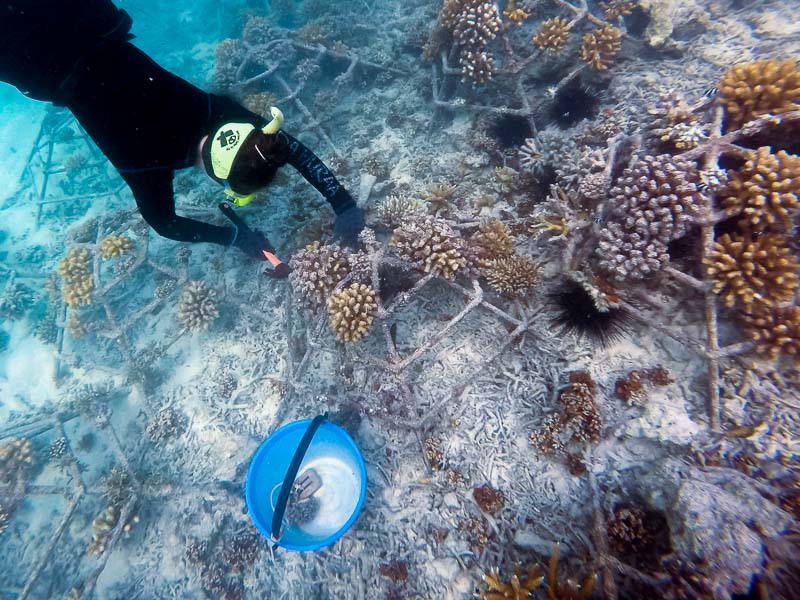 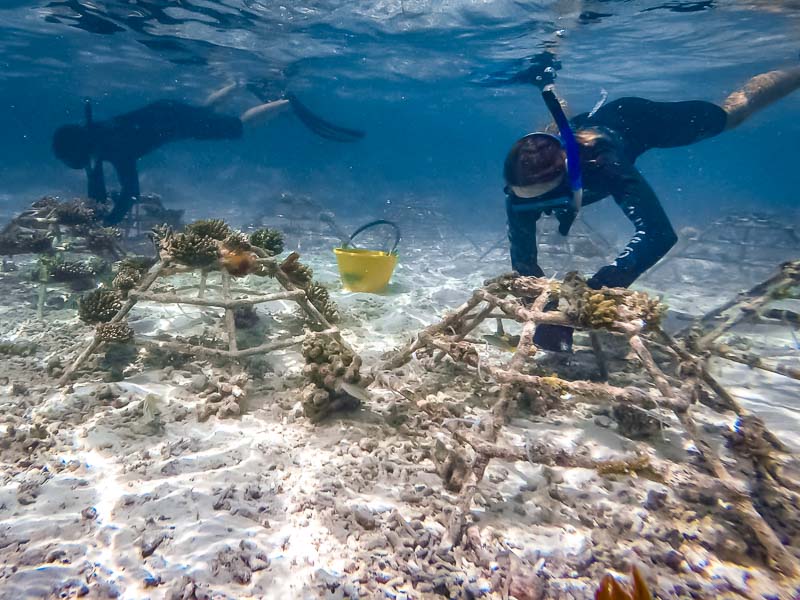 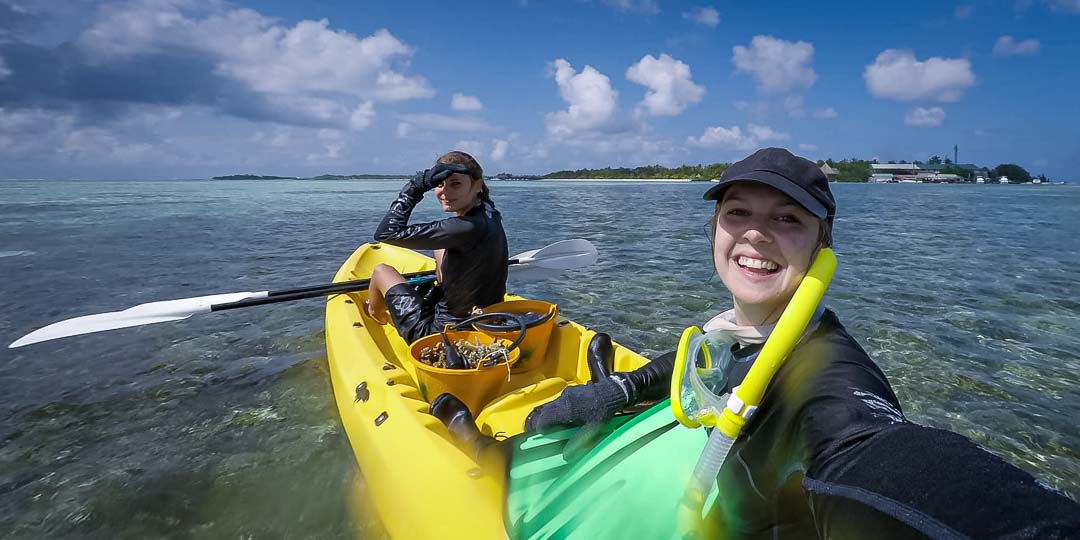 During the final weeks of our internship, the focus has been to establish as many coral fragments around Kuda Huraa as possible, which means less frame coating (yay!) and more coral transplanting (yay!!). We’ve recently started work on the ‘Starfish’ shape at the House Reef. To prevent encroaching sedimentation on the coral frames, we moved all 106 frames to a nearby harder substrate, and then started transplanting new coral fragments. As part of a team SCUBA trip, we also visited the house reef to transplant fragments to existing frames.

There has been an influx of new turtles being admitted to the rehabilitation centre as we come into the ‘season’. Many turtles entangled in ghost nets are carried from neighbouring countries into Maldivian waters, due to the change in currents. We received two turtles within 2 days, and Landaa received two turtles in 1 night. We have been assisting with the turtle admission process, and helping to administer treatments. Lately, we’ve been taking our turtle patients for ocean swims, including Bowser and Erica, who both have amputated flippers. This provides them with an opportunity to stretch their flippers and encourages them to dive. Bowser and Erica both have buoyancy issues, and we hope they will slowly be able to overcome this and be released. It’s a great experience for the turtles and for us!

With Martyna off-sick for a few days, Sorin was working in the lagoon as much as possible, and assisting with the turtle rehabilitation centre. A memorable experience during this period was the visit from 12 local Maldivian girls, all under the age of 12 years old. These young ladies had set up a lemonade stand in Malé, and raised significant funds for the turtle rehabilitation program! It was incredibly touching to see their excitement and concern for the welfare of these animals, and their contribution to the program was greatly appreciated.

Halfway through November, and with Martyna back to full health, we achieved an important Reefscapers milestone when we completed the large Water Villas site! This involved the clearing of dead colonies and transplantation of live coral fragments on all 451 frames located at the Water Villas. It only got better from there, as we continued to work on collecting and transplanting corals at the Channel. A week out from the end of our internship we accomplished our next major milestone by clearing all the frames in the Channel, a further 406 frames.

We finished November strong, with a grand total of over 18,000 coral fragments collected and transplanted! We wish our little coral fragments all the best and hope they fare well coming into the warmer months. A huge thanks to the whole team at Marine Savers: Ale, Sam, Felipe, Tori, Sophie and Saskia. We have had an absolutely amazing time. 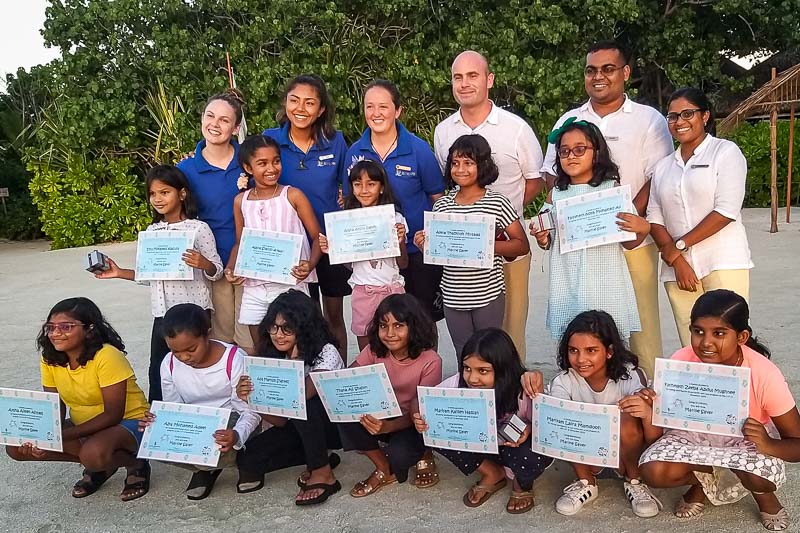 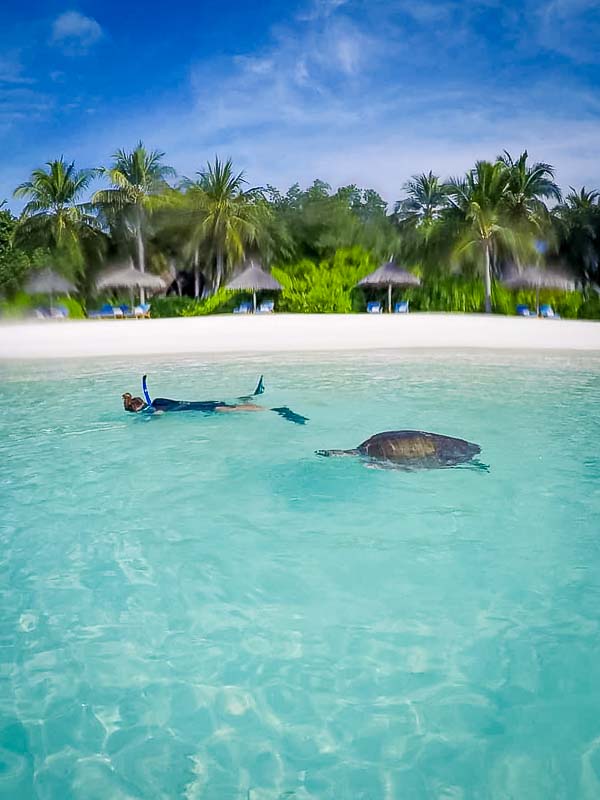 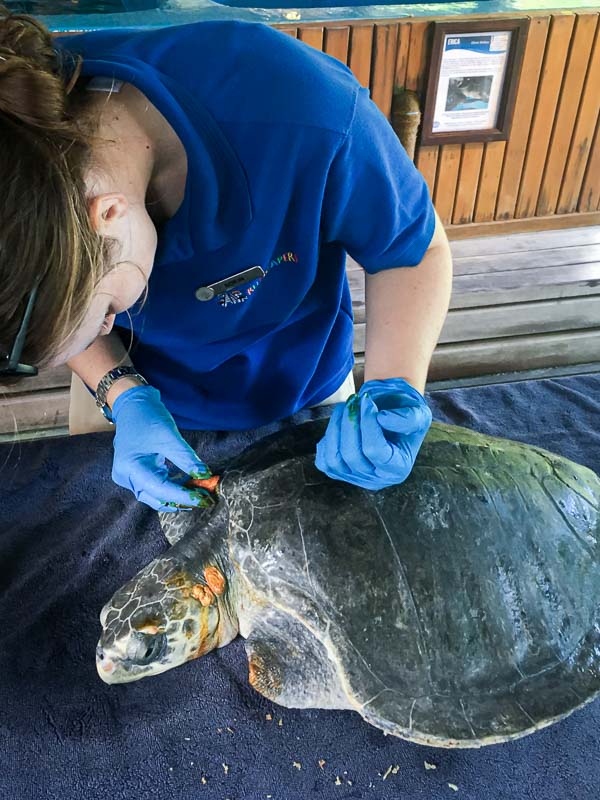 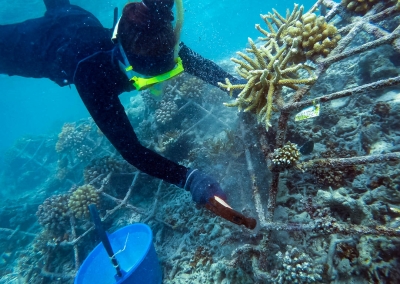 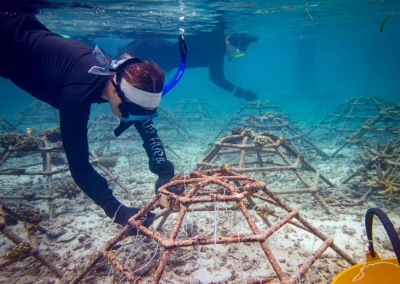 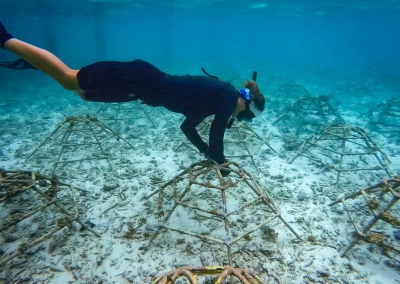 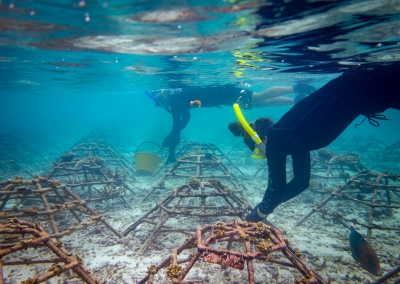 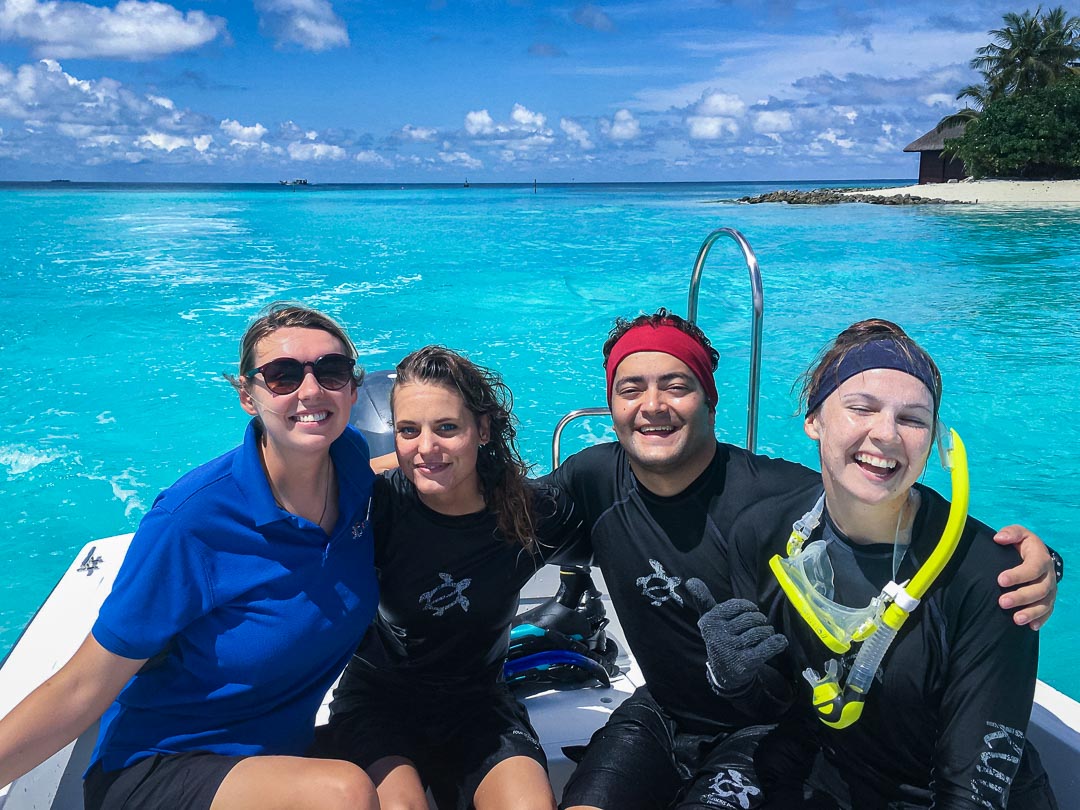