Updates from Landaa and Kuda Huraa

In Aquarium 1, our two Pistol shrimps (Alpheidae sp.) excavated the sand from beneath the rocks, causing instability in the structure. So, we returned the shrimps to the ocean, and we are currently undergoing a redesign:

Aquarium 2 suffered from excess air entering via the inflow. With many tiny bubbles accumulating under rocks and in the water column, one Domino Humbug suffered from bubble eye syndrome (so we immediately released it, for a natural recovery back in the wild).

Recent additions to this tank have been collected near the reef crest:

A leftover fragmented colony of Acropora digitifera with large areas of exposed skeleton will be monitored, to see how it heals and recolonises over time. The larger Clark’s Anemonefish (Amphiprion clarkii) has claimed the anemone, and will actively chase off the smaller one if it gets too close. The smaller Clark’s has claimed the mushroom coral, and is frequently seen swimming around and retreating to it. 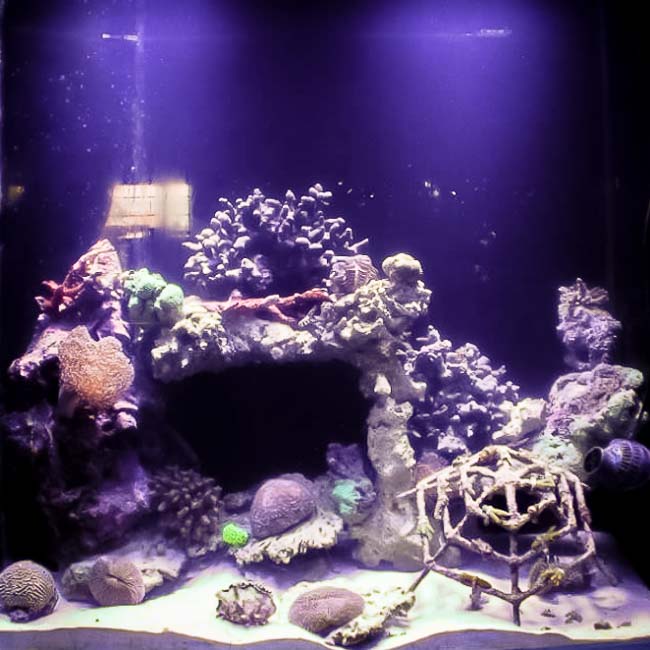 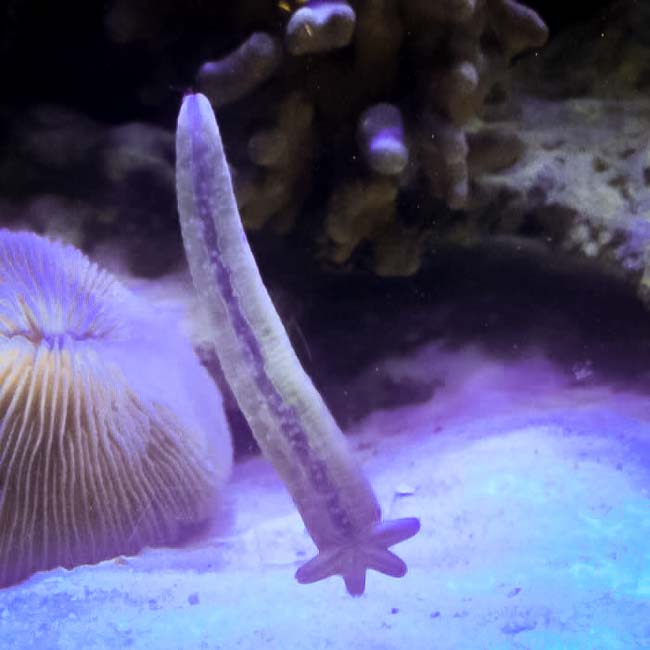 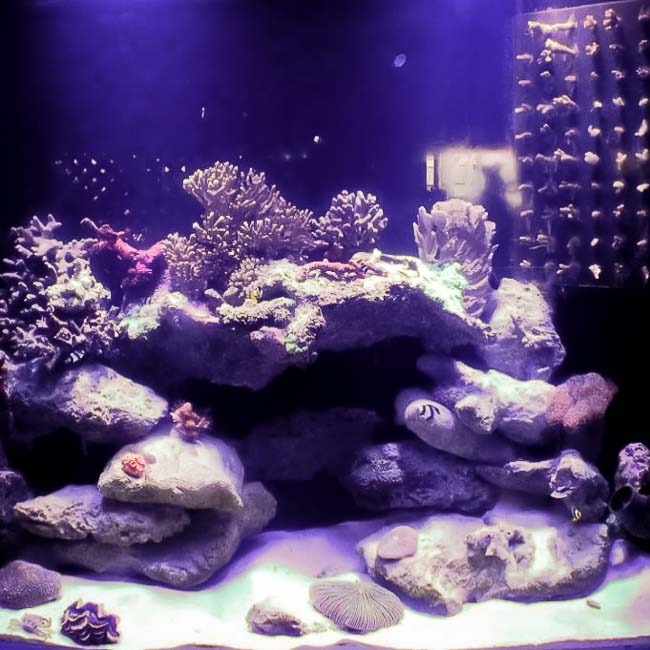 This month, we decided it was time to refurbish our Large Aquarium, its first major project since our complete rebuild last year. We started by removing a few species of corals and returning them to the lagoon, including Favites halicora (hard coral) and Heliopora coreulea (soft coral). In total, we replaced more than half of the aquarium rocks, to create a more open style, dotted with cavities that allow better water circulation and create hiding places for fish.

We are now prominently featuring Goniopora coral species (bright green and red morphs) and live rocks encrusted with young coral colonies (that we hope will spread). We also have Xenia and Zoanthids soft corals (kindly donated by aquarist Hassan Jinah). 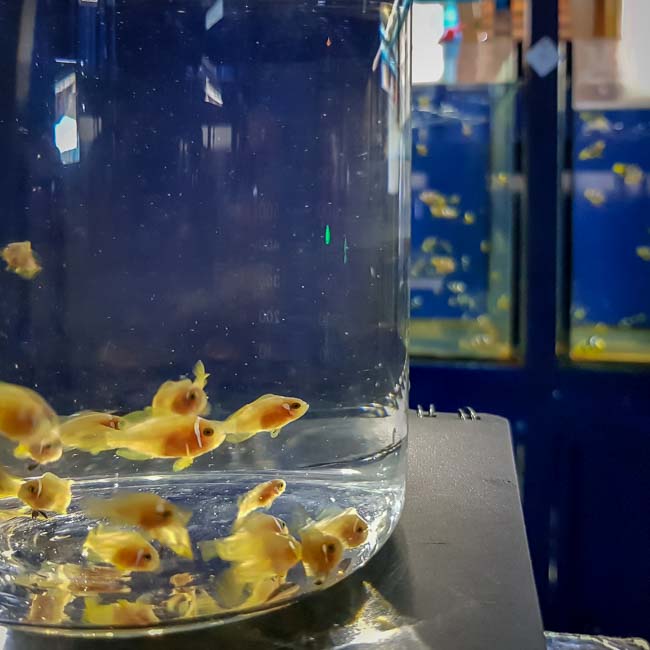 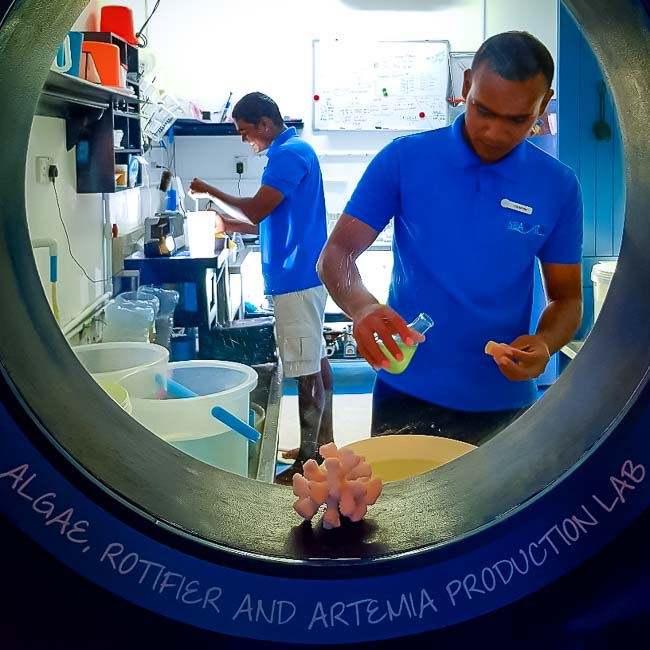 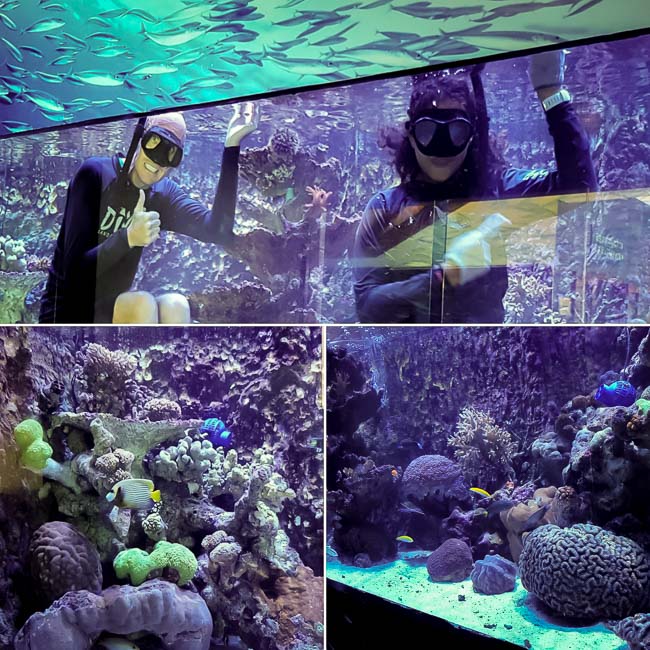 Our Maldivian clownfish (Amphiprion nigripes) breeding pair #21 continues to produce healthy larvae this month, giving a total of 75 juveniles (the 20 juveniles from last month have now graduated to our main public tanks).

During August, we received over 40 photo submissions to our turtle ID programme, resulting in six re-sightings of existing turtles in our database.

Dolphin ID
During August, we recorded 830 Spinner dolphins (Stenella longirostri) around Kuda Huraa, plus 250 Spinners and 33 Bottlenose dolphins at Landaa Giraavaru. This resulted in six Spinners and five Bottlenose being uniquely identified and newly added to our database, plus possible re-sightings of a further 12 individuals. 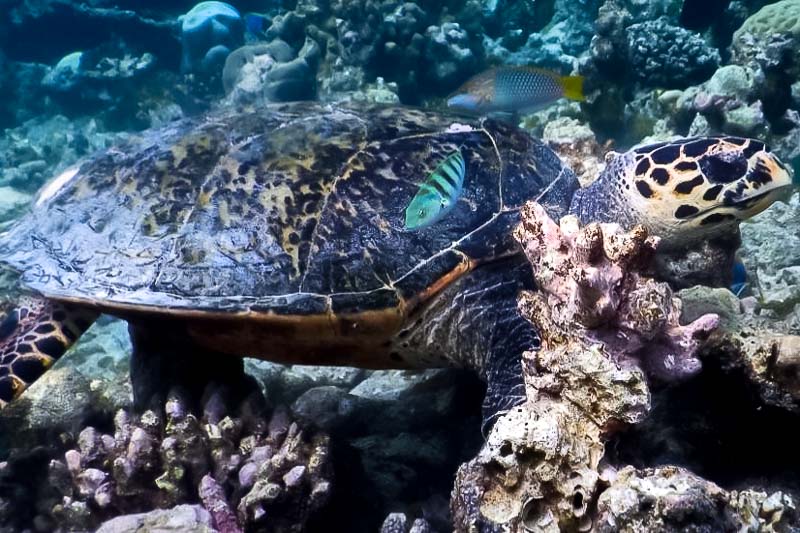 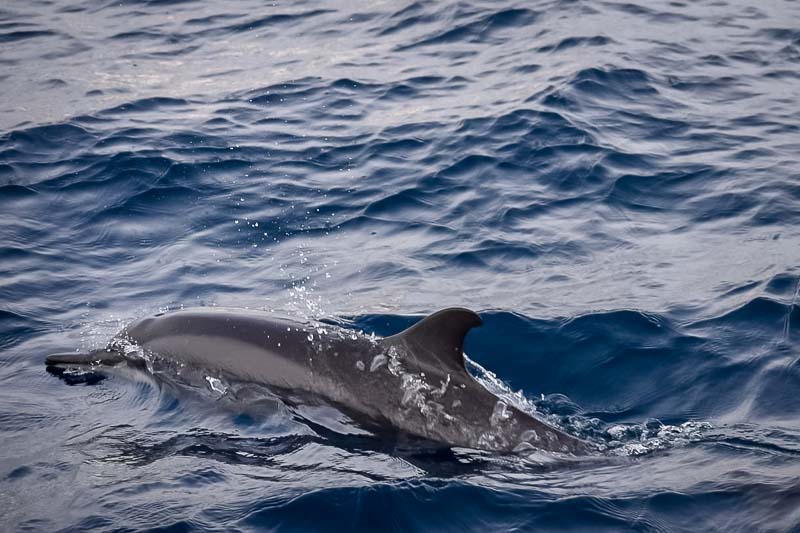 Our 2018 Four Seasons Apprentices are currently hands-on, learning aquaculture in our Fish Lab. We start with lessons on the biology of fish reproduction and development, and go on to cover plankton production (to grow the foods for our fish).

Globally, tropical fish aquaria become more popular with each passing decade, but thankfully, this increasing demand seems to be met by the ever-expanding aquaculture trade (meaning wild reefs globally are not being increasingly plundered). A similar thing has been seen in the food industry, with fish-farming meeting much of the needs of the world’s increased appetite.

Hopefully, the young Maldivian students of today will grow into the marine biologists of tomorrow, and continue to work at finding sustainable solutions that minimise the exploitation of the complex marine environment upon which small island communities depend. 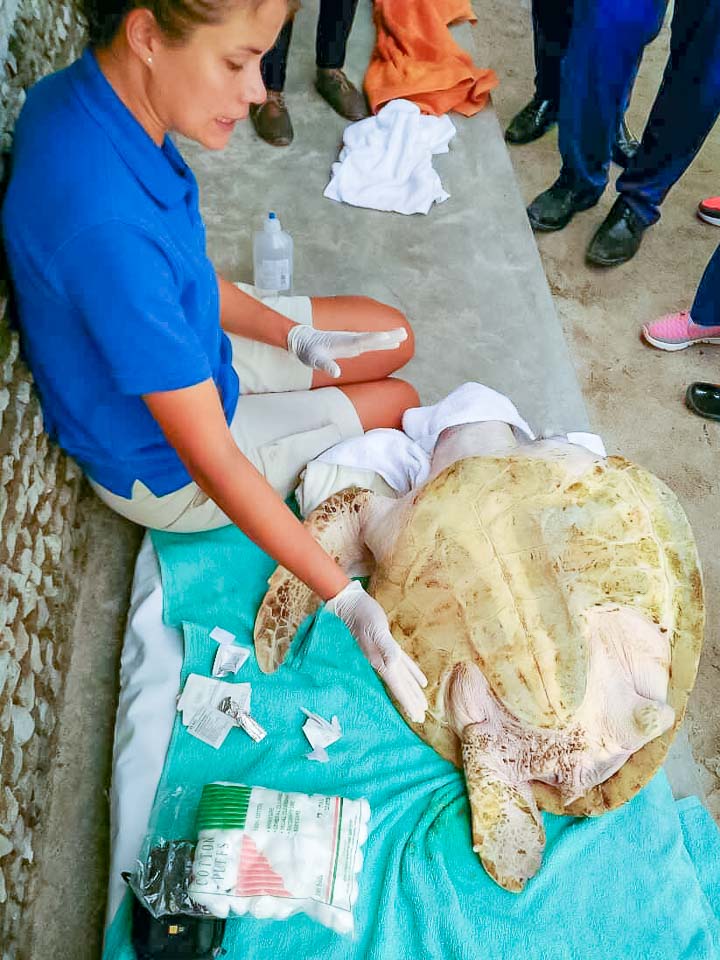 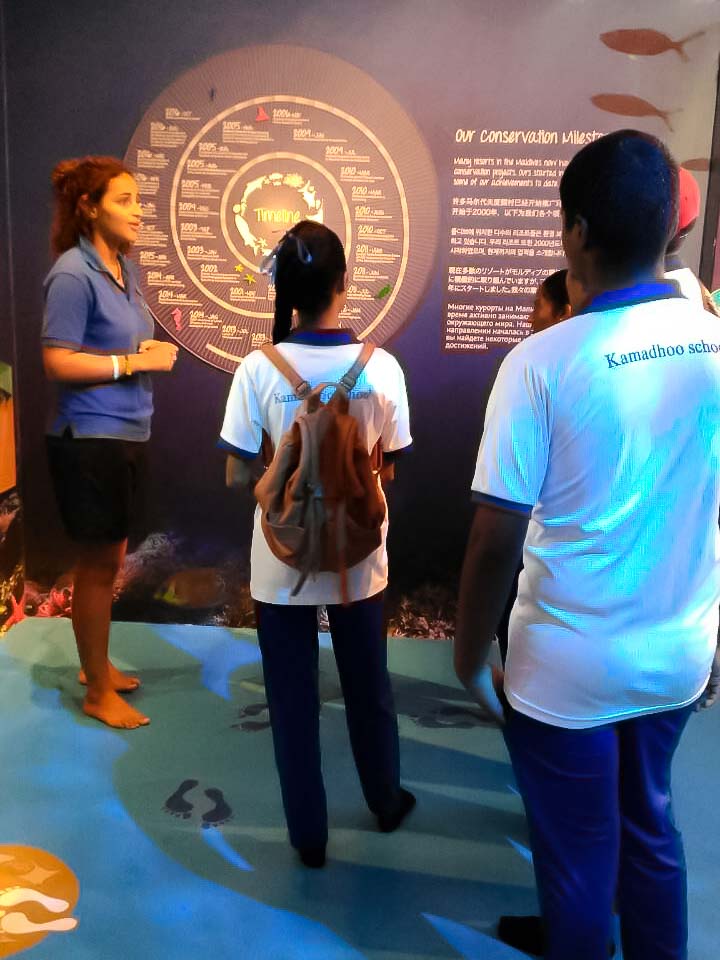 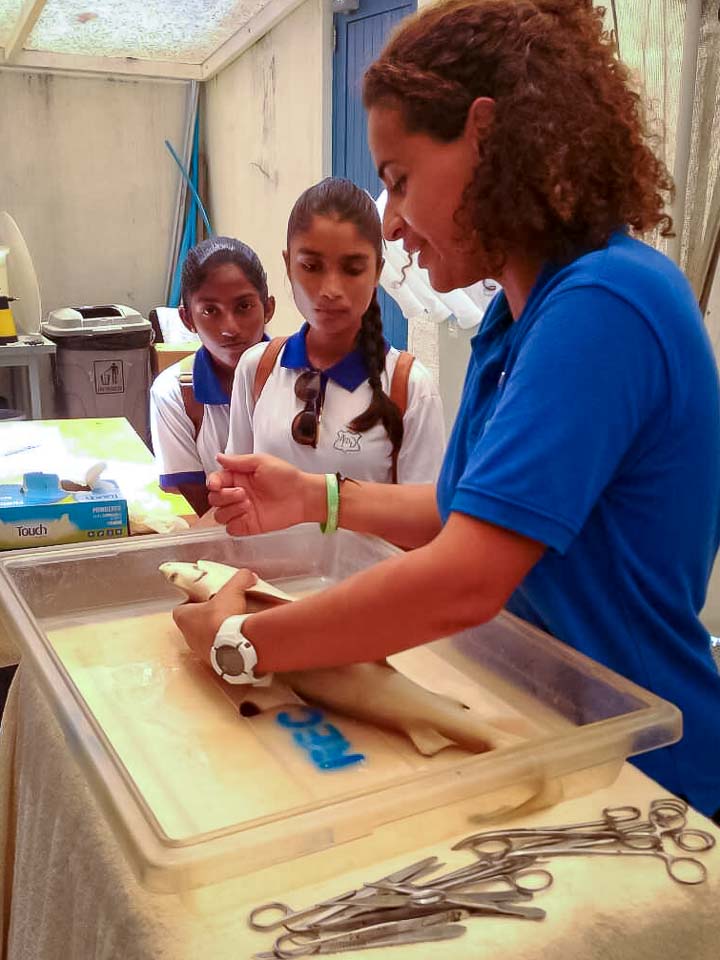 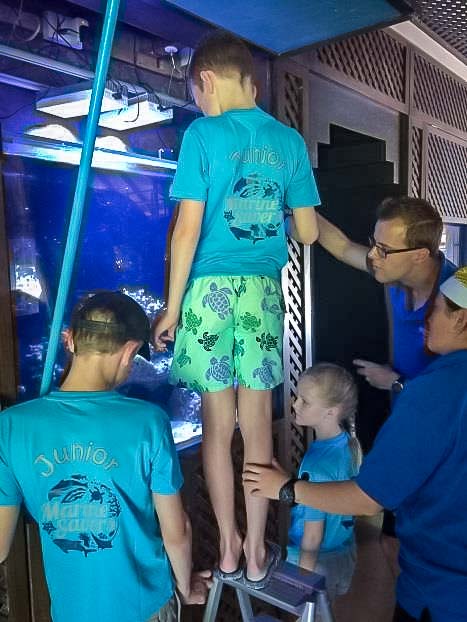 This month, we were delighted to welcome groups of enthusiastic students and teachers from nearby local schools across Baa Atoll. Everyone enjoyed a resort tour, followed by a presentation from our Manta Trust colleagues, before transplanting a new Reefscapers coral frame. If you would like to arrange a ‘Marine Discovery Immersion Tour’ for your school, college or NGO at either Kuda Huraa (N.Malé Atoll) or Landaa Giraavaru (Baa Atoll) – then do get in touch with us! 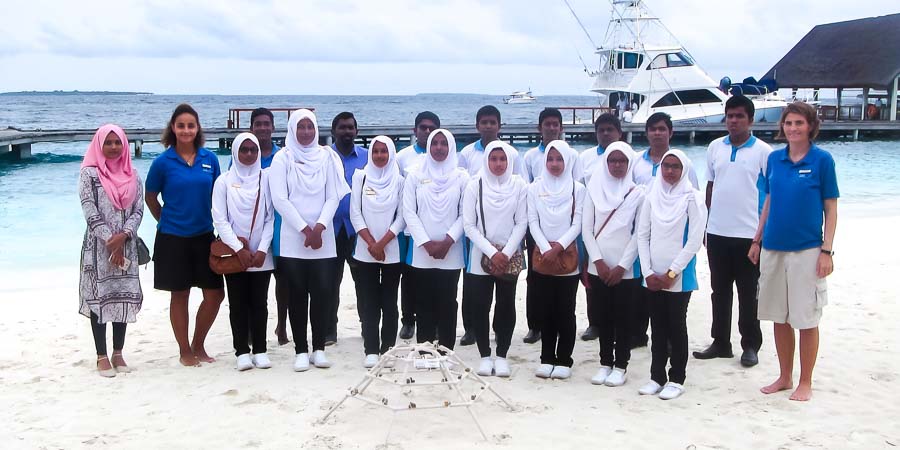 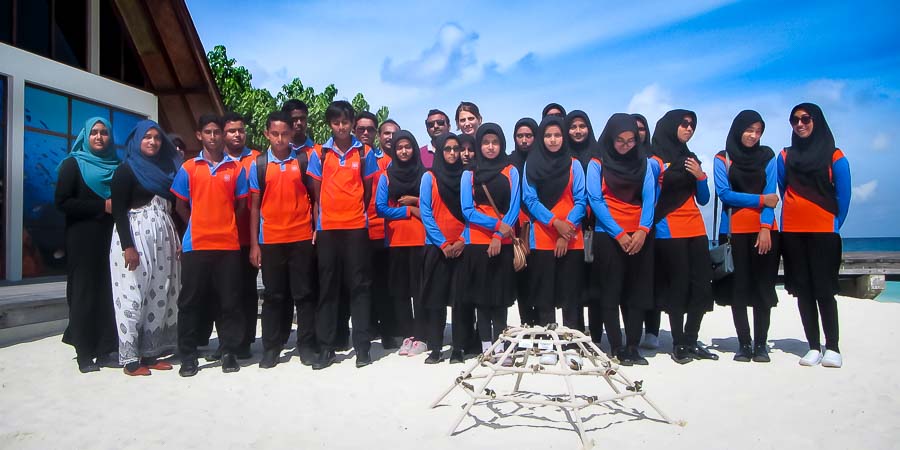 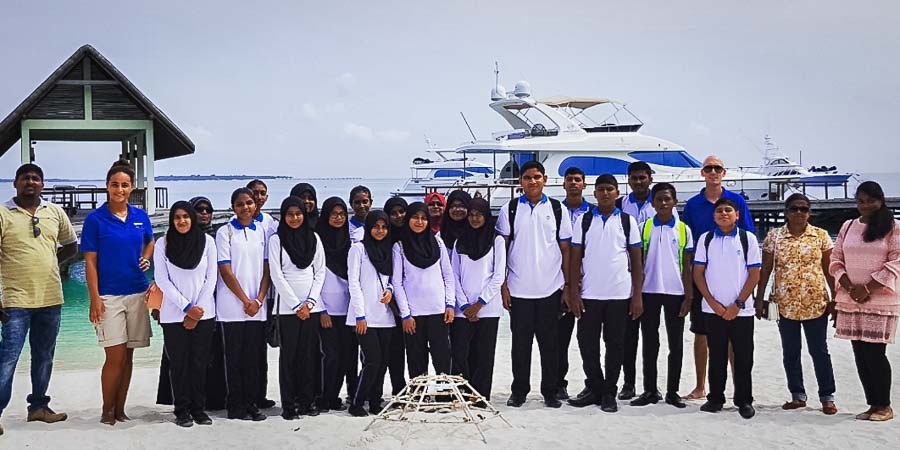 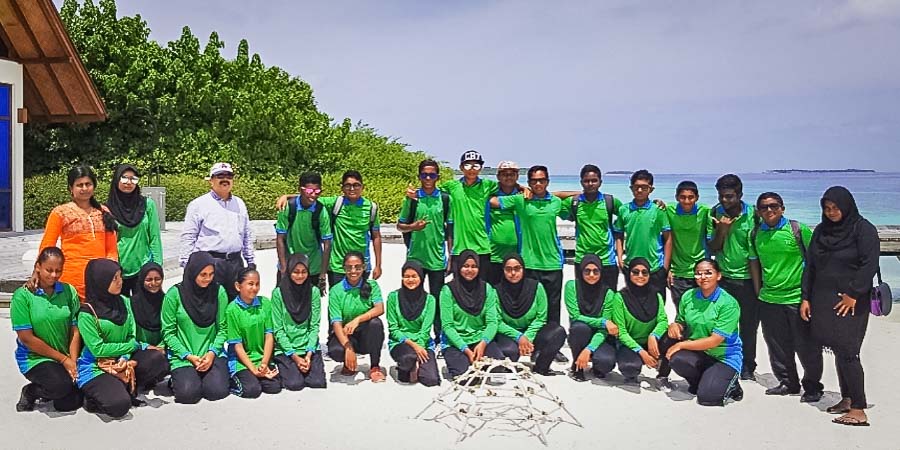 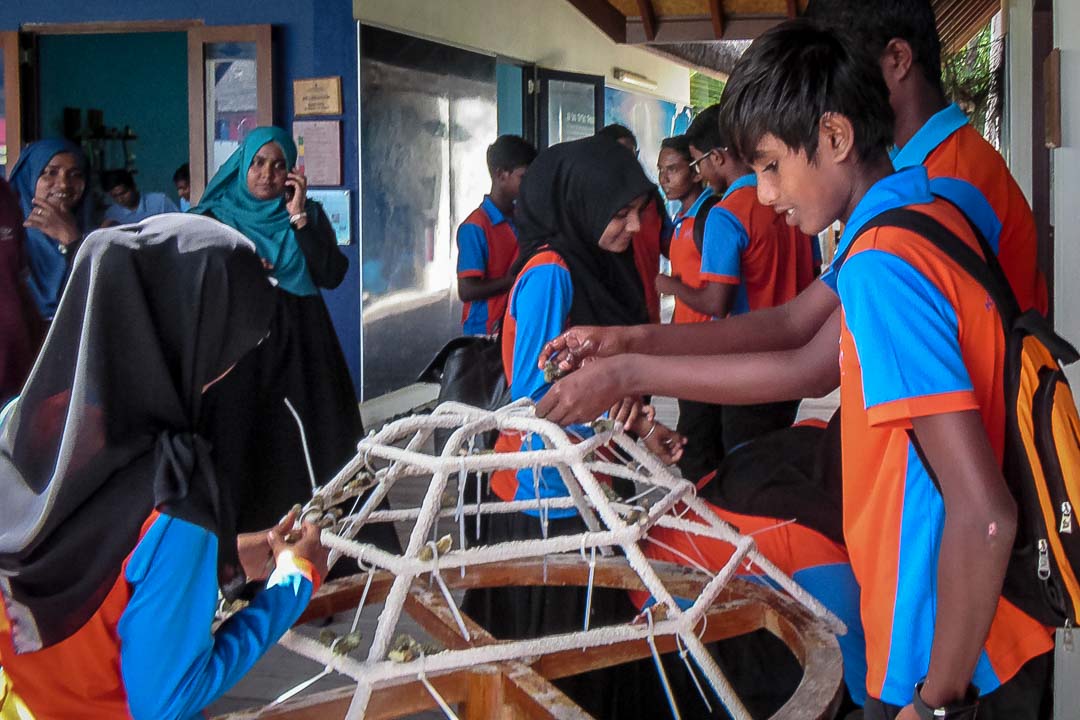 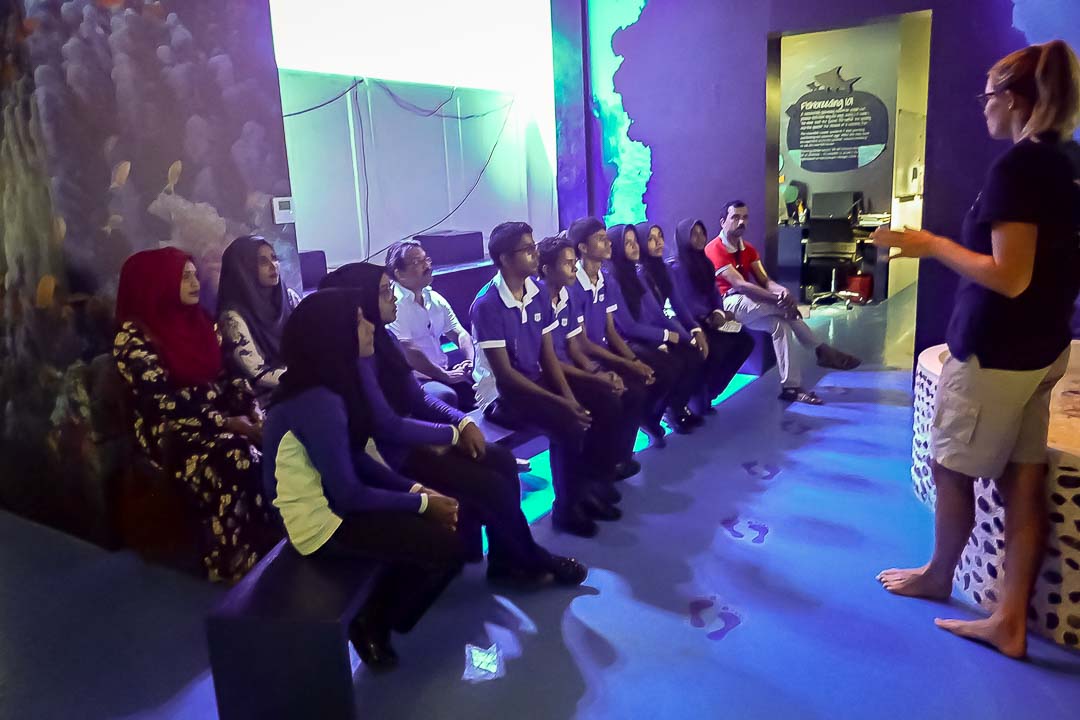 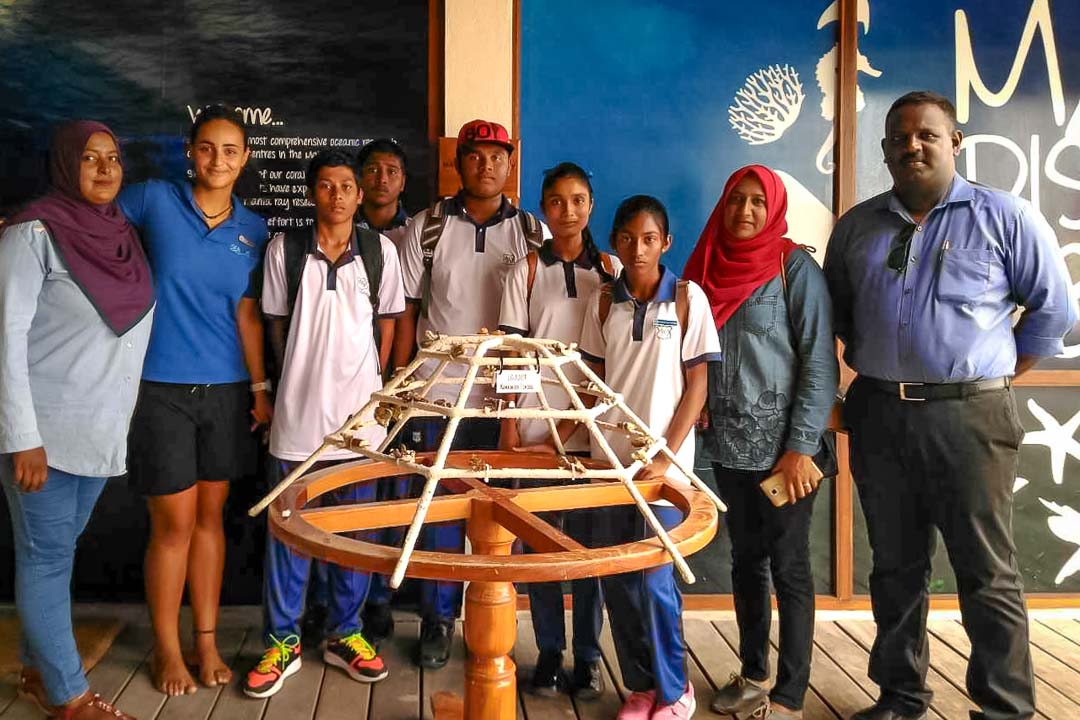 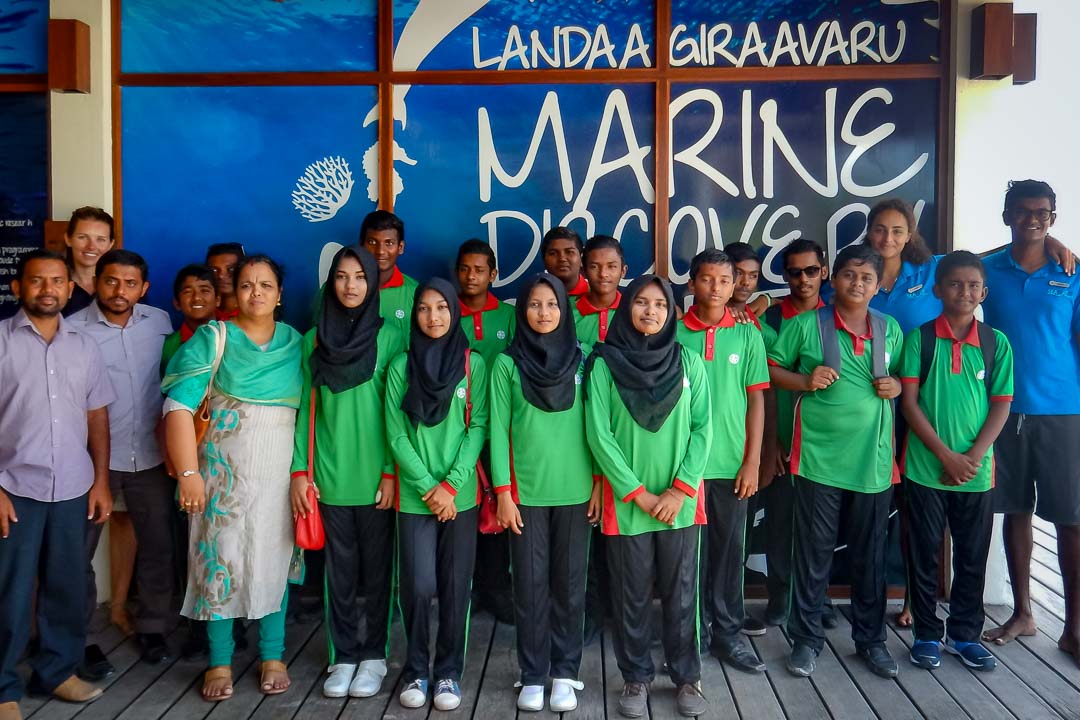 Interested in corals ? Be sure to stay up to date with our coral propagation project by reading our monthly Reefscapers Diary ! 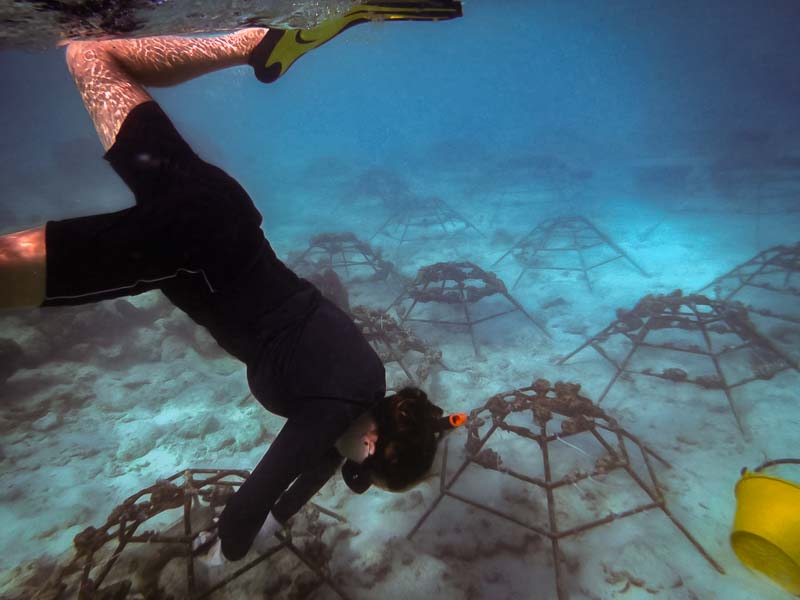 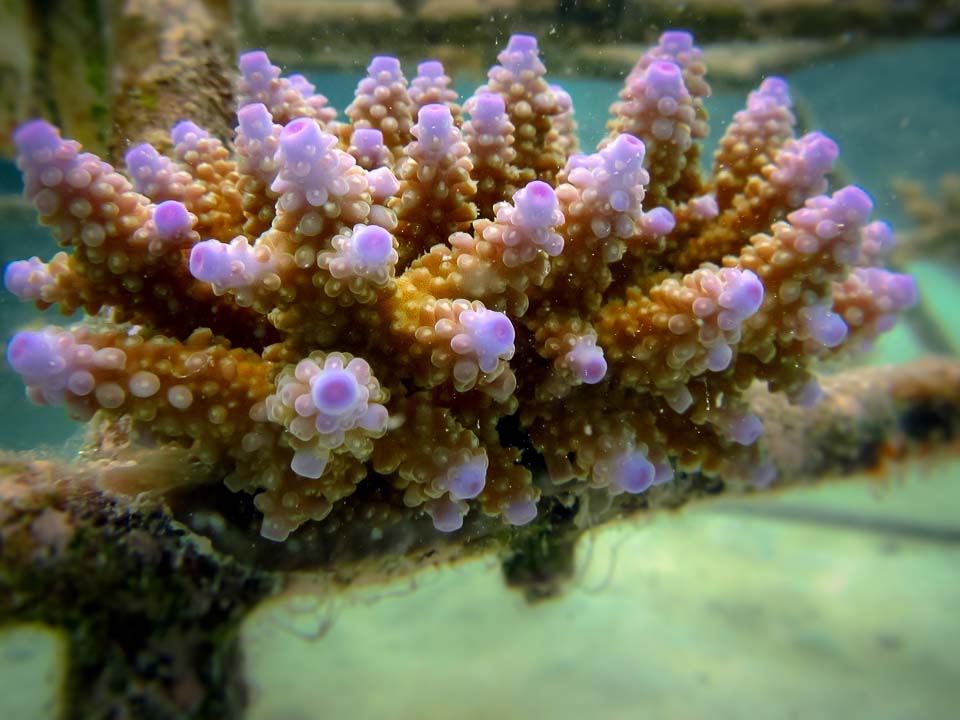 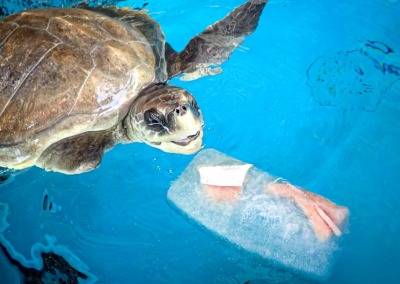 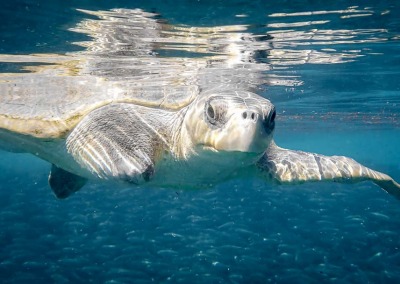 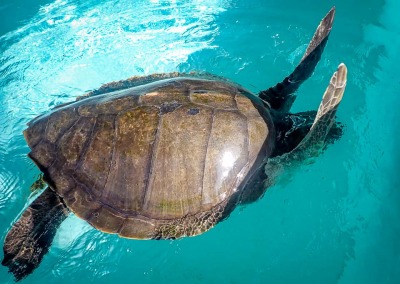 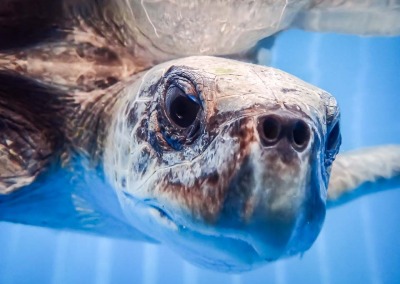 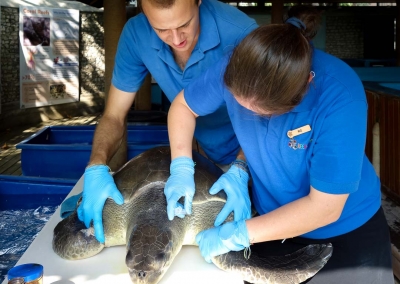