Hello again! Another month here at Kuda Huraa has flown by and it’s been one of new experiences and some wonderful surprises (if you missed them, here is my Chapter 1 and Chapter 2).

This month has been great for the Marine Discovery Centre (MDC), with the release of 2 of our rehabilitation turtles back into the wild, Eddy the Olive Ridley and Ranee the juvenile Hawksbill. We’ve also seen a lot of positive progress with some of our other rehab turtles, such as Donny who after a month of treatment and medication has made a full recovery from her skin infection. 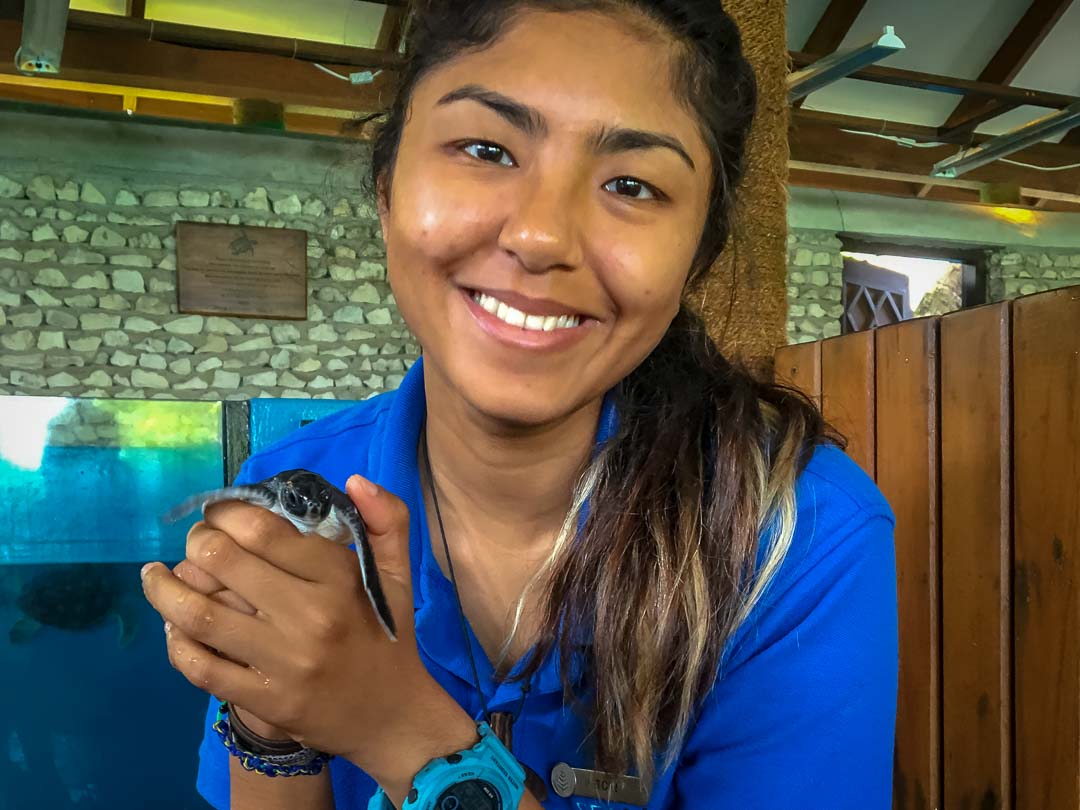 Holding little mini-me ‘Tori’, one of the hatchlings in our head start programme

Ranee the juvenile hawksbill turtle came to us from Bandos reef entangled in a ghost net on 7 March 2018. The entanglement caused severe damage to her front right flipper which resulted in its amputation. After 3 months of rehabilitation and daily care from the Marine Savers team at Kuda Huraa, she reached her target weight and demonstrated that she was able to dive and swim around her pool with ease.

We decided that she was ready to be released back into the ocean and so, on 21 March, we released Ranee back onto Bandos reef where she was originally found. Once she was placed into the water she showed no signs of hesitation, diving straight into the deep blue. Ranee was the first boat release that I had the opportunity to participate in, and I am grateful to have been able to see how the process works. Bandos reef also happens to be a popular snorkel site, so we will all be keeping a keen eye out for our little rehab turtle, hoping for the chance of spotting her again in her natural environment. 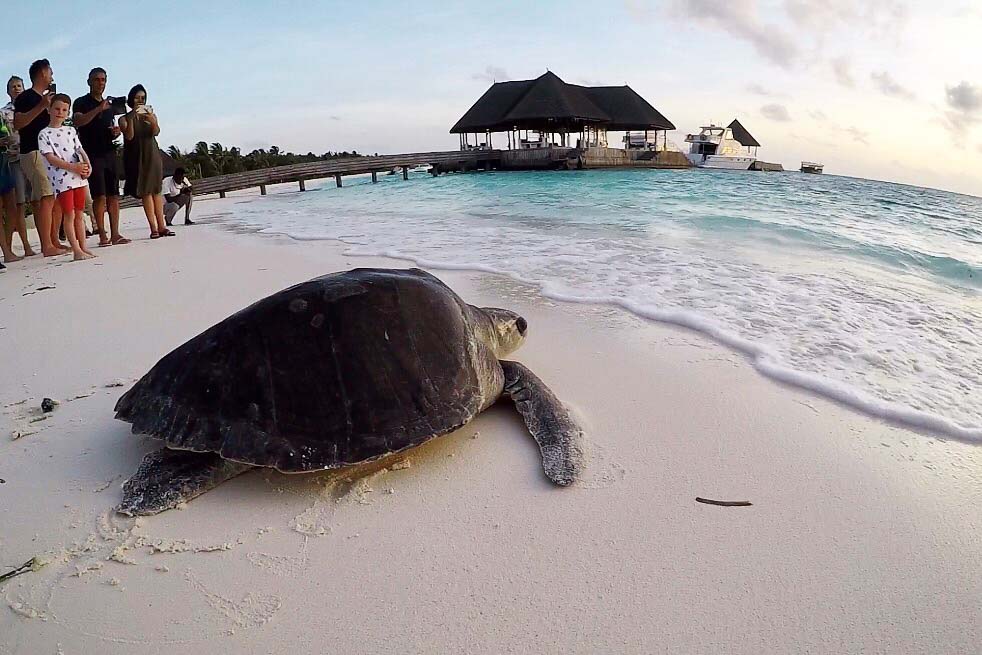 Release of Eddie the rescue turtle

Eddy arrived at the MDC in February after sustaining deep lacerations to both her front flippers as a result of entanglement in ghost nets. After a minor setback during the month of May, developing a skin condition which delayed her release, it was finally time for Eddy to return to the ocean. On 30 May, we released Eddy directly from the beach on Kuda Huraa, and it was great to see all the guests and staff gathered around to bid her farewell. 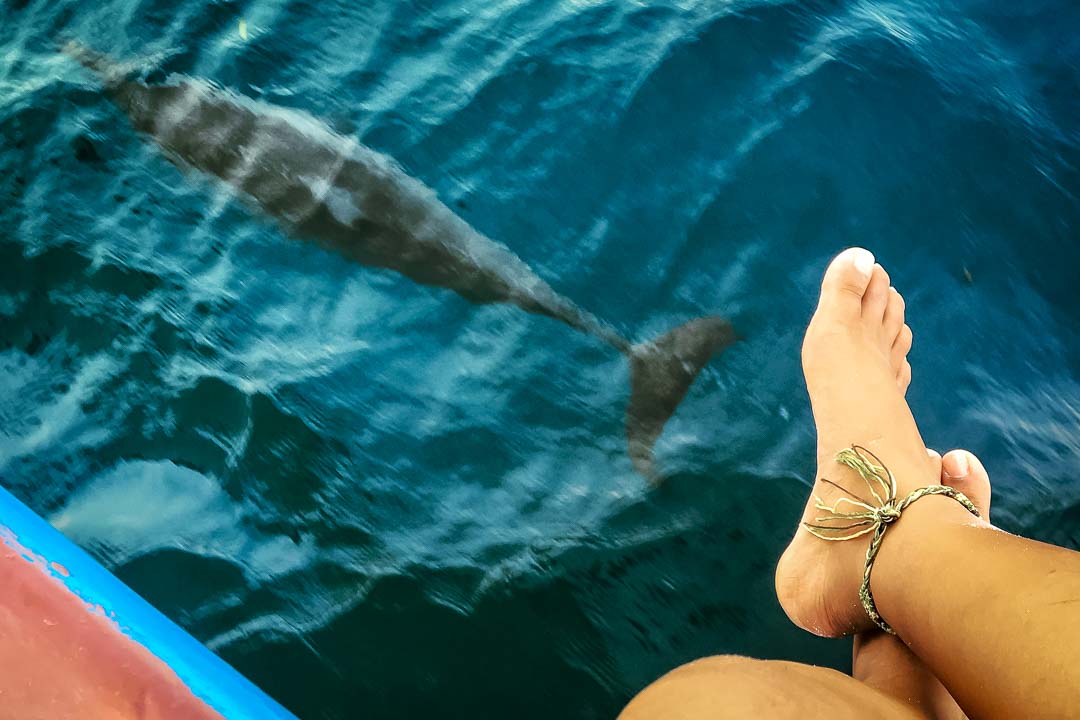 Friendly company on the dolphin cruise

Pilot whales!! Finally, after weeks of searching on every dolphin cruise, we finally had a very special encounter with a large pod of short-finned pilot whales. I was the most excited person on the boat as we cruised alongside over 50 individuals including calves. Cetaceans are an incredible group of marine animals and being able to witness this species in their natural habitat was a wonderful experience.

May was definitely a month of firsts, as I also had my first encounter with a fever of eagle rays on one of our snorkel trips. We were swimming alongside the reef when approximately 10 individuals came ‘flying’ up from the open ocean. They swam alongside us for a brief moment before passing and disappearing into the blue. First encounters with animals you’ve never seen before are always thrilling and these 2 encounters were nothing short of that. 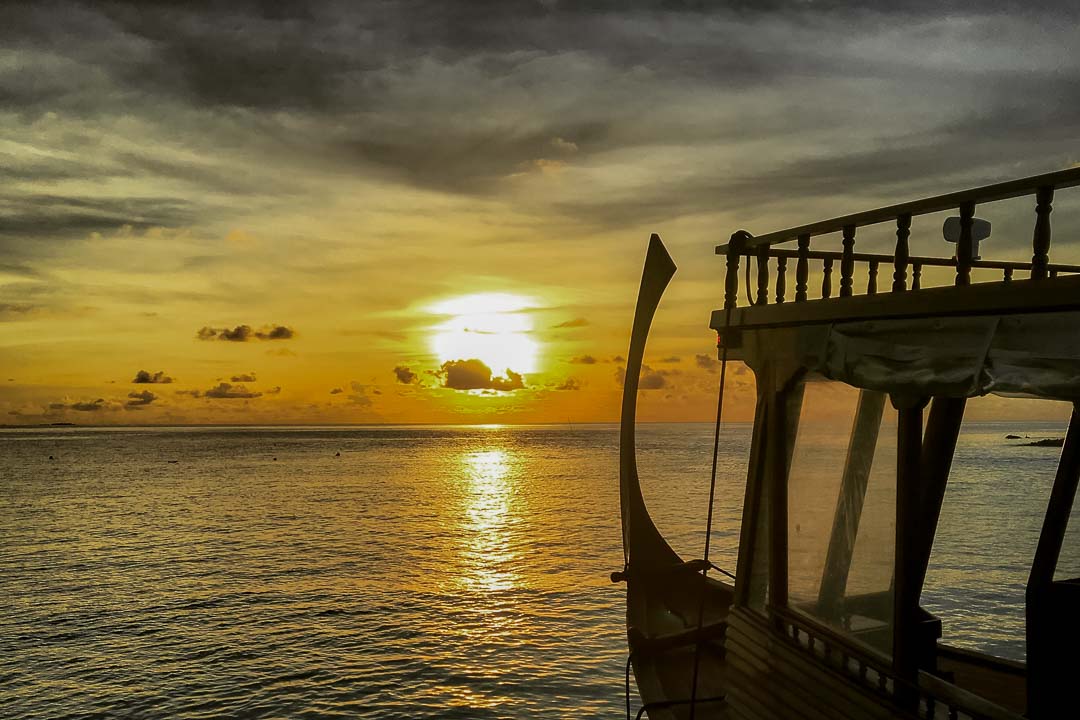 Sunset on the Dolphin Cruise

As I prepared to spend my last few weeks in the Maldives, an exciting opportunity arose to extend my internship! I did not hesitate to agree to this, and now I get to look forward to another two months of working on this beautiful island. I’ve also been given the opportunity to experience working at the MDC at Landaa Giraavaru (Baa Atoll) for a week. So instead of packing my bags and heading home, at the beginning of June I’ll be packing up and jumping on a sea plane for my next Maldives adventure!

Till next time
Tori 😊 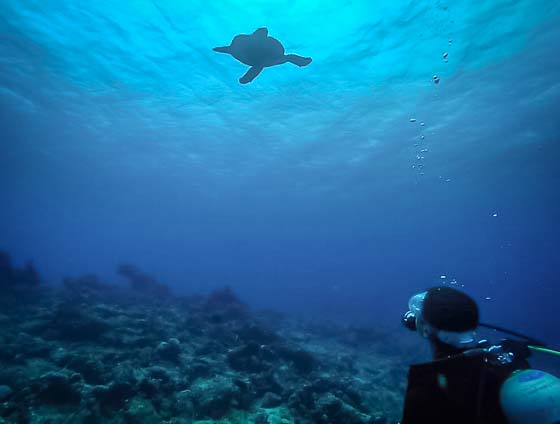 Spotting turtles during a staff dive at Lankan reef 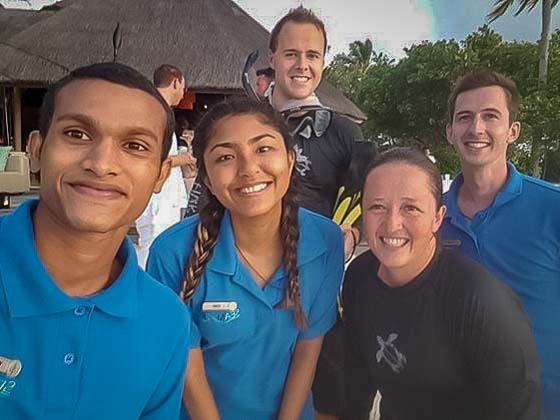 The gang at Kuda Huraa!