During May, 5 new spinner dolphin individuals were added to the database (plus 1 positive re-sighting), bringing the total to 22 individuals in our database. 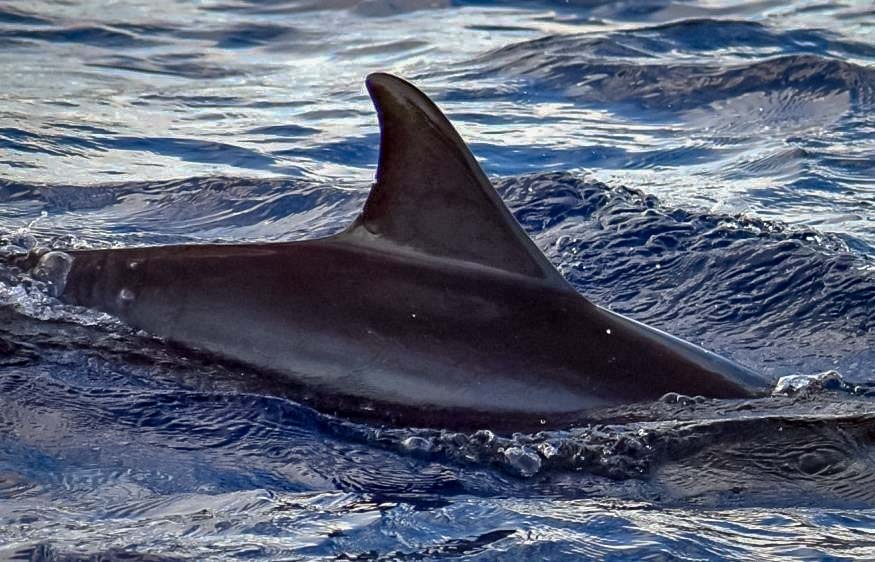 The Four Seasons Apprenticeship Programme 2018 started during April, and we welcomed three new apprentices to our Marine Discovery Centre (Hulaam, Saalim and Saaniu). This month, they helped to renew our touch pool, which is popular with children and adults alike. We released all the existing specimens back into the ocean, changed much of the sand, and collected some new marine organisms (Graffe’s sea cucumber, Holoturia atra, Pincushion sea stars, Hermit crabs and Common sea stars). 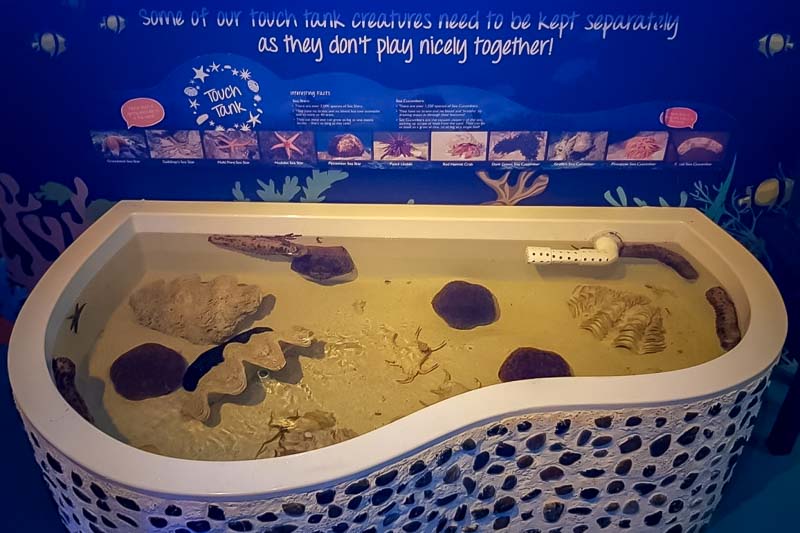 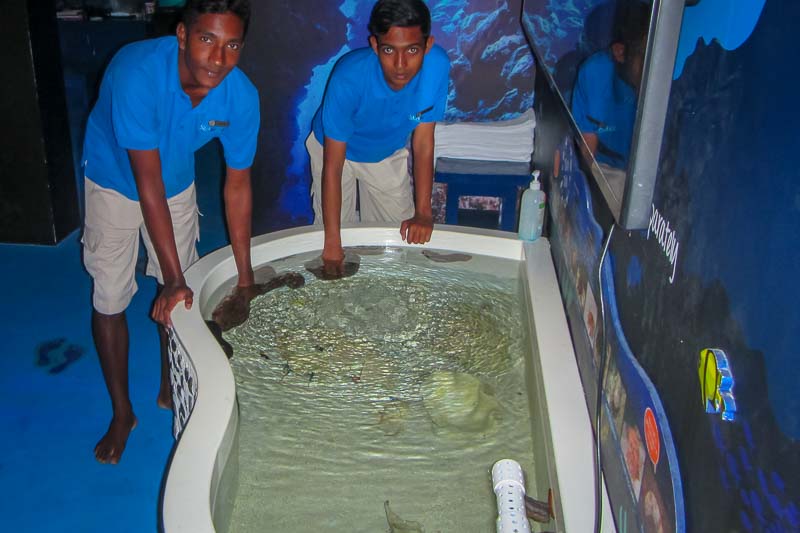 Thanks to submissions from citizen scientists this month, 25 new anemones were recorded and added to our database, which now totals 250 individual anemones across 20 sites (25% of the islands in Baa Atoll).

87% of the anemones recorded were in good health, 13% were nearly bleached and only 0.4% bleached. The most abundant anemone species recorded is Heteractis magnifica with its most common inhabitants the Maldivian Clownfish (Amphiprion nigripes). The second most abundant anemone is Stichodactyla mertensii mostly populated by Clark’s Clownfish (Amphiprion clarkii). We also see the anemones hosting several other species of fish juveniles (Dascyllus trimaculatus, Thalassoma amblycephalum, Thalassoma lunare). The next step will be to understand why on some reefs the anemone cover is very high, and this could perhaps be used as an indicator of overall reef health and biodiversity. 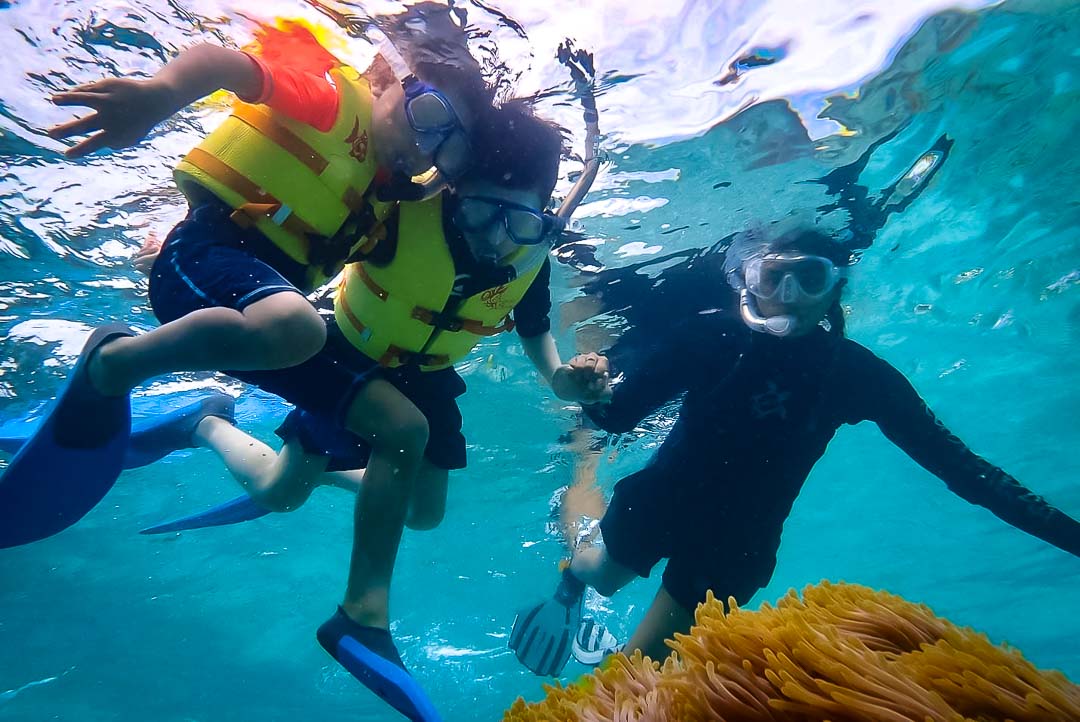 We have sadly lost three of our Maldivian Clownfish breeding pairs due to an infestation of the ciliated protozoan Brooklynella hostilis. Our treatment (with 37% formalin solution) proved ineffective, and the fish died after just one day. In future, we will start to use our captive-bred juveniles to recreate new broodstock. This will be a lengthy process, but we should see better chances of survival as our juveniles are adapted to the captive conditions and seem to be resistant to the Fishlab pathogens.

Biosecurity is a necessary component of live feed production in hatcheries, as contaminated algae can result in a host of issues when used to feed and rear fish. Microbes such as bacteria, fungi, viruses, protozoa, zooplankton, and competitive algae species are all considered biological contaminants, and may impede growth of the desired microalgae species. Bacteria introduced into algae cultures, including pathogenic bacteria, can be transferred to aquacultured and larval specimens when used as a live feed, resulting in disease outbreaks. Grazers, such as rotifers, ciliates and amoebae can be detrimental to production systems and reduce productivity.

In our experiment, we monitored the evolution of contamination in three microalgae cultures of Nanochloropsis at different concentrations. We used 250ml flasks over 42 days, without water changes to check the quality of the culture and the time it takes to be contaminated. We wanted to better understand the mechanisms of the microalgal contamination over time, and attempt to identify the microorganisms likely to be transmitted to our fish larvae tanks. 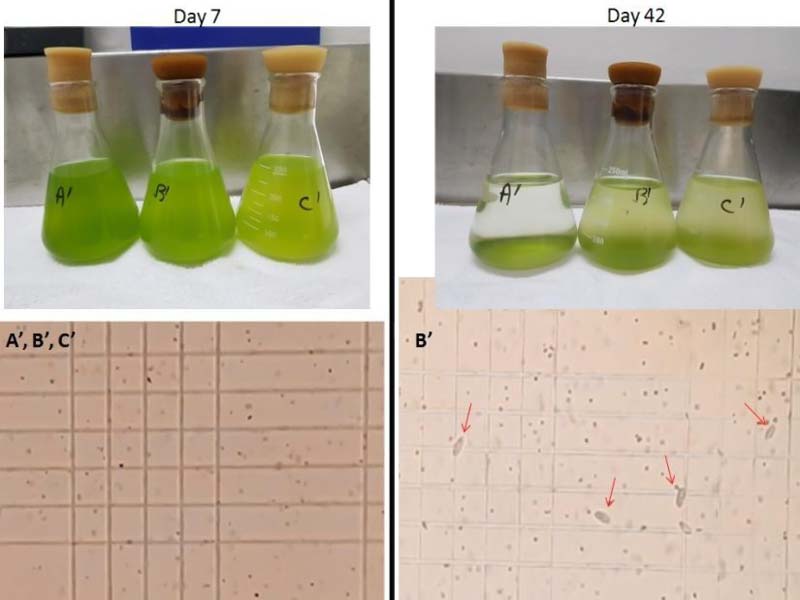 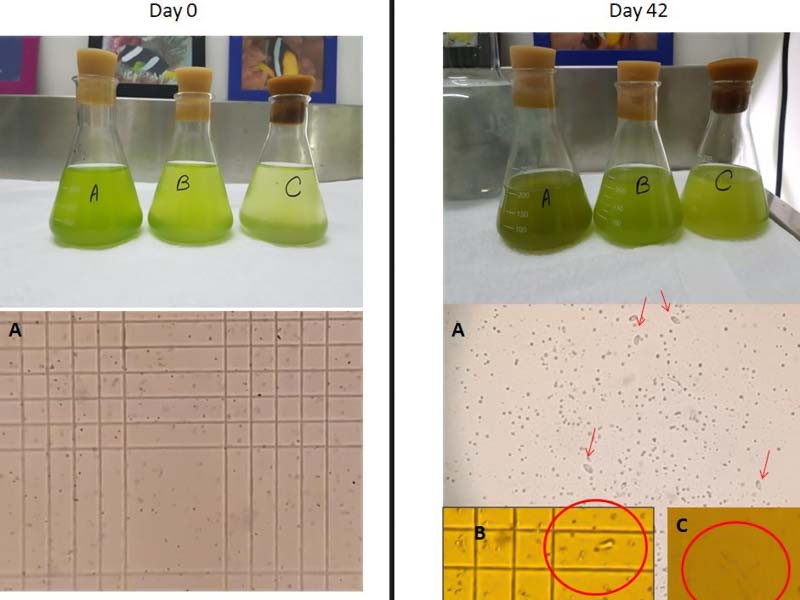 During May, we received over 40 submissions to our turtle ID programme, yielding positive individual identifications for 6 hawksbill turtles and 2 green turtles (plus 15 other good quality re-sightings of existing turtles in our database). You can submit your photos to our Facebook Group. 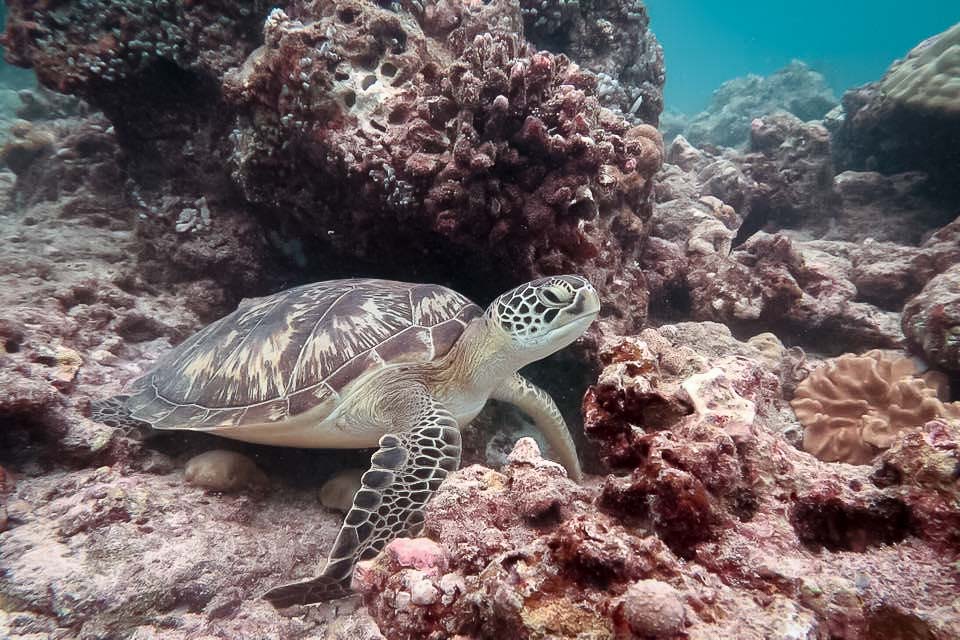 The purpose of this project is to record the growth of the hatchlings on a weekly basis, from the moment they are accepted in our Rehabilitation Centre up to their release. Twice a week, close up pictures of the sides of the head and the carapace are taken in order to record the evolution or transformation of the scales and scutes during growth and assess how they change over time.

A stand for a DSLR camera was specially designed and attached to a plexiglass sheet with a measuring tape glued over it, so that way we can place the turtle at the same spot and distance every time, giving us the length measurement of each individual throughout the year.

At the end of the data collection period (15-18 months), the photograph series will be uploaded in a program called “Photomorph”, which morphs one picture into the next to create a video that will display how the scales and scutes of each individual turtle have evolved over time. This will enable us to pinpoint the developmental stage from when the scales no longer change significantly, so the unique pattern can be used to identify the turtles in the future, should they be encountered in the wild. 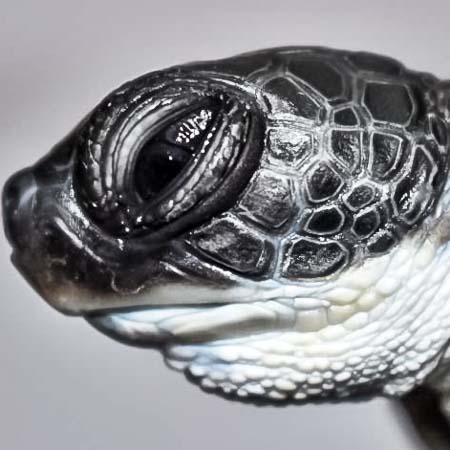 Nest #5 (11 March) – hatched a day earlier than expected, late morning on 5 May. The weather was very cloudy and rainy, and the hatchlings must have thought it was night time! The 76 hatchlings were scooped up and successfully released the next day, outside the atoll to be safe from predators on the beach (crabs, seabirds) and on the reef (reef fish).
One more hatchling was found when the sand softened, and was sent to Kuda Huraa the next day (7 May). There were still eggs remaining in the nest, most of them being yellow/brownish in colour and undeveloped.

Nest #6 (24 March) – 77 hatchlings emerged on 19 May, and we released them at night from the staff beach. There are still some eggs in the nest that have not yet hatched, so we are monitoring regularly.
Some eggs remained unhatched in the nest, but movements were noticed inside the eggs. The nest was dug up on 22 May, and 79 egg cases were found, 77 of which were shells from released turtles, 3 dead hatchlings (2 eaten by crabs). 30 undeveloped eggs didn’t hatch, and one unhatched developed egg was placed in a sand bucket to ‘incubate’ for a longer time. 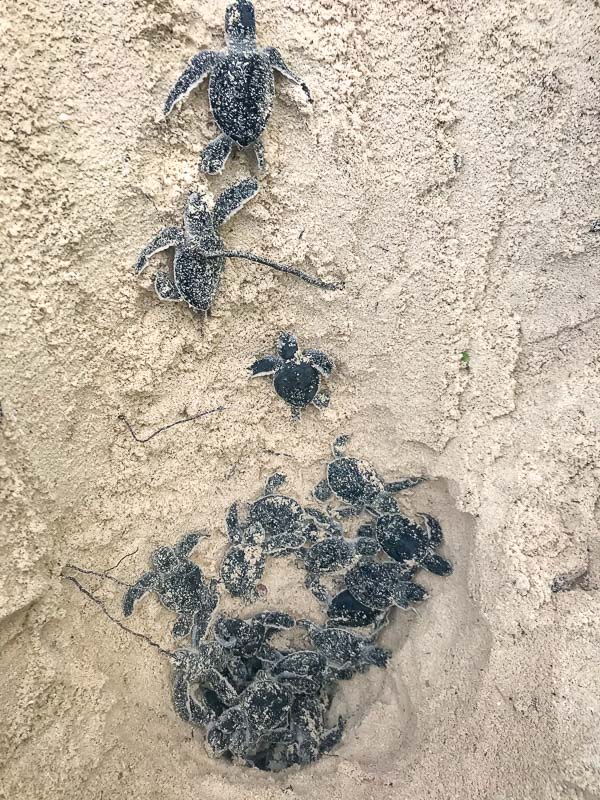 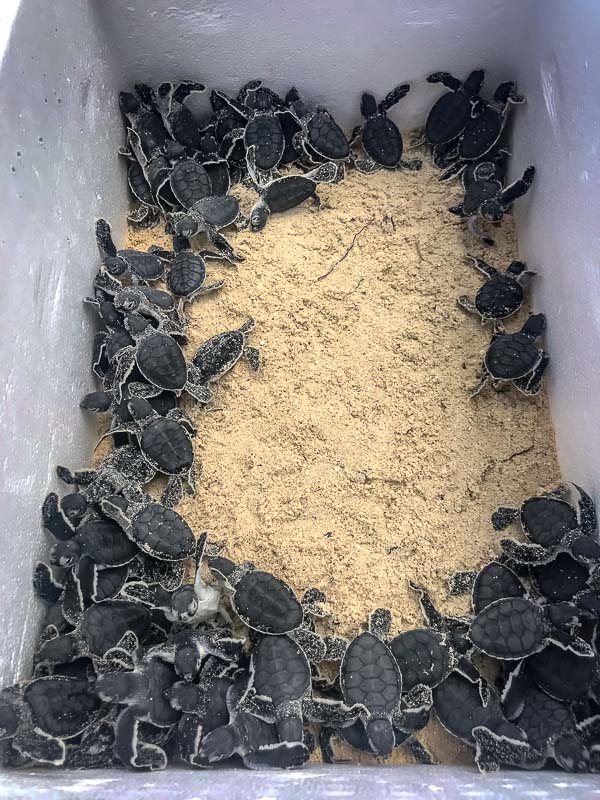 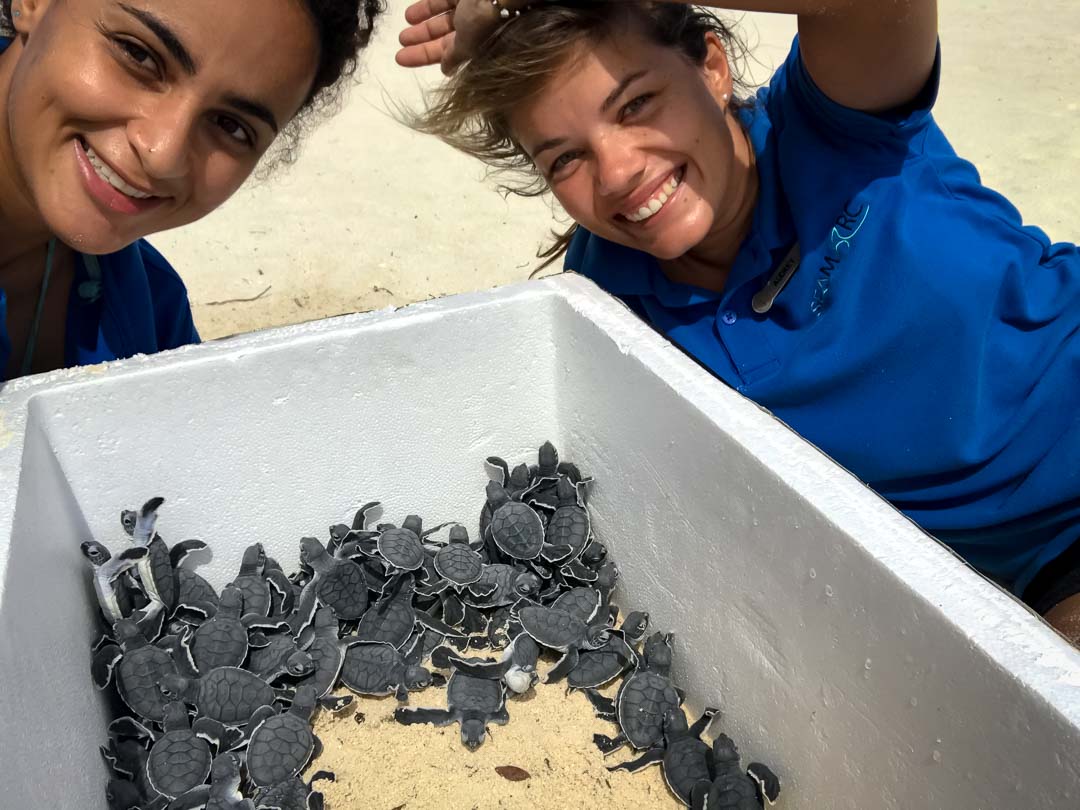 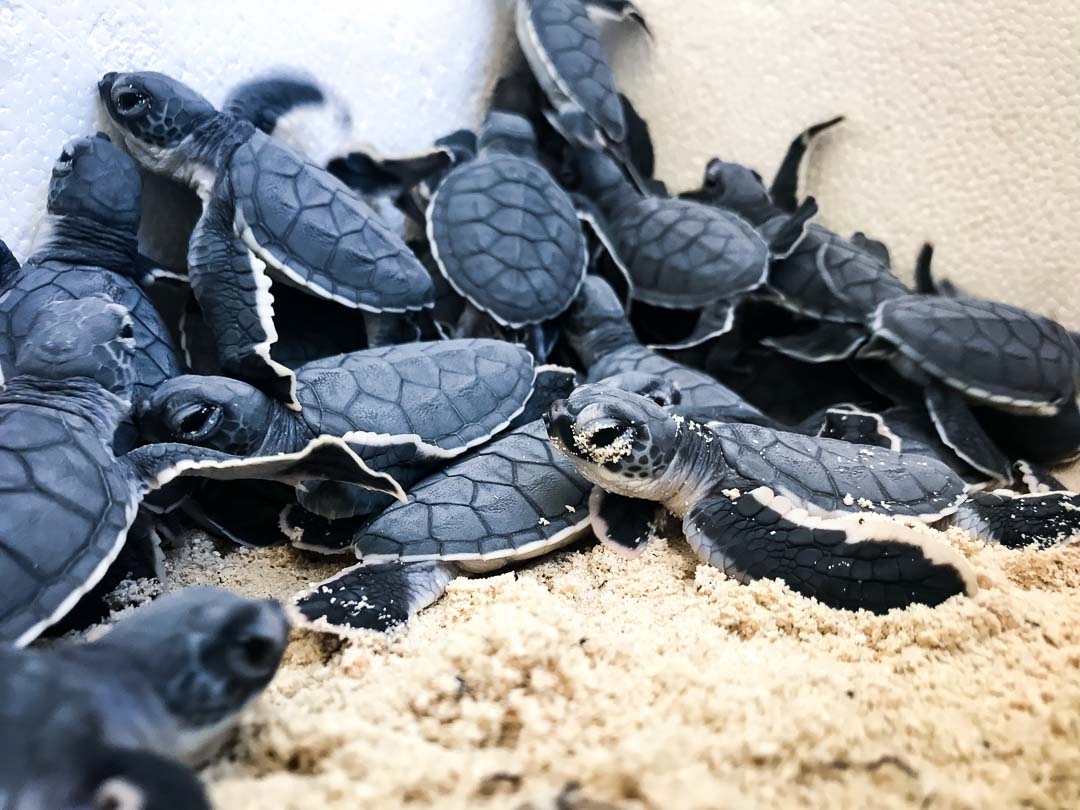 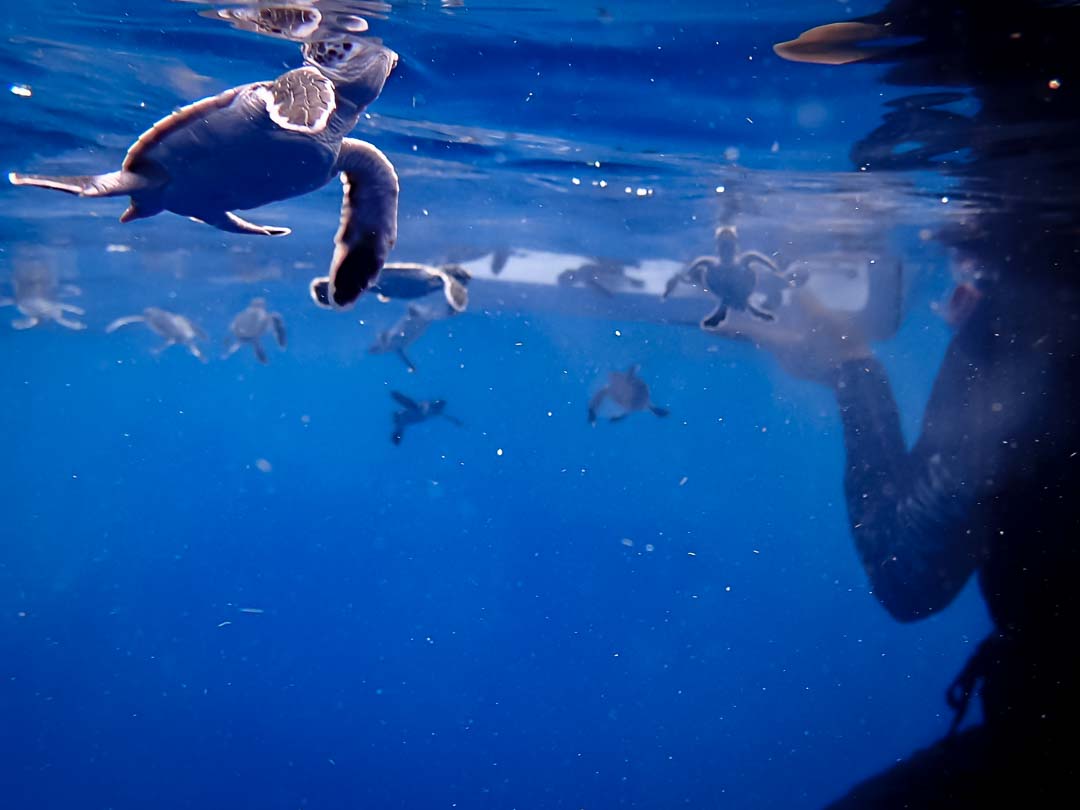 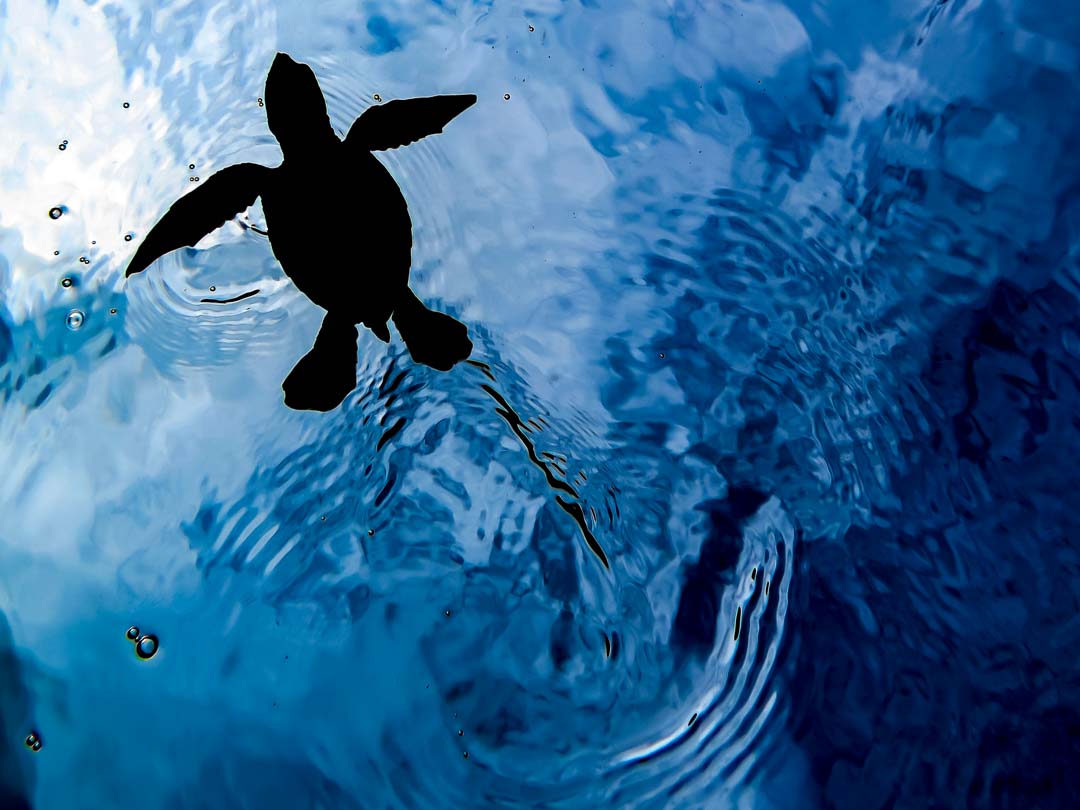