We currently have twelve sea turtles in our Head Start Programme: three Hawksbills (Eretmochelys imbricata) and nine Green (Chelonia mydas) sea turtles, all of them active and growing well.

Tial hatched on 28 June 2015 and was transferred to the Head Start Programme after being found left behind in a nest exhibiting an oddly curved shape. This curvature would have severely decreased his chances of survival and Tial therefore needed additional time in care before being released. At just a month old, Tial’s shell coloration turned a beautiful burnt orange much like a Spanish tile (this is how the turtle received the name Tial), and the coloration remained his distinction throughout care. Upon release, Tial quickly swam down to the reef and began to explore his new home, even seen hiding under large table corals – all healthy behaviours.

After 330 days in our care, Kaya (RB.CM.022) was released at Makunudhoo Reef, N.Malé Atoll. He had arrived at our Centre after being kept as a pet for a short period of time. Throughout his care, he was very active but did require treatment for an eye infection. Kaya was known as a relaxed turtle and would often be found napping on the feeding shelf or amongst the EEDs (environmental enrichment devices). At release, he took several minutes to get his bearings before swimming off towards the reef. 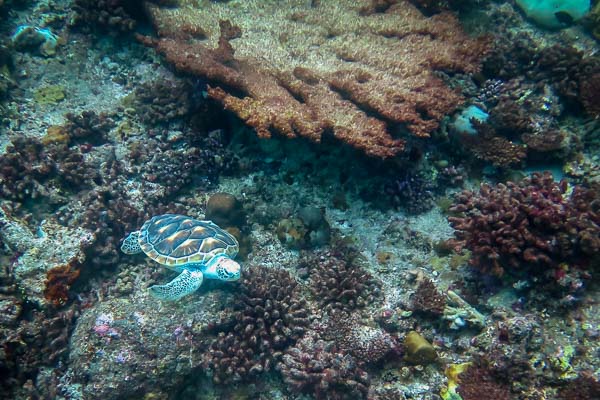 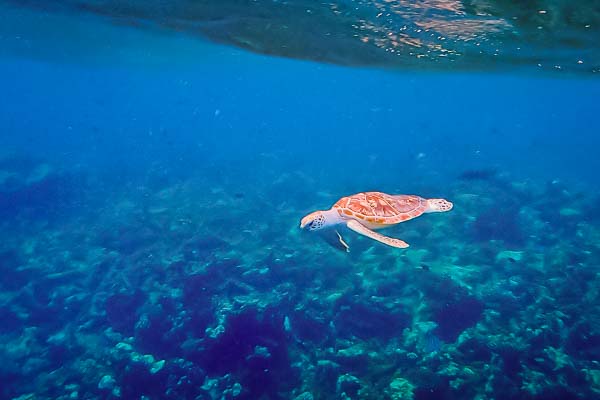 Two Olive Ridley sea turtles were rescued by the Dive Centre during August on the sunset side of Kuda Huraa.

The first turtle was rescued on 18 August after being observed swimming along the beach and having difficulty diving. Upon arrival at our Centre, the turtle was very lethargic, emaciated, suffering from body-wide oedema, dehydrated and had a healed amputation. Additionally, the young male turtle had a thick layer of algae on his shell and many large goose neck barnacles on his plastron, indicating he had been in this poor state for an extended period of time.

Unfortunately, the turtle passed away within an hour of arrival. A necropsy performed the following day revealed he had suffered from Chronic Debilitation Syndrome (CDS), also known as Debilitated Turtle Syndrome (DTS). The turtle had severe atrophy of the muscle and fat, very little natural food in the digestive tract (one shrimp and one small larval fish), a small piece of rubber was found protruding from the cloaca, haemorrhage in the lungs, and bones of the plastron were protruding through the skin; most significant, however, was the severe atrophy of the liver, which resulted in a black liver with a “window” in the middle. The necropsy also confirmed that this turtle was a male.

The second Olive Ridley rescued was found entangled just outside of the Channel site. The juvenile turtle was in good condition with no major injuries or ailments that required medical attention. After documentation and a health check in our large rehabilitation pool, the turtle was released from the beach. 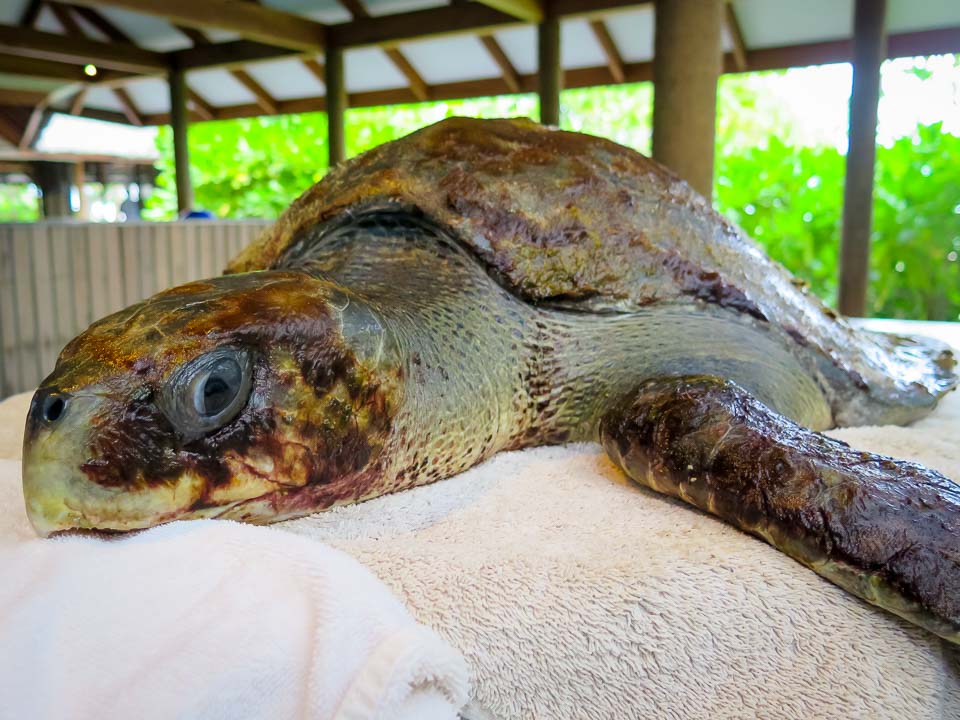 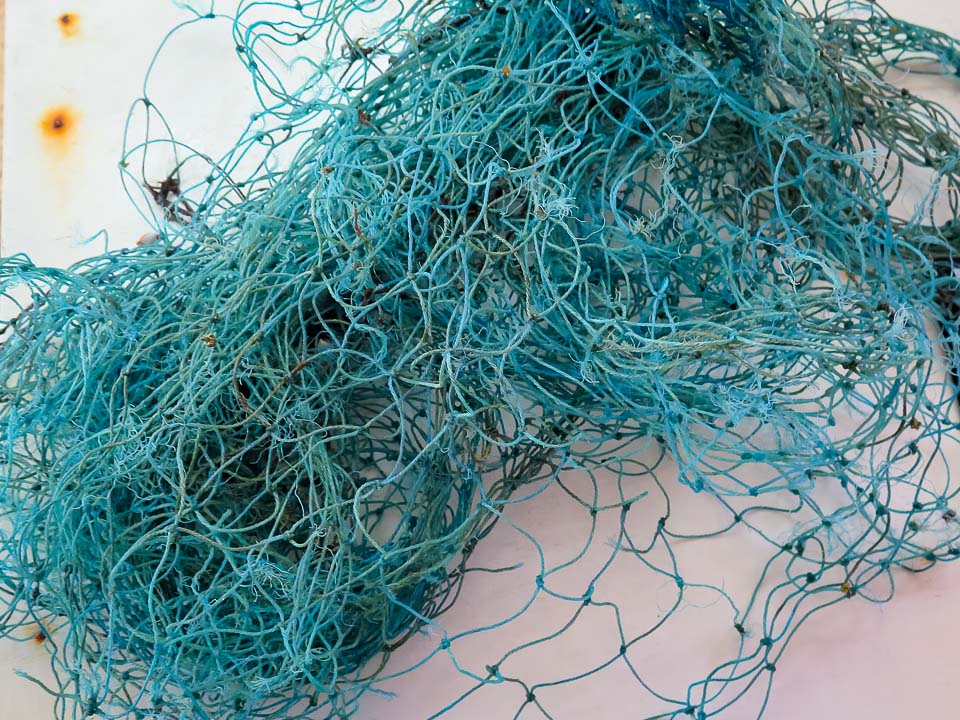 Drifting ghost fishing nets are a hazard for marine life 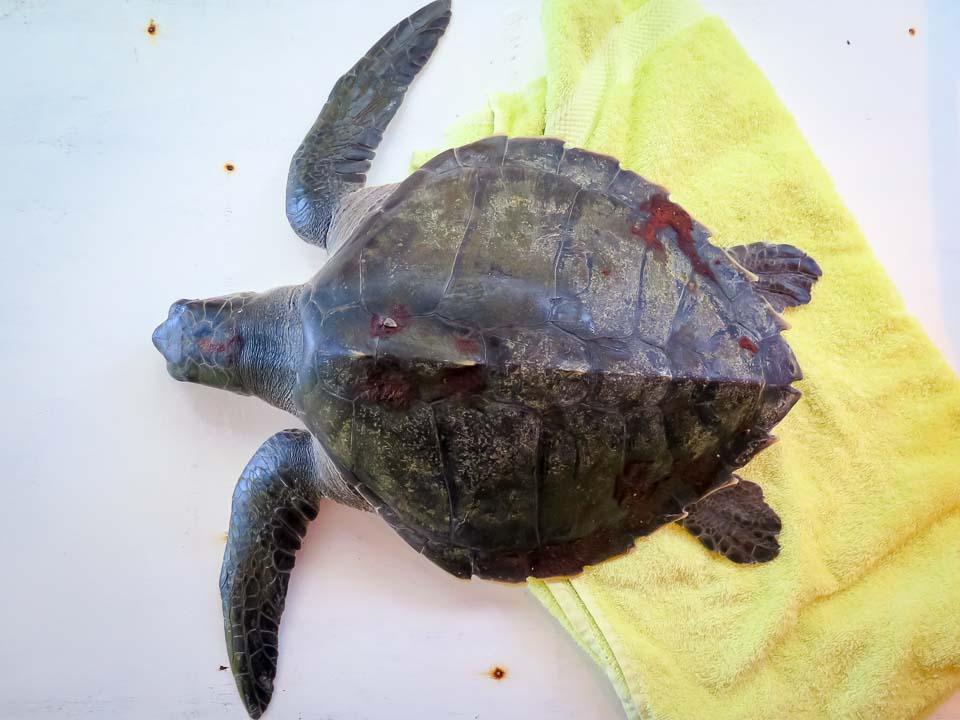 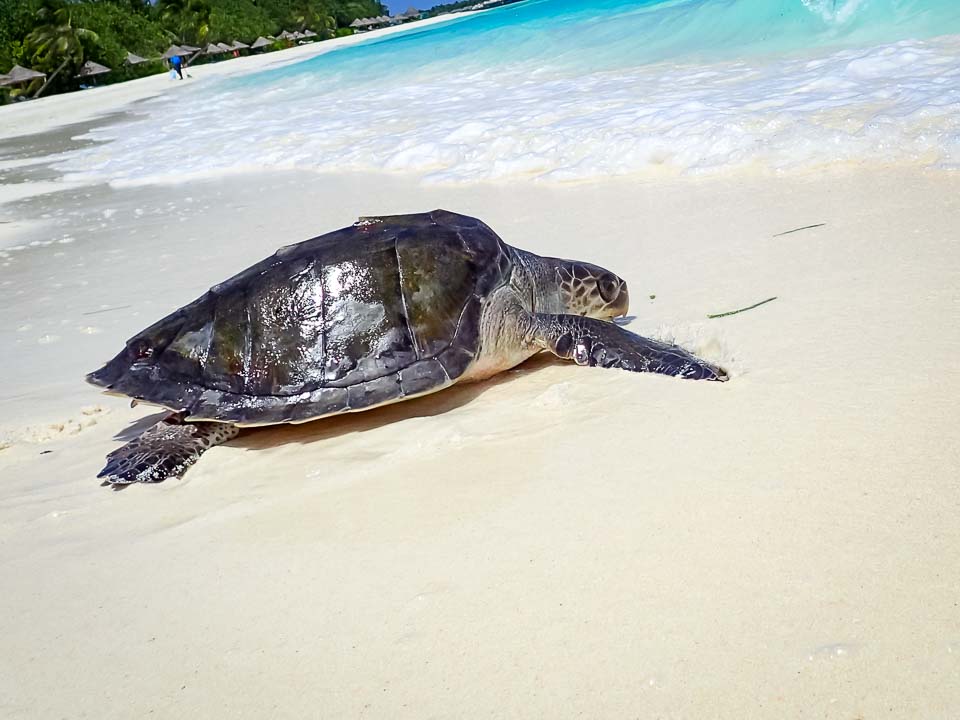 Thanks to the generosity of Four Seasons guests and the friends and family of our staff, we have received several Amazon Wish List donations of medical supplies and environmental enrichment devices (EEDs, turtle ‘toys’ for playing with). These donations are integral to the health of our turtles and help offset the high costs associated with caring for these turtles in such a remote location. The supplies will also help us take care of the severely debilitated turtles we sometimes receive, by providing them with various wound treatments, pedialyte for rehydration and nutrient-rich gruel for tube feeding. 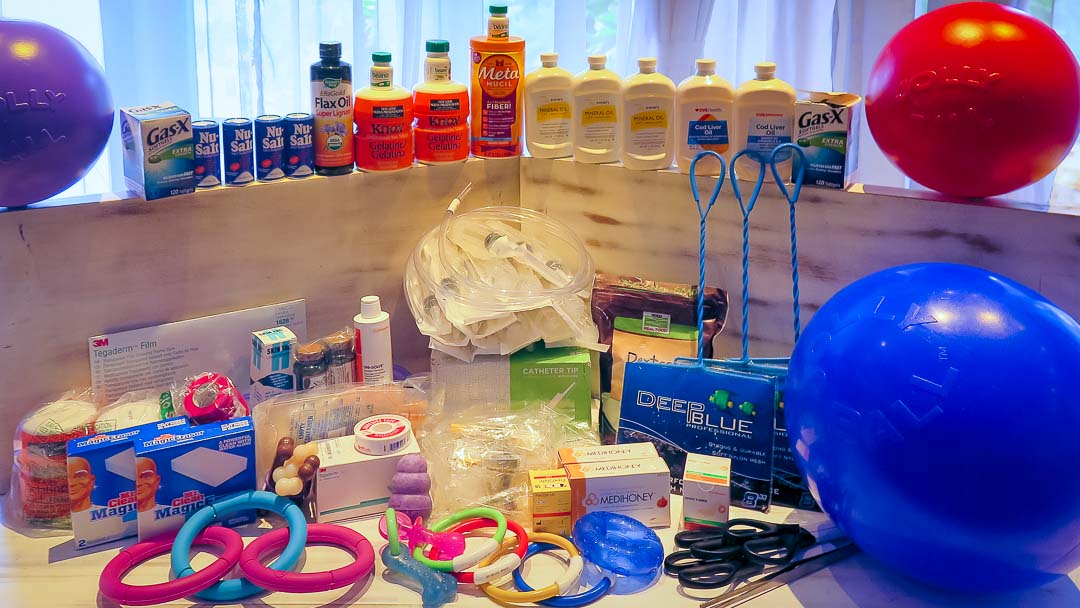 To date, the country-wide Maldives Sea Turtle ID Project (MSTIP) has received photographs of sea turtles from 276 sites located across 16 different Maldivian atolls.  Of the two species of sea turtle in the database – Hawksbill (Eretmochelys imbricata) and Green (Chelonia mydas) – there are 3323 recorded sightings, representing 922 uniquely identifiable individuals (809 Hawksbills and 113 Greens). Additionally, for referencing and possible future identification we have 263 turtles in the ‘Left Profile Only’ database, plus 412 turtles of ‘Insufficient Quality’. (The single Loggerhead turtle sighting is on record, but the low image quality cannot yield a positive ID of the individual).

During August 2016, there were a total of 146 submissions received and processed. 118 sightings of individuals were entered into the database, with 30 turtles being positively identified as new individuals. 28 submissions were stored for later comparisons (due to there being only 1 side of the facial profile, or low quality photos), and 19 new sites across the country were added. A big thank you to all 820 members of our Facebook group (Maldives Turtle ID), in particular our top three contributors for August:

One of the sighted turtles (EI0785 at Makunudhoo Reef) was found to have only a single profile photo but two separate database entries, so has been moved to the ‘Left Profile Only’ database. This kind of result serves to validate the long-term efforts of our turtle biologists in their extensive database re-formatting work to create a more accurate dataset over the previous year.

Hawksbill turtles Bear (EI0377) and Fudge (EI0787), both residing at Makunudhoo Reef, were seen a total of three times each this month and are the top sighted turtles. Bear is a long established resident of Makunudhoo Reef, being seen regularly since January 2013, whereas Fudge has joined the reef this month as one of the newly identified turtles.

A new site in Raa Atoll has proven to be very prolific, with a high population of individuals. Of the 17 submissions received from this site, all proved to be newly identified Hawksbill juveniles! It will be interesting to see if additional sightings in the coming months result in the positive identification of more individuals, or if these same turtles start to be re-sighted.

Submissions of Green sea turtles are less frequent as they tend to be found grazing in seagrass beds. Green turtles, however, are frequently sighted during morning dives on the eastern side of N.Malé Atoll. Here, there are large seagrass beds and Green turtles are often seen resting in nearby rock shelves and caves. Of the three Green sea turtle submissions processed in August, two were archived for future reference and the third submission resulted in the positive identification of newly named Turtie McTurtface (CM0097), a juvenile turtle with a straight carapace length of 60cm. This turtle was sighted at a newly added site (Amaa Cave at Lankan Reef, N.Malé Atoll) but had previously only been sighted in 2014 at Aquarium site. Unlike Hawksbills, Green turtles tend to have a much larger home range and do not stay at one particular reef site but seem to move between their foraging grounds and surrounding reefs where they are seen resting. 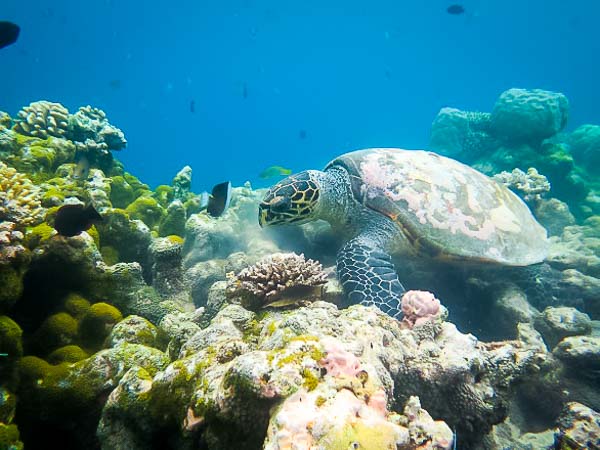 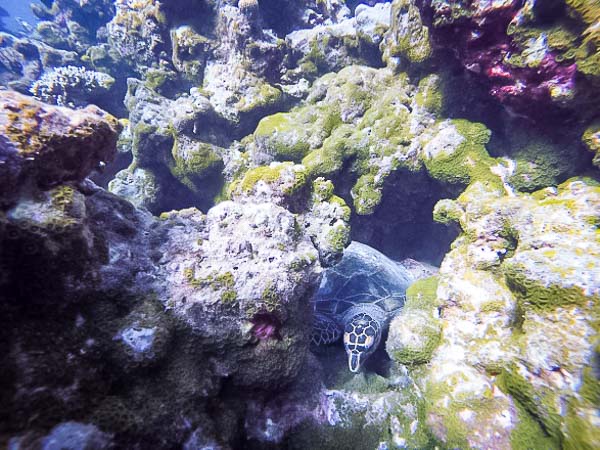 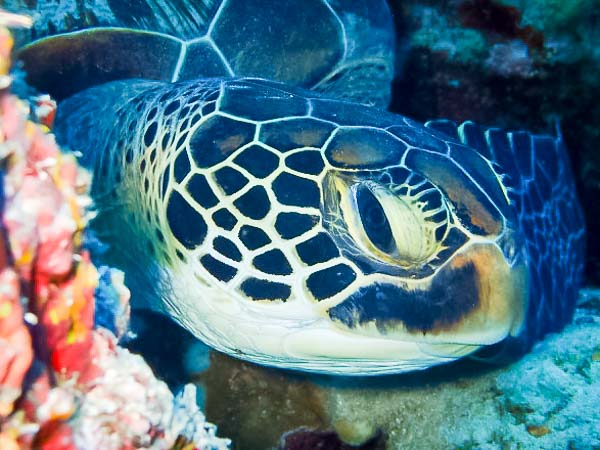 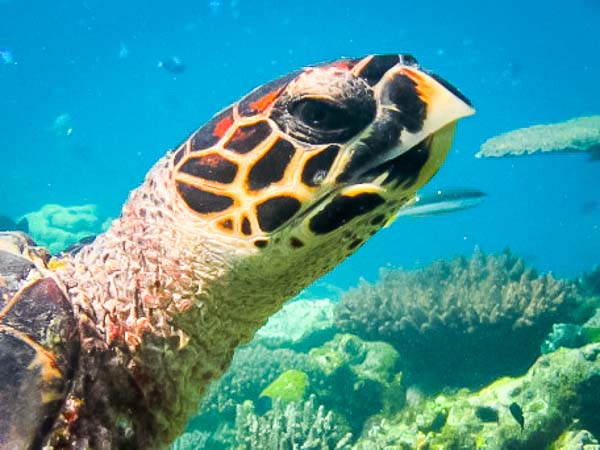 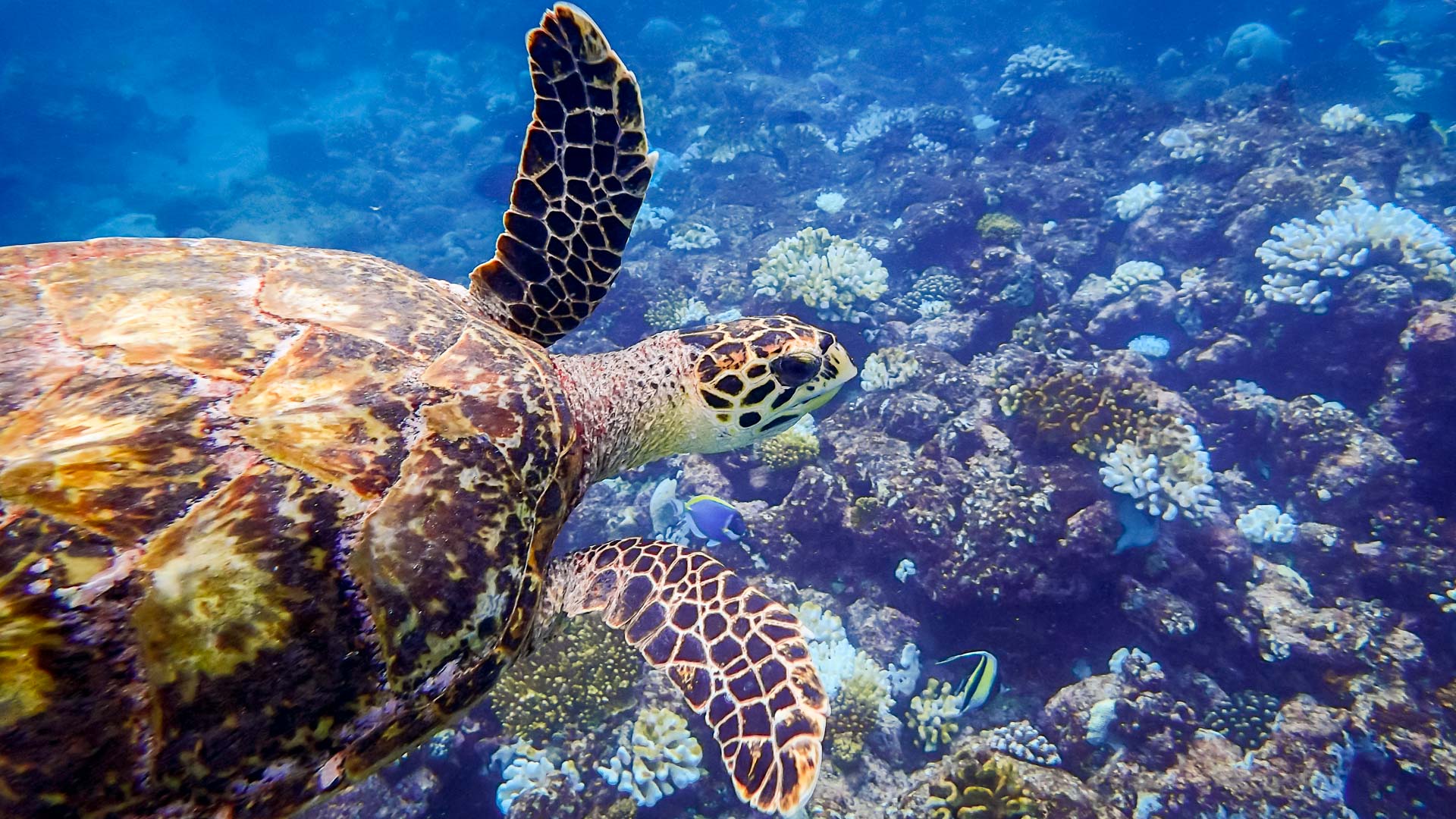