On 23 June a pair of our Clark’s Anemonefish (Amphiprion clarkii) spawned successfully in the fish lab. Following a 6-day incubation period, the eggs hatched on the evening of 29 June, and the larvae appeared to be healthy. Since transferring the larvae into a rearing tank, Mark (our Seamarc eco-volunteer) has been examining individuals each day to follow their growth pattern and watch as they develop.

The larvae are developing well, currently measuring 6mm in length and feeding on both rotifers and newly hatched Artemia. Each day, relatively positive signs of growth in the fish have been noticed, with good body shape, tail formation, eye development and colour pigmentation. The next stage in this project is to witness the larvae go through metamorphosis at around day 10 – 14, and we will see the larvae transform into juvenile fish. 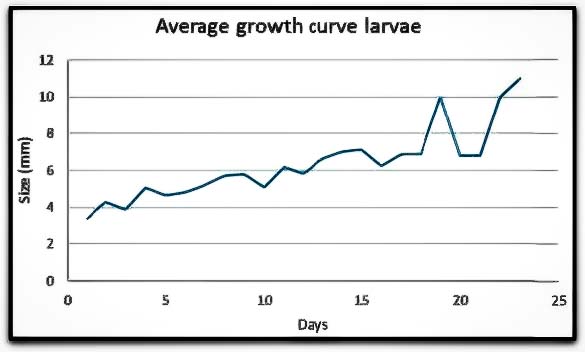 Carla our new intern will be working at our Centre for four months, to complete her aquaculture degree by reviewing our Fish Lab breeding project (protocols, facilities, hygiene and prophylaxis). We aim to improve the larval breeding performance of clownfish, and find ways to reduce the larval mortality rate during their first days of life. In nature, only a tiny proportion of fish hatchlings survive, but in the lab we can ensure greater survival rates by eliminating predation and increasing the larvae’s food capture potential.

Daily microscopic observations of larval development – Five larvae are observed under a microscope (3 alive and 2 floating). Eleven factors are monitored, such as food intake, growth, deformities and bacterial attacks. Some of these factors could explain the causes of larval mortality. Each larva is photographed for consistency and the results reported in a spreadsheet for later analysis.

Water Monitoring – Tank water quality is important for larval survival, and so each morning we are recording the acidity (pH), hardness/alkalinity (GH/KH) and nitrite/nitrate (NO3 and NO2). High nitrite levels are particularly toxic for fish (caused by nitrogen waste, food intake and organic compounds) and we avoid these problems by cycling in fresh filtered sea water from the lagoon. 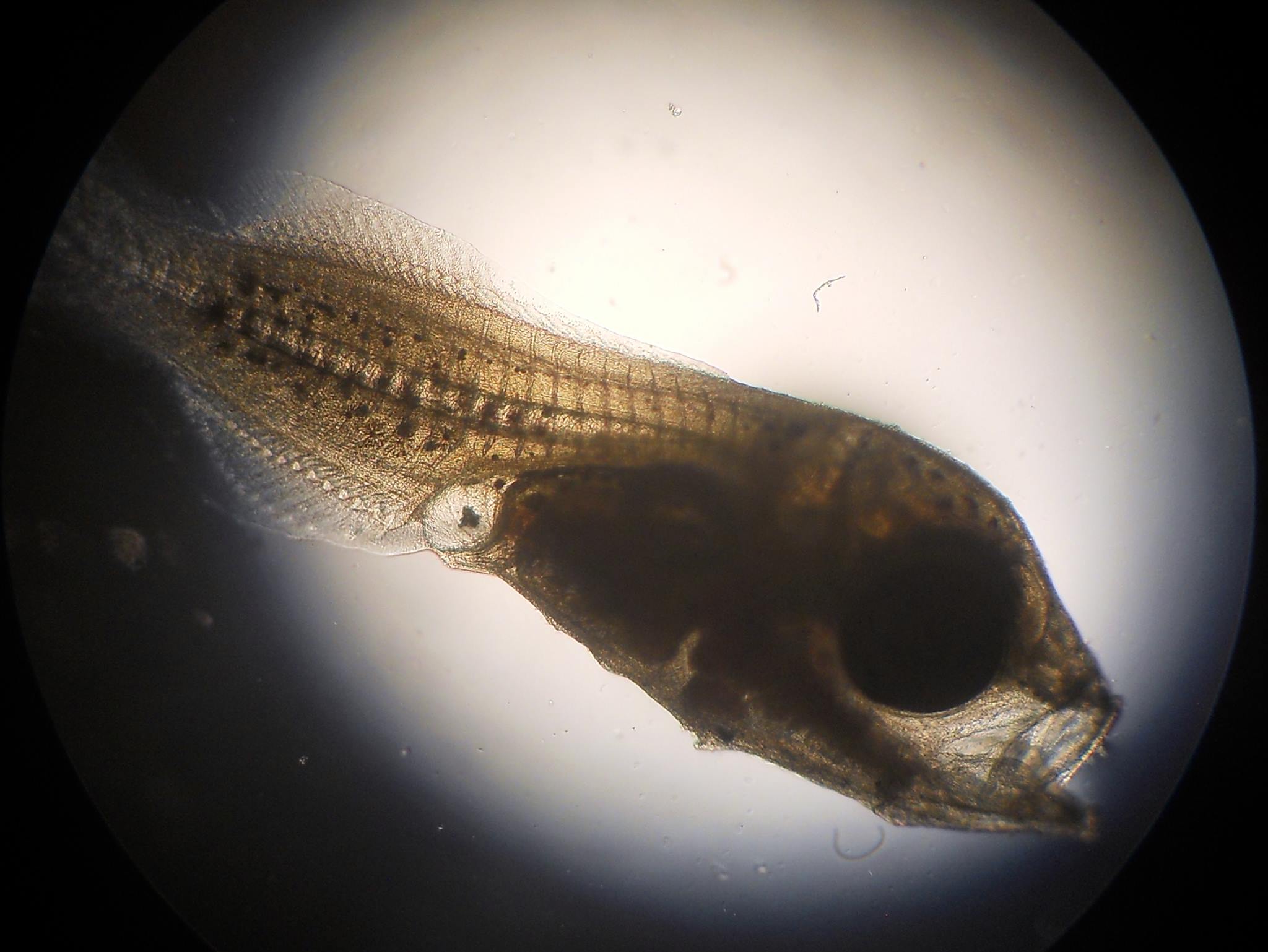 During April, we have started to experiment with Baited Remote Underwater Videos (BRUVs). This is to get a greater idea of the different fish species around the island, and ultimately we hope to use them to estimate shark populations.

The equipment simply consists of a GoPro camera attached to an old coral frame. A bait box is set up at a distance from the camera, containing leftover fish/lobster. The highlight was a moray eel that discovered the bait and wriggled his way inside the box for his dinner! Several adaptations have been made to the set up since the test runs, such as different placement of the camera, more holes in the bait box and different locations to reduce disturbance. Further work will be done on logistics, such as where the BRUVs will be placed, and how many recordings will be done at each site.

During May, we expanded our BRUV project with the help of our fellow marine biologist and long-term collaborator Frederic Ducarme. We are now experimenting using Crown Of Thorns starfish (COT) as bait, to discover if any local predators will eat this pest starfish that can cause significant damage to coral reefs. Frederic plans to write a scientific article about COTs predators in the Indo-Pacific region, as this has not yet been studied in the Maldives. Therefore it’s an important and exciting area of focus, with much room for continuation and adaption.

Our experiments will include 30 repetitions of each variable, at different times during the day:

We have chosen a spot in the Channel area, 2m deep, easily accessible from the beach, with low snorkelling traffic, and close to reef flats with a good variety of fish and rays/sharks.

The trials are already producing some results, with various fish species eating the COT bait:

Throughout June, the BRUV research project has been mostly focusing on the possible predators of dead Crown of Thorns starfish (COTS), both placed upside-down and right side up. So far, predation levels are much higher for the COTS placed upside down, indicating scavenging-type behaviour. The main consumers so far have been Balistoides viridescens, Balistapus undulatus and Pseudobalistes flavimarginatus, and on most occasions more than half the bait is consumed during the time period. Our reef resident Hawksbill turtle in the Channel area has also been seen taking a taster bite of the COTS. 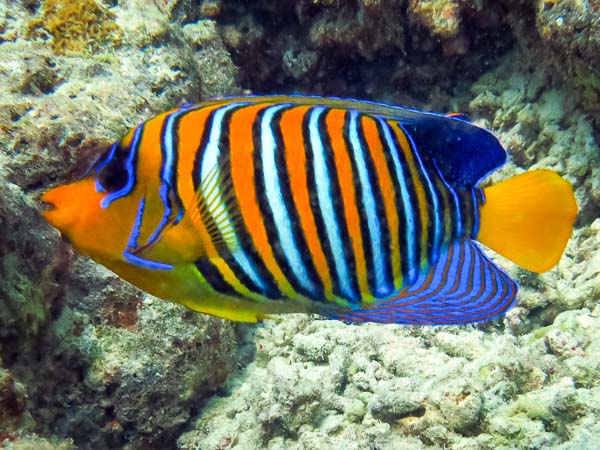 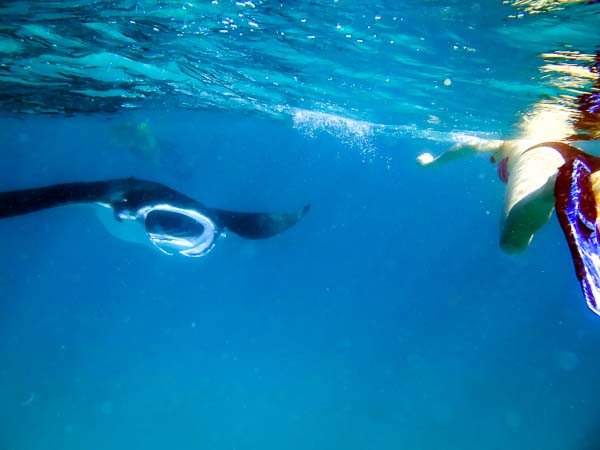 During the last few months, we have had some excellent sightings of various species of megafauna including:

Spinner dolphins were sighted in pods ranging from 3 to 150 individuals plus calves (with over 50+ individuals on many occasions). The smaller pods showed avoidance behaviour and did not approach the boat, whereas those in larger pods were very active, approaching us to bow-ride and enjoying jumping, spinning and porpoising.

The much rarer Risso’s dolphins were sighted on several cruises, in pods containing approximately 12 to 100 individuals. They were observed for up to 45 minutes, paying little attention to the boat, and busily tail-slapping, jumping, rushing other individuals and one dolphin even stopped still in the water, holding its tail vertically in the air for at least 10 seconds.
Risso’s dolphins have a unique physical appearance, with numerous white linear scars and peculiar markings stretching over their bodies. It is thought these are made by squid (their major prey item) and also by other Risso’s dolphins during social interactions such as playing or fighting. The amount of white scarring generally increases with age and older individuals can have a notably white appearance because of this.

We also observed a pod of Short-finned Pilot whales recently, not commonly seen as they are often further away from the shore in deeper waters. Pilot whales also feed predominantly on squid, and the waters on the outside of the atoll give them access to deeper more productive foraging areas.

One of our recent sunset dolphin cruises from Kuda Huraa was lucky enough to encounter an unusual sight; a huge pod of False Killer Whales travelling close to the resort. False Killer Whales (Pseudorca crassidens) despite their name are not related to the more well-known Killer Whale (Orca) nor are they in fact whales. Growing up to 6m in length and weighing over 2000 kilos, they are the third largest member of the oceanic dolphin family. Rarely seen in these waters, they are thought to frequent deeper waters across large tropical and sub-tropical areas. However, when the pods encounter boats, False Killer Whales are often very playful and enjoy bow-riding. Luckily for us this pod of around 50 individuals did exactly that, leading to a fantastic encounter with lots of photo opportunities for our guests. An incredible, once in a lifetime viewing of these beautiful creatures! 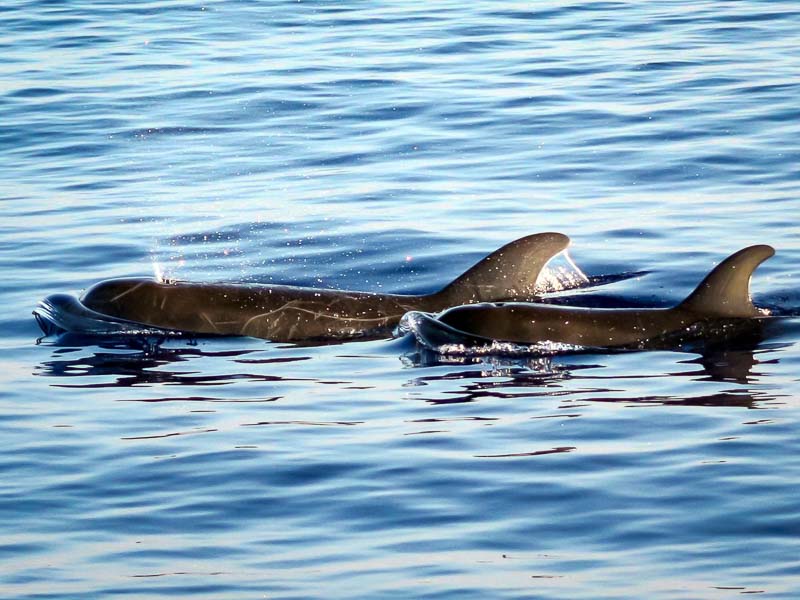 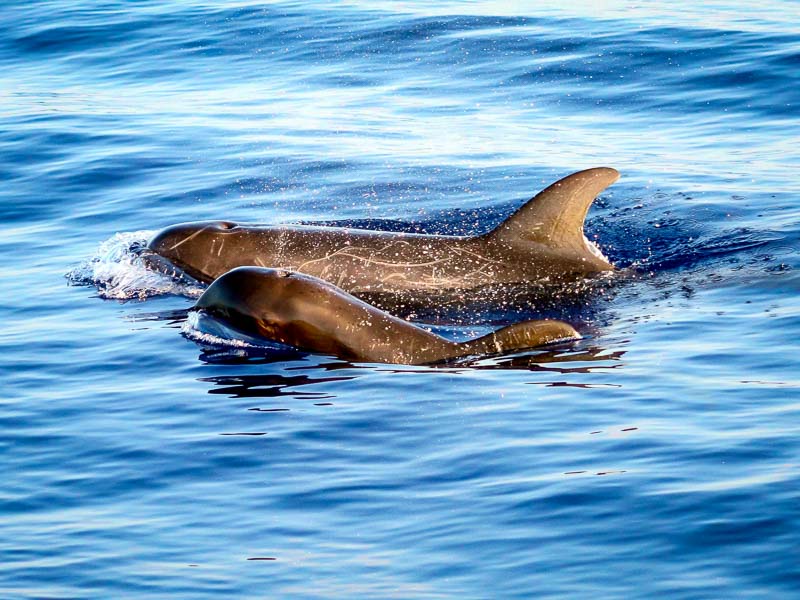 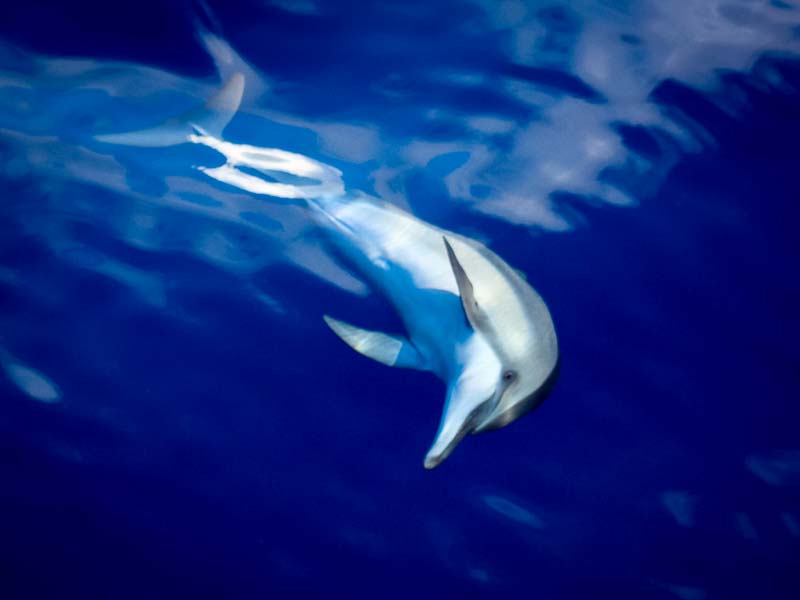 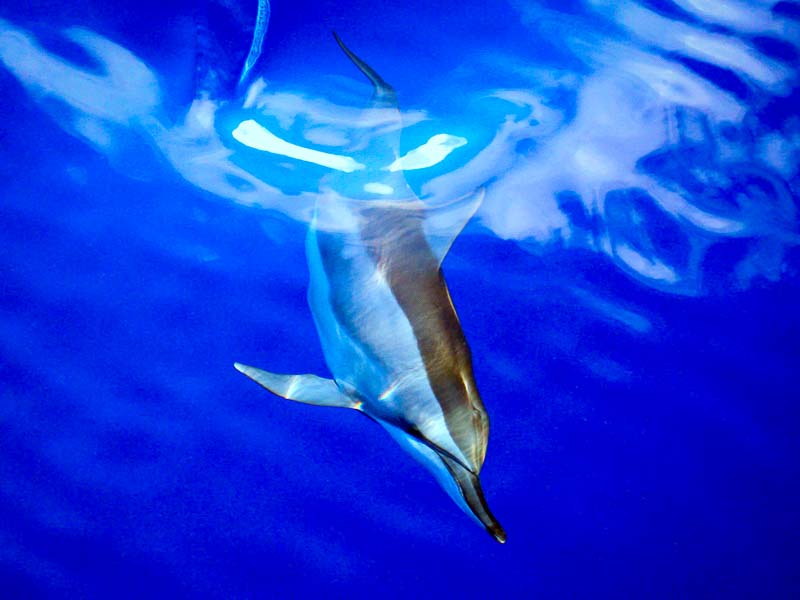 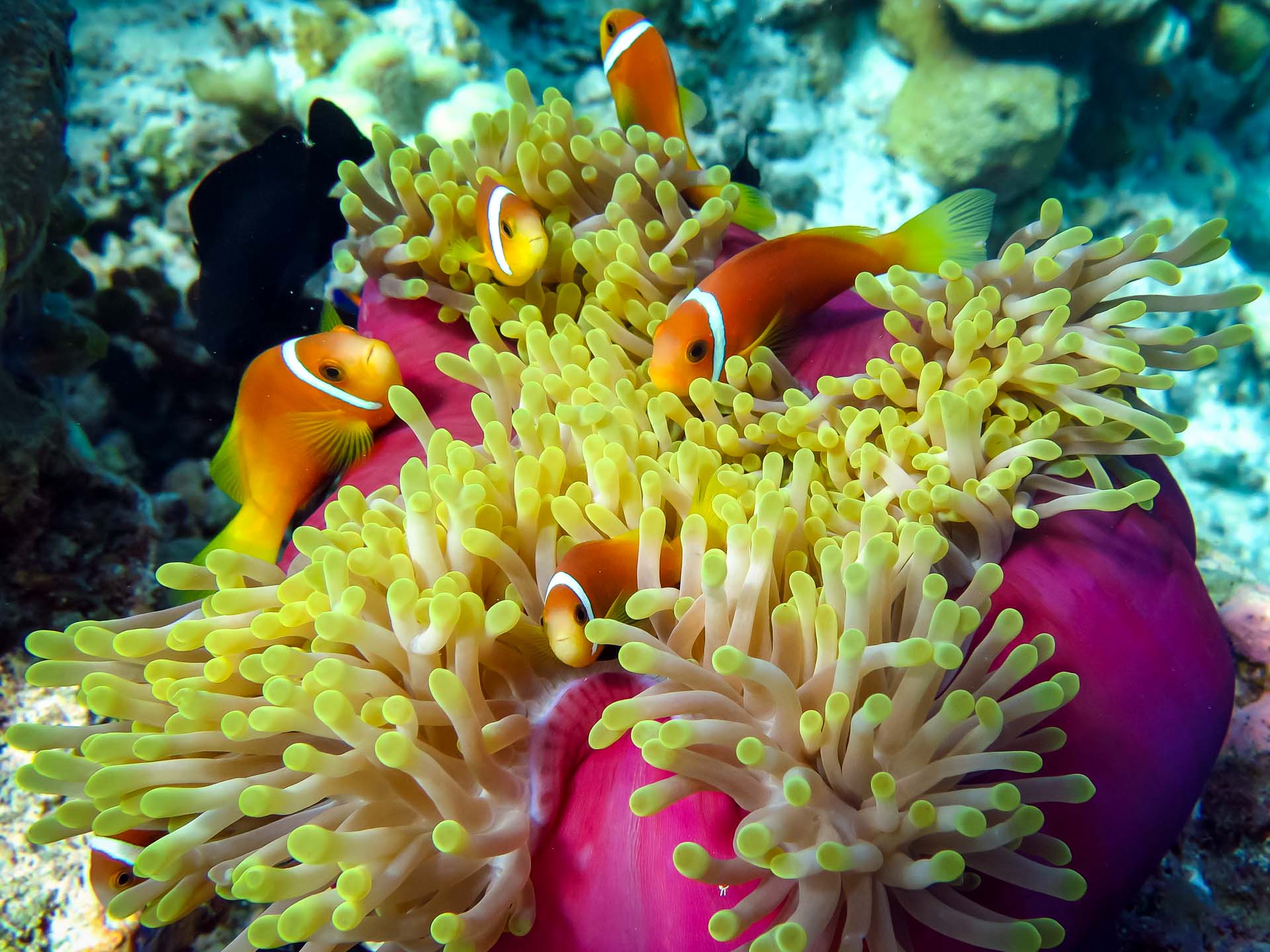