27 new coral frames were transplanted during February 2016, and deployed at our Blu and Coral Beach sites. We now have 2850 coral frames around the island, covering ≈ 5.740 m2. And a total of 368 frames were monitored (maintained, photographed) this month, mainly at the Dive and Water Villa Arc sites.

The Dive site is a deep site and highly frequented, as a lot of guests use this site for dive activities. Some mechanical damage has been observed, a mixture of damage from fins and from natural fish predation. The benefit of this deep site is that very few frames were impacted by coral bleaching. Most of the frames are growing very nicely, such as LG0469 (transplanted in 2009), LG1679 (transplanted in 2013), and LG2381 (transplanted in 2014).

The Water Villas Arc site coral frames were badly affected by bleaching after the abnormally warm temperatures of April 2015. We started a widespread re-transplantation during July, and we are now seeing that most coral fragments are growing very nicely (Acropora tenuis coral fragments are showing a high level of mortality and might need to be replaced).

The Al Barakat site on the southern side of Landaa Giraavaru is suffering from sand accretion, with approximately 50 frames becoming half-buried (e.g.: LG0462 and LG0648). We have been busily relocating about 30 of the affected frames using air-lift bags, and still have some more work to complete. 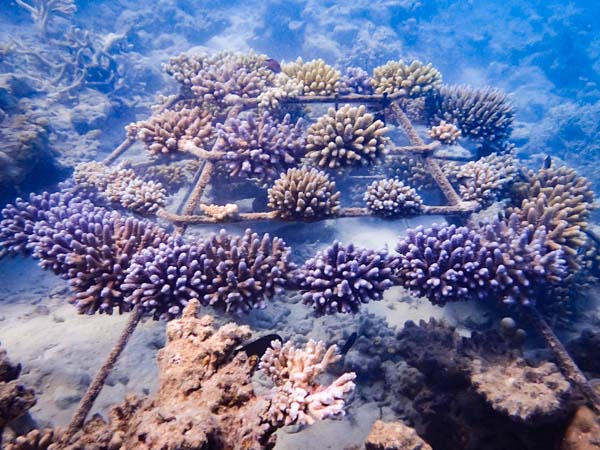 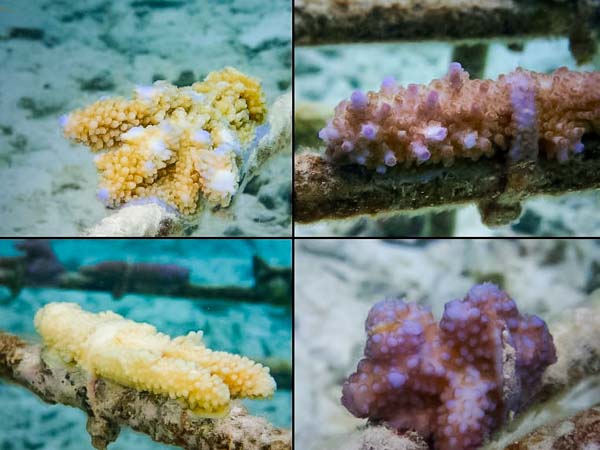 17 coral frames were transplanted during the month of February, and deployed at the Starfish and House Reef sites. We have also been busy re-transplanting in this area, with 464 new coral fragments collected from donor colonies. Species are chosen based on availability and previous successes (e.g.: Acropora humilis, A. digitifera, A. tenuis). By contrast, Acropora valida, for example, is fragile and not commonly transplanted with guests, despite giving excellent results (attaches well, grows quickly, good survival rate, widespread on the House Reef). Our policy is to collect fragments only from healthy, mature donor colonies (>20cm in diameter), with no more than six fragments being removed from the outside of a colony (to limit chances of disease and algal smothering).

A total of 270 frames were monitored this month, across the Starfish, Channel and Water Bungalows sites. The seasonally warmer months of March-May are predicted to be high this year around the globe, due to the 2015-16 El Niño, with sustained increases in water temperature expected, followed by a widespread coral bleaching event. We will be deploying our new coral frames in the deeper waters of the House Reef to reduce potential mortality of the new coral fragments.

Frames in the Channel site are very healthy, with good survivability and excellent recovery from environmental degradation. This has led to a noticeable increase in fauna, especially porcupine and box fish species which find refuge under our well-established frames.

A total of 449 Crown-of-Thorns Starfish (COTS) were removed around Kuda Huraa in February. Most were collected from the House Reef, with an average diameter of 45cm. On 27 February, we teamed up with our colleagues in Dive/Recreation for a large removal effort from volunteer snorkelers and divers. We collected an impressive 273 COTS from the House Reef in just one hour, from depths ranging from 2-15 meters. Both wild reef colonies and our coral frames have been affected by COTS predation, and considerable re-transplantation work is needed to repair the scarring. 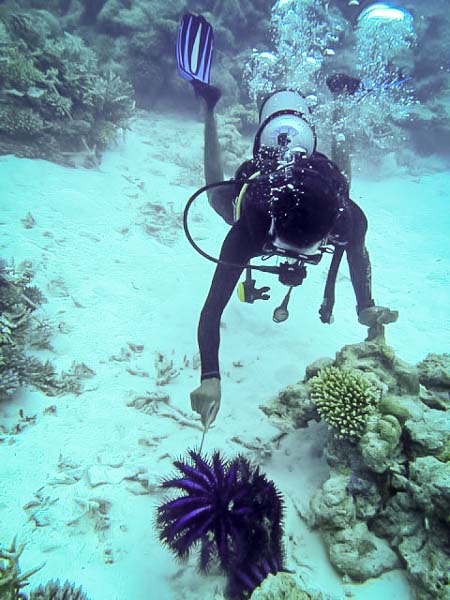 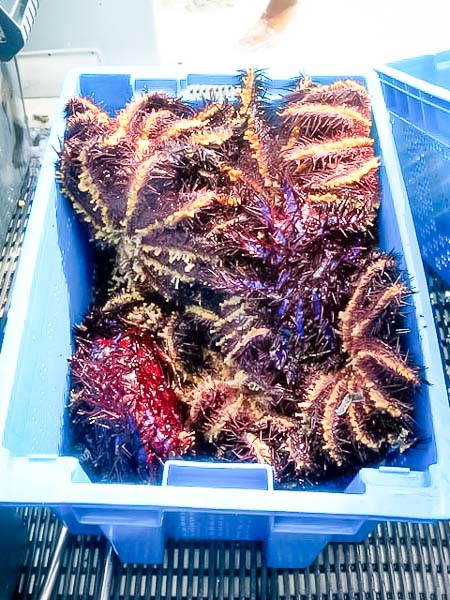 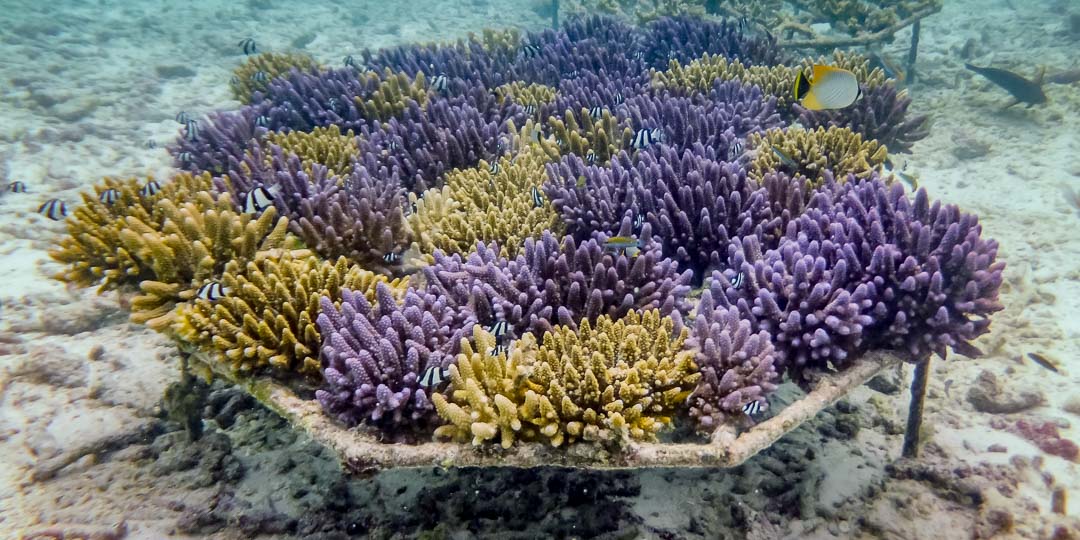 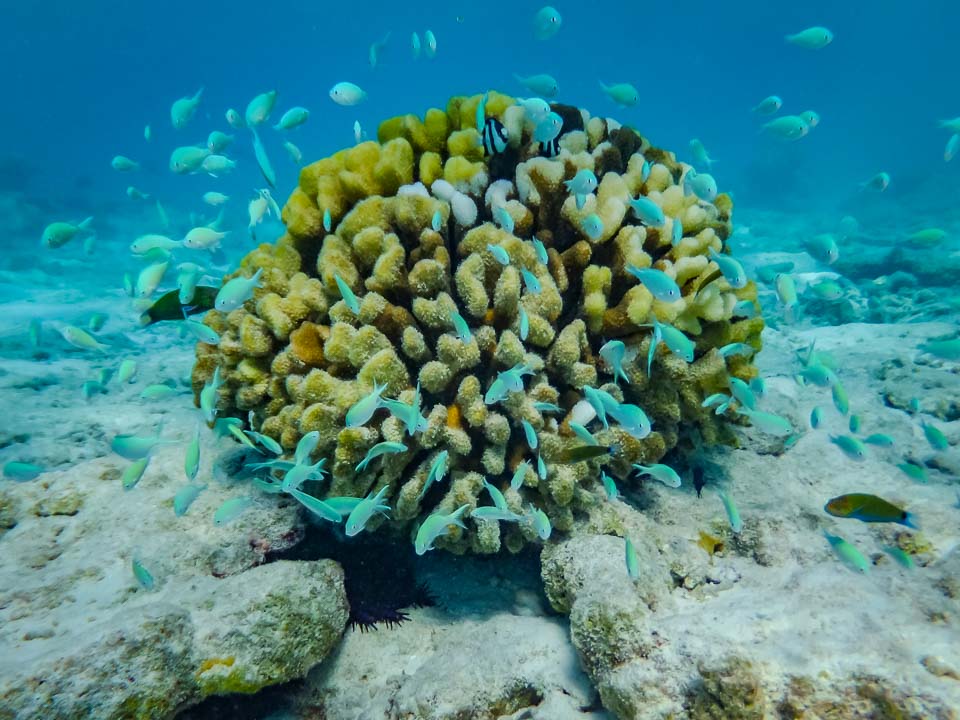 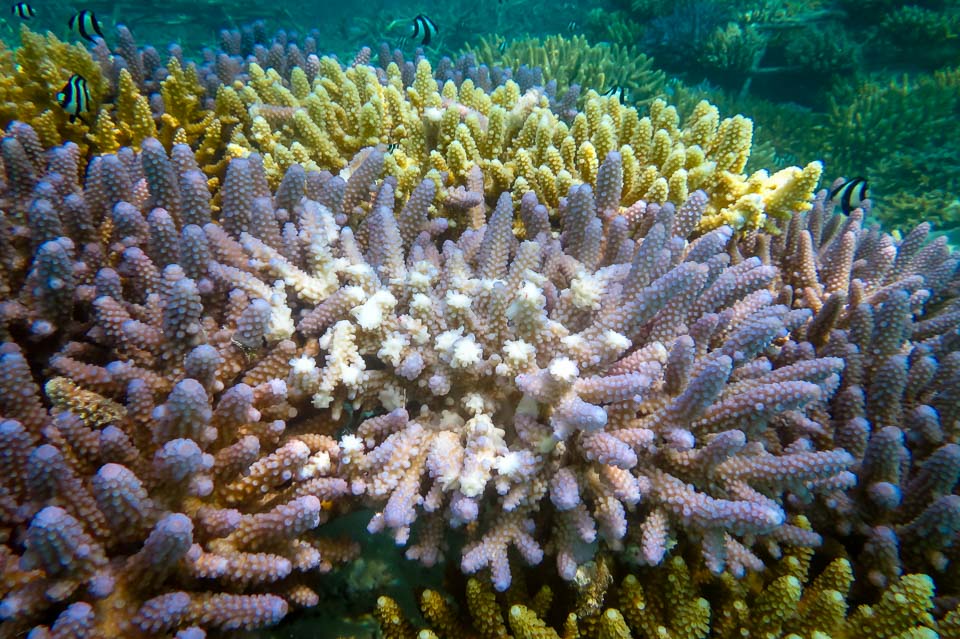 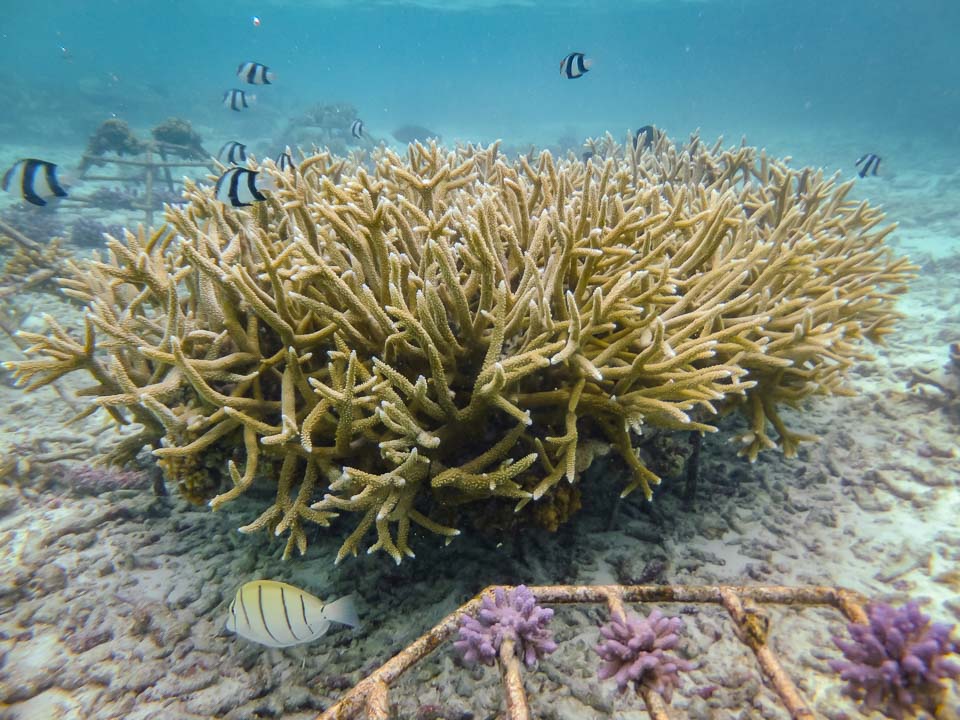 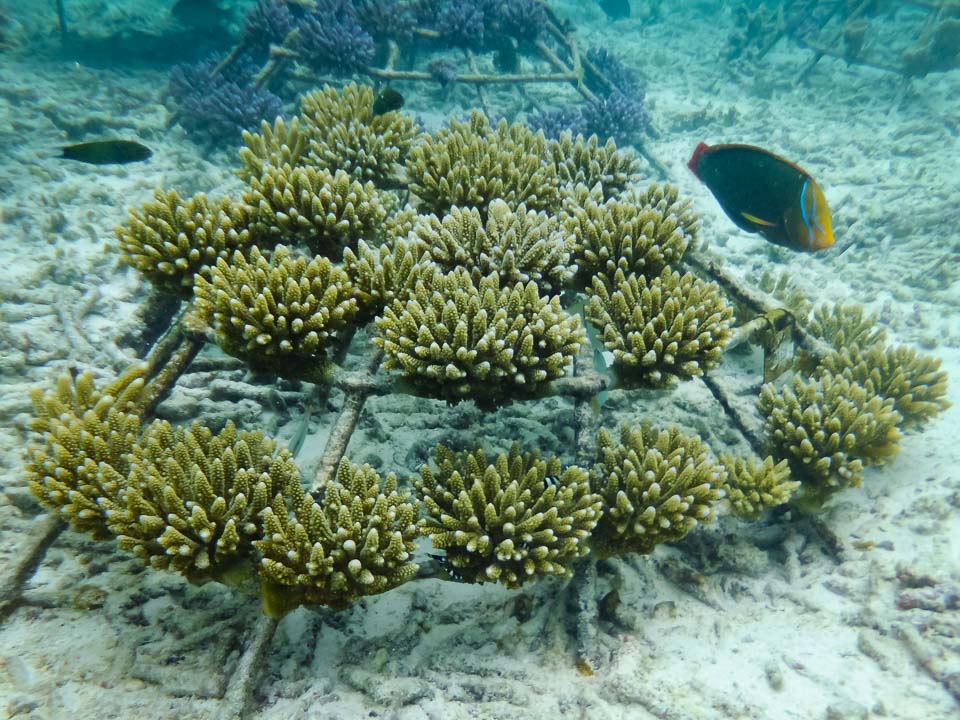 Emily’s research project is ongoing, testing the hypothesis that: “coral fragments of a smaller size grow rapidly, until reaching a grow-out phase, whereby their growth rates begin to slow”.

Different sized coral fragments of Acropora digitifera are being photographed on a weekly basis, and image software is being used to calculate growth measurements. Some growth has been observed although completing the project over a longer time period would allow a clearer trend to be observed.

Some of the fragments appear to have had some ‘chunks’ taken out of them – probably the result of herbivorous predators scraping algae from the colony surfaces – and so their size has reduced from what it was originally.

Emily has been writing a blog about her time working at Marine Savers as a marine biology intern – see our Blog page for more. 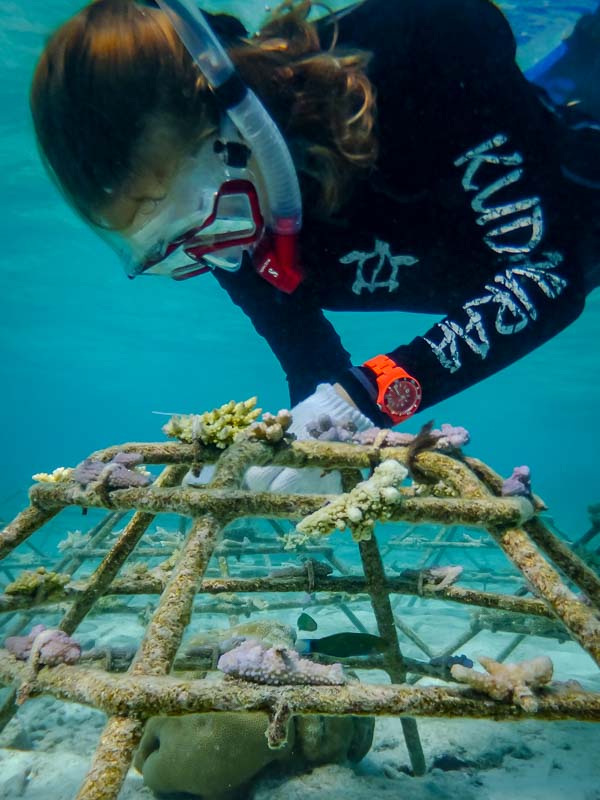 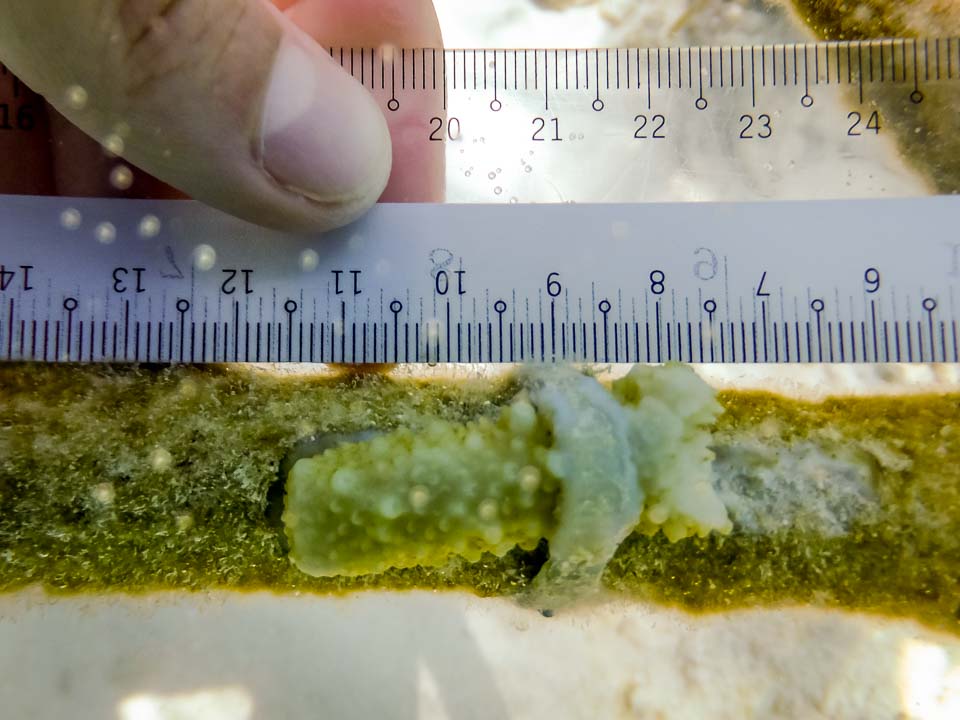 We recently had the pleasure of welcoming students from grades 9 and 10 of Ungoofaru School (Raa Atoll). The group enjoyed a marine awareness presentation, a tour of our facilities (Fish Lab, Turtle Rehabilitation) and enjoyed making their coral frames. 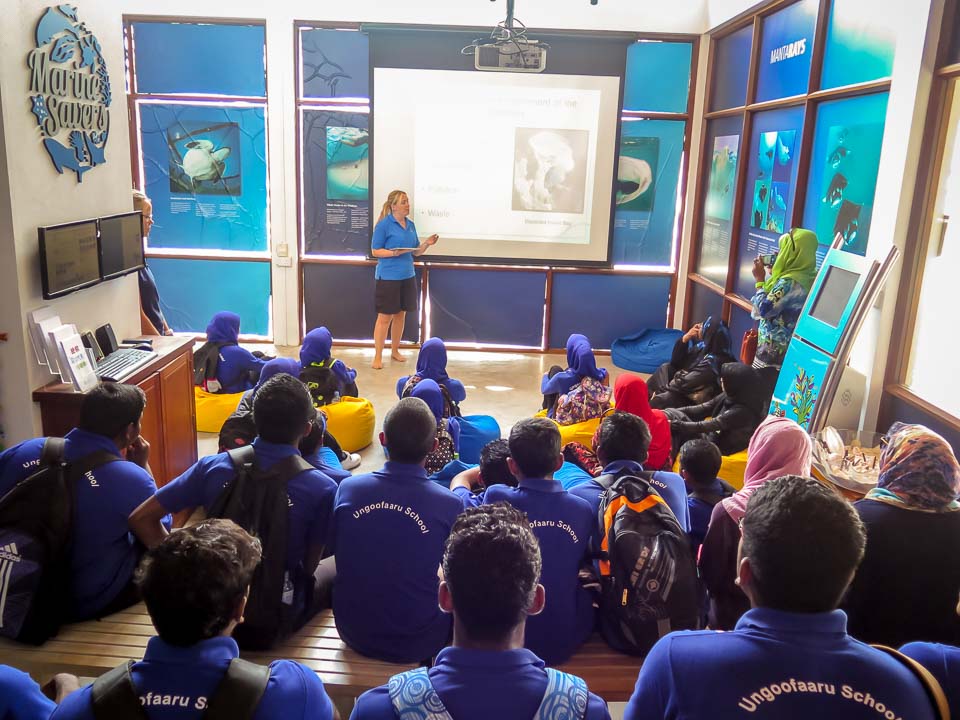 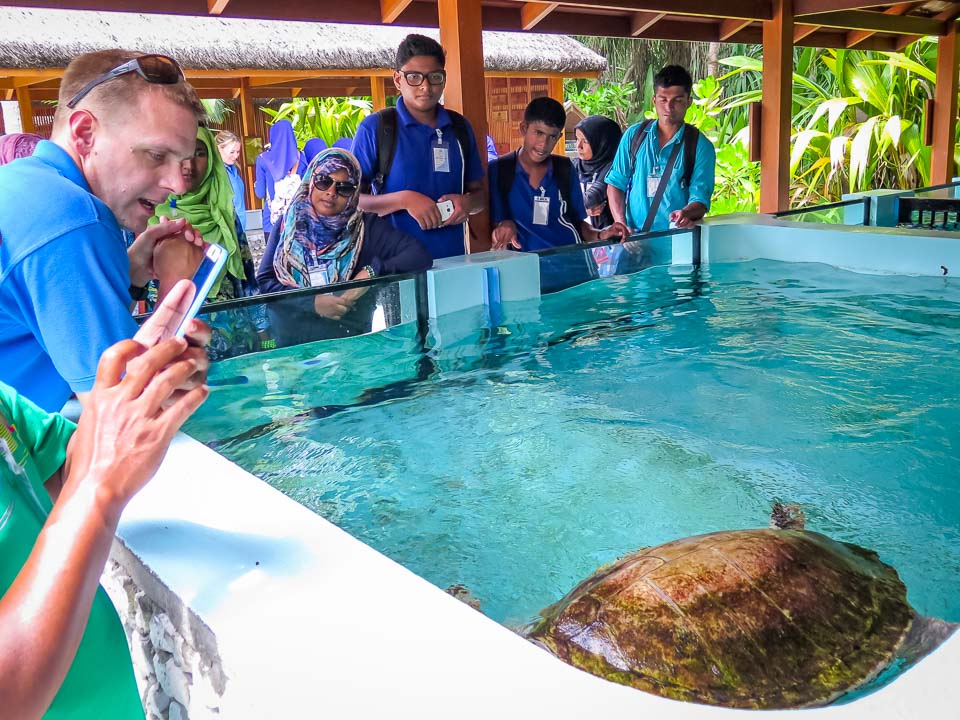 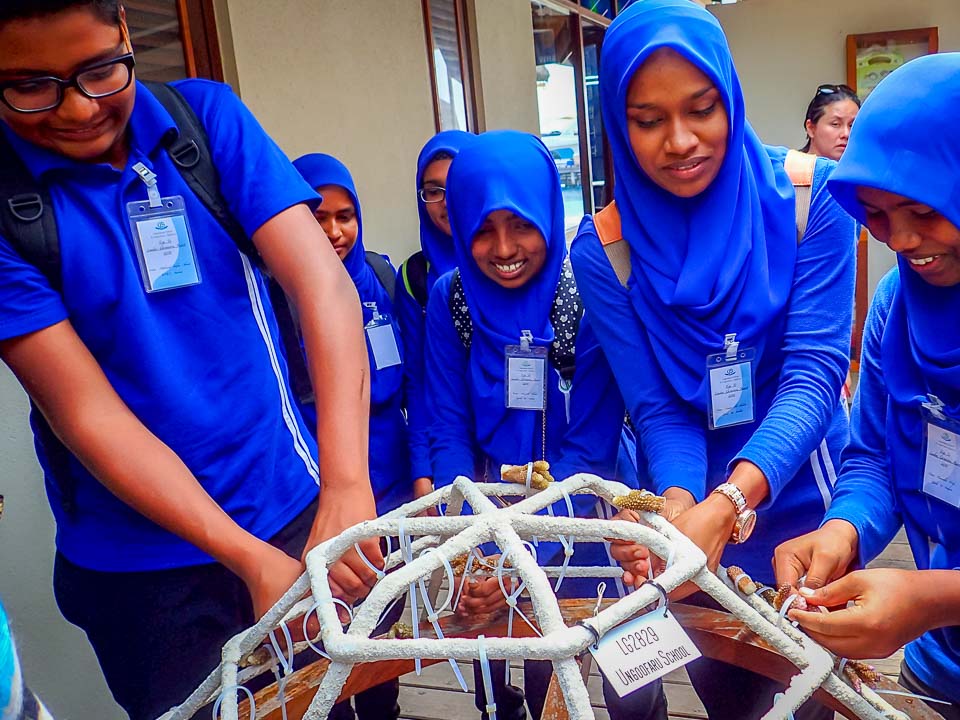 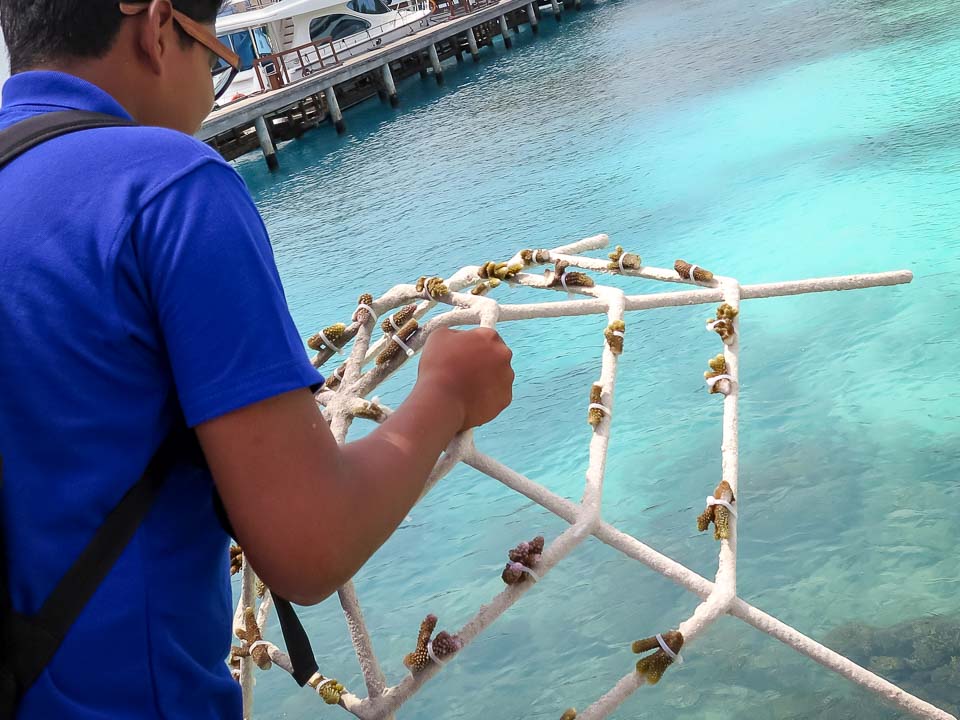 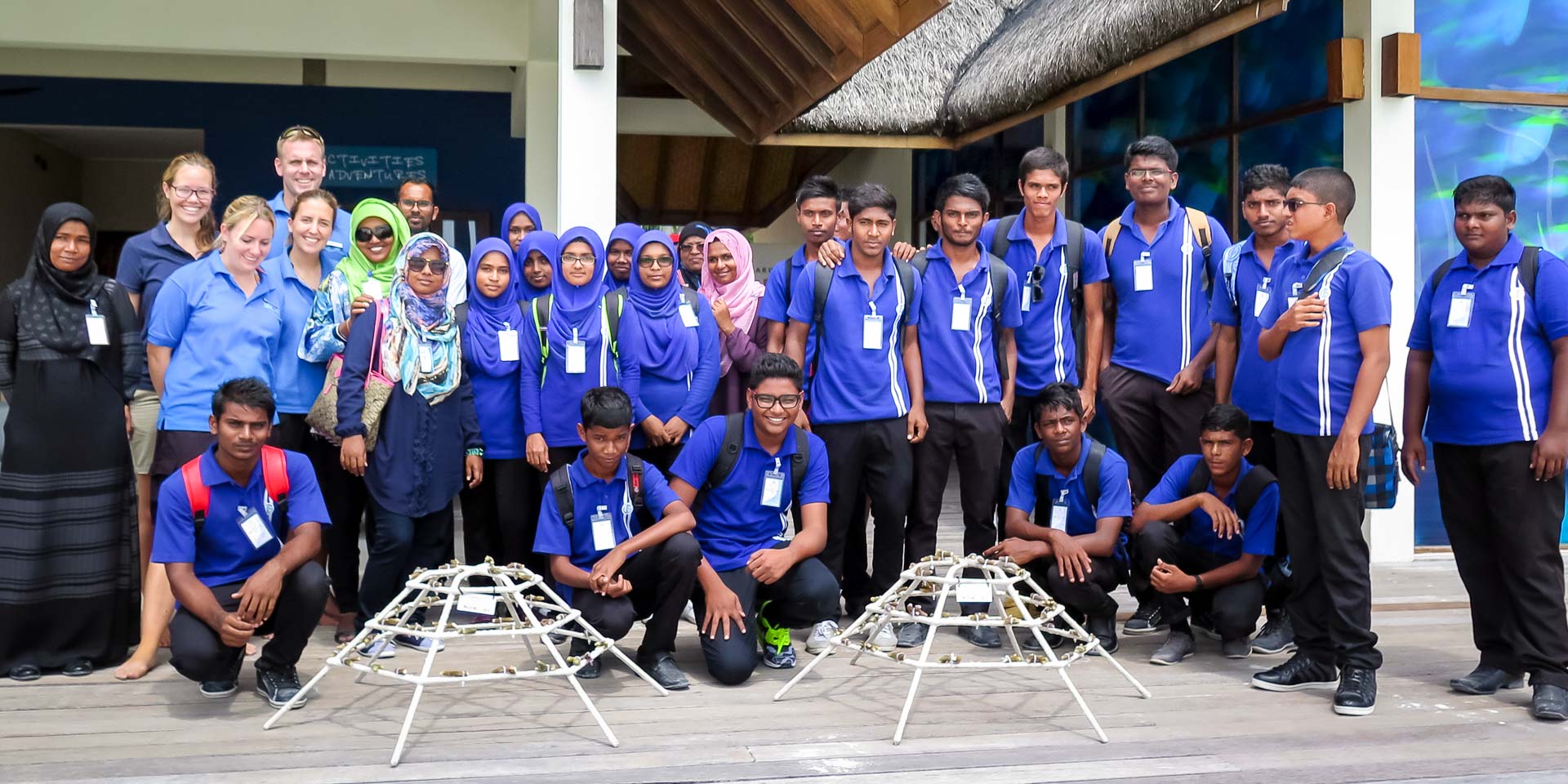