We transplanted 15 new coral frames at Kuda Huraa during December, and will move them to a new site called the Starfish. A total of 150 frames were monitored (maintained, cleaned, photographed), mainly in the Turtle and House Reef sites. The Turtle is now 100% complete and the House Reef is 86% complete, with 655 of the 762 frames successfully monitored. The remainder of the House Reef frames require re-transplantation of fragments, or have lost their number/name tag. Over the coming weeks, along with continuing to re-transplant and monitor other sites such as the Channel and the Starfish (work in progress), we will prioritise the completion of the House Reef.

At the Turtle site, 91 of the 118 frames were re-transplanted, using a total of 1577 coral fragments. Some of the frames had dead colonies which were removed before re-transplanting with new fragments. We generally replaced like-for-like, with a number of species (Acropora digitifera, A.humilis, A.intermedia, A.muricata, A.samoensis, A.secale, A.vermiculata).

Whilst collecting the new corals, we take 4-6 fragments from the outside of mature colonies, to limit damage and decrease the chance for algae and disease to set in. Most fragments were collected from the shallow (<2m) areas of the House Reef this month, for several reasons: 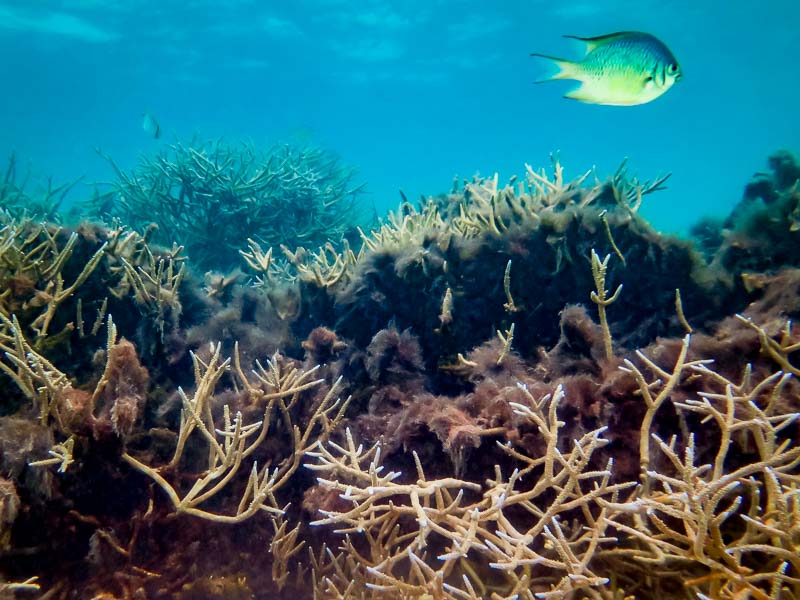 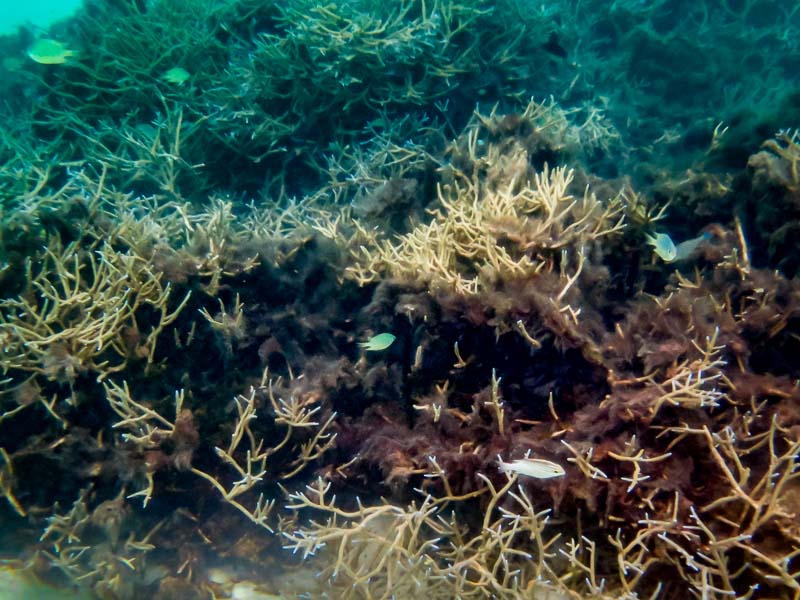 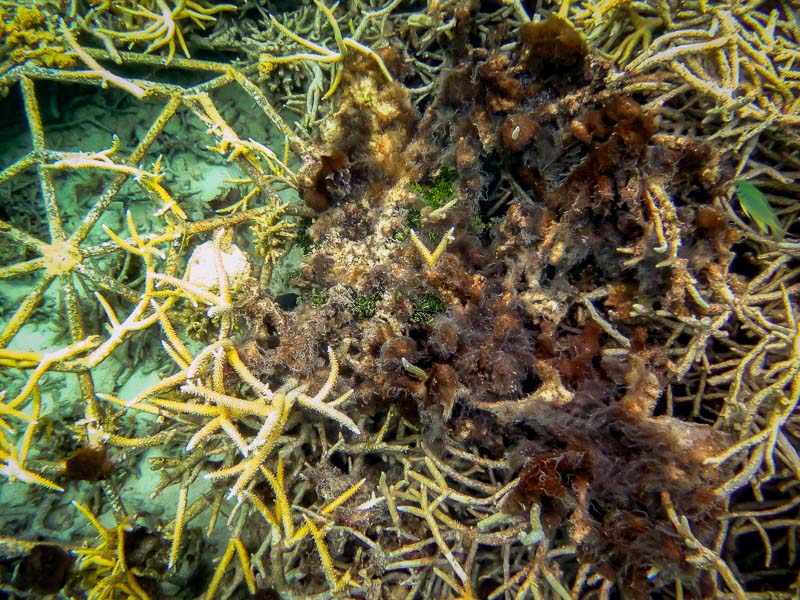 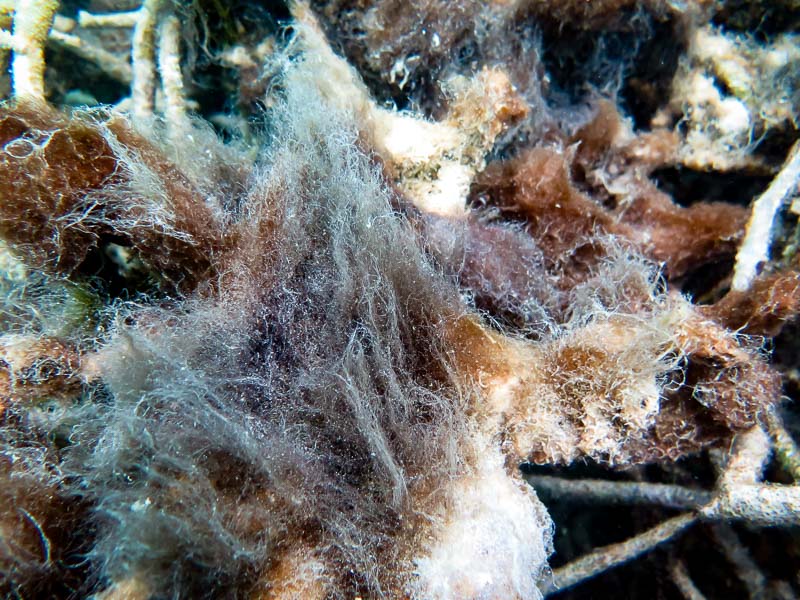 Some coral frames in the Channel were found to be suffering from extensive growth of algae, and we removed two full bags of the problematic ‘weed’ as it can completely smother the corals. We will continue regular monitoring and removal, to control the growth to the point that fish and invertebrates can take over as the natural control.

During the month of December, a total of 279 Crown of Thorns Starfish (COTS) were either removed or injected, mainly at the House Reef site. The COTS ranged in size from 30cm to 45cm, and further feeding scars have been observed on a few of our coral frames (which will need re-transplanting) – see last month for photos and more details. 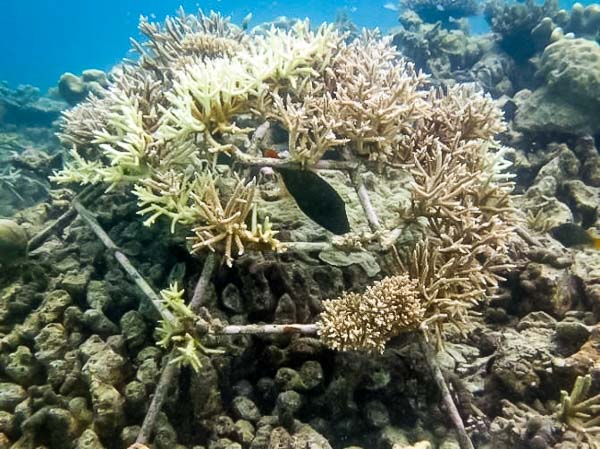 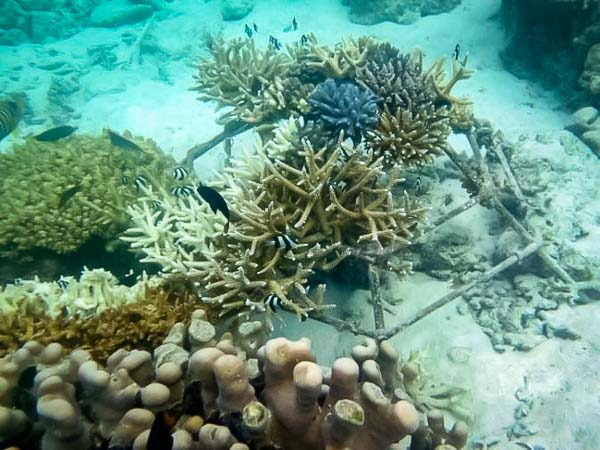 Due to particularly low tides this month, bleaching was observed on the natural reef behind the Channel site. Colonies were showing partial bleaching on the upper branch tips due to exposure to the air (and possible fresh water rainfall).

In the middle of December we were joined by our new intern Emily Chappell, a marine biology graduate from the University of Bangor. As Emily has a keen interest in coral biology she will be spending much of her time on our Reefscapers coral propagation project. Emily plans to study how the size of Acropora humilis fragments affects their growth (tissue production and skeletal extension). The research results will contribute to further studies and help to develop our best practices for fragmentation of different species. 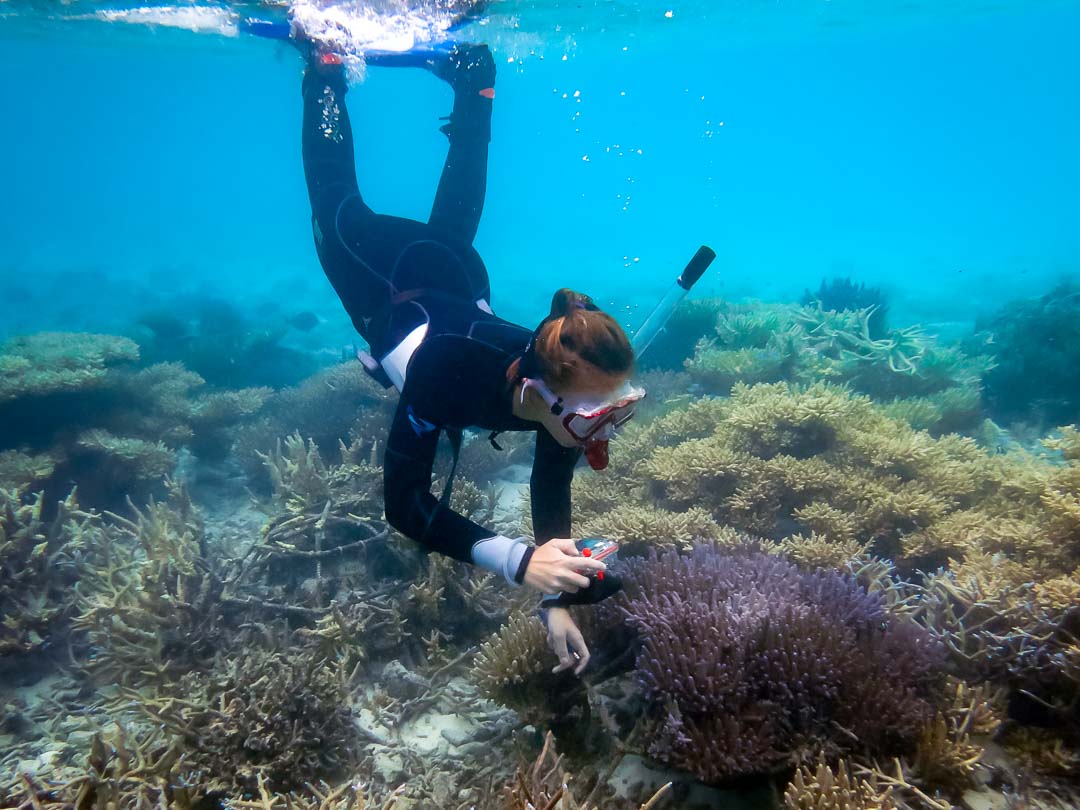 During December, 27 new frames were transplanted at Landaa Giraavaru, mainly at the Blu and Coral Beach sites. We now have 2795 coral frames around sites around the island, covering ≈ 5,629 m2.

Our annual Christmas tree frame was built with guests on 24 December, and then moved to the usual ‘Christmas tree’ site using air-lift bags. 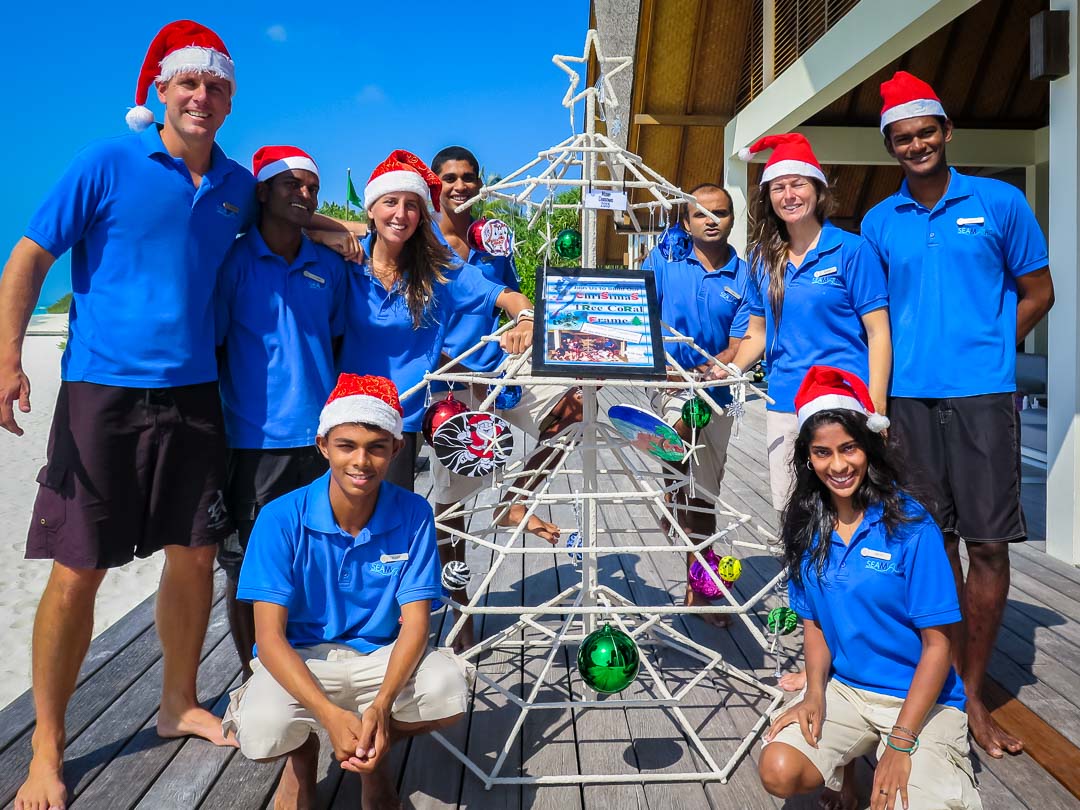 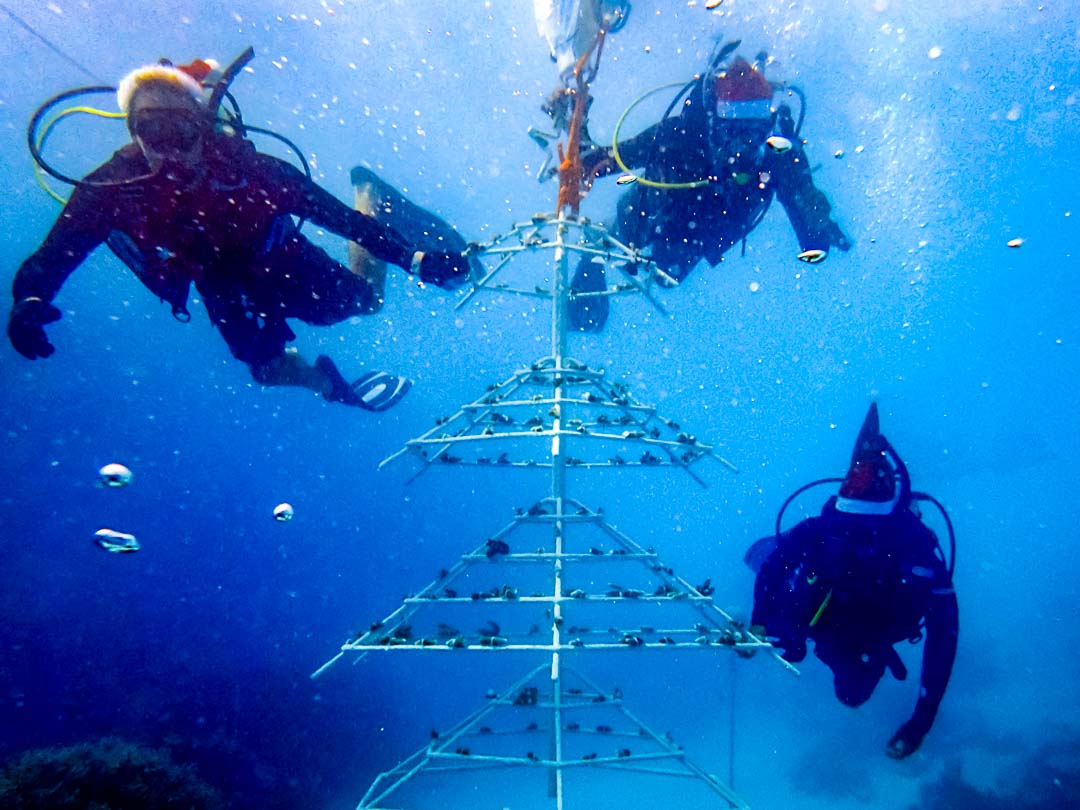 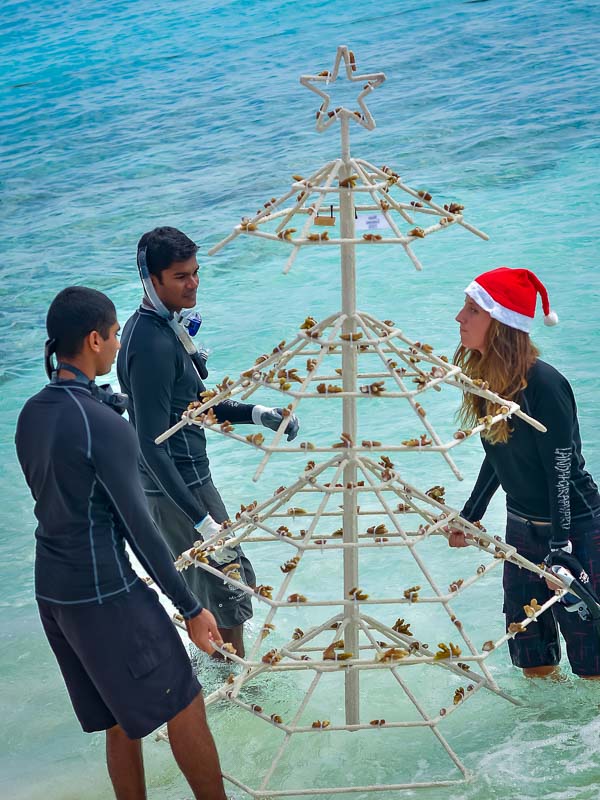