At Landaa Giraavaru we transplanted 35 new coral frames during October and another 35 frames in November, deploying them at our Blu, Landaa Estate and Coral Beach sites. We now have an impressive total of 2,770 coral frames in the lagoons around the island, covering ≈ 5,500 m2.
We also monitored (maintained, cleaned, photographed) a total of 399 coral frames during October (Moon site), and a further 672 in November (mainly at the Al Barakat, Blu and East Beach sites).

In addition, we have been relocating various “at risk” coral frames, to protect them from seasonal temperature fluctuations. The remaining mature frames at SeaBar Jetty were relocated to the Ying Yang site, and 28 of the youngest (less than 1.5 year old) Ying Yang frames were re-transplanted with new coral fragments and moved to Coral Beach.
Long term global forecasts are already predicting another warm year in 2016, so we are increasing future resilience by favouring our deeper sites for new frames, and transplanting with those coral species seen to be less-affected by the warmer waters experienced earlier this year. (Most commonly Acropora humilis, A.digitifera, A.gemmifera, A.nasuta, A.secale and A.vermiculata; for ‘mono-specific’ frames the branching A.nobilis and A.muricata).

Frames in Al Barakat are in good health, but showing some small signs of fish predation and sand accretion (lower coral fragments covered with sand).
Many of the young frames at the Blu site have been re-transplanted following the coral mortality from April’s bleaching event. We used 1300 new coral fragments in total, mainly from the species Acropora humilis, A.digitifera, A.gemmifera, A.nasuta, A.secale and A.samoensis. A few frames were re-transplanted with a single branching species (A.nobilis, A.muricata).
Some frames have showed a remarkable recovery from the bleaching; for example LG1260 (transplanted in November 2011) and LG2043 (transplanted in February 2014).
But our “old square” frame experiments are faring less well, becoming broken or buried under moving sand (although LG0146 is doing well, for example).

Most frames in East Beach showed a good level of health, despite being located in shallow waters. This site is less frequented by snorkellers and has perpetual water movements (exposed site with waves and currents). We have re-transplanted around 1000 coral fragments in total here this year.

The shallow lagoon Spa site suffered quite a lot from the last bleaching event. The monitoring pictures of some frames show a striking contrast between April (bleached corals) and November 2015 (dead corals). Some frames show a partial recovery (e.g.: LG0365 from 2012) whereas other mainly recent frames were totally dead (e.g.: LG2402 from December 2014) and have since been re-transplanted. 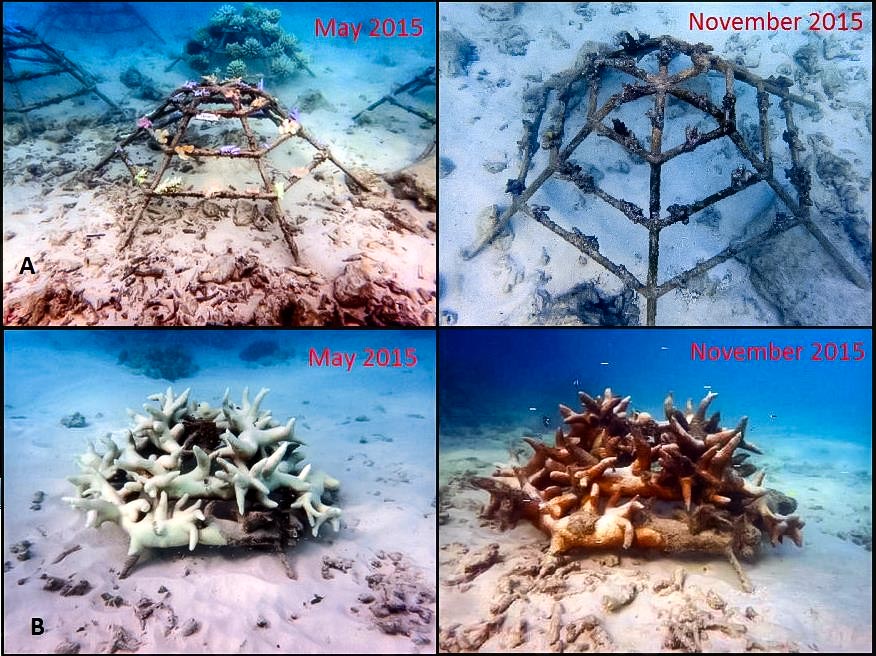 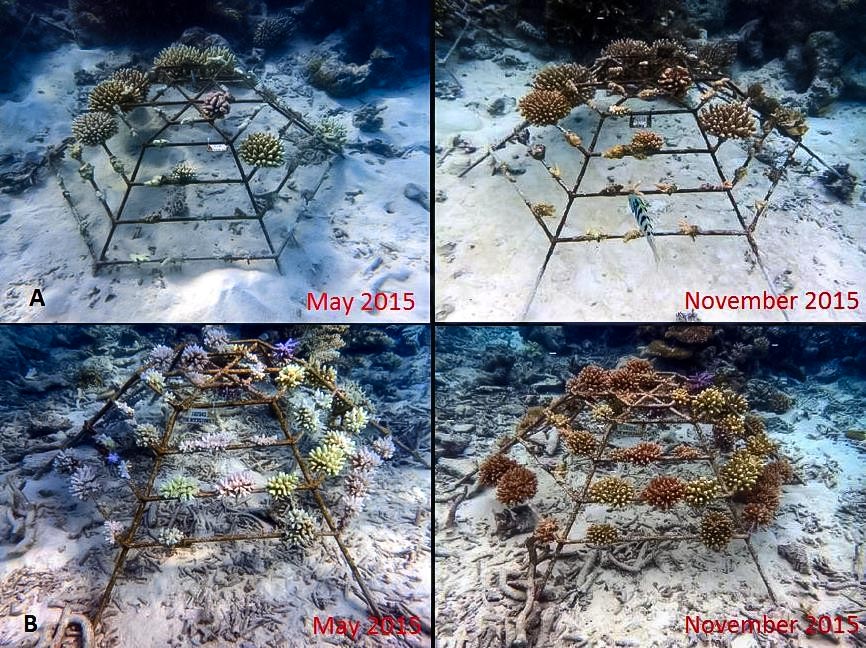 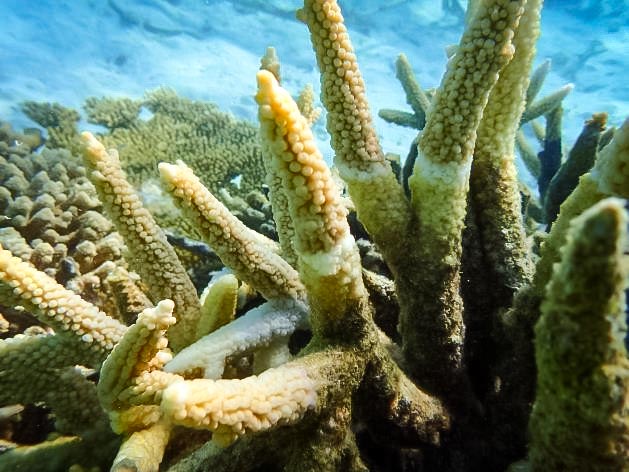 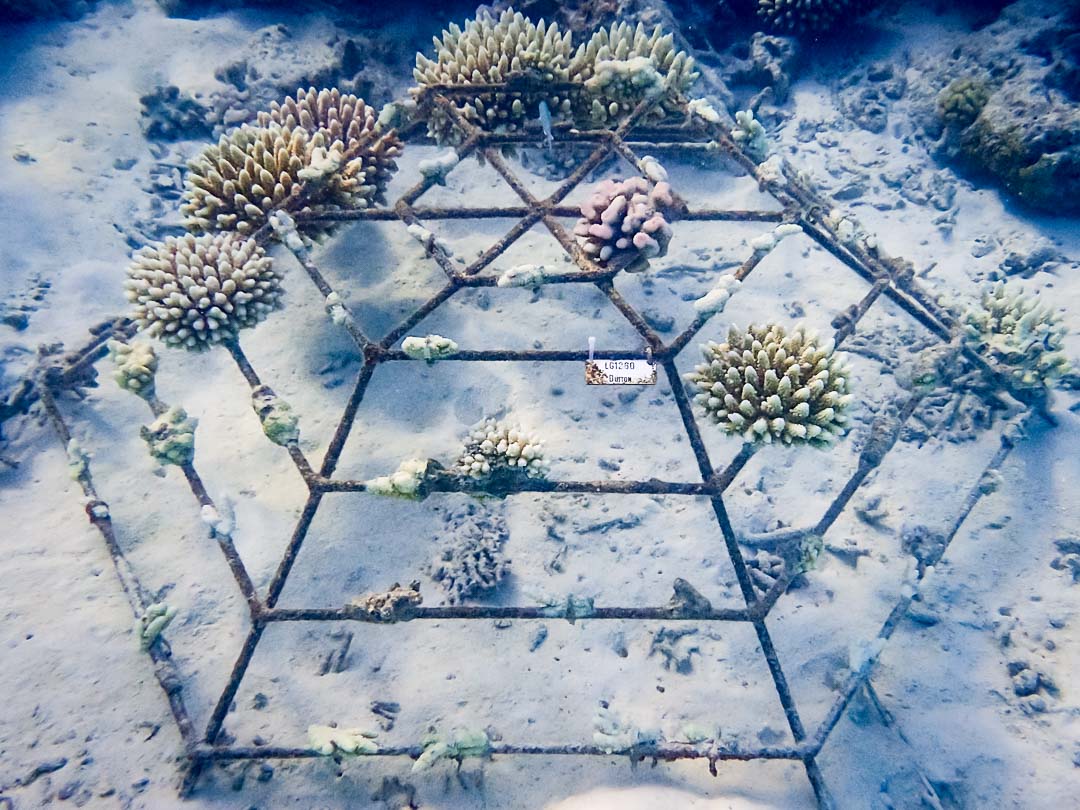 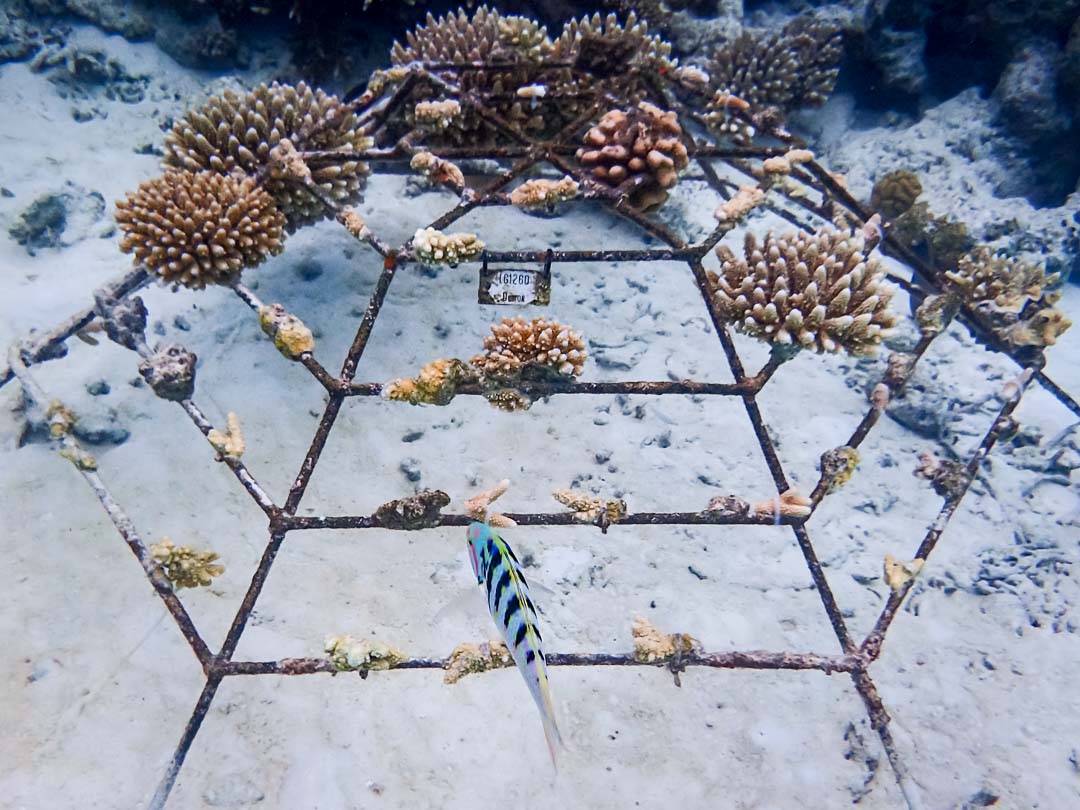 We made 20 new Reefscapers coral frames during October and a further 13 frames during November, deploying them mainly at the new Turtle site on the sunset side of the island here at Kuda Huraa. In the coming months this site will be rearranged into a starfish shape and remapped. Taking into consideration this year’s El Nino event and potential for bleaching, frames are being deployed in deeper waters along the house reef to increase resilience against warmer ocean temperatures.

We also monitored (cleaned, maintained, photographed) a total of 340 frames from the House Reef this month, and have been using Google Earth to create markers (green = monitoring planned, pink = monitoring complete).

Of the 64 frames at the Green Lagoon, many have not recovered from the bleaching event earlier in the year and will require partial or complete re-transplantation. This site is not ideal for the coral frames, due to the poor water currents and bright sunlight in shallow water (encouraging algal growth) and excessive sand movement (covering the lower parts of the frame).

Pre-assessments have been completed to start the re-transplantation of the old Turtle site, a total of 1383 fragments of 15 different species will be required. As the warmer season is approaching, we will collect coral fragments from well-established frames that have survived previous bleaching events, as well as from wild mature colonies from shallow sites (less than 1m), to increase the chances of selecting more resilient colonies. Wild colonies will also be used to increase the genetic diversity at restoration sites.

Our Channel Area coral frames are suffering from predation by Drupella snails, which are seen clustering at the branch bases of the digitate coral species (especially Acropora humilis). Due to the intricate structure and closely compacted branches of this species it is not always possible to remove all of the snails without damaging the coral colony itself. Experiences from around the world suggest that Drupella removal can be effective at reducing tissue loss and coral mortality but probably isn’t effective at controlling overall Drupella populations. We are cleaning affected frames, removing any dead coral colonies and re-transplanting with fresh coral fragments. Some of the older frames are also being affected by the gradual movement and build-up of sand in the lagoon, which kills off any corals on the lower parts of the frame.

The Crown Of Thorns starfish [COT] (Acanthaster planci) continue to be a problem this year – they can be invasive and very destructive to both natural and artificial coral reefs. This attractive and innocent-looking starfish can be a problem on reefs world-wide if numbers get out of hand. It is a carnivorous predator that feeds on coral polyps, and one individual starfish can consume up to 6 square metres (65 sq ft) of living coral reef per year (Wikipedia).
In November, a total of 348 COT have been removed from around the island, and the Dive Centre is doing an excellent job conducting a number of COT removal dives. The COT are removed, injected with vinegar or salts to kill them and then safely disposed of (big thanks to the Dive Team for sharing their excellent photos with us).
To estimate the density and distribution of COT on the house reef, one of our team performed a 30 minute night snorkel and counted over 60 individual COT (up to 40cm in diameter). We have also observed large feeding ‘scars’ left behind by feeding activity, on deeper parts of the natural reef.

Crown of Thorns feeding on a Reefscapers coral frame 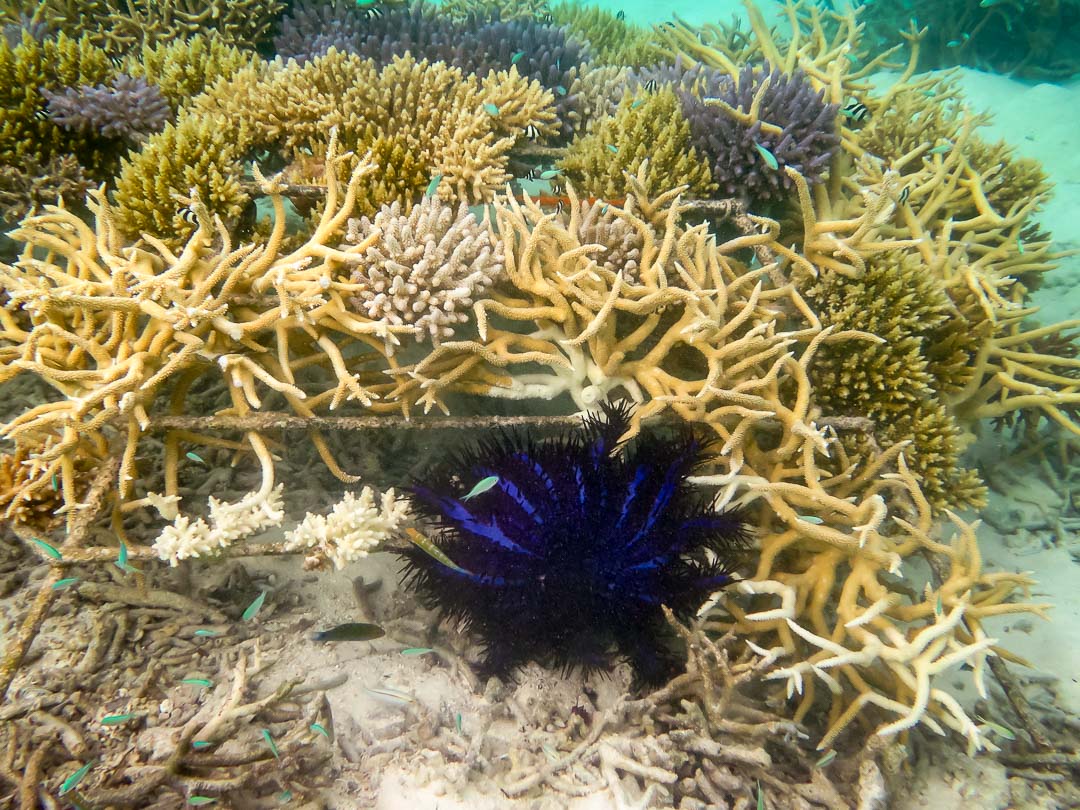 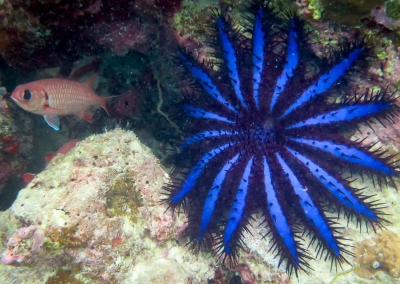 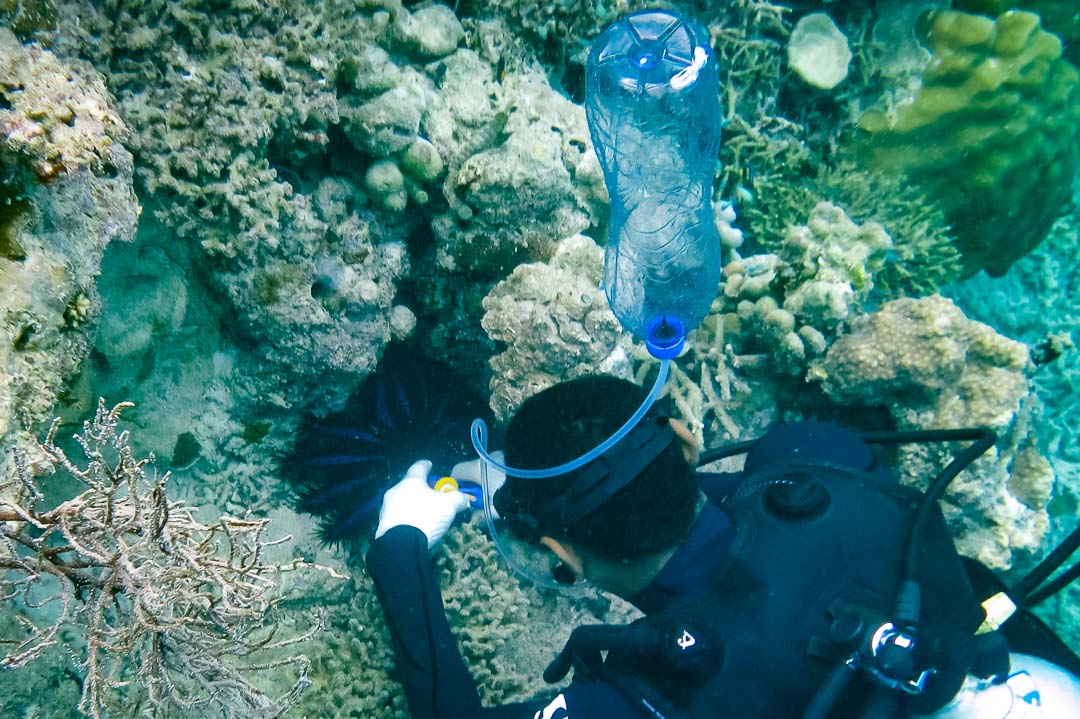 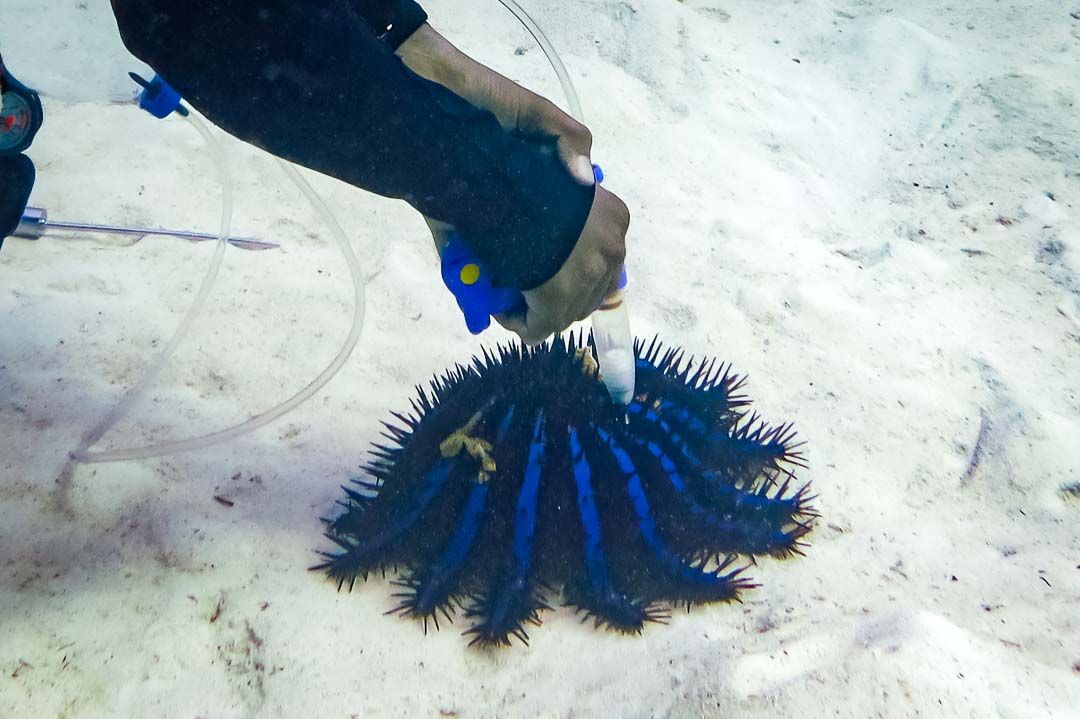 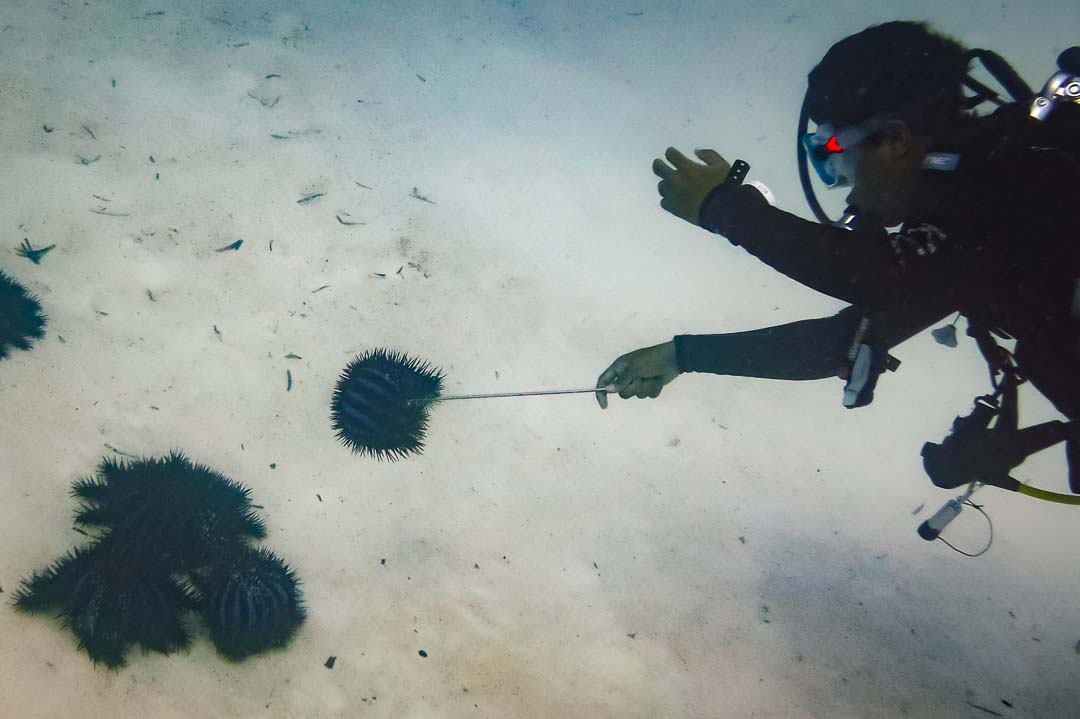 NASA are predicting the current El Niño could be as severe as the 1997-98 event. Data from satellite images reveal unusually high sea surface heights along the equator – an indication that a thick layer of warm water is present, and the signature of a big and powerful El Niño.

The current El Niño has caused the warm Australian oceanic layer to thin out, raising the temperatures of the eastern tropical Pacific. This massive redistribution of heat is thought to contribute to the low SE Asian rainfall, Indian heat waves caused by delayed monsoon rains, as well as Pacific island sea level drops, widespread coral bleaching that is damaging coral reefs, droughts in South Africa, flooding in South America and a record-breaking hurricane season in the eastern tropical Pacific.

More at the NASA website – and on – Google News.