Updates from our Turtle Rescue Centres

Zahiya (admitted 26-Mar-12) – suffering from buoyancy (floating) syndrome, with low overall activity. We are encouraging swimming and diving during feedings and providing enrichment.

Elsa (admitted 08-Jul-13) – healthy, very active and able to dive; often found resting on the bottom of the pool. We are target-training to increase activity levels, improve diving and prepare for a future home in an overseas aquarium.

Ossy (admitted 22-Aug-13) – very active but dives to the right side and will often flip over accidentally. Increase activity daily by encouraging swimming and diving during feedings. 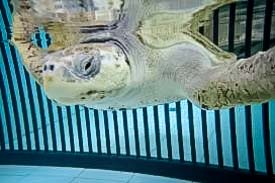 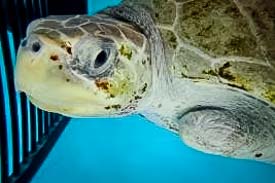 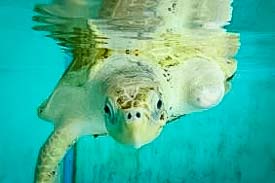 Peggy (admitted 25-Aug-14) – very active but cannot dive. During feeding we feed her from different areas of the pool to encourage swimming.

Kerry (admitted 14-Sep-14) – activity has continued to increase. She is now in a larger pool, being fed twice daily to further increase activity. 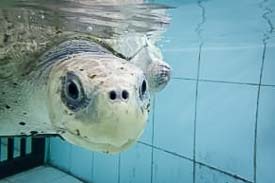 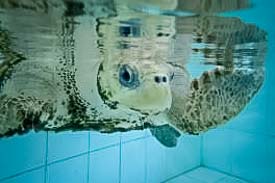 We currently have four Olive Ridley turtles (Lepidochelys olivacea) and one Hawksbill turtle (Eretmochelys imbricata) in our rehabilitation centre here at Kuda Huraa.

Recently, two of our rehabilitation turtles (Rex and Shareefa) began to display neurological symptoms of toxicosis. These symptoms are similar to those displayed by Maria and Buddy (also Olive Ridleys) prior to their sad deaths in May. We have been consulting with several specialised marine veterinarians, but the cause is still unknown. We are also aware of a similar problem affecting three ‘Head Start’ Green sea turtles at the Atoll Marine Centre (Lhaviyani Atoll).

Shareefa (LO.056) admitted 14-Feb-15 from Huvafen Fushi. We are maintaining hydration with fluids, with tube-feeding to supply medication and calories. Shareefa has developed neurological symptoms most likely in response to toxin exposure.

Naseeb (LO.060) admitted 23-Mar-15 from Kuda Huraa. We are caring for his wounds twice a week to ensure they remain clean. Naseeb’s amputation site has healed immensely during the last month, but he is still positively buoyant and we are encouraging diving and activity.

Rex (LO.068) admitted 06-May-15 from Bandos. We are maintaining hydration with fluids, with tube feeding to supply medications and provide calories. Rex has developed neurological symptoms most likely in response to a toxin exposure. 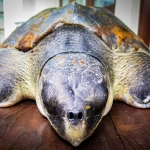 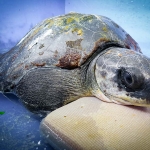 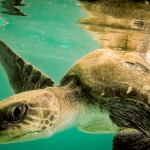 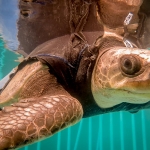 Lylah (LO.072) admitted 28-Jun-15 from Reethi Rah. Lylah (a juvenile Olive Ridley turtle) was found trapped on 28 June, entangled in drifting ghost fishing nets. The team at One&Only Reethi Rah responded quickly to the injured turtle by removing the nets and transferring her to our turtle rehabilitation centre here at Kuda Huraa. Lylah’s right front flipper was badly damaged by the entanglement and unfortunately we will need to perform a flipper amputation. We are tending her wounds daily and applying honey to keep the laceration clean.
To encourage Lylah to eat and remain active, she is given large jellyfish to chase and eat – check out our short video on Facebook of her devouring breakfast! 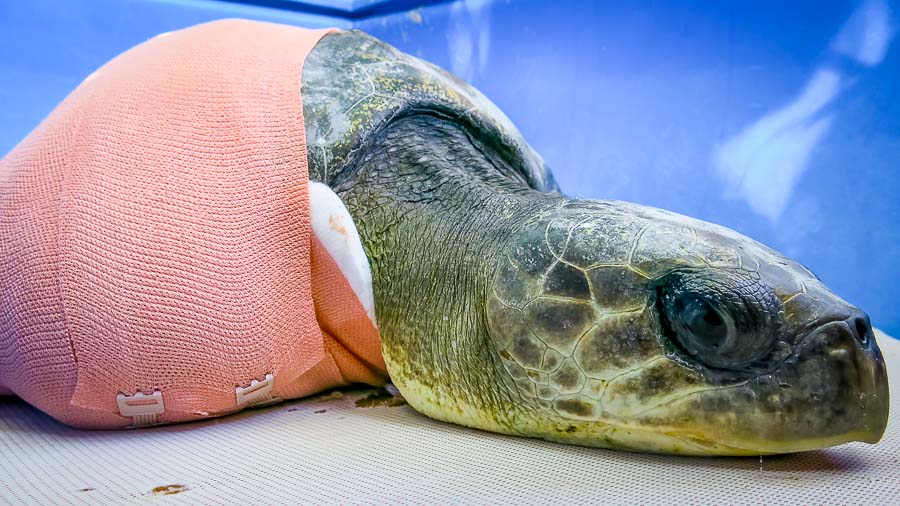 Zoe (EI.012) is a juvenile Hawksbill, admitted 26-Jun-15 from Maalifushi by COMO. Zoe arrived with a deep laceration to the left front flipper, leading to swelling and lameness. We are caring for the wounds daily to keep the laceration clean. Zoe is currently residing in a shallow pool and we will introduce her to one of our deeper pools shortly to increase activity and use of the injured flipper. We wish to extend a BIG THANK YOU to Maalifushi by COMO, for rescuing Zoe and for arranging a sea plane transfer to our centre here at Kuda Huraa. 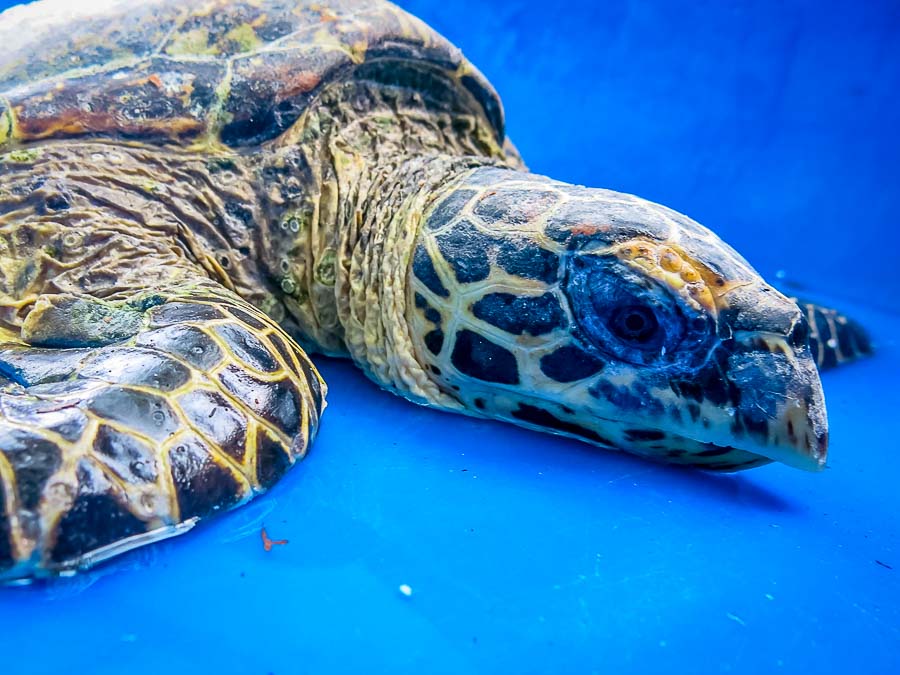 Zoe, a juvenile Hawksbill, admitted to our Centre on 26-Jun-15

Two nests hatched in June producing 165 hatchlings and all of them were released by MDC staff and guests during the new Baby Turtle Release Excursion. One more nest is remaining on Fenfushi and is due to hatch by the first week in July. During the recent NE monsoon season, a total of 20 green turtle nests were laid on Fenfushi Island, producing 1692 hatchlings. Most of these were safely released out to sea, whilst 16 hatchlings were enrolled in our Head Start Programme at Kuda Huraa. 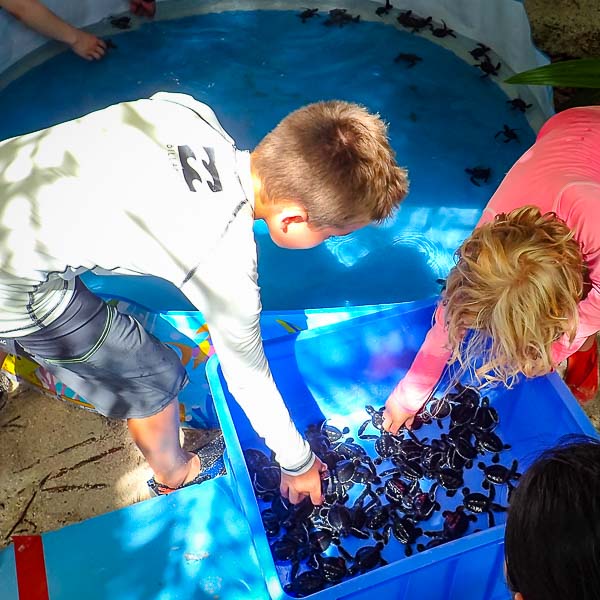 Turtle Hatchlings in Fenfushi pools – to be released

There are currently 22 turtles in our Head Start Programme, representing five clutches of Green sea turtles (Chelonia mydas) and one Hawksbill (Eretmochelys imbricata).

Since arriving in February, the green sea turtle hatchlings have increased in average length (straight carapace) by an impressive 7cm.

We are improving our turtle conservation facilities here at Kuda Huraa, by constructing a permanent roof over the pool area to provide rain cover and divert falling leaves (which can be harmful to the hatchlings if ingested). UVB lights have been purchased to provide controlled artificial illumination, to decrease the risk calcium deficiency and Metabolic Bone Disease.

Dayna Archer, our new marine biology intern, will be carrying out a six week project with the Head Start hatchlings. She will use colour-preference testing to identify which colour(s) the turtles are more attracted to and inclined to interact with. This information could then be useful in the production of fishing nets, to make the nets less attractive to turtles in the wild, and so reduce the dangers of entanglement. The turtles under test will be given the option to eat from a selection of different coloured plates during a set trial period. 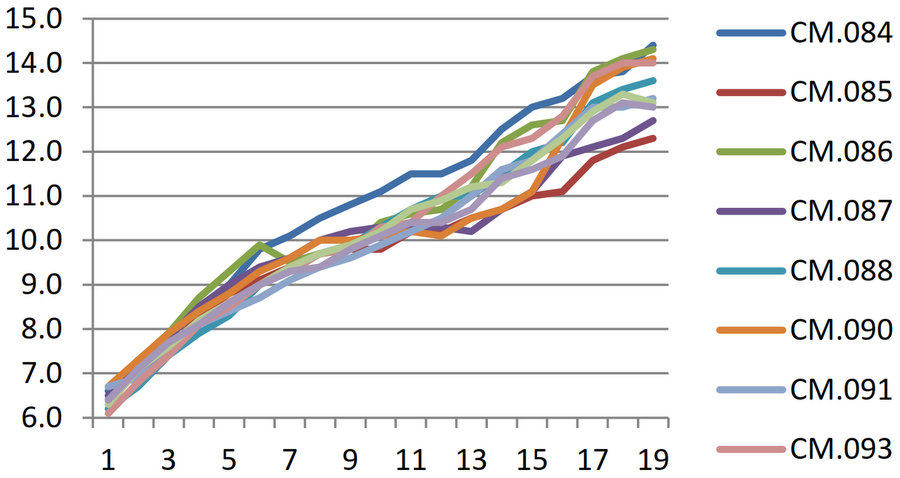