During May, we transplanted 21 new coral frames into the lagoons at Kuda Huraa, mainly in the deeper House Reef site due to the ongoing effects of bleaching in shallower areas. Monitoring was conducted at the Spa and House Reef sites, and it was noted that the Spa area has suffered some mortality due to bleaching and sedimentation.

Over in Landaa Giraavaru, we transplanted 19 new frames and monitored a further 381 frames (East Beach, Spa and Blu sites). Coral frames at East Beach are showing mixed progress, mainly due to the sand being carried into this area by the ocean currents. Several frames have been relocated to deeper waters, whereas other mature frames are now completely covered with corals; for example LG0774 (Acropora  horrida) and LG0772 (Acropora humilis), which were transplanted in Dec 2010.

Since the start of May, many of our coral frames are showing some signs of bleaching – coinciding with the official 2015 El Nino alert for the Indian Ocean region. The seasonally high ocean temperatures during April caused some coral bleaching (Channel and Turtle sites) and actual mortalities (Green Lagoon and Spa sites, Kuda Huraa). Several frames have required complete re-transplanting of all their coral fragments. Frames at 300 and Arc sites (at Landaa) are badly affected, and some of the newer frames there might need re-transplanting. Our Yin Yang of relocated lagoon corals has also been bleached, whereas corals on the South side seem to have better resisted the high temperatures.By the end of May, bleaching was still ongoing. As most corals can survive a few weeks without their symbiotic algae, we will wait until late June to start evaluating the full impact of this 2015 El Nino.

By the end of May, bleaching was still ongoing. As most corals can survive a few weeks without their symbiotic algae, we will wait until late June to start evaluating the full impact of this 2015 El Nino. 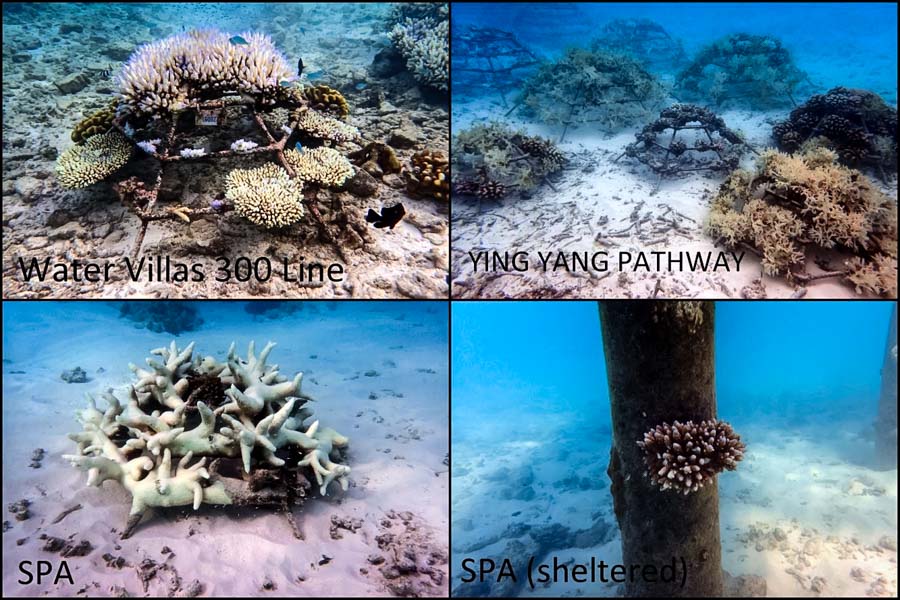 The black band disease (as reported last month) does not appear to have spread to more frames, however we are witnessing a large amount on wild colonies on the reef, particularly on Porites massives species.

We have recently started a new experiment to investigate our coral propagation methods, to discover which specific protocols are most successful. We will start to look at the different time periods our coral fragments are exposed to the air, and also monitor the effects on the donor colonies (number of fragments removed and rates of recovery). 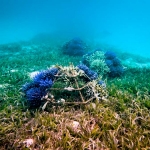 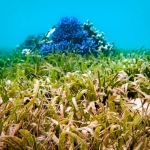 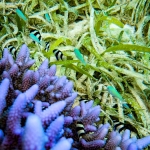 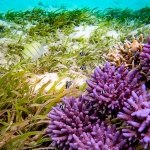 We’ve been very busy at the Marine Discovery Centre planning an exciting new experiment; relocating some of our coral frames to a seagrass bed. This is to study how the environment reacts to the introduction of these corals and their associated fish species. Coastal development and other anthropogenic activities have resulted in exponential seagrass growth, covering large areas of Maldivian shallow water lagoons. Although seagrass herbivory is considered a highly important link in the food chain, it is unclear how the reef and the local herbivorous fish will respond to this change in habitat.

Thousands of species of fish rely on both seagrass ecosystems and coral reefs as habitats and food resources. Many juveniles will spend the majority of their lives hiding in the crevices of their homes to avoid predation, so these are often referred to as ‘nurseries’.  By relocating frames, we will be combining the two ecosystem structures.

There are several potential results of this merger. The corals and seagrasses could fight for resources, for example sunlight to photosynthesize, and subsequently outcompete one another. Alternatively, they may develop a symbiotic relationship in which the seagrasses will transfer nutrients to corals, while the coral protects the seagrasses from currents, allowing them to take root more effectively. Seagrasses can also act as a buffer for the sediment load in the water, so the composition remains at an optimum for coral survival. It will be interesting to see how our study subjects will behave.

Before we had even finished planting the frames, a school of juvenile Humbug Damselfish (black and white colour) and Blue-Green Chromis (pale green) had arrived to check out the new surroundings. A few minutes later, a Convict Surgeonfish started grazing on the seagrass, suggesting that this study could be a great success!

The relocated frames (KH1061, 62, 63) were first transplanted on 24 March 2013, and have had 2 years of successful growth, making them excellent study subjects. Each frame consists of three robust species of coral; Acropora humilis, Acropora microphthalama and Acropora palifera. We will monitor them regularly to examine the abundance of seagrass around each frame and the diversity of fish species inhabiting the corals. 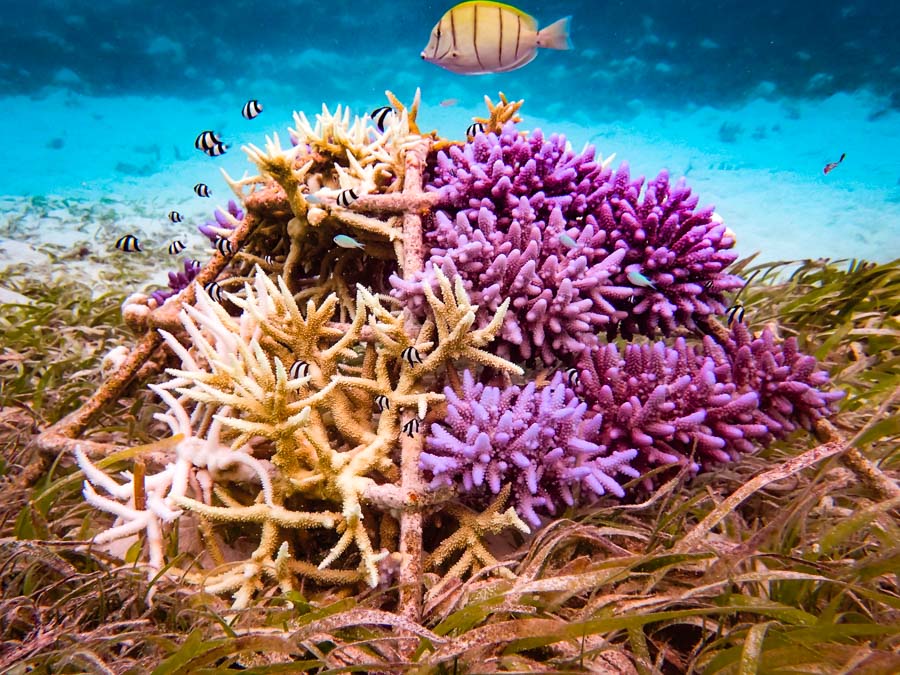 We recently played host to the new Four Seasons apprentice class of 2015. All 33 new apprentices helped us with several large coral frames, to gain some hands-on experience and increase awareness about our environmental projects. One of the frames is number 1600 here at Kuda Huraa which will be positioned onto the House reef. 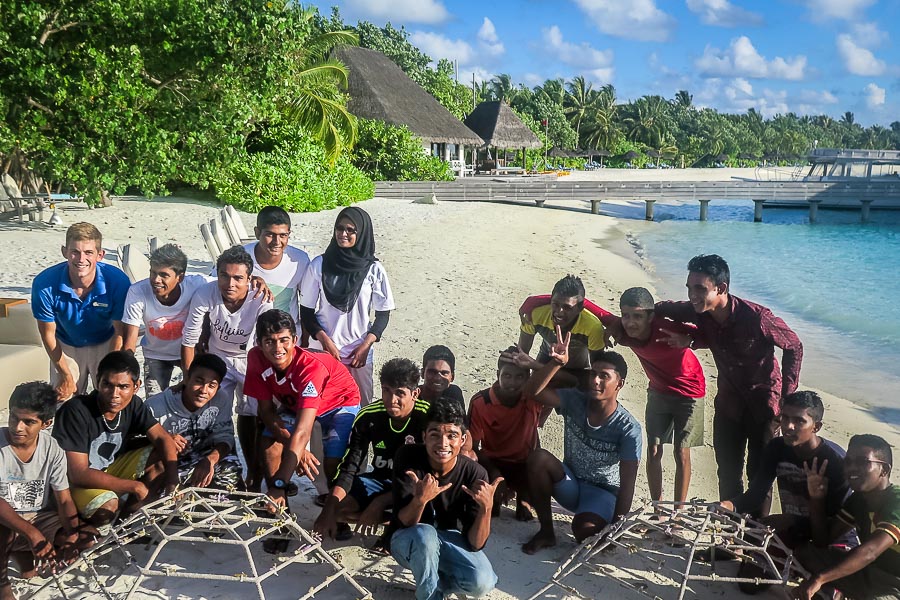 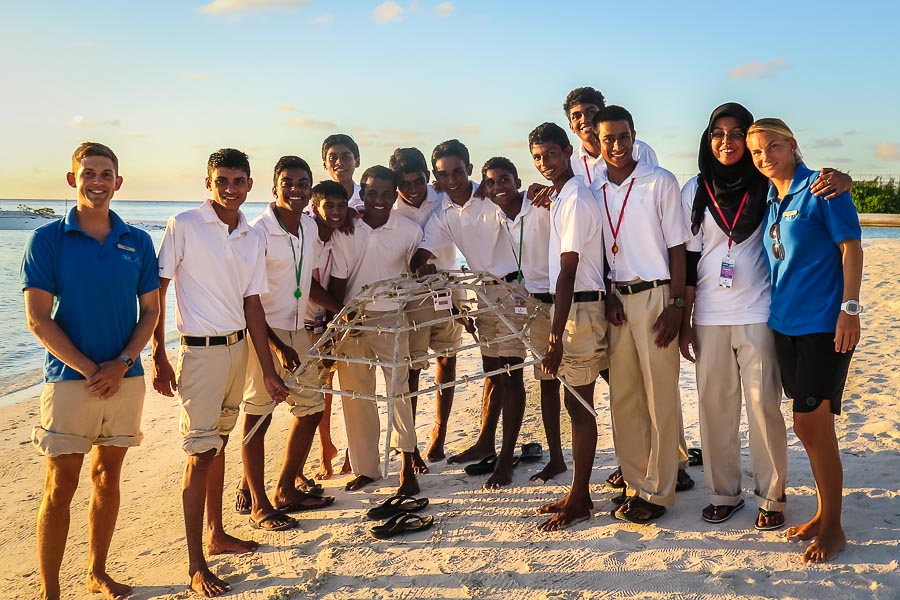