Our national Turtle ID Programme was started back in 2011, and aims to create the first Maldives-wide photographic database of sea turtles to study population dynamics, migrations and habitat use. Photos taken by marine biologists, divers, and tourists alike can help us understand the movements of sea turtles.

Photographic identification is a non-invasive technique that allows large amounts of data to be acquired quickly across a large area from observers with little or no scientific training. At present the Maldives National Sea Turtle Identification Programme (MNSTIP) has received photographs of sea turtles from more than 200 different sites, located across a total of 16 atolls from up and down the country.

Within the MNSTIP database there are currently three different species of sea turtle – most commonly the Hawksbill turtle (Eretmochelys imbricata) and Green turtle (Chelonia mydas), plus a single confirmed sighting of a Loggerhead turtle (Caretta caretta).

We require three quality photographs (right & left facial and full body) to confirm if an animal is new to the database, a size estimation, plus the date and location of the sighting (site, atoll, ideally GPS).

With quality photos, we are able to visually distinguish the individual facial ‘scutes’ (scales) of the turtle, to produce a unique code for each animal. (The facial scutes are comparable to human fingerprints for ID purposes). Once the code is generated by our software, we search the database to see if the animal has been sighted previously. If a match is found, the photo and sighting information is added to the database, and the participant is informed of the turtle’s ID number. If a database match cannot be found, and we have quality photos and resultant codes for both left and right facial profiles, the turtle will be entered as a new individual and given a unique ID number.

This information is sent with a certificate to the participant who submitted the photos, with the option of naming the animal too. If the picture quality is insufficient to generate the ID code, the photos and data will be saved and reviewed periodically to see whether they match any turtles which have been added to the database within the interim period. 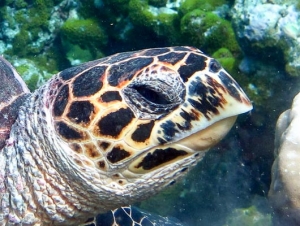 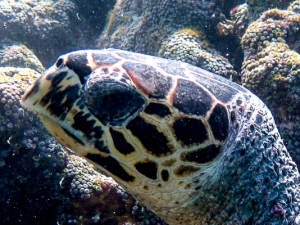 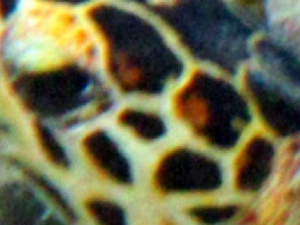 In order to identify the sex of a turtle we need a whole body photograph showing the presence or absence of a tail: male turtles have a long tail extending past the tips of the rear flippers; female & juvenile turtles have a short (often invisible) tail.

To distinguish between females and juveniles, we use body size to estimate if the animal has reached maturity: Hawksbill turtles mature at around 60-95cm in length; Green turtles mature at 69-79cm in length. But size estimations are difficult under water! And so we classify a turtle as mature once it measures 60cm (Hawksbills) or 70cm (Greens). 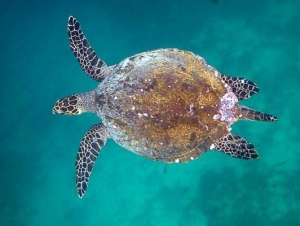 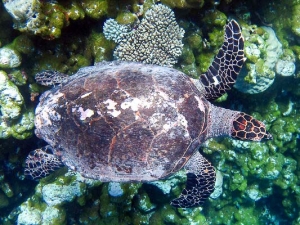 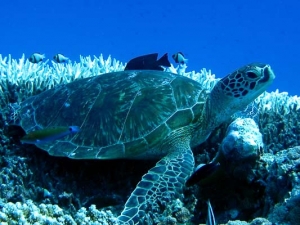 Please do send all of your photos, as the information from repeat sightings can provide us with crucial insights into the life cycle of turtles.
Regular photographs give us a more accurate impression of the population size of a site, atoll or region, as an animal photographed five years ago may no longer be a member of the population. If a site is visited once a week over a long period of time and the same five turtles are documented each time, it can be assumed the population for that site is five. Conversely, if a site is monitored every week over a long period of time and new turtles are photographed frequently, we can assume that this site has a large population size or that it may be an area of high recruitment for juveniles. Also, photos of an animal over time can lead to gender identification; for example, if a Hawksbill turtle is photographed at 50cm as a juvenile, and again several years later >80cm, we can then we establish the sex of this individual

The most important part of the Turtle ID photograph is a closeup of the facial scales, so individuals may be identified using profile coding and our ID database. Please join us over at our Maldives Turtle ID Facebook group and send us your photos. If you would like to participate in any of our turtle conservation projects, you can Contact Us any time – we’d love to hear from you !

Since our July 2014 updates, there have been a total of 293 turtles identified, and we now have a total of 3343 sightings (composed of the following individuals: 1143 Hawksbill turtles, 160 Green turtles and 1 Loggerhead turtle). From the data submitted for the top four atolls (Ari, Baa, Lhaviyani and N.Malé) the breakdown of sex ratios is as follows:

To date, the MNSTIP has received photos from various participants who are located within 16 different atolls around the Republic of Maldives (no photos have yet been received from 10 atolls). Within the 16 atolls currently being monitored, the MNSTIP has data from 214 sites in total. A big thank you to everyone who is contributing, to make this Programme a success.

The team would like to thank everyone who has contributed, and a big thank you to the top three contributors this month: Angela Jensen Scharfbillig (Kuramathi), Kanina Harty (Manta Trust, Kuda Huraa) and Francesca Pancaldi (LUX* Maldives).

We noted that HK1093 “Dhal” was first sighted in N.Malé Atoll at Banana Reef, but interestingly this month we received a confirmed sighting at Vela Faru, approximately 13km away. In general, sea turtles tend to stay within the same area or site, and the data appear to support this, with movements of relatively small distances within the same atoll (with no movements recorded between atolls). For Hawksbills, only 9% of individuals have been sighted at one or more sites in addition to the site they were first recorded, and 6% of Green turtles (much smaller sample size).

Once again the team would like to thank everyone who has submitted photographs; the top three contributors for February were:
Beth Faulkner (MDC, Kuda Huraa), Angela Jensen Scharfbillig (Kuramathi), Aurora Giorgi

All 14 turtles formally identified during February were Hawksbills (representing an extimated 6 females, 1 male, 3 juveniles and 4 of unknown gender). Most Green and Hawksbill sea turtles in our database are identified as juveniles. Hawksbills are considered mature at 65-80cm (straight carapace length).
After hatching, sea turtles spend several years in a pelagic state before recruiting to benthic foraging areas, coral reef and sea grass beds, at about 30cm straight carapace length. Although the data would suggest that there must be a high level of recruitment, these juveniles are still subject to mortality through predation from large predators, illness and human interaction thus continually decreasing the number of juveniles reaching adulthood.

HK1040 “Lilli” was sighted at Kuramathi during February, 2015; this turtle has not been documented since January 2014 at Rasdhoo however, these sites are approximately 1km apart.
HK0961 “Twishy” was documented for the first time since being identified and added to the database in May 2014, both sightings occurred at the same location, Kuramathi, Ari Atoll.

Most information regarding sea turtle reproductive biology is based on nesting females, with little knowledge on the size and age of mature males. Photographs of the same turtle taken over a number of years will allow us to document the turtle’s growth over time, and estimate the size they reach maturity here in the Maldives. Of the individual turtles in the database, 53% are currently of unknown gender.

Recent photographs of HK0409 “Juliana” have shown rapid tail growth from 2013 to 2015, now confirming this turtle is a mature male. 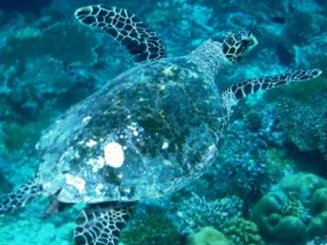 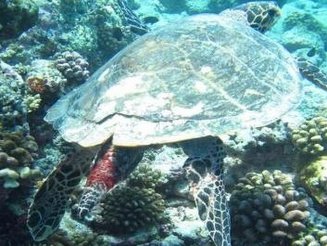 After recruiting to coastal habitats, sea turtles remain in a general area, or home range, which is further supported by the turtles re-sighted this month. The nine turtles that were re-sighted have all been documented in the same site as the original sighting and each subsequent sighting. It should be noted, sightings only provide a short glimpse into the turtles life and it is highly possible for these turtles to still be moving to nearby reefs, which may not be areas frequented by divers. 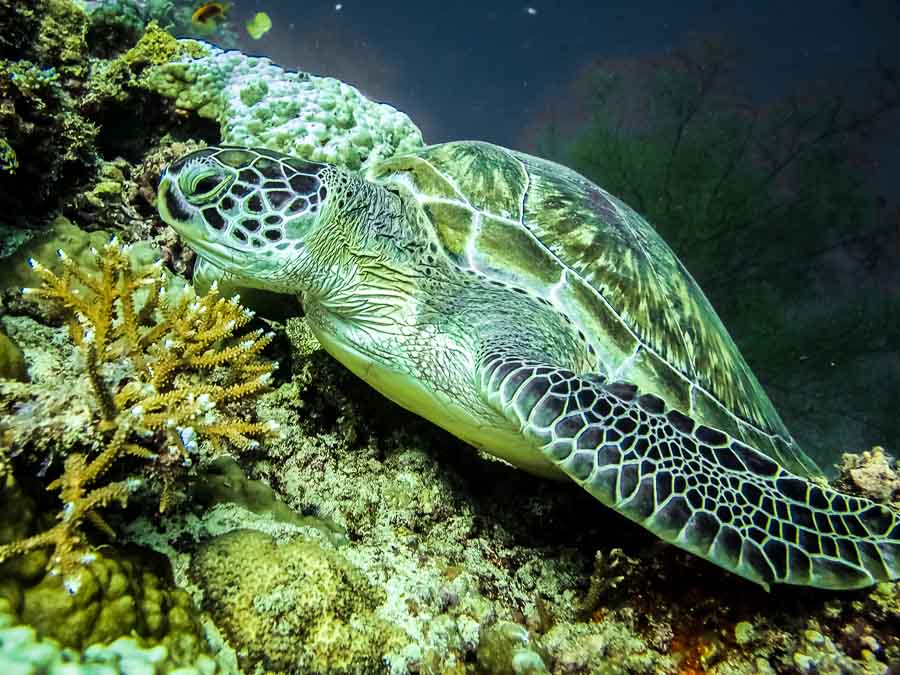