From Fish Lab to Megafauna

In the Fish Lab during November, we observed two spawnings from our breeding pairs of Maldivian Clownfish (Amphiprion nigripes), and a further two spawnings from our Clark’s Clownfish (Amphiprion clarkii).
We now have four aquarium tanks full of the young ‘larvae’, being fed with our plentiful lab-grown rotifers and algae. We are also cycling the water more frequently, to encourage faster growth of the larvae and to maintain a constant temperature.
Our photographs (below) show the maturation of the Clownfish eggs from day 1 (after spawning) until day 6 (just before hatching). 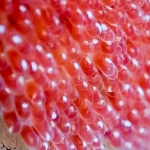 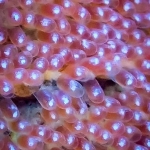 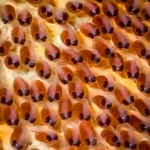 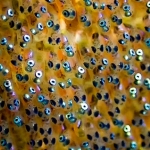 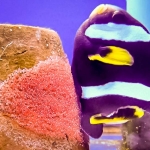 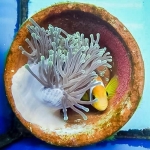 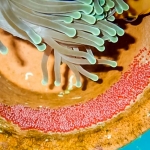 On 25 November, we were pleased to welcome a party of fifteen students (grade six) and five teachers from Kendhoo School to our Marine Discovery Centre at Landaa Giraavaru.

The students were enthusiastic to learn about our marine research programmes, and everyone had a fun and educational day! 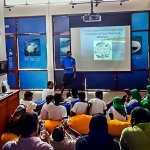 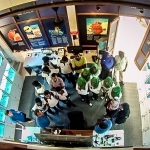 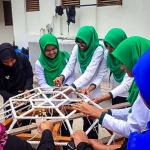 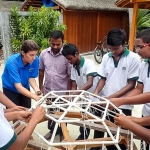 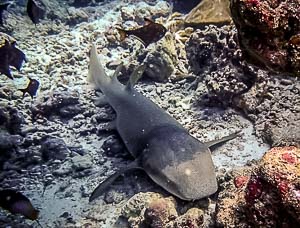 The simplest description of megafauna is an animal large enough to be seen with the naked eye. However, for the purpose of our marine life sightings that are recorded during the snorkelling and dive excursions, it refers to a particular set of large, ‘glamorous’ species. This includes the various species of shark, ray, sea turtle and cetacean, along with several species of bony fish including the bumphead parrotfish, napoleon wrasse and giant trevally.

A total of 57 megafauna sightings were recorded during the four week data collection period:
o  Hawksbill turtles (most commonly sighted species of megafauna)
o  Rays: Eagle, Sting, Manta, Mobula
o  Sharks: Blacktip reef, Whitetip reef, Grey Reef, Nurse
o  One Sicklefin Lemon shark (Negaprion acutidens) was recorded at Batala (Ari atoll), significant due to its ‘vulnerable’ status on the IUCN Red list. Rarely seen whilst snorkelling, the juveniles are common in the shallow sandy lagoons of some islands.
o  One rare giant guitarfish (Rhynchobatus djiddensis) was sighted at Fares (Baa atoll). Belonging to the Rajiforme order, the guitarfish is actually a ray and not a shark.
o  The Napoleon ‘Humphead’ wrasse (Cheilinus undulatus) is classified as an endangered species on the IUCN red list and although this species is widely distributed throughout the Indo-Pacific region, it is not common, owing to the high demand by the restaurant trade for live fish. As it prefers the outer reef habitats at around 10-30 metres depth, it is not often encountered by snorkellers. 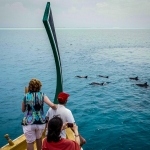 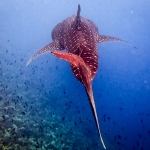 Whale shark from the rear 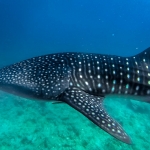 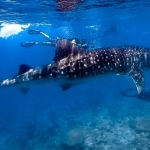 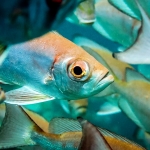 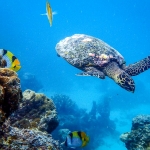 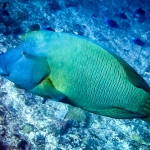