Sea Turtle Conservation in the Maldives

Olive Ridley rescue turtle ‘Riusha’ (OR112) had exhibited some fluctuations in weight throughout the rehabilitation process, and had required force-feeding due to lacerations around the mouth. Her wounds gradually improved, and she was soon able to feed again, gaining 400g in weight in just a few weeks. On 13 October, we successfully released Riusha back into the ocean.

Olive Ridley rescue turtle ‘Kerry’ (OR113) is currently the only patient in our rehabilitation programme at Kuda Huraa. Unfortunately she is suffering from buoyancy syndrome (positively buoyant in the water) and is unable to dive below the surface to forage for food. We have also observed Kerry swimming at an unusual angle, so we are experimenting with a system of weights in an attempt to counterbalance the tilt.

Lefty, Landaa Giraavaru’s rescue juvenile Olive Ridley turtle, has been successfully recovering from her buoyancy problems, and was spotted resting at the bottom of the pool on 8 October. We have transferred her to our deeper pool to regain her strength and practise diving, but unfortunately Lefty now has a damaged beak, unusually due to collision with the pool walls. We are therefore applying antibacterial ointment to avoid infection, and have started experimenting with a protective “crash helmet” (of a sturdy sponge) to prevent further injury.

As part of our research into turtle buoyancy syndrome, we are trialling a new technique with scientific data software package “Image J”. This enables us to record the above-water surface area of a turtle’s carapace, to provide a consistent measure of buoyancy status. We can then quantitatively assess the effectiveness of our air tapping treatments and monitor results over time.
This method is being used for rescue turtles Peggy and Ossy, to specifically assess the effects of our air tapping treatment, where we aspirate gas from their coelomic cavity. 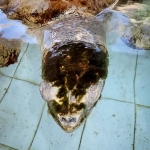 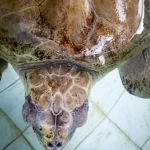 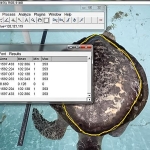 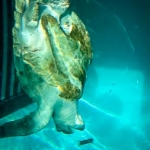 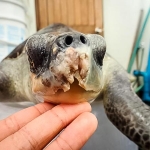 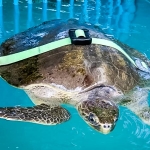 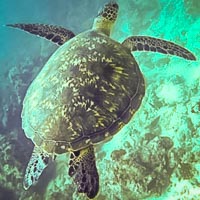 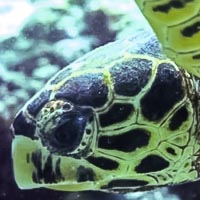 The Maldives Sea Turtle Identification Programme is currently surveying over 223 sites for Hawksbill, Green, and Loggerhead turtles. There are now 1176 Hawksbill turtles, 156 Green turtles and 1 Loggerhead turtle identified, with a total 3337 sightings within the database.

During October 2014, a total of 22 turtle sightings were processed (21 Hawksbills, one Green Turtle), 18 of which were newly identified individuals.
Interestingly, the one green turtle had originated from our Head Start Turtle programme (Naifaru island, Lhaviyani Atoll) so it is great news to have spotted it out in the wild, happy and healthy! 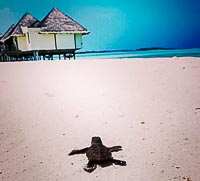 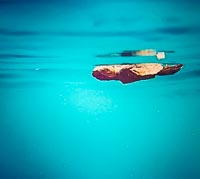 On 16 October, two recently hatched Hawksbill Turtles (Eretmochelys imbricata) were spotted by a guest and a member of staff. The first one was discovered at 11:30am near the Kuda Huraa Water Bungalows, crawling on the sand bank; it measured 4cm in length and weighed just 13g. Once the hatchling was placed into a bucket of sea water, it displayed the characteristically ‘frantic’ swimming motion, and was clearly very fit and healthy!

We patrolled the beach looking for further activity, and although we did not find any signs of an actual nest, we did spot a second hatchling (at 12:10pm) floating under a Water Bungalow. This individual displayed the same swimming pattern as the first one, however it was slowly being pushed towards the shore by the currents, where it would have been stranded on the beach to become an easy meal for any multitude of predators.

‘Jaz’ (G65), our head start Green Turtle (Chelonia mydas), reached our size target this month, so after passing a health check, he was set free on 29 October on a Marine Life Safari, at Velaa Faru, N.Malé Atoll.
This leaves us with ‘G68’, which we hope will continue to grow and show good health for release later this year. 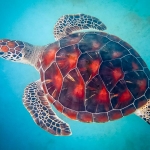 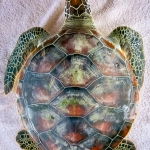 Jaz being prepared for release 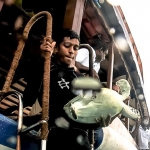 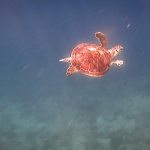