Our Reefscapers teams had a busy month this October, with 40 new coral frames transplanted into the lagoon around Landaa Giraavaru. This brings the yearly figure to 359 frames, and the total number of frames around Landaa to an impressive 2348. In addition, we monitored 273 frames this month, cleaning and photographing them to record growth and overall health, and replacing any missing ID tags and dead coral fragments. We can see that our frames in the ‘Moon’ area are very healthy, and are now supporting a high amount of fish and invertebrate life.

At Kuda Huraa, we transplanted and deployed a total of 19 coral frames during October, bringing the yearly total to 210 frames. We have been observing some sand sedimentation problems in certain areas, so we have been lifting and moving some of the established frames. As the coral starts to grow and flourish, obviously the overall weight increases and there is a tendency for the legs of the frame to sink into softer sand areas on the sea bed. To counteract this, we are experimenting with a new ‘foot’ attachment with a large surface area, to spread the weight of the frame preventing it from sinking.

We have also been observing that some of the more isolated frames have not yet attracted much fish and marine life, and so have a tendency to accumulate algal growth (mostly cyanobacteria), which can eventually smother and kill the coral fragments. This is being solved by cleaning the affected corals and moving more established frames into the area, which bring their own resident fish populations to graze on the algae of the nearby problematic frames.

We have recently sighted several Crown of Thorns Starfish (COTS), which in large numbers can be devastating to coral reefs. The current population is well below “outbreak” densities (greater than one COTS per ten square metres) and we are simply able to relocate them away from our coral frame sites. (Although we have the necessary natural chemical and injection gun on standby, in case of a major population increase.) 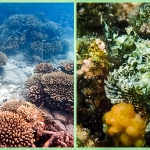 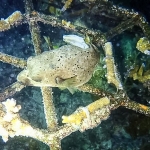 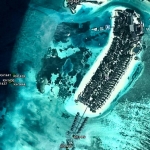 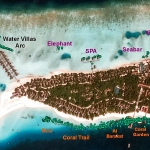 The coral fragments that we transplant onto the frames start to grow in just one week, and the cable tie has usually been overgrown after a month.
We have started a new experiment, to see how the corals grow in a controlled environment in one of our Fish Lab tanks. Here, the corals will be exposed to light but there will be no plankton present in the water for the corals to feed on. We are taking twice daily photographs, and plan to create a time-lapse film to witness in detail how the coral fragments grow and develop over time.

At Landaa Giraavaru, we are starting an exciting project to assess the populations of reef fish that have made a home in our coral frames.

There are various parameters for each of our 2300+ frames:
– Date of transplantation
– Shape/Size (Small, Medium, Large, Heart, Diamond, Square)
– Species of transplanted corals
– Location around the island (different marine environments)
– Depth

We plan to use a static GoPro camera to photograph and film a representative selection of coral frames from around the island. The collected footage can then be reviewed and analysed, recording data such as quantity and species of fish sighted, and whether individuals appear to be permanent residents or just transient.

We hope to publish a scientific paper in 2015, with answers to the following questions and more: