Members of the cartilaginous fish family Chondrichthyes (sharks and rays) have been global victims of heavy over-exploitation during the last one hundred years, with species diversity and population levels declining severely worldwide.

Starting in 2009, the Maldivian government implemented a complete ban on all fisheries that target shark species, which has led to the Maldives gaining the image and reputation of being an international shark sanctuary. Since atoll shark fishing was stopped (2009) and following the subsequent Maldivian territorial ban (2010), little research has been done, and it is currently unknown whether shark populations are increasing. 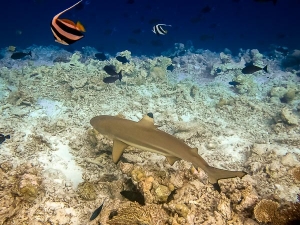 A government-initiated “Sharkwatch Programme” of incidental sightings has been in action since the start of the shark ban in 2009. This programme has collected a large amount of data over a short period of time, with 11,704 surveys being undertaken, recording 23,000 shark sightings.

However the accuracy of this data is variable, with no fixed transects, areas or times specified, so the results are susceptible to dive type, visibility and so on. Although the simplicity of the survey technique allows anyone to participate and increases the amount of data received, the accuracy will be reduced as participants may have no training or identification experience.

The aim of this study is therefore to test and undertake accurate and cost-effective survey methods in an attempt to quantify shark populations at a local level. The chosen species for this study is the Blacktip Reef Shark (Carcharhinus melanopterus), one of the most abundant apex predators on Indo-Pacific reefs, and commonly found in Maldivian shallow coastal waters (at depths of 1-10 metres). Thought to be depleted due to a combination of inshore fisheries and reef destruction, this species of reef shark has been classed as ‘Near Threatened’ by IUCN Red List.

The survey uses baited underwater video cameras (BUVs) planted at various sites around Four Seasons Resort Kuda Huraa (N.Malé Atoll). Each BUV consists of a simple cage, baited with fish carcasses and crab remains, and observed using a ‘GoPro’ camera attached to a metal frame.
The camera remained recording until the battery drained, capturing footage of any species attracted to the bait box during this time. The video recordings were analysed, and screen shots of all sighted shark species taken. These images were then cross-referenced to identify individual Blacktips, using their perceived length and visible body markings (dorsal fin and pigmentation patterns). Identification photos are being added to a database of ‘known’ sharks, to be used as a reference point for new sightings. We can then estimate the local population size at Kuda Huraa, and gather information on movement patterns and foraging ranges of these individuals. We hope to analyse all the data we collect, and present a formal paper for future use in studying shark populations in the Maldives.

We are pleased to welcome our new intern Glen Hampson to the Marine Discovery Centre at Kuda Huraa. Glen has recently graduated with a degree in Marine Biology from the University of Portsmouth, and is now looking to build upon his academic knowledge by gaining hands-on experience working as a marine biologist here with us at Kuda Huraa.
During the internship, Glen will be working on developing a shark population survey to study local populations of Blacktip Reef sharks (Carcharhinus melanopterus) using a variety of survey methods including underwater camera traps, and snorkel surveys. Glen has also been involved with both the turtle Head Start and Rehabilitation Programmes, performing feedings and administering medical care to all our resident turtles. In addition, Glen has taken an active role in guest excursions with responsibilities ranging from photographing species of interest, to giving presentations and talks to guests about marine life.
By the end of his stay, Glen is aspiring to compile an in-depth scientific report from the findings of the shark population surveys, which he is then planning to submit for publication to established journals and magazines in the scientific community. We are hoping Glen will be the first of many interns and employees to create published scientific research whilst working here at Marine Savers, Four Seasons Resorts Maldives. 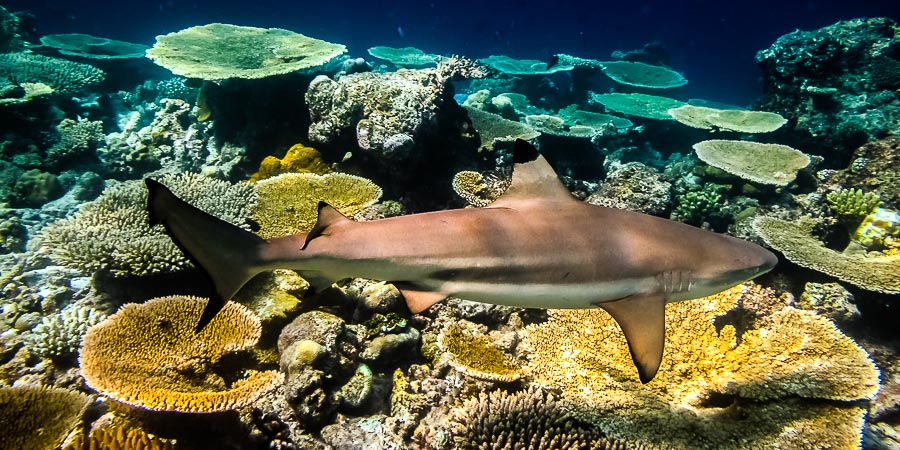