All three of the phytoplankton species that we have in culture (Nannochloropsis, Tetraselmis and Isochrysis) are growing very well, and we are expanding the production of Artemia to our large outdoor tanks.
Our Rotifers, however, have reduced in numbers, with both our 20 litre tanks suffering from growth of sulphur bacteria; we hope to start a new batch in the algal tank shortly, to ensure good enrichment and healthy growth.

This month also saw us start attempting to breed batfish (Platax teira) in captivity. Distinguishing between the sexes is difficult, so we caught a total of ten fish to ensure we have both males and females in the sample. We are feeding them a special mixture of minced fish and seafood, but only expect them to start spawning after three months or so. 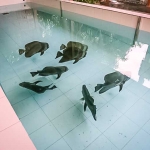 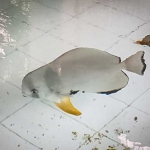 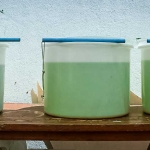 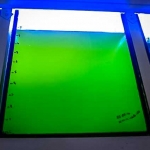 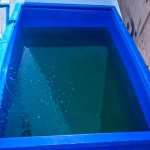 Our two marine aquaria at Kuda Huraa have been entirely cleaned and rebuilt, and we are slowly introducing new species whilst monitoring water quality and adjusting light levels.
Our Toadstool Mushroom Leather Coral (Sarcophyton species) was starting to show signs of bleaching, but decreasing the light intensity has enabled it to recover. Soft corals do not produce calcium carbonate skeletons but are still robust and can heal quickly if damaged, making them perfect for aquarium-life.
We also introduced the two species of Clownfish from Landaa – one species into each tank – and the Maldivian Blackfoot Clownfish (Amphiprion nigripes) has already started spawning. 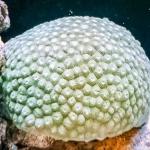 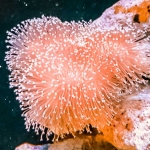 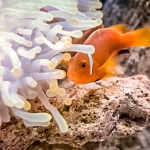 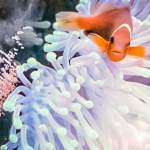 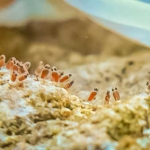 This month we set up our new camera trap on the house reef for several hours, in the hope of photographing some sharks. Although unsuccessful, we did obtain some good photographs of other interesting species including: 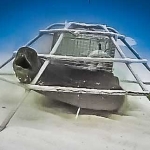 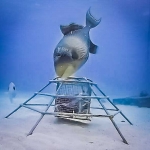 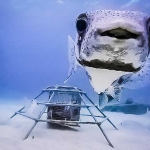 This month we attended a whale shark workshop at the Maldives National University in Malé, held in conjunction with the Maldives Whale Shark Research Programme (MWSRP). The agenda was:

There were some interesting facts about the whale shark population in the Maldives, including:

• 98% of recorded sightings in Maldives are of male whale sharks, but it is not known why.
• The average recorded whale shark length is around six metres.
• 67% of the sighted animals have visible injuries, likely caused by boat (propeller) strikes.
• The whale sharks identified in Maldivian waters have not been sighted in any other parts of the world.

Shark Watch was launched in 2009, after the closure of reef shark fisheries, to collect baseline information on shark abundance in Maldivian waters. It has been the primary tool used to assess the status of fish stocks and monitor the effectiveness of the fishing ban which was extended to all shark fisheries in 2010.

The programme has just finished its fourth year of data collection and this month released an overview of its findings from 2009-2013. There have been a total of 11,700 surveys at 540 different sites around the country, representing 8,200 hours of search time, during which almost 24,000 sharks were recorded. Although the surveys are conducted throughout the Maldives, the majority of the data comes from the central atolls. 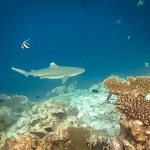 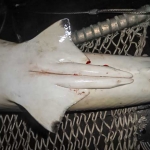 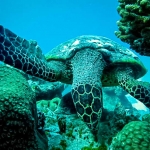 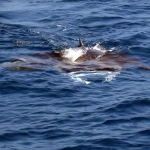 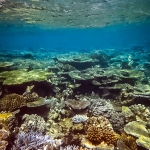 We have observed a decrease in underwater visibility this month, due in part to an increase in the populations of oceanic plankton. Microscopic planktonic plants and animals are defined by their inability to swim against currents, and provide a crucial food source for a number of large animals such as whale sharks and manta rays.
Blacktip reef sharks (Carcharhinus melanopterus) were the most-sighted mega-fauna species recorded for this month, with individuals being observed on each of our guided snorkelling trips. Other sighted species included :

On one trip, we were lucky to spot possible mating behaviour, as a group of seven adult blacktip reef sharks were seen pursuing one individual. This is only the second time this has been observed by our current team, and was perhaps triggered by the new moon phase on 27 June. Sexually mature males have a pair of claspers between the pelvic fins (whereas these are absent in females). This event has been recorded and we will look out for any sharks with fresh mating scars on upcoming safaris. Perhaps we will even see some juveniles in the area after the gestation period is over (eight to ten months).

At this time of year, the monsoonal winds from the North West are producing larger, long-distance waves. This results in less than ideal dolphin-spotting conditions, but we still observed a total of 430 spinner dolphins (Stenella longirostis) this month. We witnessed some impressive acrobatic displays as they jumped from the water, and even caught sight of some mating behaviour. Other cetacean sightings included short fin pilot whales (Globicephala macrorhynchus) and bottlenose dolphins (Tursiops aduncus). Our new handheld GPS unit will allow us to accurately pin point where and when cetacean encounters have occurred, to help improve our knowledge of the local populations.

This month we received a reported sighting of dense blooms of copepods, a small crustacean that feeds on phytoplankton and which is a major constituent of the diet of several large marine species. So on 28 June we set sail to an area outside the atoll, to search for any reef manta rays (Manta alfredi) that might have been attracted by the blooms. As it turned out, we only sighted a single manta ray (from the surface), but had the added bonus of sighting a hawksbill turtle and a whitetip reef shark (Triaenodon obesus). 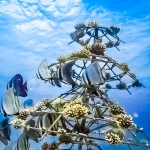 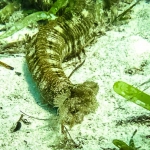 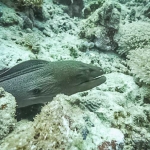 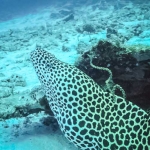 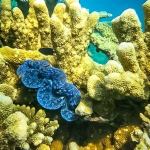 Snorkel Adventure – clam on the reef