This year we attended the Annual Beach and Reef Clean up event, held on the local island of Villingili (close by to Malé). There were various events and awareness programmes and over 1,000 people of all ages enjoyed the day.
We joined in with the awareness programmes alongside Ecocare, The Marine Research Center, The Environment Protection Agency and the Ministry of Environment.
There were also stalls from Villa College and the Maldives National University, where students could gather information on the various environmental study opportunities available in the country. 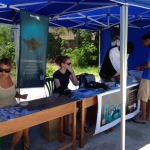 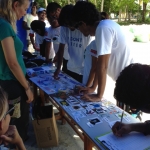 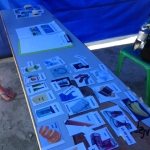 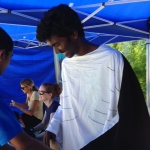 Nao is our Hawksbill turtle found on 3 May by the the marine biologist at Gili Lankan Fushi (see below). We think she may have ingested some debris, causing an intestinal blockage leading to positive buoyancy or ‘floating syndrome’. Whilst at our turtle rehabilitation centre, we ensured she was hydrated and gave some laxatives to try and remove any blockage. Thankfully this seemed to work, and soon she was feeding well and starting to dive to the bottom of the pool.
The release on 23 May went well, with Nao taking a little time adjusting to the open ocean before diving down and swimming away. A great success! 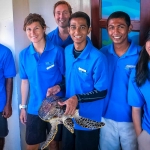 Nao poses with Seamarc staff at Kuda Huraa MDC (May 2014) 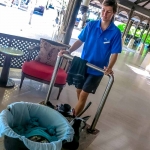 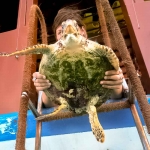 Release from our boat 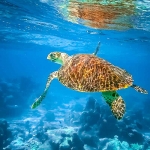 There are 80 different species of parrotfish, with 23 species found here in the Maldives. Because of their large size (up to 90cm) and bright colours (often turquoise and green), they are among the most noticed fish on the reef. Sometimes you can hear the parrotfish grazing on the coral with their strong beaks; watch closely and you will also see sand particles being excreted afterwards. Their diet comprises of algae, sea grasses and invertebrates, including coral polyps.
Parrotfish often swim along the edges of the reef, and can travel over considerable distances between feeding sites during the day and resting places at night. The two sexes are often different colours, and their colour can also change dramatically as the fish matures.
We can see a variety of different parrotfish in and around the house reef here at Landaa Giraavaru. Recently our team found a juvenile Bicolour parrotfish (Cetoscarus bicolor), and we are currently housing him in our Fish Lab – pop by and say ‘hello’ ! 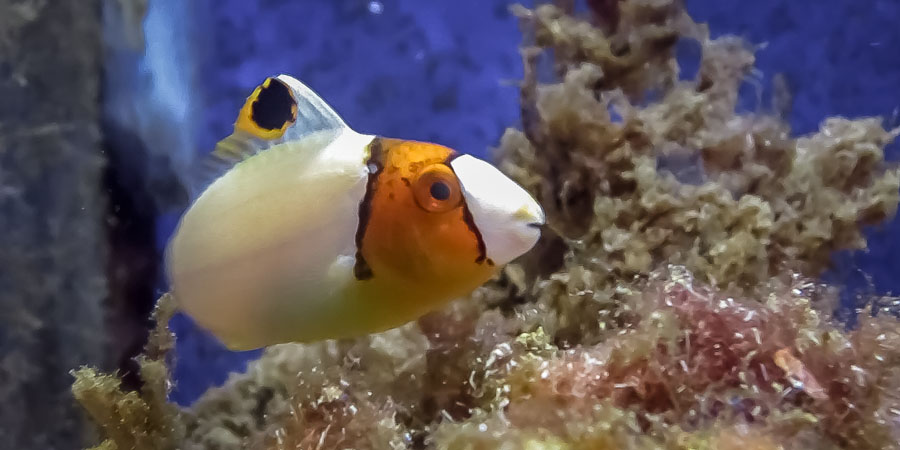 This year we attended the 2014 Maldives Marine Expo (17 – 19 May) on the island of Hulhumalé, organised by the Liveaboard Association of Maldives.

The aim was to increase awareness about our environmental projects, alongside our colleagues from the Manta Trust, IUCN, Six Senses, Marine Research Centre and the Whale Shark Research Project. 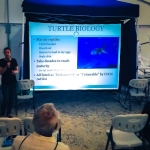 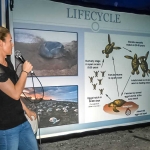 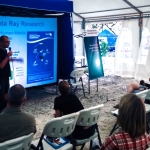 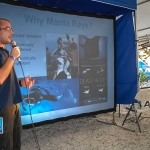 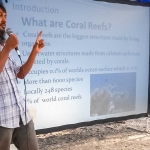 What Are Coral Reefs ? 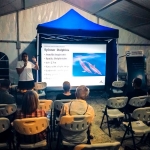 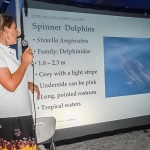 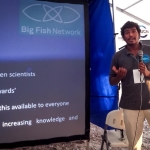 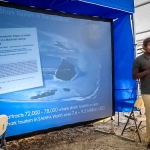 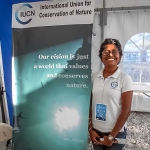 This is beachcombing with a difference ! Some of our Marine Biologists joined a group of staff volunteers on an intrepid outing to clean a nearby ‘picnic’ beach.

Some islands are prone to getting discarded garbage washing up on their beaches, especially during high tides or periods of bad weather. It’s a simple enough job to collect the flotsam and jetsam, but one that turns into an every day task if the beaches are to be kept in the pristine conditions that you find on the resorts.

Thought for the day : One of the greatest threats to our environment is waste and our attitude towards it. Something as simple as a plastic bag is used for several minutes, but if discarded irresponsibly can go on to spend a lifetime in our environment and even act as a killer. Plastic in particular can remain in the environment for long periods of time, and is often unwittingly eaten by animals causing their suffering and possible death. Discarded cigarettes are known to be ingested by various marine animals. They absorb water and swell in size, giving rise to a satiated sensation which can eventually cause the unsuspecting animal to starve.

The recycling message is a simple one : when we choose to consume something, consider the impact it has on the environment.

Enjoy our Hanifaru beach cleanup photos, as we restore paradise … and there’s no need to get your hands dirty !

If you are lucky, you might spot a Blacktip Reefshark in our lagoons – they are timid creatures, can swim very fast and are tricky to capture on film ! So well done to Mirufaag Abdulla (our Four Seasons apprentice) who did a great job here.

3rd May – ‘Nao’ the Hawksbill Turtle

Today we welcomed ‘Nao’ to our centre at Kuda Huraa. It is a large Hawksbill turtle, sent to us by our colleague Vidas, the marine biologist from Gili Lankan Fushi who found it drifting on the surface. We think it might be suffering from digestive issues, perhaps after ingesting floating debris, so we have been administering laxatives. Its condition seems to be improving, so we we hope to release it soon. 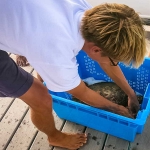 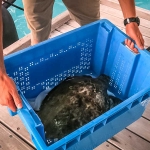 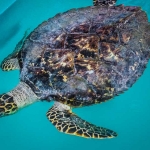 Nao the Hawksbill turtle in our recovery pool

Enjoy this short 2 minute video clip of our turtle releases this month, as we wish bon voyage to ‘Naushad’ and ‘Coco’. Thanks to Nicolas at Landaa Giraavaru for his great work at putting this video together.