[O]n the night of 9 April our marine biologists were lucky enough to witness an incredible once-a-year event on our coral reefs – the annual mass coral spawning!

In the Maldives, this event normally happens over a period of a few days in March or April, but it is very difficult to predict the exact date that it will occur. The corals take cues from the weather, tide, water temperature and moon phase before releasing a chemical signal in the water that triggers colonies of certain species to release their egg and sperm bundles (gametes) simultaneously around 2-3 hours after sunset (about 8:30pm here in the Maldives). Expelling these gametes en masse increases the likelihood of successful fertilisation. Often, different species will spawn on different nights to prevent hybrids from being formed. The gametes will float to the surface where, if they can avoid being eaten, they will meet and fertilise a larval coral called a planula. The planula can float in the ocean for several days before settling on a new reef, where it starts to bud and develop into a new coral colony. 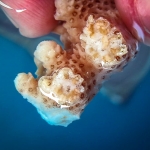 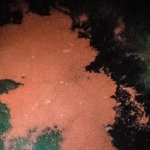 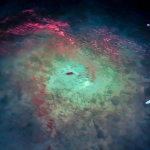 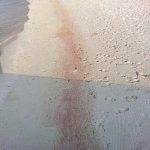 Coral Spawn washed up onto beach at low tide 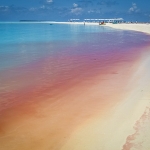 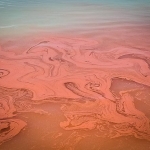 [R]ising water temperatures over the last few months in the Maldives have triggered the maturation of the gametes. The gametes are usually pink or red, and have been observed by our coral biologist inside the skeleton of several Acropora species over the last 10 days – letting us know that the corals were getting ready for the big event! After they’re released, the buoyant gametes form floating pink slicks on the surface of the water, much to the enjoyment of the other residents of the reef, who come in for a feast! The timing of the spawning a few hours after sunset ensures that most plankton feeders are asleep, which gives the coral planula more chance of survival. The biggest residents of the reef – the manta ray and the whale shark – often come into the atolls after a spawning event!

Coral spawning does not happen at the same time all around the world. The mass spawning events in the Caribbean usually occur in August/September, whilst on the Great Barrier Reef it happens in November/December.

Around the Maldives, slicks of eggs have been noted by other marine biologists from North Male and Ari atolls on various days since 4 April. Spawning was seen at Kuda Huraa on 9 April (21:00hrs); whilst at Landaa Giraavaru, we had observed eggs within the corals since 9 March, initially in Acropora secale and Acropora gemmifera, and then other Acropora and Pocillopora species towards the end of the month.