Life & Death at the Fish Lab

[W]e have some sad news to share this month; when we arrived at the Fish Lab on the morning of 20 February, we were shocked to discover around 1,000 of our clownfish had died overnight. Almost all our lab-bred juveniles were found dead in their tanks, from both species – Clark’s (Amphiprion clarkii) and Maldivian Clownfish (Amphiprion nigripes).
The tragedy was apparently caused by an overnight electrical shortage, which damaged one of our main supply pumps leading to a failure in the water circulation system.

[L]ast month we decided to evaluate the effectiveness of several commercially available aquarium fish foods. To facilitate this, we separated one of our 100L grow-out tanks into three sections and introduced 120 clownfish juveniles into each. By supplying a different food type into each of the sections, we were able to monitor the growth rate and colouration of the juvenile fish over several weeks.

After less than a month we could see that our normal diet (special blend of fresh-frozen fish/shrimp/mollusc) was giving the best growth rates when compared to the packaged Calanus foods (a zooplankton copepod). In addition, the commercial preparations were more powdery and more likely to create additional waste which settled at the bottom of the tank, encouraging the growth of cyanobacteria as a green layer. 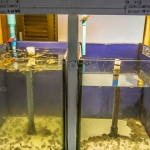 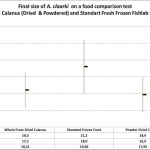 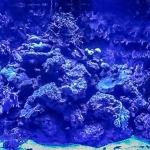 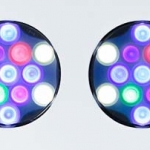 [W]e recently upgraded the old metal halide lighting in our large marine aquarium to a new LED system. This uses much less power and can simulate natural daylight under varying weather conditions, to encourage the growth of our soft and hard corals. The system can be programmed to automatically adjust throughout the day, and illuminates the marine life in a very effective and striking way. An interesting feature is the ability to highlight the natural fluorescence of our corals – something that is normally invisible to the eye – and we hope to incorporate this into our Night Snorkelling presentations in the near future.

We extend a warm “thank you” to the generous team at Aquaillumination for kindly donating their hi-tech lighting system.

Thanks to Magali and the whole team for sharing this fantastic set of underwater photos, taken on dive and snorkel safaris from the Four Seasons Explorer over the past few weeks. 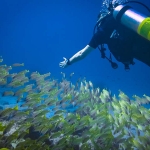 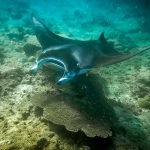 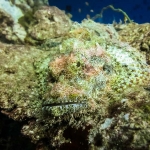 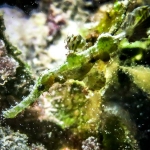 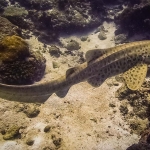 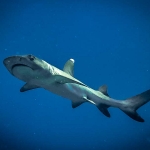 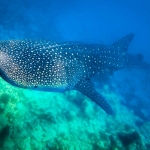 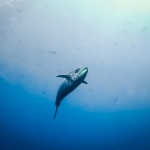 Tuna in the deep blue 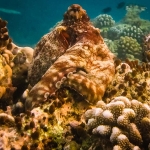 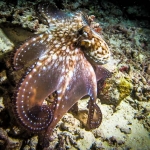