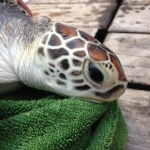 “Coco” was being kept as a pet on a local island, but had outgrown his home so was handed over to our turtle rescue team at Landaa Giraavaru.

We will keep Coco here for a few weeks so he can develop some strength for swimming in the deep water of the ocean!

Ask any of our MDC staff for the latest news on his progress.

The hypnotising movements of a swimming flatworm (Thysanozoan nigropapillosum) spotted on a night dive. Thanks to Magali, our marine biologist stationed on the Four Seasons Explorer, for sharing this with us.

Thanks to Markus for this captivating video, taken on a night dive from the Four Seasons Explorer liveaboard – here are just some of the unusual marine creatures you might encounter.

Alea has been feeding well and is visibly stronger, so we attempted to release her back into the ocean today. Unfortunately this was not successful as her front flippers must still be painful following her entanglement in the ghost netting. However we are pleased to report that she is feeding well and becoming stronger, so we will closely monitor her progress and hope to release her soon.

Early this morning, we rescued a turtle that was found trapped in a ghost fishing net inside the lagoon at Kuda Huraa. A big thank you to our two guests John and Dacia Sciarrone from Hong Kong, who spotted it whilst out kayaking, and helped the recreation team transfer it to the Marine Discovery Centre.

‘Alea‘ is a 53cm female Olive Ridley turtle, showing lacerations around both front flippers caused by the netting, and signs of rope abrasion on her shell. She is also suffering from the familiar ‘buoyancy problem’ (unable to submerge), but apart from this appears to be in good health. 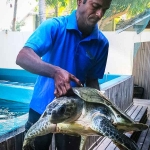 Moving Alea to the rehab pool 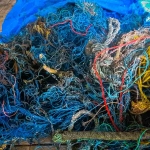