[I]n January we saw a total of 13 spawns here in the Fish Lab – four spawns from our Clark’s Clownfish (Amphiprion clarkii) breeding pairs and a further nine spawns from the Maldivian Clownfish (Amphiprion nigripes).
Our new project this month is to feed various commercially available food types to the juvenile clownfish, and see which offers the best results in both speed of growth and skin colouration. We have divided our 100L grow-out tanks into three equal sections and introduced approximately 120 clownfish juveniles (~40 days old) into each. We will continue to feed a different food type to each of the three populations throughout February, and assess the results over the coming weeks. 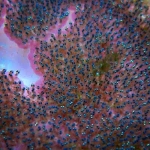 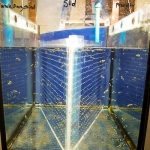 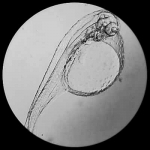 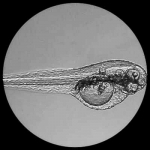 [O]n a trip early in the month, we encountered large clumps of Sargassum seaweed floating in the ocean and successfully recovered a female seahorse and a breeding pair of frog fish (Histrio histrio) to take back to the Lab. By the end of the month the frog fish had spawned – we first noticed a floating ‘egg raft’ in our tank, which four days later hatched into hundreds of tiny larvae (microscopy photos, above).

2014 has got off to a good start for our resident seahorse breeding pair, as we saw two births this month and now have approximately 130 juveniles. Here we see a juvenile in our tank, hunting for the live shrimp food that we provide daily.

[W]e have seen lots of dolphin activity this month, with Thulusdhoo Channel and Club Med being reliable areas for spotting pods of up to 70 spinner dolphins. They were often very active at the surface, providing an impressive show of jumping into the air, and we were also fortunate to observe courtship rituals and mating behaviour on two of the excursions.

On 8 January we were treated to an incredible sight – a pod of around 100 Pilot Whales near Dhonveli Channel. We were also lucky to observe some “spyhopping” behaviour, when the whale holds itself vertically, head out of the water by kicking its tail fluke – sometimes for up to several minutes at a time! This is similar behaviour to a human “treading water” and is thought to happen when an inquisitive whale wants to see what is happening above the water surface. 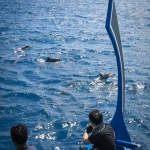 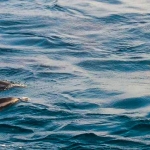 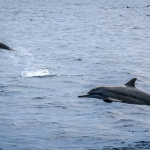