Conceived in conjunction with The Manta Trust – the world’s leading manta ray charity – and escorted by its founder and world-renowned manta expert Guy Stevens, the two all-inclusive seven-day expeditions will immerse guests in every fascinating aspect of the Trust’s research and conservation efforts.

The expeditions will take place on August 21–28 and September 11–18, 2014, dates identified by The Manta Trust as being peak sighting periods due to the southwest currents moving large quantities of plankton through the Baa and Ari Atolls, attracting manta rays and whale sharks from all over the Maldivian Archipelago. In addition, each exclusive expedition route will take daily climatic and environmental factors into consideration to maximize guests’ chances of successful encounters.

With manta rays and whale sharks feeding at the surface of the ocean, each expedition is suitable for divers and non-divers alike. And as honourary researchers, all expedition participants will be encouraged to engage in every aspect of the conservation experience: learning how to free dive and take ID photos; contributing to data collection; helping record critical environmental information; participating in workshops and even naming any mantas new to the Trust’s database.

In short, participants will come away having made a valued contribution to this thrilling area of study, while enriching their personal knowledge and appreciation of the Maldives’ magical marine life in the presence of leading oceanic experts.

Commenting on the expeditions, The Manta Trust’s Founder and Chief Executive Guy Stevens said, “The Maldives is one of the best places in the world to study these fascinating creatures due to its large manta ray and whale shark populations, and there’s no finer vessel than Four Seasons Explorer to embark on that journey. Education is the most important step in achieving environmental protection, but we hope these expeditions also showcase the fun and excitement that can be experienced along the way.” 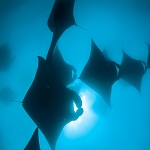 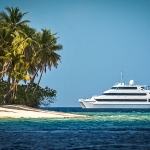 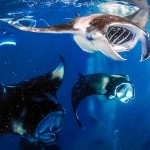 Four Seasons and MMRP (founding project of The Manta Trust)

Based at Four Seasons Resort Maldives at Landaa Giraavaru since 2006, The Maldivian Manta Ray Project (MMRP) is one of the world’s longest running manta ray research and conservation initiatives. It is also the founding project of The Manta Trust – the world’s leading manta ray charity – established to co-ordinate global research and conservation efforts for manta rays, their close relatives and their habitats. Thanks to the work of the MMRP at Landaa Giraavaru, the Maldivian manta ray population is one of the most intensely studied in the world, placing it at the forefront of international manta ray research and conservation: most notably, the successful 2013 listing of manta rays on Appendix II of the Convention on International Trade in Endangered Species (CITES). In addition to collecting data on the manta rays it encounters, MMRP also studies environmental and climatic factors, as well as tourism and human interactions, contributing vital knowledge to global research efforts.