November Updates From Our Fish Lab

During the month of November, one of our breeding pairs of Clark’s Clownfish (Amphiprion clarkii) finally spawned … and not once but twice! Happy occasions that we’ve been waiting many months for! Meanwhile, our Maldivian Clownfish (Amphiprion nigripes) have spawned a total of seven times this month, so we are swimming in juveniles at the moment!

Our seahorses gave birth twice this month, but the numbers of babies has gone down (20 juveniles in the first batch and 25 in the second). We are continuing to experiment with different feeding methods, but unfortunately none of this month’s babies survived. Our recent juveniles, however, remain very healthy and are growing day by day. 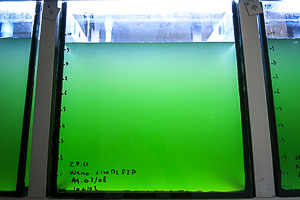 successfully growing our stock of phytoplankton culture (Nannochloropsis) and now have 600 litres of the algae in our tanks. We plan to use this as food to grow copepods (a type of zooplankton that is smaller than Rotifera) that will in turn become food for our seahorses and fish. We have ordered additional lab equipment from overseas to expand this project into a variety of other species, namely Tetraselmis suecica (algae), Isochrysis galbana (micro algae) and Chaetoceros calcitrans (diatoms).
We have also been experimenting with a different fertiliser for our Artemia, but unfortunately this seems to have stopped them growing to maturity and they have been dying out. Further experiments are underway.

Earlier last month we spotted an unfamiliar creature living in the lagoon and brought it back to the Fish Lab for identification. At first glance, it looks just like a piece of floating sea grass complete with fine roots, but on closer inspection it actually has the head of a seahorse!
Based on appearance, it might be a type of pipe fish or even a sea dragon, both members of the Syngnathidae seahorse family, but we weren’t able to establish positive identification before releasing it back into the ocean. If anyone knows what species this is, please do get in touch (or leave a comment below).

Updates
We sent some of our photos to renowned marine biologist Charles Anderson for his opinion, and this is what he told us –

It is a juvenile pipefish … Almost certainly Trachyrhamphus bioarctatus, the Double-ended/Stick/Bent-stick Pipefish. The young are planktonic, and in this late post-larval stage have well-developed dermal appendages, which are believed to assist with flotation.

Thanks for your help, Charles! (Read his TED profile here – “Charles Anderson: Dragonflies that fly across oceans”)

We have also been in contact with marine researchers from The University of British Columbia in Vancouver, Canada, who welcome submissions of seahorse (and Syngnathidae family) sightings at their iSeahorse website or using the iPhone app iSeahorse Explore.