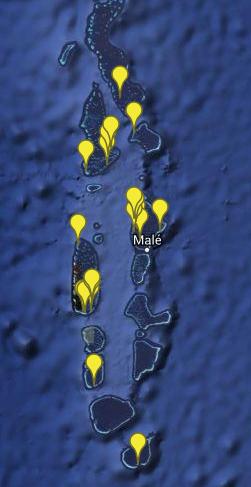 Map of Maldives, pinpointing the participants in our Turtle ID Program

[A]ll seven species of sea turtles found worldwide are listed as threatened by the IUCN Red List. Five of them can be seen in Maldivian waters, with the Hawksbill turtle and the Green turtle being the most commonly sighted species. Among the major threats to sea turtles, egg and meat poaching and entanglement in marine debris remain the most important causes of the observed nationwide decline in populations over recent decades.

Although all species of turtles have been protected by law in the Maldives since 1995, little information is available about their population numbers. Our Maldivian Sea Turtle Conservation Programme started in 2011 and aims to create the first Maldives-wide photographic database of sea turtles in order to study population dynamics, migrations and habitat use. Photographs taken by marine biologists, divers and tourists alike can help us understand the movements of sea turtles.

– We are currently surveying 116 sites around the Maldives for Hawksbill and Green turtles.
– 3 atolls (Baa, N.Male, and Ari) are very active, and we now have new sightings coming from Dhaalu, Laamu and Raa atolls.
– We identified a total of 159 turtles this month and now have over 1165 sightings in our database!
– 63% of the turtles identified this month were new – never previously photographed or catalogued by us.
– The total number of turtles in our database is currently 541 Hawksbills and 65 Greens.
– This month we welcomed five new participants to the programme: Baros Resort, Huvanfenfushi, and Taj–Vivanta in N.Malé atoll; Vakarufalhi (Ari atoll); and Niyama Resort (Dhaalu atoll). We also have interest from a number of other resorts and are awaiting their first ID photos.

[O]n 4 November, the Marine Discovery Centre at Kuda Huraa hosted a Sea Turtle Workshop. Eleven participants attended, comprising marine biologists and dive centre representatives from seven different resorts across North and South Malé atolls. We gave a presentation on our turtle conservation efforts, held informal discussions about our various projects, and conducted a tour of our rearing centre facilities. We were also able to increase our network of contacts and promote awareness of our key work areas, namely (1) turtle identification, (2) turtle nest protection and (3) ghost netting.

(1) The methodology of turtle photo identification in understanding the population and movements of sea turtles both within and between the atolls. During this discussion, we explained the importance of obtaining quality facial photos of the turtles, so individuals may be identified using profile coding and our ID database. Information is shared in the Maldives Turtle ID Facebook group and via a monthly progress email report.

(2) The promotion of our turtle nest protection project and our work with the local island communities (including poaching education and awareness). We discussed our desire to expand these ideas to other resorts so they may continue the responsible rearing and releasing of turtle hatchlings. We also asked for nest details to be shared to increase our knowledge base, including nest location, time and dates, turtle species, number of hatchlings and number of unhatched eggs.

(3) A review of our turtle rescue and rehabilitation techniques. We also raised awareness of our Ghost Net Project (page here), and gave a detailed tutorial on net parameter measurements so these may be shared with the Olive Ridley Project FB group.

We received much positive feedback from the workshop and would like to thank all of our attendees for their invaluable contributions. We plan to conduct further workshops in other atolls in the future, so if you are interested in organising or participating in a workshop, please get in touch! 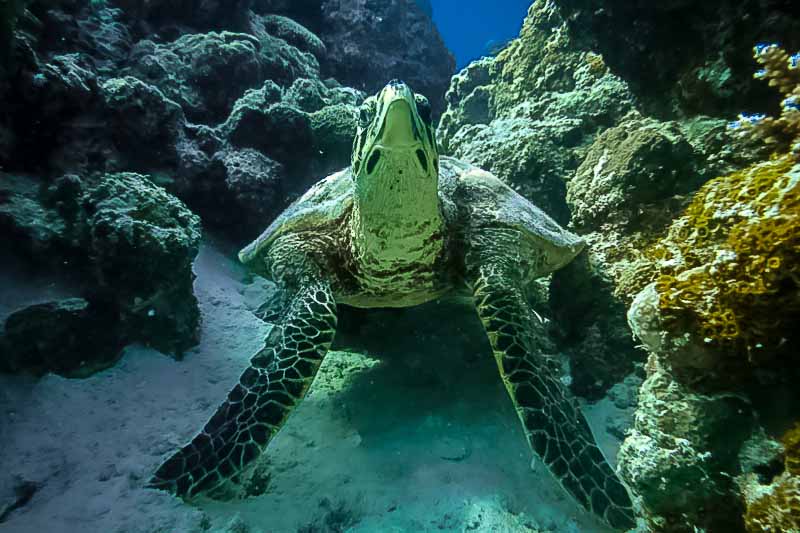 • We are currently surveying 126 sites around the Maldives for Green and Hawksbill Turtles.
• We identified a total of 128 turtles this month, 78% of them new to our database.
• Thanks to Zoe at One and Only Reethi Rah for submitting over 700 sightings of turtles from the last 2 years!
• 3 atolls (Baa, N.Malé, and Ari) are very active, with new sightings now coming from Dhaalu, Laamu, and Noonu atolls.
• First database entry of a loggerhead turtle – spotted and photographed in the Lagoon Nursery at Niyama Resort – thanks, Judith
• One new participant to the programme: Velaa Private Island in Noonu atoll.
• We discovered for the first time that Hawksbill Turtles are moving between White Sands and Dhigurah (in Ari Atoll). 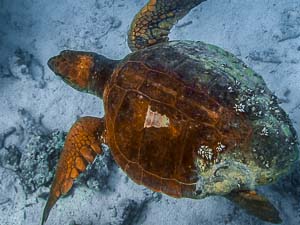 First Loggerhead turtle in our database

[T]his month we made a trip to Finolhas – a site we used to visit frequently but that is now under construction as a new resort. We discovered that many turtles still use this reef despite the construction activity, and we were able to take several ID shots:
– One turtle was positively identified as HK21 from Dhonfan, who hasn’t been photographed since October 2011!
– A second turtle turned out to be HK247 (‘Simbe’) – a male hawksbill previously sighted some miles away in Madhirivaadhoo in February 2013.

• We identified 367 new Hawksbills and 40 new Green turtles.
• The current totals in our database are 641 Hawksbill Turtles and 67 Green Turtles, with 1982 total sightings.
• The project expanded from surveying just two atolls to surveying ten atolls across the country.
• More than 800 new ID photographs were taken by our participants in 2013. 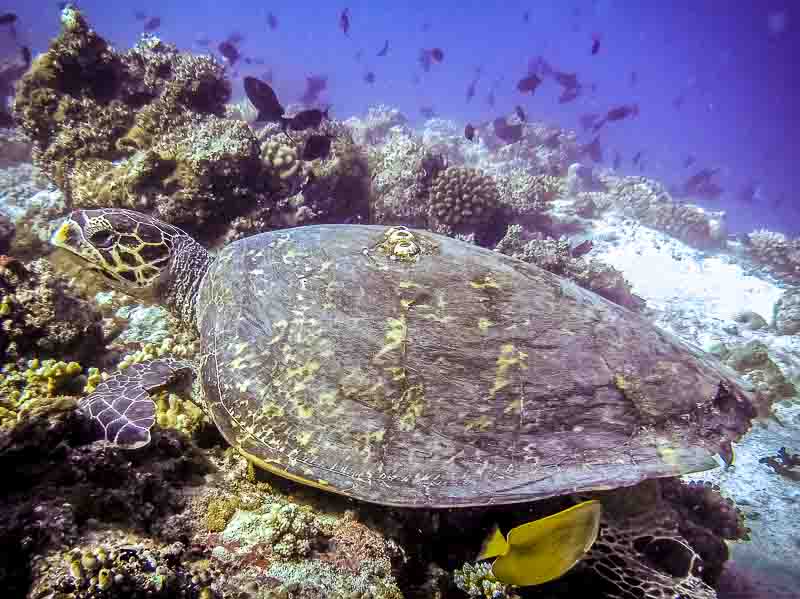 [W]e are always on the lookout to increase our network of contacts in all atolls across the Maldives, especially in the extreme North and South of the country. Contact us if you would like to participate in any of our turtle conservation projects, and please help spread the word to other interested marine biologists and local environmental groups.