[T]he coral nursery frames are growing well in the channel, and this month we added three new frames and two new species to our nursery. The idea of the nursery is to grow a readily sustainable source of new coral fragments, thereby reducing the impact on the older frames and the house reef itself. Once these frames have had a chance to mature and grow we hope to use them as the source for all our future coral frames.

Furthermore, an interesting discovery was made this month: we spotted a small area of the rarely seen coral species Seriatopora growing on the house reef. This species used to be a common sight on the reefs around Kuda Huraa, but has rarely been seen since the El Niño global climate event of 1998. To help re-establish this species we have harvested some small fragments and transplanted them to a new frame in the channel area. If all goes well and the corals successfully establish onto the frame, we will be able to use them to propagate to other frames. 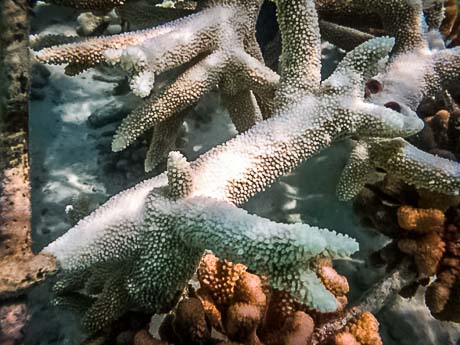 [W]e have started to see signs of coral bleaching on the reefs and on our frames this month. As the drier monsoon period comes to a close, the prolonged hot weather has led to an increase in the water surface temperature (up to 30-31°C has been common). The corals have also been exposed to more sunlight due to the lack of cloud cover – this causes stressing, and a reduction in symbiotic algae leads to the characteristic pale colouration known as ‘bleaching’.

We perform our coral watch every three months, and each time we study the same species at the same locations. We hope to observe how the colour of the corals changes during the course of the annual climate cycle, and we can see if this relates to any environmental events. All the corals appear to be healthy, but as expected for this time of year some pale and partial bleaching has been observed on both the natural reef and on the frames, especially in the shallower areas (<2m). The two species showing most bleaching seem to be Acropora robusta (photo, right) and Acropora hemprichii. But with the imminent arrival of the rainy season, ocean temperatures will fall slightly again and the symbiotic algal populations will be restored.

[T]his month we made a new frame with the Kuda Huraa apprentice class of 2014. In the first week of their time here the whole class came down to make their very own coral frame. The frame has been placed out on our House Reef and the apprentices will be able to follow its growth – alongside their own personal development – during apprenticeship training. 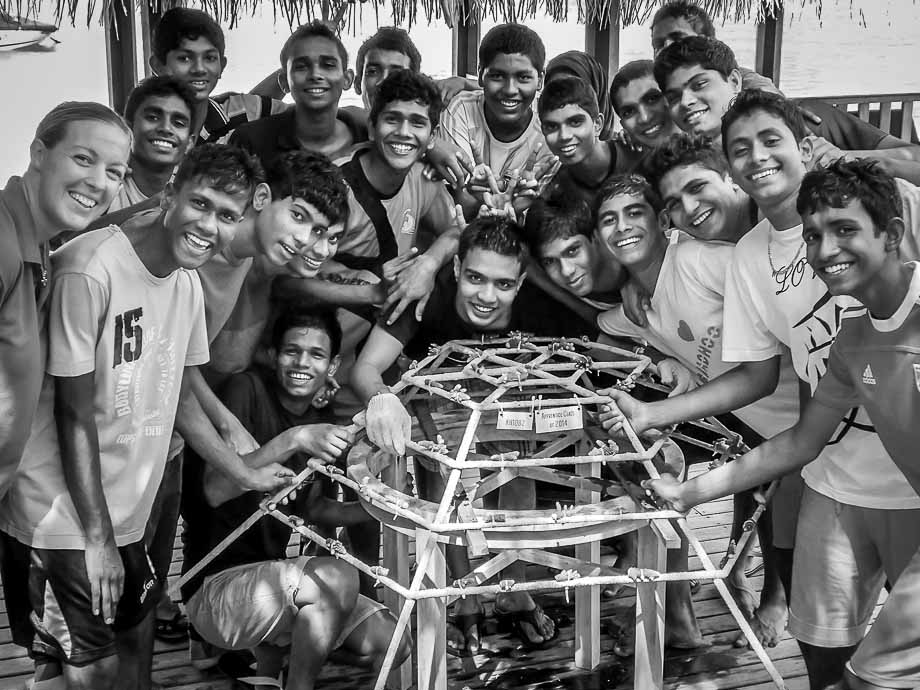