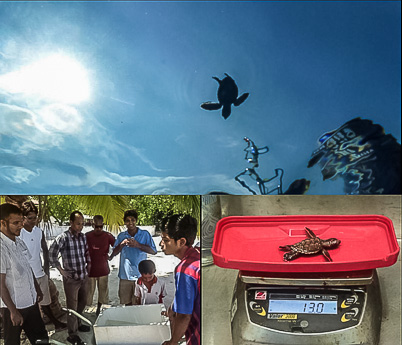 Six Hawksbill hatchling turtles were found by Kihaadhoo’s school principal on the 8th March. After being collected, measured and weighed by our marine biologists, the six newborns were released into the ocean channel between Landaa and Voavah. This is only the second batch of Hawksbill hatchlings in Baa atoll that has been reported to us this year.

On the 24th of March, one juvenile Olive Ridley turtle (60 cm in carapace length) was found during a sunset fishing trip, entangled in a “ghost” net, drifting in the channel between Voavah island and Landaa Giraavaru. The turtle was brought up on the Marine Discovery Centre whaler, cut free from the net and immediately released back into the sea – as the lacerations displayed on its fore-flippers were minor, and no buoyancy issues were observed. It is the second Olive Ridley we have found entangled in a fishing net in Baa Atoll so far this year.

The turtles we rescue are often seen to have problems with their buoyancy (flotation) – they only swim on the water surface, have difficulty in submerging themselves and are even unable to dive down for food.
There can be various causes for this:
– Neurological problems (internal ear problem)
– Lung infection
– Spinal injury
– Gastrointestinal tract gas due infection/obstruction
– Leakage (tear) from either a lung or the GI tract resulting in accumulation of air in the coelom (body cavity)

Three of our current patients – Bobita, Elisa and Zahiya – have been suffering from severe buoyancy problems for a long time (up to 12 months) and have not shown any signs of improvement. After discussion with professional marine veterinarians from Volusia Marine Science Center in Florida, it seems that our turtles are likely to have accumulated air in their body cavities. A typical approach in the treatment of this common problem consists of tapping air out of the coelom (fluid-filled body cavity) using a syringe inserted in between the rear flippers and the plastron (shell underside). The turtle is angled sideways, with the head inclined slightly downwards, and then any air is removed.

We have performed this operation on our three patients this month and obtained promising results, removing in total between 1.4 and 2.5 litres of air from each turtle. The results obtained on Bobita are really encouraging since her body now remains half submerged in the water. The two other turtles are also displaying signs of improvement, so we will continue to practise this operation on a weekly basis.