November 2012 saw us say goodbye to Chippy, who had been with us since July. Chippy is Landaa Giraavaru’s fourth turtle to be released with a satellite tracking device – a mature female Olive Ridley (68 cm carapace) who was found entangled in a fishing net and had to have one flipper amputated.

A film crew filmed Chippy’s release on 8 November to highlight Four Seasons conservation projects. Thanks to a generous donation from a guest, we were also able to equip her with a satellite tag.

Soon after releasing Chippy, Landaa’s turtle rehabilitation centre welcomed Bobita – an adult female olive ridley turtle who had been under the care of the Kuda Huraa team for four months having been found floating near Kandooma in South Male atoll on 3 August. Bobita was transferred to Landaa to give her more space to swim around in an attempt to overcome her ongoing floating syndrome. We wish her all the best for a speedy recovery. 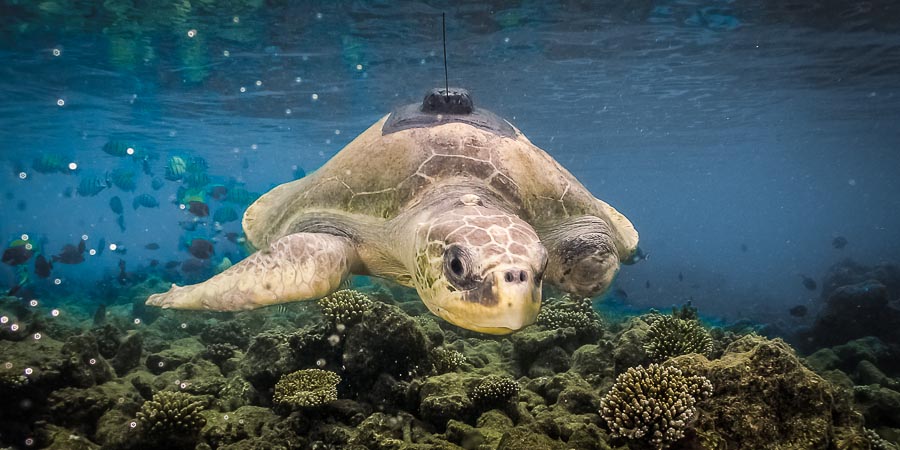 With a carapace measuring 71cm long, Samsy is the biggest – and probably the oldest – Olive Ridley turtle to be rehabilitated in Landaa Giraavaru’s Turtle Rehabilitation Centre.

Samsy was rescued from entanglement in a fishing net at Fulhadhoo (South of Baa Atoll) and brought to Landaa on 10 December 2012 suffering from minor laceration and buoyancy problems.

After a week under the care of our marine biologists, she was released back into the ocean equipped with a satellite-tracking device – the fifth tagged turtle to be released from Landaa. In the first day after her release, she had already travelled 61 kilometres north of the island!

You can now follow our tagged turtles on 2 satellite tracking maps – (1) for Landaa Giraavaru and (2) for Kuda Huraa.