Why do corals get diseased?

Just like humans, corals can get diseases, and just like humans, their sensitivity to disease increases stress. With intense mass coral bleaching happening in the Maldives (April-May 2016), we’re unfortunately seeing more and more diseases around our reefs. Here’s a short article that presents the most common diseases – what they look like, what they are, and how harmful they are for our reefs.

Diseases are caused by microbes such as bacteria, ciliates and viruses. External stressors such as abnormally warm temperatures have the double effect of weakening corals’ defences and increasing the activity of some disease agents. Coral breakage from storms or snorkel fin kicks can create injuries that may serve as an entry point for pathogens. Diseases affect many different species of corals and when present in unusually high numbers (“outbreaks”) they can kill a lot of corals and alter reef community structures. Recognising and documenting diseases is very important so we can better understand the threats to our reefs.

How to recognise diseases?

Unlike coral bleaching, where the coral tissue turns completely white but is still present, diseases are characterised by the absence of living tissue, exposing bare coral skeleton as it progresses. Some diseases such as the “band diseases” are easy to recognise as they form an “advancing coloured band” on coral colonies. Others, like “white syndrome” are much harder to recognise.

Diseases are easily wrongly diagnosed as predation by fish or corallivores (e.g.: Crown of Thorn starfish, Drupella snails) that also leave bare skeleton behind. The scars created by coral-eaters are static, however, while coral diseases typically progress, slowly eating away the living coral tissue. 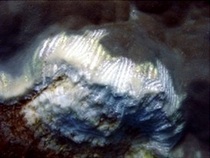 Grazing Parrotfish leave distinct scars on the coral skeleton.
Non-uniform margin after a Crown of Thorns starfish (COT) has fed on a plating Acropora coral. COT and Drupella snails leave serrated non-uniform margins (while a disease front is usually quite uniform). 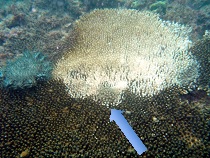 White syndrome disease – characterised by a diffuse pattern of tissue loss usually creating a gradient of colour from bare white at the disease front to pale brown and dark brown at the origin of the infection. The gradient of colour, created by colonising algae and small organisms, is a typical clue that the disease is progressing. Recently killed areas are white, areas killed a few days prior are starting to get overgrown, and areas killed weeks ago are completely overgrown.

White syndrome is caused by a range of pathogens and is quite common, especially when corals are stressed by abnormal temperature and high levels of sedimentation. The disease can progress rapidly with a rate of tissue loss up to 20mm/day. It is most common on plating Acropora but can affect a wide range of coral genera. 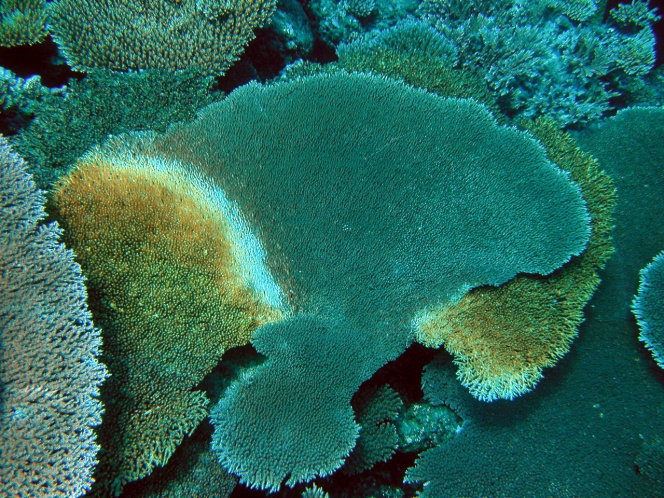 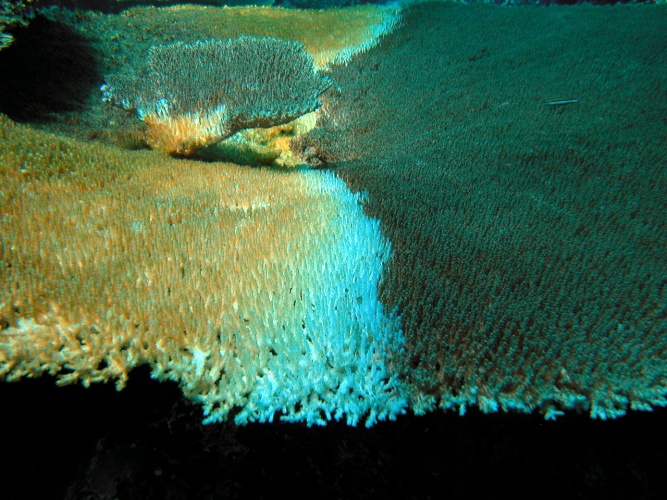 Skeletal eroding band disease – caused by small black ciliates. These ciliates eat the coral tissue and burrow themselves in the skeleton, thus forming a band of black speckles as they eat their way across a coral colony. The band of black speckles is at the interface between dead and living coral tissue. The band can be greyish to blackish depending on the ciliate density. This disease has a relatively low progression rate with coral tissue loss varying from 1 to 6 mm/day. It affects a wide range of families but is very common on Pocilloporidae. 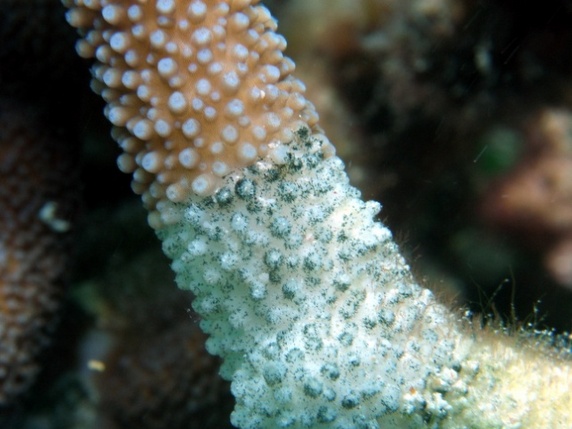 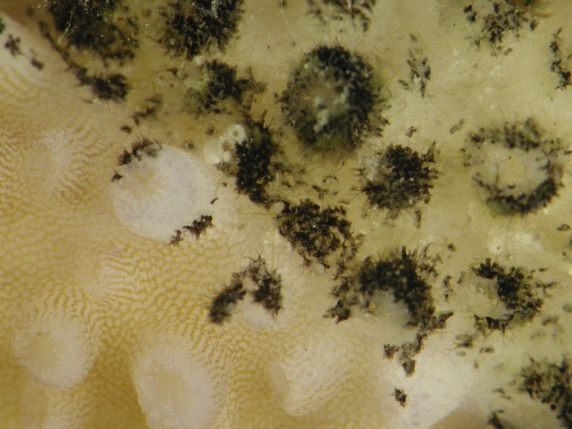 Black band disease – characterised by a more solid and dense black line at the disease front. The band consists of a consortium of bacteria and filamentous cyanobacteria. The exposed skeleton is white with no speckles. Black band disease progresses a little bit faster with a rate of tissue loss up to 8mm/day. It affects a wide range of families. 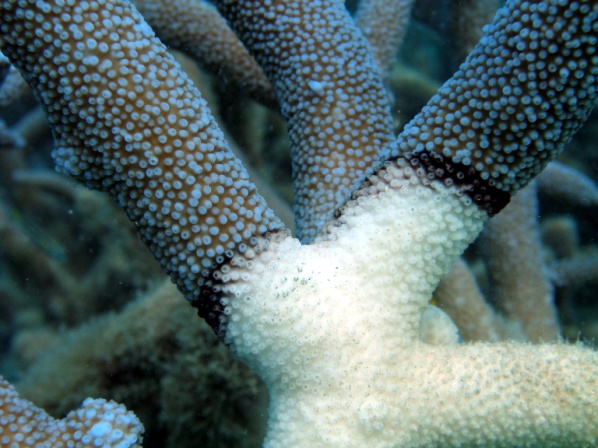 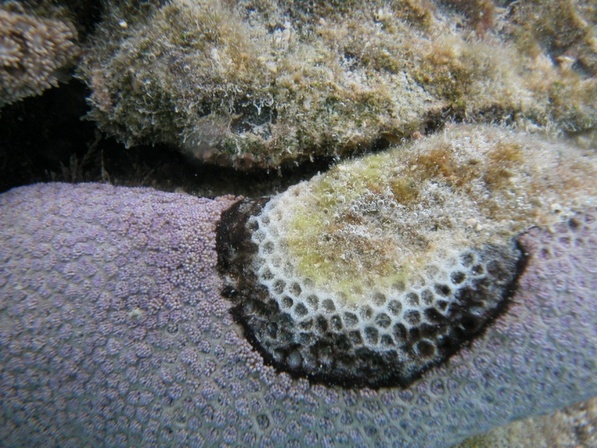 Brown band disease – the disease front has a characteristic brown band made up of microscopic ciliates. The intensity of the brown colour varies with ciliate density. These ciliates eat the coral tissue without burrowing in the skeleton and thus do not leave speckles behind. Brown band disease is very common especially on Acropora corals. It has a rapid rate of progression varying between 20 to 100 mm per day. 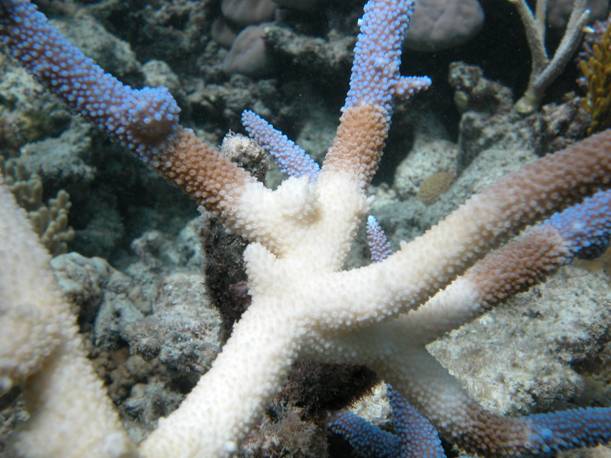 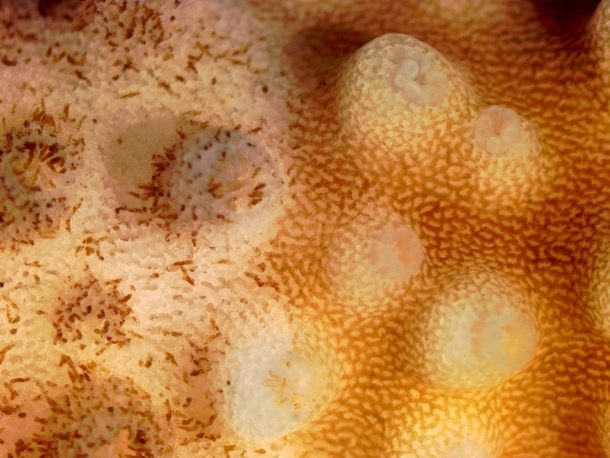