On 21 January at around 9pm, some of our guests had an exciting beach encounter … with a nesting Green sea turtle! Our marine biologists were quickly mobilised, and we were lucky to observe the turtle as it laid eggs. Unfortunately, the nest was situated too close to the water’s edge, so we relocated all 110 eggs further up the beach, beyond the reach of the high tide.

The turtle eggs look like soft-shelled ping-pong balls, so we handle them with extreme care. We dig the new nest to approximately the same dimensions as the natural one, and once covered with sand, we fence-off the area to prevent foot traffic.

It is known that sea turtles will often return to the same beach to lay eggs over subsequent days, approximately 10 days apart. And sure enough, we think it was the same turtle that returned three further times to lay eggs. Although we did not witness the actual nesting events, the turtle tracks and nests were spotted on the beach the following day.  Incubation of all four nests will take approximately two months from the laying date.

Upon hatching, baby sea turtles are thought to ‘imprint’ to recognise their environment – smell, low-frequency sound, magnetic fields, ocean currents and maybe even the stars. And then as adults, sea turtles are thought to navigate by using the earth’s magnetic field to determine latitude and longitude, to return to the same beach to lay their eggs.

The gender of turtle hatchlings is determined in the egg by the nest temperature and water content (new research paper) – mostly females from warmer/drier nests, and mostly males from cooler/wetter environments. 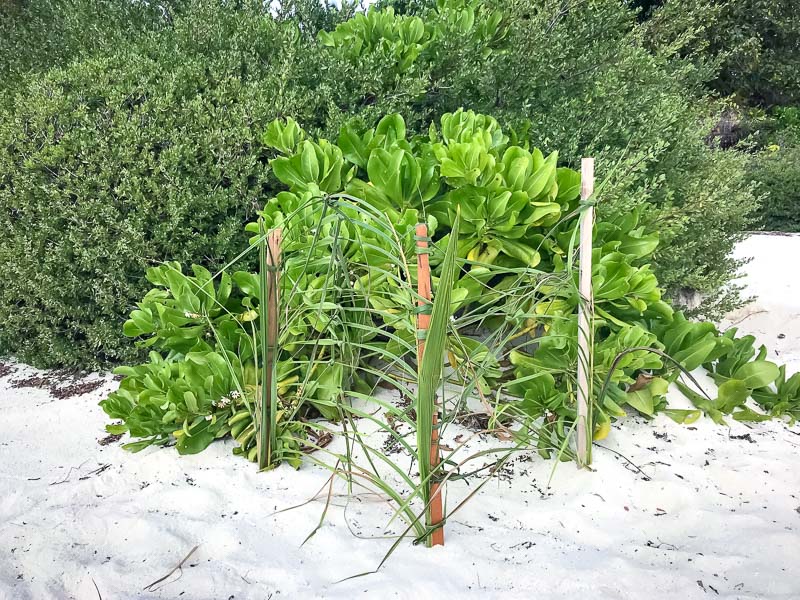 Nest #2 was laid close to vegetation 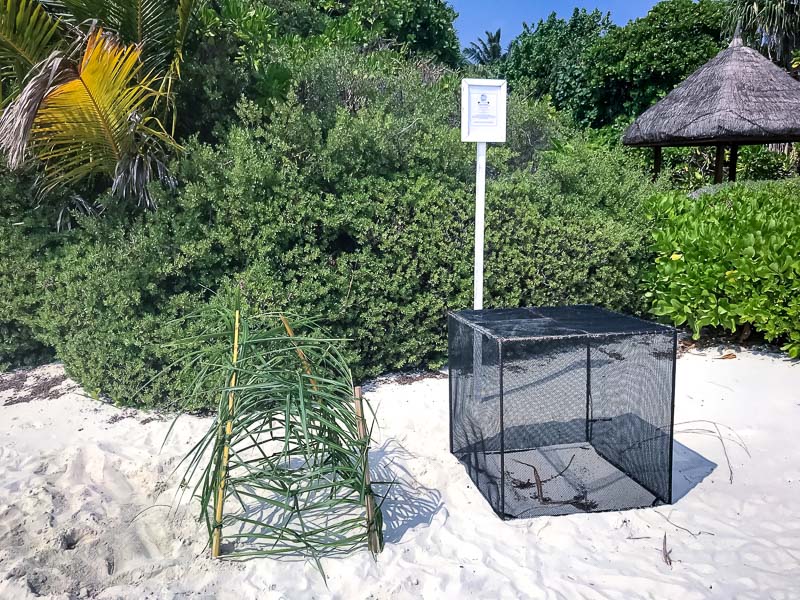 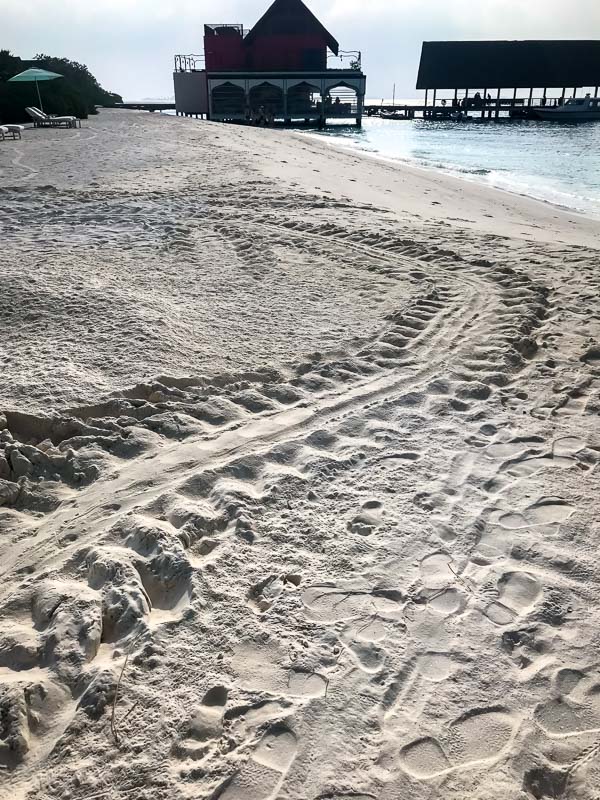 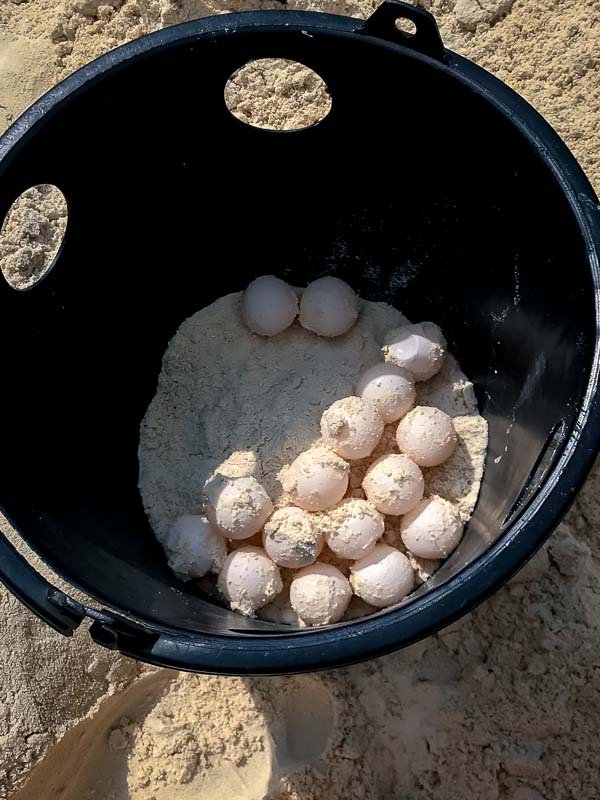 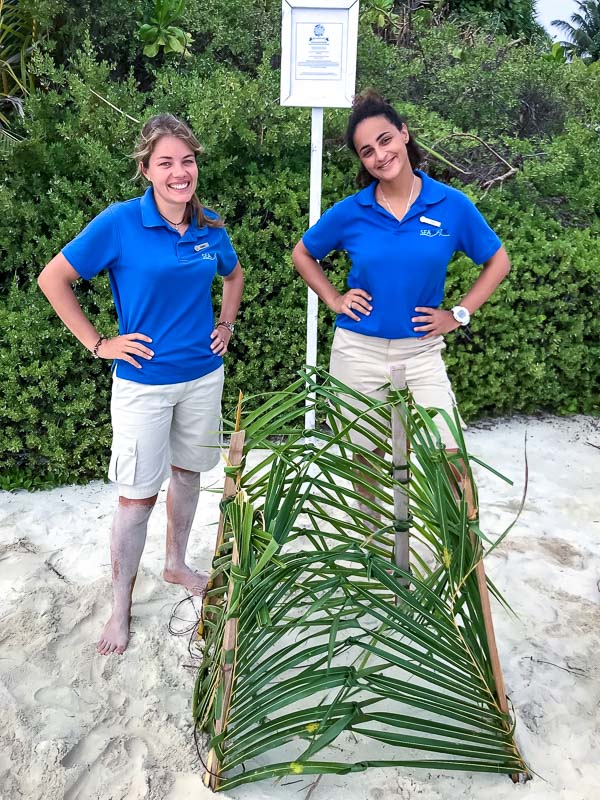 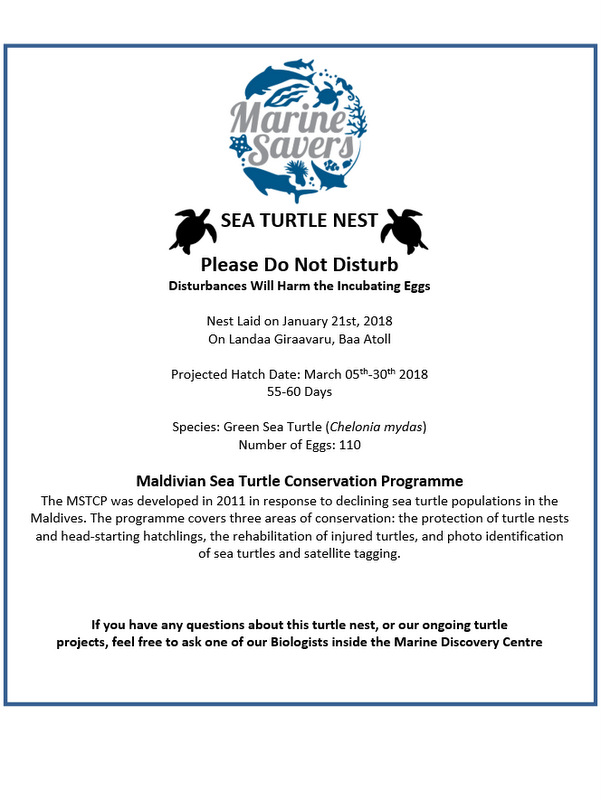 We are now monitoring their recovery process, starting by increasing the light inside the tank (but no improvement was seen). The next step will be to expose them to sunlight to see if they can recover their zooxanthellae and regain their healthy natural colouration.

In order to increase our knowledge of wild Maldivian reef anemones, we have started a health assessment at various sites around Baa Atoll. Since November, we have collected data for 63 anemones sighted across 5 different reefs; 12 anemones were pale in colouration (some bleaching) and were tagged to follow their bleaching progress over time. All our data will be shared with the Naifaru Marine Centre, which is working closely with the Australian ‘Saving Nemo’ organisation. 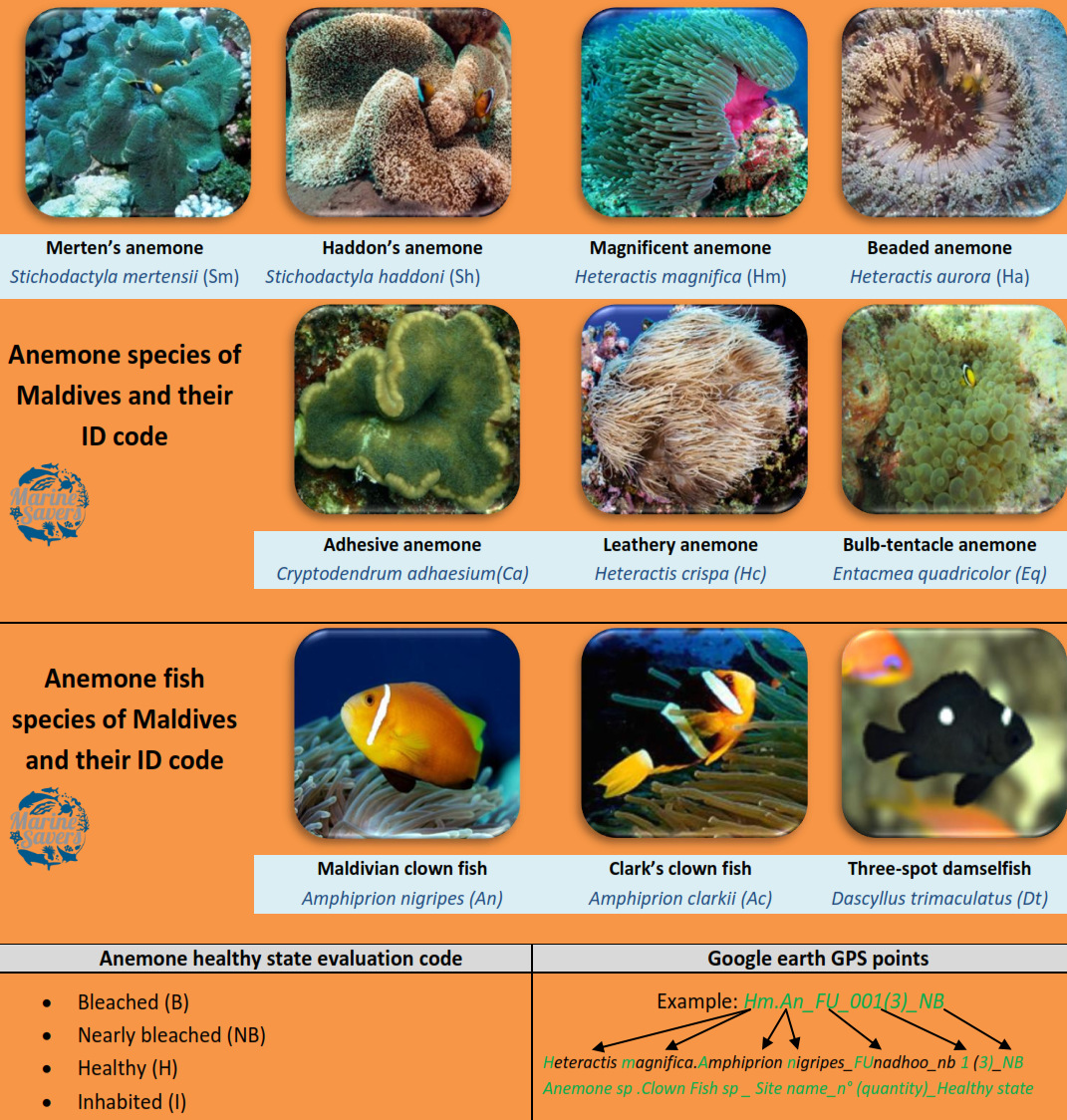 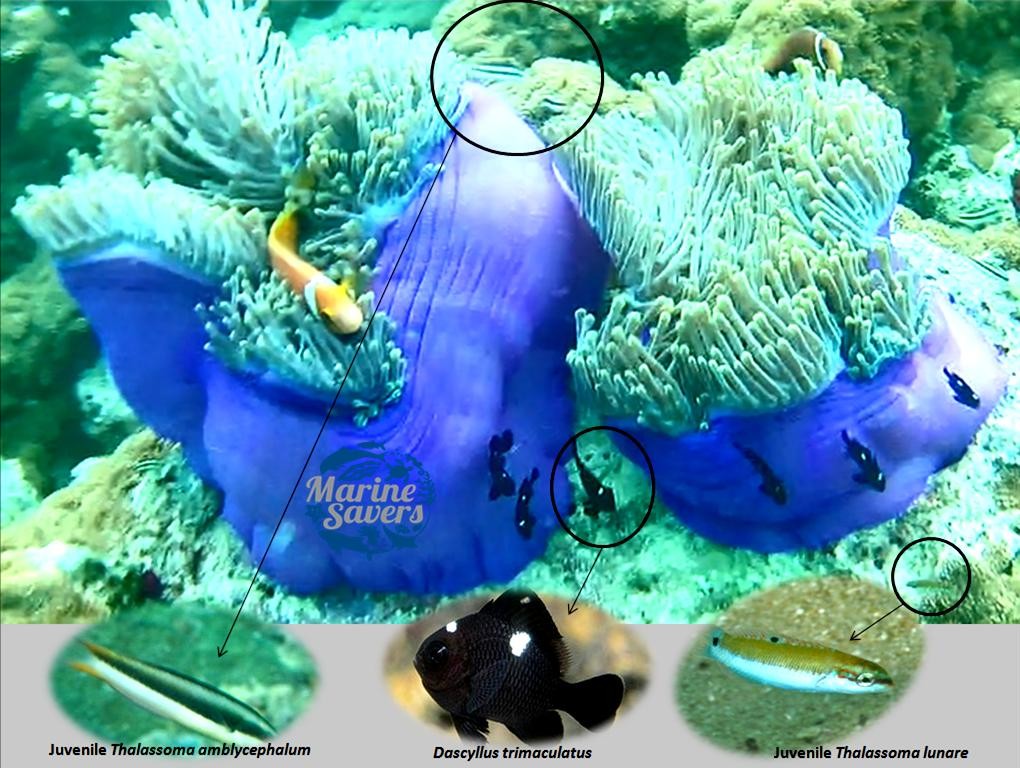 We have been continuing the experiments started last September by Jean-Gabriel, increasing the food intake of our Clownfish breeding pairs, to get better quality eggs and larvae. We have successfully extended the larval lifespan from 8 days, and now most larvae survive past the 16-day mark.

The seasonal monsoon ocean currents and wind patterns have brought many ‘ghost nets’ (discarded fishing gear) into Maldivian waters, carried across the ocean from neighbouring countries (India and Sri Lanka, we think). Ghost nets are a particular problem for the Olive Ridley species of sea turtles, which are otherwise only rarely seen living in Maldivian waters. The turtles become attracted to the drifting debris looking for food, and can easily become entangled in the net filaments (meet our current rescue turtle residents).

We have been finding some seahorses and even a frogfish hitchhiking their way across the ocean in the drifting nets, and have welcomed a few new arrivals into our Fish Lab. The seahorses have voracious appetites, so we have been hard at work tripling our production to grow enough Artemia brine shrimp to feed them.

The production of phyto and zooplankton is at its peak – a monthly total of 1525L of the micro-algae Nanochloropsis and Tetraselmis.
Daily we have maintained:
– 120L of micro-algae,
– 80L of rotifers (8.1*107),
– 400L of Artemia for Seahorse food. 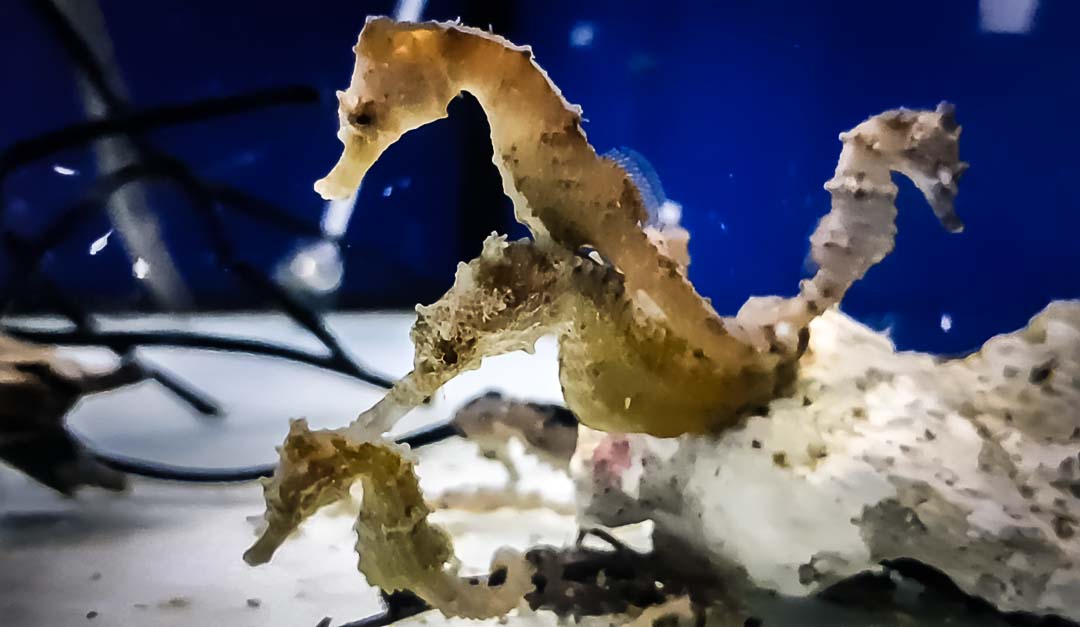 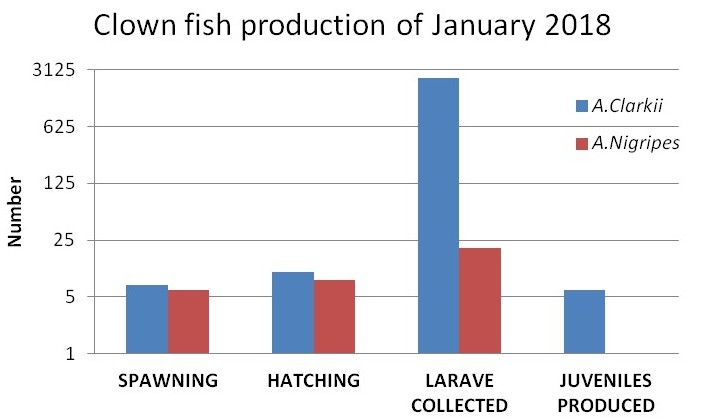 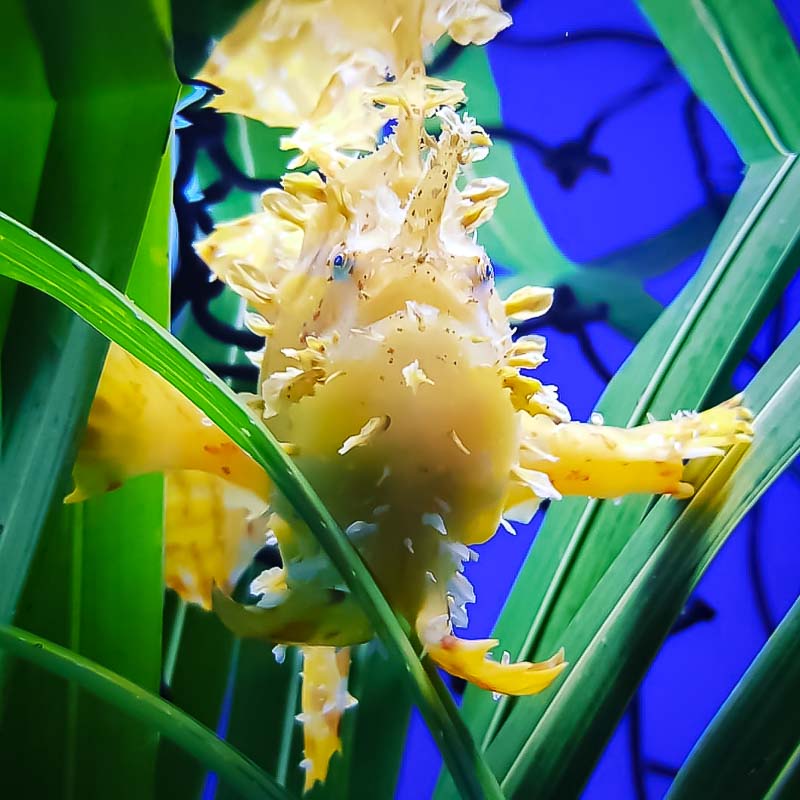 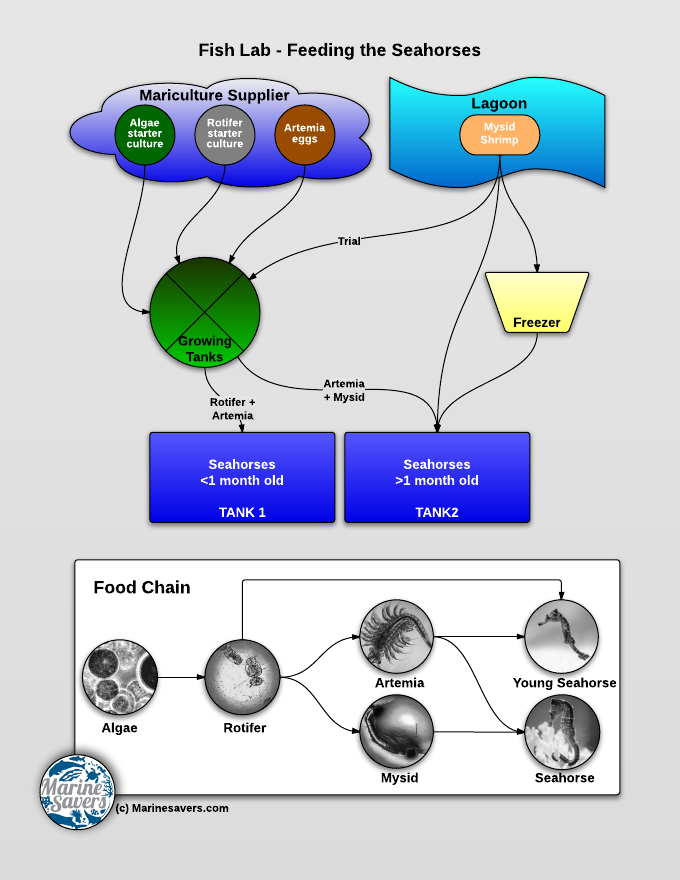