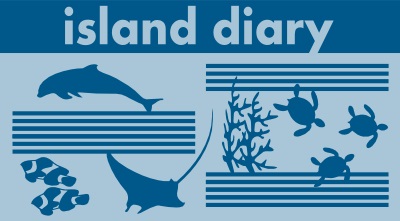 During today’s Sunset Dolphin Cruise, we were following a pod of spinner dolphins when we noticed a large object floating at the surface. Upon closer inspection, we discovered it was a large male Olive Ridley sea turtle that was struggling to dive with its lone front flipper. After observing the turtle to make sure it was not just resting at the surface, we decided it was best to bring him back to Kuda Huraa.

Closer examination by our turtle biologist shows no obvious recent injuries, however he has undergone a previous amputation of his front right flipper, which has healed. We have named him ‘Buddy’, and will keep him at our Centre until we can determine the cause of his apparent buoyancy problem, and ensure he is in good health.

We will be monitoring him closely, and as soon as Buddy is able to dive, we shall release him back into the ocean. 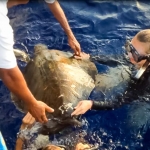 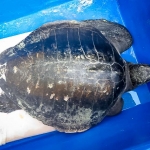 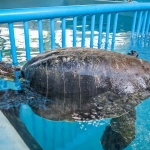 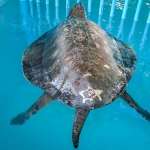 On 28 February, a critically injured juvenile Olive Ridley sea turtle was transferred to Kuda Huraa from Maalifushi, after being rescued and cut free from a large ghost net. She had suffered deep lacerations to all four flippers, and an abrasion to the carapace exposing a rib.

On 2 March, she underwent an amputation surgery to remove a rear flipper, which was swollen and necrotic due to constriction of the limb by the net. She is currently resting out of the water, receiving fluids and antibiotics. We are also caring for the wound – flushing the area, and applying honey as an antibacterial/antifungal.

A big THANK YOU to the Marine Sports Centre crew and Maesha Muhammad of Maalifushi by COMO, for rescuing the turtle and arranging a quick transfer. 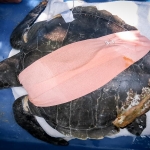 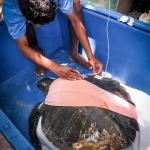 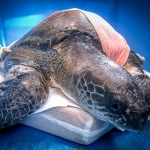 recovery out of the water