Fishy Tales: from Lab to Aquarium to Ocean

During December, we saw three new spawns from our Maldivian Clownfish (Amphiprion nigripes) and four spawns of Clark’s Clownfish (Amphiprion clarkii).
By the end of the month we had 345 Clark’s Clownfish juveniles and 110 Maldivian Clownfish juveniles, with another three tanks of larvae, which we hope to display under glass during January. It will be the first time in eight months that we have reached this level of success, thanks to improvements in our Fish Lab protocols and developing expertise. 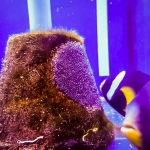 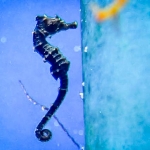 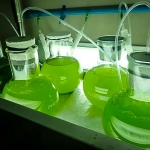 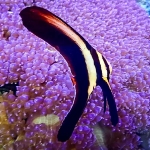 We recently added four juvenile Teira batfish (Platax teira) to our large aquarium at Landaa Giraavaru. Also known as the ‘round-faced batfish’ or ‘longfin spadefish’, it grows up to 60cm in length and is sometimes traded as an ornamental aquarium fish. Viewed from the side, it has a characteristic circular body and is silver/grey/brown in colour, with a dark band through the eye and dark blotches near the pectoral and anal fins.
Platax teira is an omnivore, eating plankton, small invertebrates and marine algae in relatively shallow waters. They are a peaceful and social fish, and should not be kept with aggressive species in an aquarium.

At Kuda Huraa, we have recently re-developed one of our tanks due to a problematic leak. We created some protected ‘cave’ areas for shelter, and once the environment stabilised began to introduce more fish species: Powder blue tang, Blue damsel fish, three-spot damsel fish, Maldivian anemone fish, Humbug dascyllus damselfish, White tail surgeonfish, a long fin fang blenny. Our Maldivian anemone fish recently laid a set of eggs, indicating they are happy with their new home ! 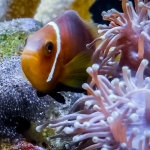 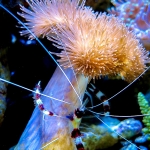 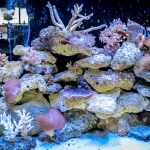 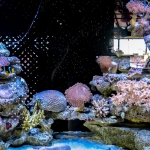 During our various guest excursions and activities this month, the various megafauna sightings for December included: 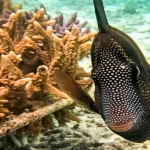 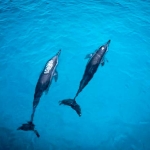 Spinner Dolphins breathing at the surface 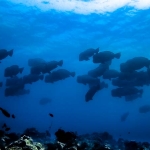 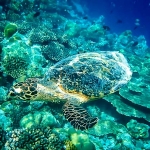 Hawksbill Turtle swimming near the reef at Madhirivaadhoo

Thanks Matt, for the great videos !