On 15 November, three Green turtle hatchlings (Chelonia mydas) were collected from a nest at Fihalhohi Island Resort, and we received them a week later into our Head Start programme at Kuda Huraa. Standard treatment procedures were followed for possible Grey Patch disease, using isolation pools and iodine baths. All three hatchlings numbered G81, G82 and G83 weighed 20g, and straight carapace length ranged from 4.6 to 4.8cm. 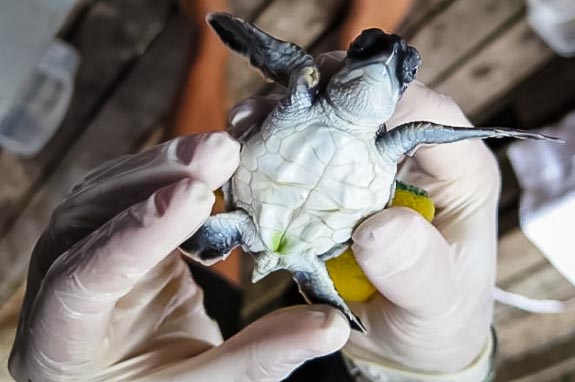 ‘Pat‘ (G68) passed a final health check during November, measuring 30.8cm in straight carapace length and weighing in at 4.9kg. He was released on 12 November at Velaa Faru, N.Malé Atoll on a Marine Life Safari excursion. 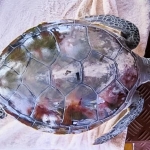 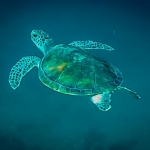 Pat released into the wild

We currently have six Olive Ridley Turtles (Lepidochelys olivacea) in our Rehabilitation Centre at Landaa Giraavaru.

Our long-term rescue turtles Zahiya, Peggy and Ossy are still suffering from buoyancy syndrome, meaning they are unable to dive down to the bottom of our recovery pools to look for food. They are otherwise very healthy, are not being treated for any ailments, and have healthy appetites.
Lefty’s beak is still damaged but is starting to heal. She has been resting on the bottom of the pool several times this month, and we are encouraging diving behaviour at feeding times to control her buoyancy.
A specialist marine veterinarian from Singapore is visiting our Landaa Centre in December, for guidance on turtle health and buoyancy syndrome, and also to advise on our long-term resident Elsa (with missing front flippers). 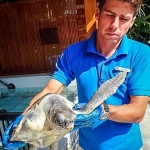 Kerry, our newest arrival, was found floating on the surface of the lagoon at Emboodhoo Finolhoo, by the marine biologist from Taj Exotica resort (S.Malé Atoll). She was covered in algae and barnacles, suggesting a long time afloat on the ocean surface.
Kerry is missing her back right flipper, possibly from previous entanglement in a drifting fishing net. Turtles are often attracted to floating marine debris whilst searching the open ocean for food, but unfortunately can easily become entangled in ‘ghost nets’. Many turtles are known to die in this way from drowning, starvation or dehydration.
Kerry also has some issues with her front left flipper; it might have been broken and healed by itself. Once she is confident at diving she will be released back to the sea.
Over time, we have observed that Kerry has become increasingly fussy about food – she no longer eats lobster, prawns or fish. At the start of November we started feeding her squid, but she has now stopped eating that too. We have noticed her spitting out some food out after chewing, perhaps due to a throat infection. As such, we are now experimenting with different parts of the squid to see if certain parts are more palatable. We will continue to monitor her progress. 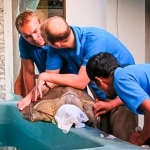 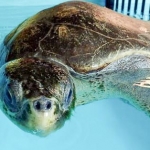 We are currently tracking one Green turtle – ‘Hendrix’ (blue line) who was released with a satellite tracking device on the 14/09/2014.
He was initially travelling NE towards the west coast of Sri Lanka, and now seems to be headed in a SE direction towards the Maldives.
UPDATE: We have unfortunately lost the signal from Hendrix, and think he may have been caught up in a fishing net off the coast of Sri Lanka. 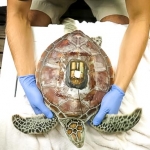 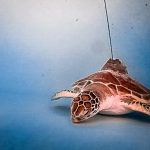 Hendrix acclimatizing to the extra weight