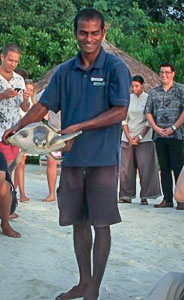 PEGGY, the juvenile Olive Ridley turtle with a missing flipper, was finally released by Kuda Huraa’s MDC staff on 30 December. After six months of rehabilitation she managed to overcome her buoyancy issues and gained enough weight to be returned to the ocean. Her release proved to be a popular event for the guests, and we were on hand to answer their questions about Peggy and sea turtles in general.

NOAH, one of our hand-reared hawksbill turtles (released with a satellite tag in November) was spotted again in the Coral Gardens on two different occasions in December. He seems to be staying within the local area and was observed by divers both times, although the latest satellite data shows he is now travelling towards the west side of North Malé atoll.

NELITA is the only rescued turtle currently in residence at our Kuda Huraa turtle facility. She is making good progress, shows no buoyancy problems, and is free from any disease or infection. We are continuing to monitor her health and weight, and hope to release her later in January. 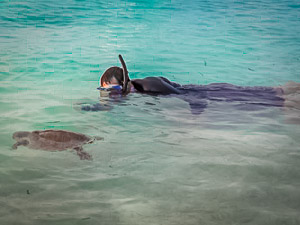 ELISA is a juvenile Olive Ridley turtle found drifting near to Landaa’s sandbank on September 29, holding onto plastic debris. She was recovered in an exhausted state and brought back to the Marine Discovery Centre by the Recreation team. She has a 54cm carapace, weighs 13kg and is missing her front left flipper; the amputation site is totally healed, indicating an old injury. Her buoyancy problems have improved this month so she may be ready for release soon.

ZAHIYA is a mature female Olive Ridley found floating near Landaa’s water villas in March 2012. She has a healthy appetite and has gained more than 5kg since being rescued. Her floating syndrome, however, has not improved, so it will not be possible to release her any time soon.

You can read here about UNO, our most recent Olive Ridley rescue turtle – sadly now left with a single flipper – and catch up with both SAMSY (our largest Olive Ridley, now released) and BOBITA, (Landaa’s other resident turtle guest who arrived by seaplane from Kuda Huraa).

Special thanks go to Liraz, who joined the Landaa team from Kuda Huraa for a few weeks in December. Thanks to her specialist expertise in turtle rescue, we have been able to improve the turtles’ diets and prescribe new medicines to help with buoyancy problems.

We are currently satellite-tracking 3 of Landaa’s turtles (see map) :

OLIVER – released in September 2012, he first travelled to Sri Lanka before returning to the Maldives with the new monsoon season (change in winds and currents). He has travelled over 3,000km in 96 days, at an average speed of 31km/day.

CHIPPY – is currently in the Arabian Sea, heading north-west towards Oman. She is swimming 28km/day and has covered 1500km since her release in mid-November 2012.

SAMSY – was released on December 17 and is currently near the Lakshadweep islands after travelling an incredible 721 km! At 51km/day, that’s almost twice as fast as the other turtles, however we mustn’t forget that both Oliver and Chippy have a front flipper missing, whereas Samsy has all four of hers intact.